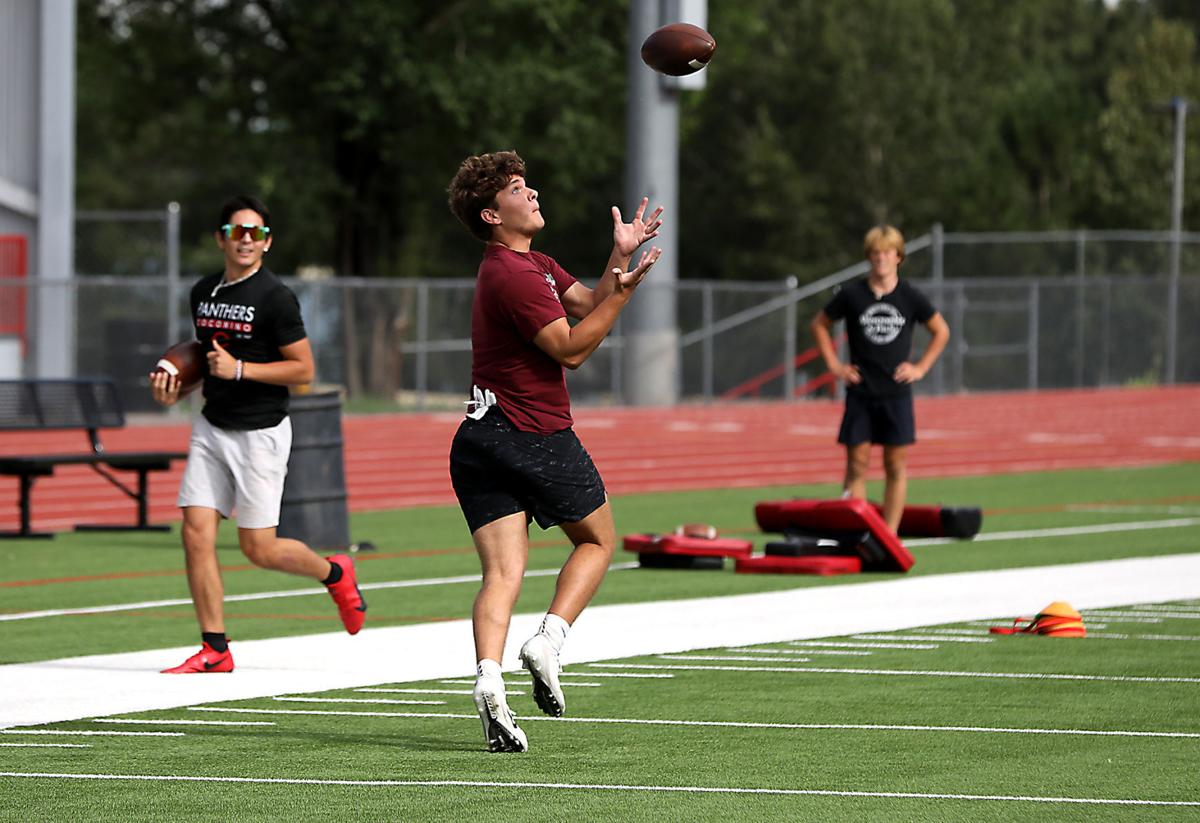 Tyson Fousel waits for a pass Wednesday afternoon after running a route during practice with the Coconino football team. 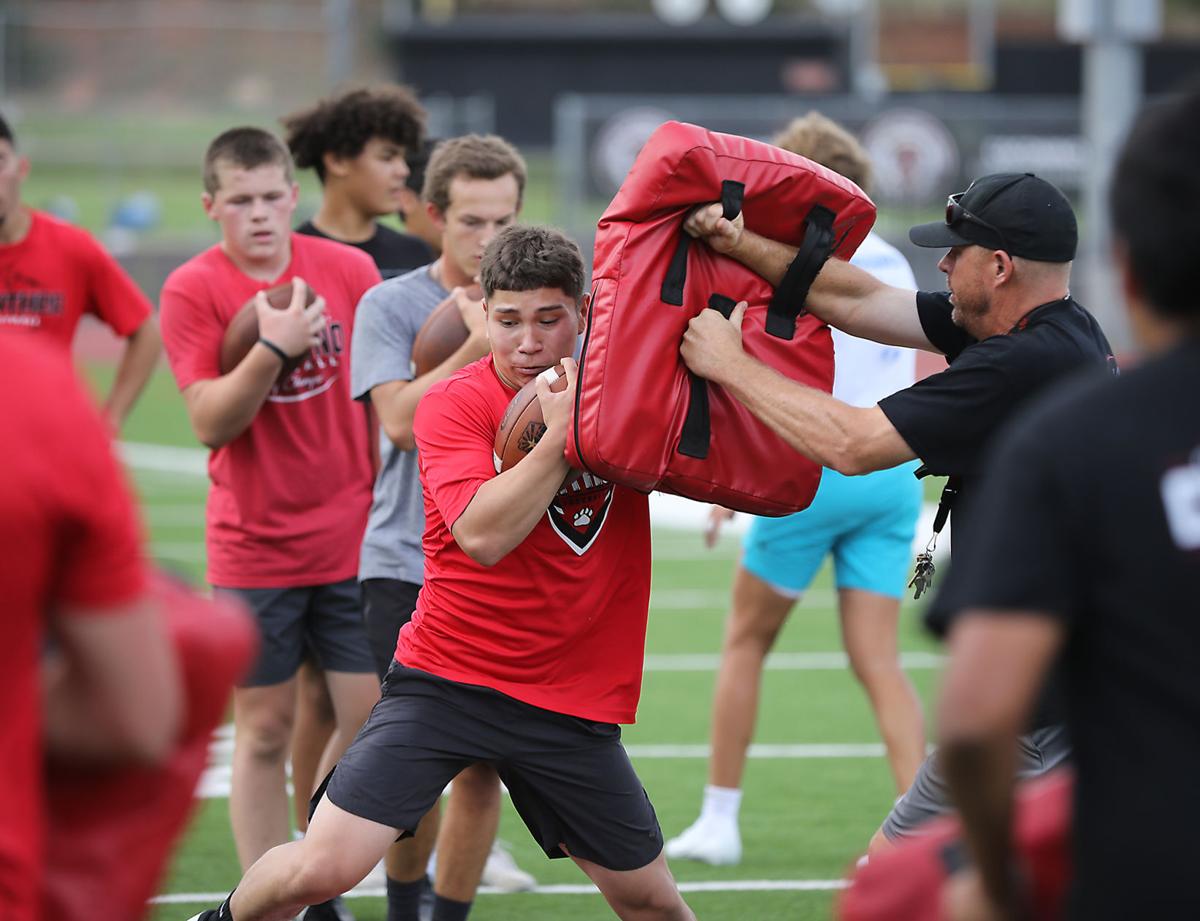 Christian Conde runs a drill Wednesday as he practices with the Coconino football team. 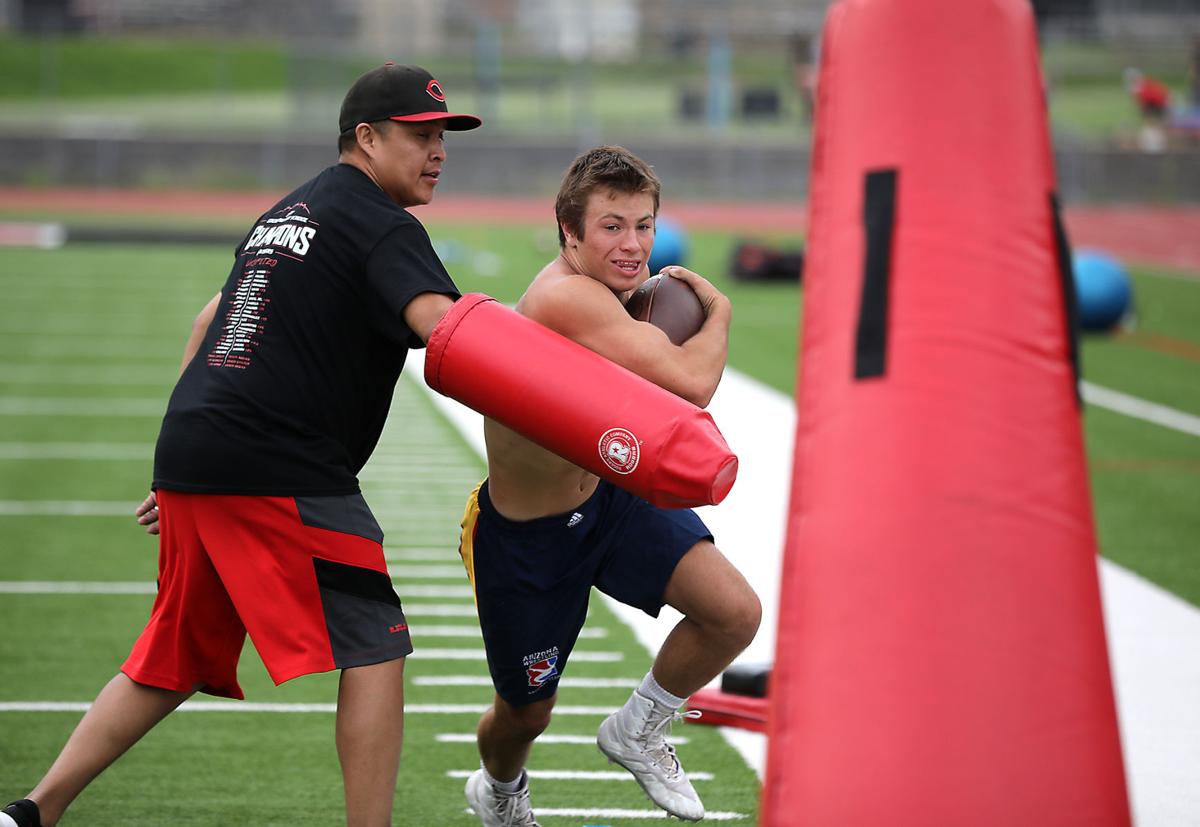 Cooper French runs a drill Wednesday as he practices with the Coconino football team. 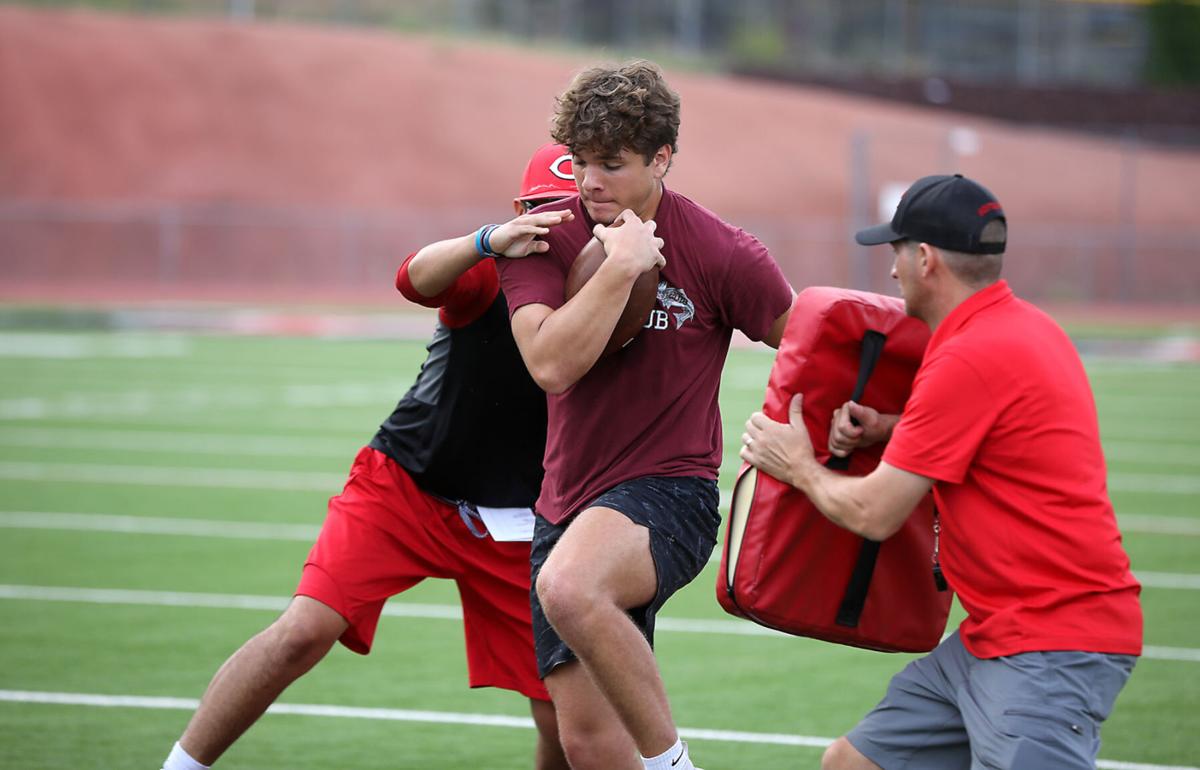 Tyson Fousel runs a drill Wednesday as he practices with the Coconino football team.

When the Coconino Panthers concluded the football season last fall, it appeared there would be a major hole in the team’s offensive game.

Zach Bennett rushed for more 1,200 yards and scored 15 rushing touchdowns in nine games last season, garnering him 4A Conference Offensive Player of the Year as the Panthers reached the playoff quarterfinals.

The returning Coconino rushers will look to make up for that production in a collective effort.

“We have a big hole to fill, but I think we’re capable of it. It won’t be solely on one person to do everything,” said Tyson Fousel, a rising senior who ran for 593 yards and five scores himself last season.

Fousel is one part of a running back quartet -- with Christian Conde, Jonathan Jaramillo and Cooper French -- that Panthers head coach Mike Lapsley expects to divvy up the carries and other responsibilities on the field.

Since spring practice began at the end of the 2020-21 school year, each of the running backs has worked in practice to secure their spot in the starting lineup. Lapsley said each of the four has watched film of Bennett and other successful rushers and attempted to emulate some of those skills.

Each of the current running backs also watch each other in individual drills, offer tips and sometimes even try to “one-up each other.”

The four players realize they are teammates first, though, and recognize that the success of their partners in the backfield bodes well for not just themselves, but the team’s overall production.

“Sure, there’s competition to be the starter, but we’re not fighting. It’s all teamwork and we all want each other to succeed. Whoever is getting the most carries, we’re still going to root for each other,” French said.

Lapsley said regardless of who is deemed the starting back, each will have a role in the offense, depending on matchups and the game plan for a particular week.

He said each player has their own skills unique from the others, based on size, strength and other physical abilities.

“Their role in the backfield is constantly evolving. Each is showing me something different almost all the time, so figuring out where to put everyone when is the challenge as a coach,” he said.

“It’s going to be a whole bunch of different players rotating in and out, guys doing things they hadn’t before to get more in-depth in the chart and playbook,” added Jaramillo.

Regardless of who breaks away from the pack, there are high stakes for all the returning players on the Coconino football team. The Panthers are back-to-back defending Grand Canyon region champions and will look to have sustained success. Much of that will lie in the hands of the Panthers’ rushers, as they look forward to the team’s first game on Sept. 10 against 4A runner-up Cactus.

“Right now it is all about progress for us, and giving thanks to our linemen to allow us all to do our own thing and get yards and touchdowns,” Conde said. “We all want to win a state championship so we have to do our own part.”

Is Sean Payton an early frontrunner for Coach of the Year?

Flagstaff volleyball gained and lost momentum several times Thursday, but did just enough to escape with a 3-2 win over Seton Catholic at Flag…

Approaching its third game of the season, Flagstaff Eagles football has not yet had a traditional week of preparation for a game. After a Thur…

NAU's game in Tucson a homecoming for local players

Coconino Panthers football will finally take the field Friday, barring any more complications, in their first game of the 2021 season, when Co…

Northern Arizona football faces a new challenge Saturday when it heads to its second straight road game. The Lumberjacks will travel a few hou…

I started running the trails below the southern face of Mount Elden in 2013, when I moved to a neighborhood near one of the area’s trailheads.

Coconino’s scheduled football game against the Cactus Cobras for Friday at Coconino High School was canceled Thursday afternoon, according to …

Tyson Fousel waits for a pass Wednesday afternoon after running a route during practice with the Coconino football team.

Christian Conde runs a drill Wednesday as he practices with the Coconino football team.

Cooper French runs a drill Wednesday as he practices with the Coconino football team.

Tyson Fousel runs a drill Wednesday as he practices with the Coconino football team.