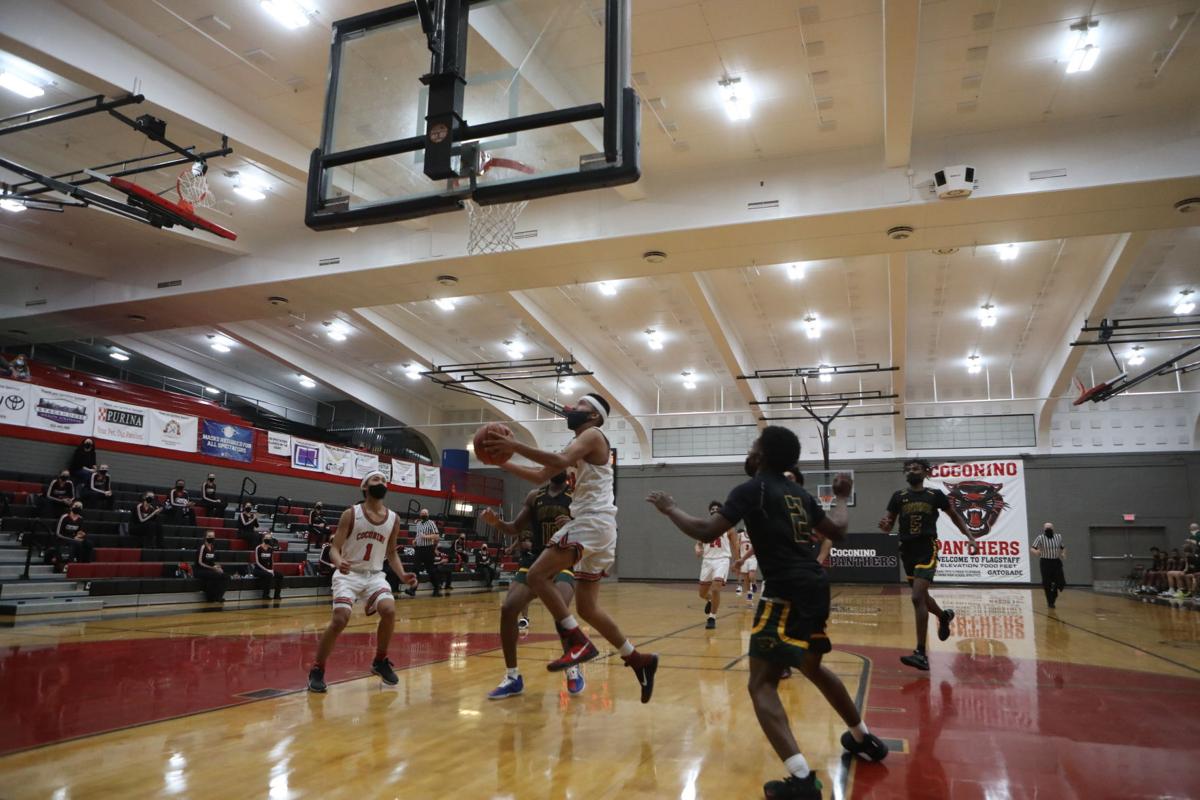 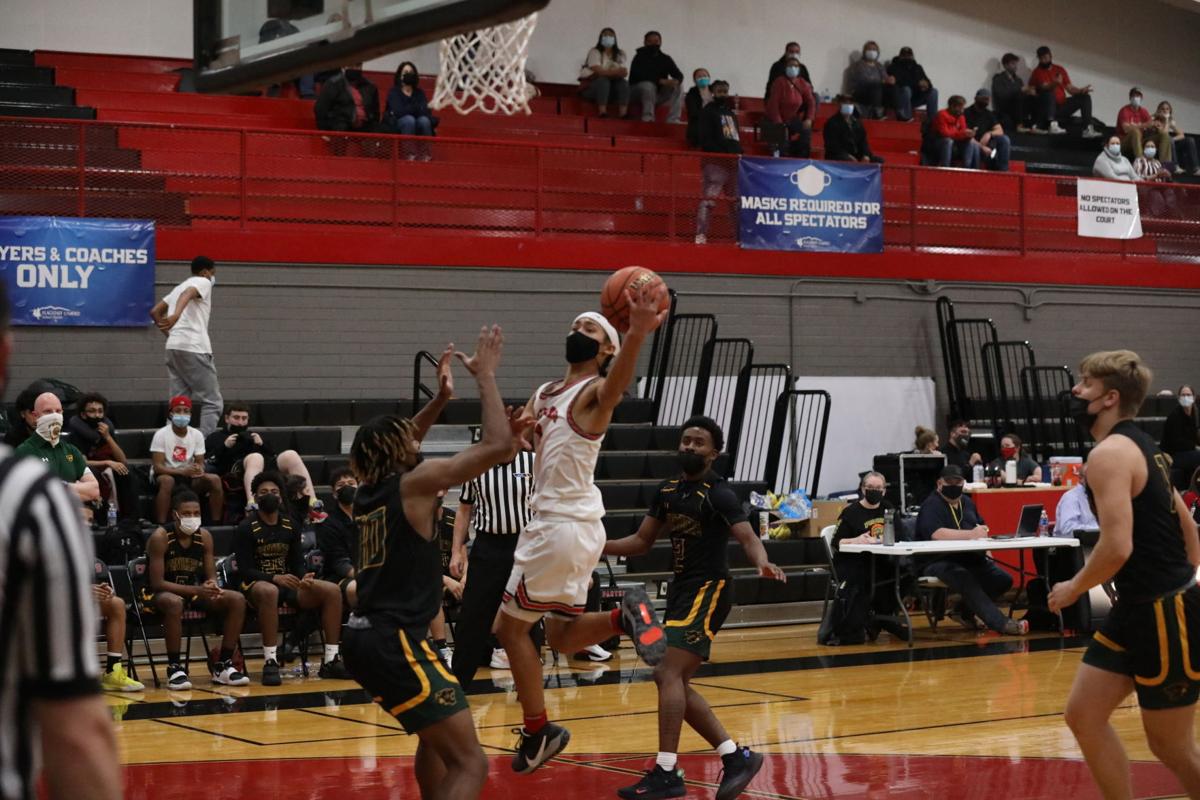 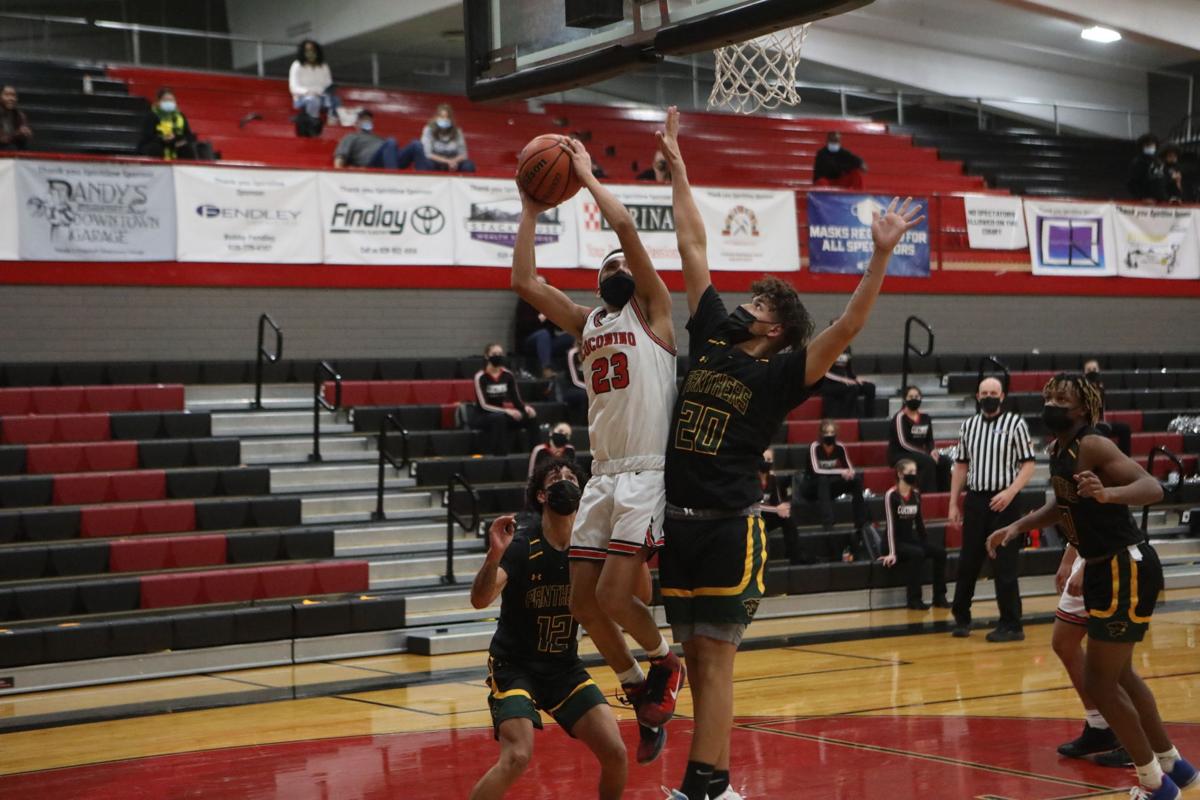 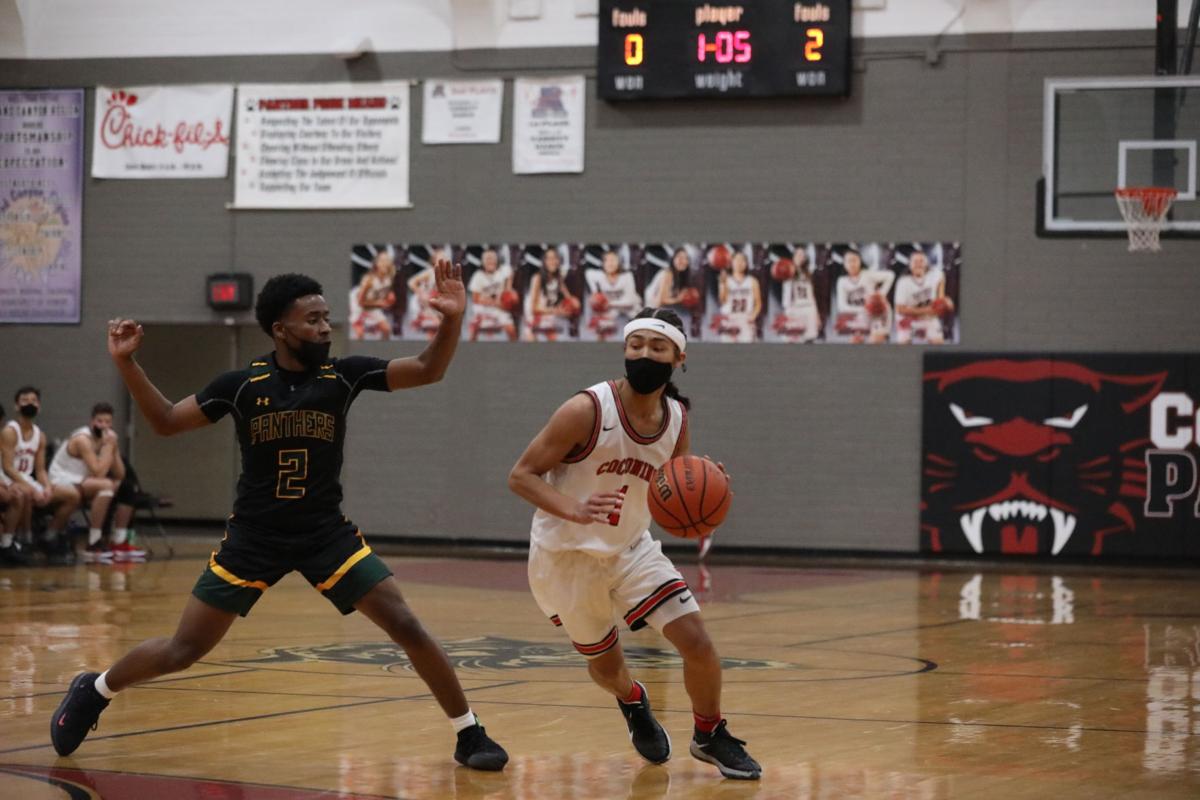 Coconino guard Preston Olney (1) gets by his defender Tuesday night during a home game. 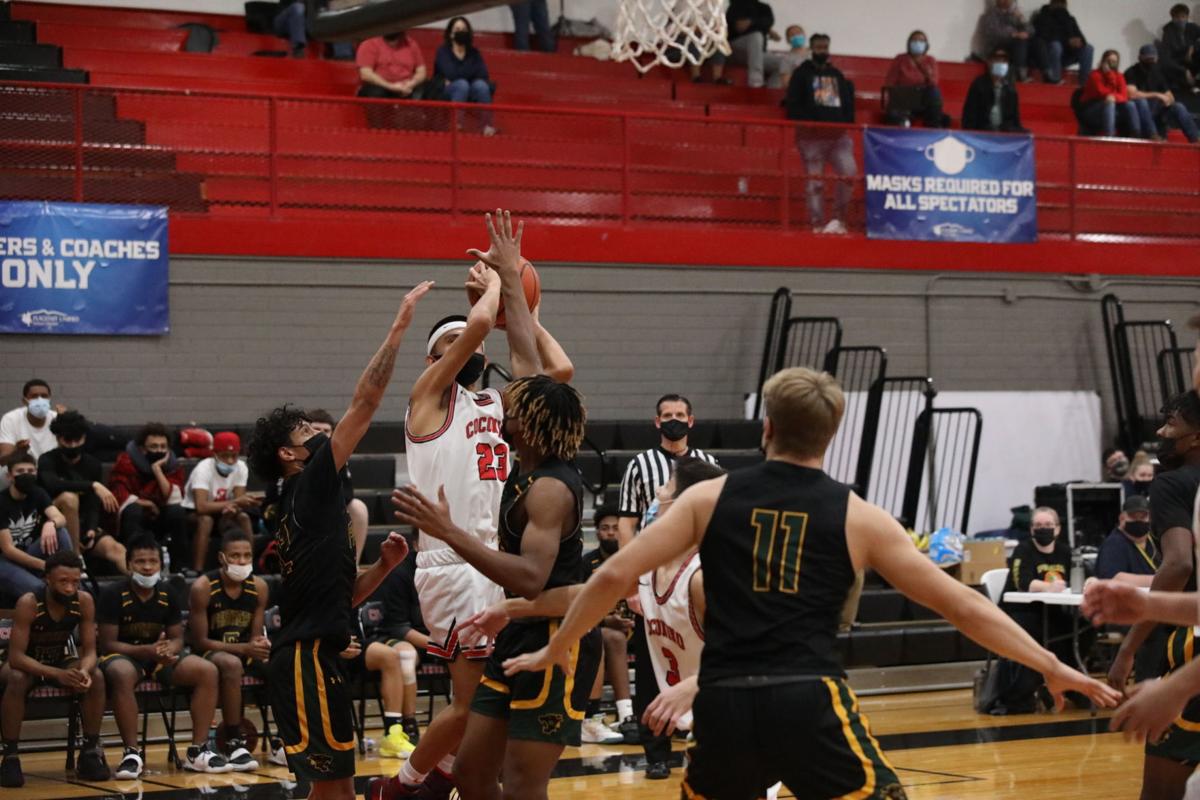 The fourth-ranked Coconino Panthers boys basketball team continues to make quick work of any 4A Conference opponent that steps on the court against them.

The Panthers stayed perfect with a 70-58 win over the No. 15 Peoria Panthers, the ninth in nine tries. The last time Coconino started with a lengthy unbeaten streak was the 2017-18 season when the team opened 8-0 in the regular season and finished 16-3 in the powerpoints slate.

Panthers guard Preston Olney led the way with 27 points on 6-of-13 shooting, adding three rebounds, one assist and one steal in the home victory. His running mate in the backcourt, Jacob Begay, also came out and dominated with 21 points on 8-of-15 shooting, and the tandem kept the offense rolling all night against Peoria.

The visiting Panthers came in with an injury to star wing Andrew Camacho, who missed the game. A season ago Peoria blew through the 4A en route to a runner-up finish in the state championship tournament. This season, following a big transfer and key graduations, Peoria is a bit down but still a dangerous team in the 4A.

Coconino at times made Peoria look like a team that won't make the playoffs.

Olney and Begay hounded the Peoria guards, forcing six steals between the two -- Begay with a monstrous five of the steals. Begay had a number of plays where he would pick a pocket or steal an errant pass and quickly dart down court for a bucket, or he would find a teammate for an easy layup on the break.

Or, as Panthers head coach Mike Moran would see it, exactly how the Panthers want to play with his undersized and dangerous team.

"As far as I'm concerned this is one of the best teams I have ever had," Moran said. " ... We are going to keep pushing the Carolina break; that's what we do, we have to do that. We got the shooters and we got to get it up and down like that. If they cut us to halfcourt and there is a big dude with hair on his back in there, we might have a problem."

The Panthers got up and down, getting their buckets in transition in a flurry at times. While Coconino hasn't had to play a team with a dominant post outside of Flagstaff's Nick Morrow, the pace at which the Panthers play has made up for the lack of size.

"Overall, it was a great night," Moran said.

Olney jump-started the night with a dominant and aggressive opening quarter. The 5-foot-7 senior guard hit jumpers, attacked the middle of the lane and drilled a 3-pointer en route to an 11-point quarter. Coconino led 21-13 following the first.

The second quarter was Begay's turn. He scored nine in a row -- hit a contested mid-range jumper, drilled an open 3, scored on a quick drive and took a steal coast to coast for a bucket to put Coconino up 41-30 with 1:30 left in the first half.

Peoria cut it down to 48-42 early in the third quarter, but Coconino had an answer. Olney hit Begay on a backdoor cut, leading to a three-point play for Begay. He missed the foul shot, putting Coconino up 50-42 midway through the third. The next possession Begay stole a pass and hit teammate Manuel Cardoza for a transition bucket and a 52-42 lead.

From there Coconino kept the Panthers at bay and the game never got back within single digits. The game was essentially put away after Olney hit four free throws in a row following two technical fouls on Peoria -- one on a player, the other on Peoria's head coach.

Olney and Begay combined for 48 points and impressed. It hasn't been common for both to go off for over 20, but Coconino is a hard team to beat when it does happen.

As a team the Panthers shot 18 of 30 from inside the arc and hit 6 of 17 from 3-point range in a hyper-efficient offense night. Begay and Olney hit five of the six 3s.

Coconino guard Preston Olney (1) gets by his defender Tuesday night during a home game.