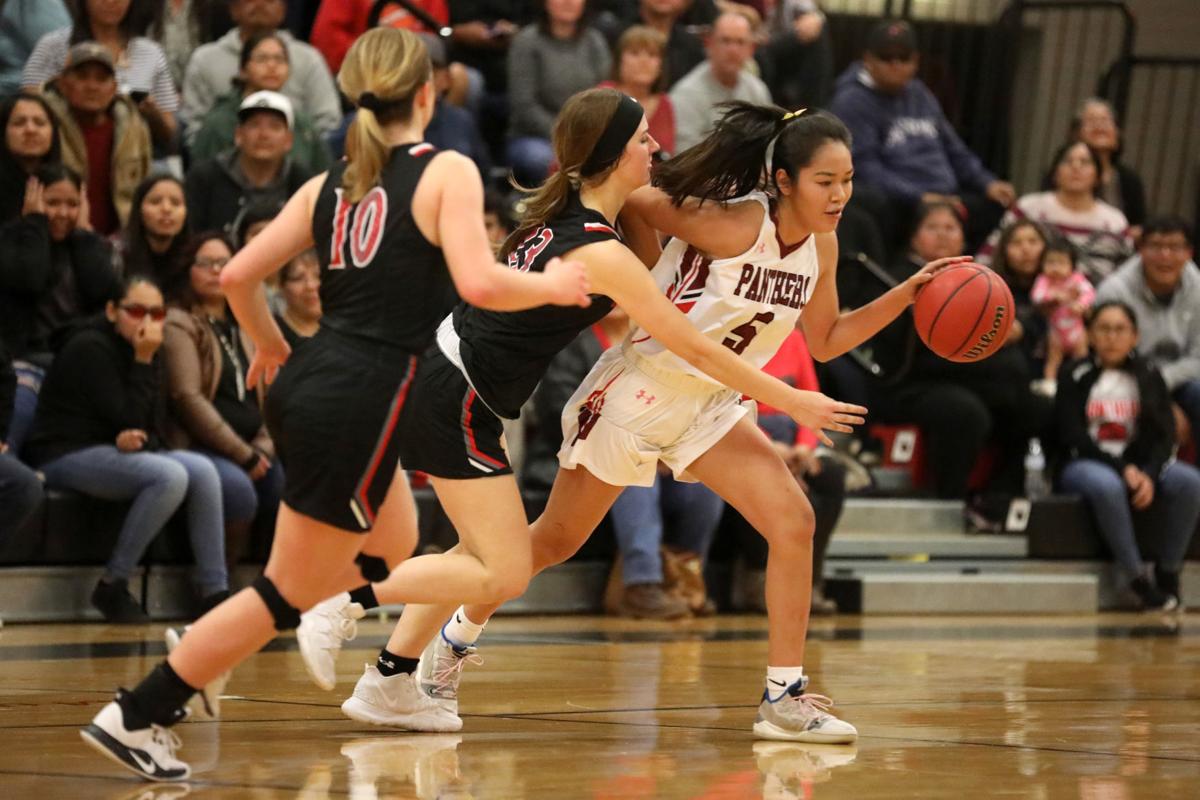 Coconino guard Kiana Manuelito (5) is fouled while trying to run the clock out during a game earlier this season against Bradshaw Mountain.

Coconino girls basketball head coach Martin Reyes has seen a bit of Dr. Jekyll and Mr. Hyde from his squad this year.

He said the Panthers sometimes just beat themselves and have had to battle through ups and downs during their 14-5, 10-2 Grand Canyon Region regular season, showing plenty of good to go along with some head-scratchers.

Through all the little peaks and valleys, however, the 12th-seeded Panthers host the No. 21 Poston Butte Broncos, who are coached by former Flagstaff Eagles hoops player Savannah Bix, Thursday night at Coconino High School.

The Panthers' focus heading into the Thursday 4A Conference play-in round is to make sure they don't get in their own way.

Coconino was just swept in the crosstown series against Flagstaff, which earned a top-eight seed and a play-in round bye. The Tuesday night loss saw the Panthers commit 38 turnovers and score just 28 points.

It also showed a bit of what Reyes explained -- along with the team's other recent upset loss to No. 21 Peoria. Reyes said it isn't because of a lack of effort from the Panthers.

"I love going to the gym this year, I love hanging out with those young ladies," Reyes said. "I know they are giving me everything they got."

The Panthers are young, as each of their top five scorers are either juniors or sophomores. The youth has a little to do with the struggles Reyes mentioned, but he added that there is another factor.

Reyes said the team has felt some pressure to live up to the expectations of past Coconino teams that saw postseason success, even though this team won 20 games when counting contests outside the power-points schedule.

"Girls before them have set the standard pretty high, so I think sometimes they feel the burden of that," Reyes said.

Reyes had a feeling the Panthers would end up drawing Poston Butte in the play-in round, going as far as to prepare some game film on the Broncos a few weeks ago.

"I had a feeling about three weeks ago out paths would meet," Reyes said. "I have about eight games on them and know them well. ... I thought it was gonna be them or Moon Valley, so I've been acquiring film on both. I know they like to press and pressure and force the tempo. They play pack line man-to-man, some zone when they look to trap certain places of the floor."

The Broncos try speed teams up and get them rattled, a strategy that makes sense considering Bix played in the Eagles' fast-paced program.

The Broncos went 9-9 overall and 4-6 in the Desert Sky, which Reyes called one of the toughest regions in the state. He has a point, as the three teams above Poston Butte in the region standings, Saguaro, Seton Catholic and Mesquite, all earned play-in byes.

The Broncos are led by an inside-out senior tandem of Taeylor Reece and Zulyann Correa. Reece has averaged 11.6 points and 7.1 boards this year while Correa is at 8.7 points, 6.5 boards and is shooting 35% from distance this year.

Tip-off is set for 7 p.m. at Coconino High School.

Coconino guard Kiana Manuelito (5) is fouled while trying to run the clock out during a game earlier this season against Bradshaw Mountain.