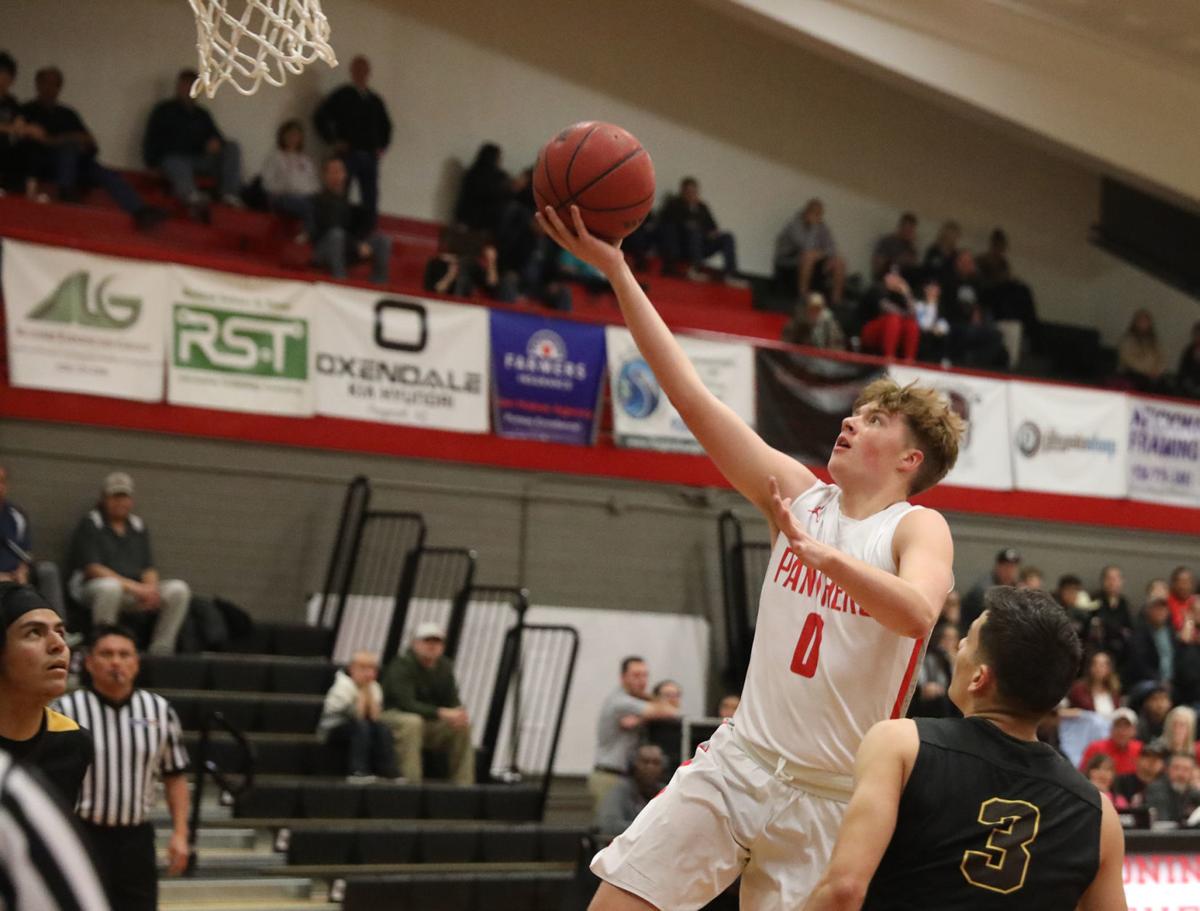 Coconino’s Anthon Watson (0) takes the ball to the net Friday during  a game against Marcos de Niza at Coconino High School. 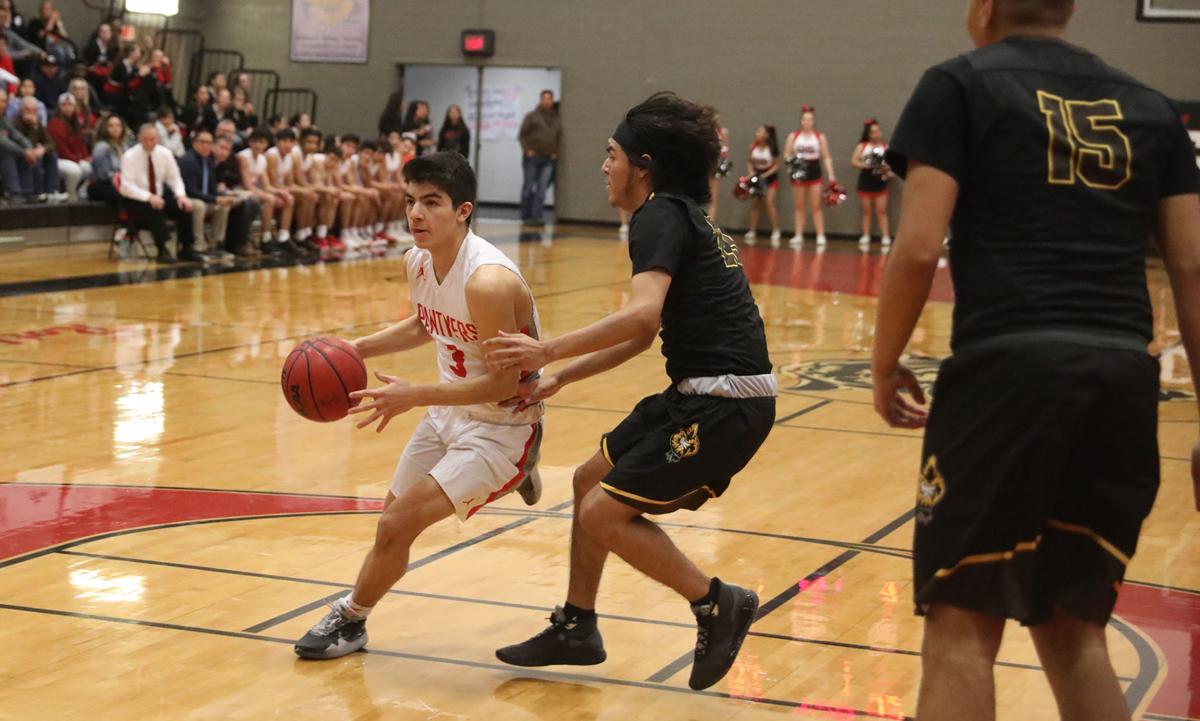 Coconino’s Mitchell Jacobson (3) drives with the ball Friday during a game against Marcos dd Niza at Coconino High School.

Coconino's play-in game against Marcos de Niza resembled a prize fight at times, the teams going blow for blow, but the hosts landed the bigger haymakers along the way.

“It’s a playoff game, so everyone is going to go hard. It should be like that,” Panthers guard Preston Olney said just outside his home locker room at Coconino High School not long after his team sealed the 65-63 win.

Olney finished with 22 points and made crucial free throws down the stretch, William Mcmenamin threw down a slam dunk that got the crowd roaring in the third quarter, and the 13th-seeded Panthers outlasted the No. 20 Padres in a 4A Conference state tournament play-in game Friday, punching a ticket into the championship bracket for the first time since the 2012-13 season.

“We just do what we do," Olney said. "We push the ball, and we play together and stay together."

The senior sparked a 13-3 Panthers second-quarter run with one of his four 3-pointers, and Coconino won the stanza 24-8 for a 39-28 lead at halftime. Panthers junior guard Jacob Begay recorded 13 points and added three treys, hitting two straight from downtown after Olney made his 3 out of the second-quarter gates.

"Preston and Jacob are our primary scorers," Panthers head coach Mike Moran said, "and I thought they played well. Preston is under a lot of pressure and he is leading us all the way.”

Coconino finished 9 of 20 from long range and went 10 of 12 at the free-throw line. But they committed 17 turnovers and almost let mistakes in the fourth quarter completely diminish a 12-point lead Coconino had early in the final eight minutes.

“We hung in there," Moran said. "We made too many errors, but survived it. And we made those free throws, which we’ve done all year."

Olney delivered a blow with 55.4 remaining in the game when he made good on a 1-and-1 trip to the foul line to make it 65-61 for the Panthers, who never trailed in the second half after surviving five first-half ties.

The Padres, who won their season opener at home in the Valley 53-52 over the Panthers, made it 65-63 and forced a turnover near the top of Coconino's perimeter with 12.4 seconds to play for a chance at taking the knockout shot.

Both teams scrambling, Coconino didn't allow a good look and Russ Lingruen's last-second contested jump shot went wide of the mark for the Padres, who had used a 8-0 burst in the fourth to close the gap even more tightly.

“We try not to foul, try not to give them any points, but not fouling was a big factor on that play," Olney said of defending the final Padres possession.

The Panthers missed the postseason entirely last year and lost in the 2018 play-in game to crosstown rival Flagstaff at home, 60-58.

Moran said it was an "honor" to break the postseason lull against a coach like Marcos de Niza's David Stark.

“He’s got over 300 victories and he’s a great guy and he’s done a great job down there for a long time,” Moran said.

Lingruen, a senior, finished with 18 points and his twin brother Tommy Lingruen added 14.

Mitchell Jacobson contributed nine points for the Panthers, who shot 14 of 23 from inside the arc. The sophomore turned his third-quarter steal into a coast-to-coast trip to the Padres hoop that including tripping up a defender under the rim.

Olney fed Mcmenamin his dunk after regaining control of a dribble that was about to get away from him. Mcmenamin, who finished with eight points, gobbled up the pass under the rim and slammed it down with a roar, and the crowd erupted.

Marcos de Niza had three of its five 3s in the first quarter, and Coconino dropped just as many in the opening stanza as the teams pushed the pace and then slowed down at times.

Moran thought the first half was crucial, as his team executed the objective of making the visitors play hard and fast at elevation. He also liked that his team finished with four charges taken, a stat that indicates playoff toughness.

“We knew they would come to the bucket and there were a few we didn’t get,” Moran said.

It might have been close, but it's good to be in the hunt again for a title.

The 4A will re-seed and determine the opening-round match-ups of the state championship tournament, which is set to begin Tuesday with high seeds hosting.

Panthers head coach Mike Moran reminded his team about the outside noise of how hard it is to beat a team three times in a single season, let …

Coconino Community College is on the cusp of something big. For the first time in its 22-year history, our Comets plan to field men’s and wome…

A return to the postseason ended in a heartbreaker for the Flagstaff Eagles boys basketball team on Friday at Rio Rico High School.

Pedro Billups is a state champ for a second straight year after making the move from 106 to 120 pounds.

Coconino’s Anthon Watson (0) takes the ball to the net Friday during  a game against Marcos de Niza at Coconino High School.

Coconino’s Mitchell Jacobson (3) drives with the ball Friday during a game against Marcos dd Niza at Coconino High School.