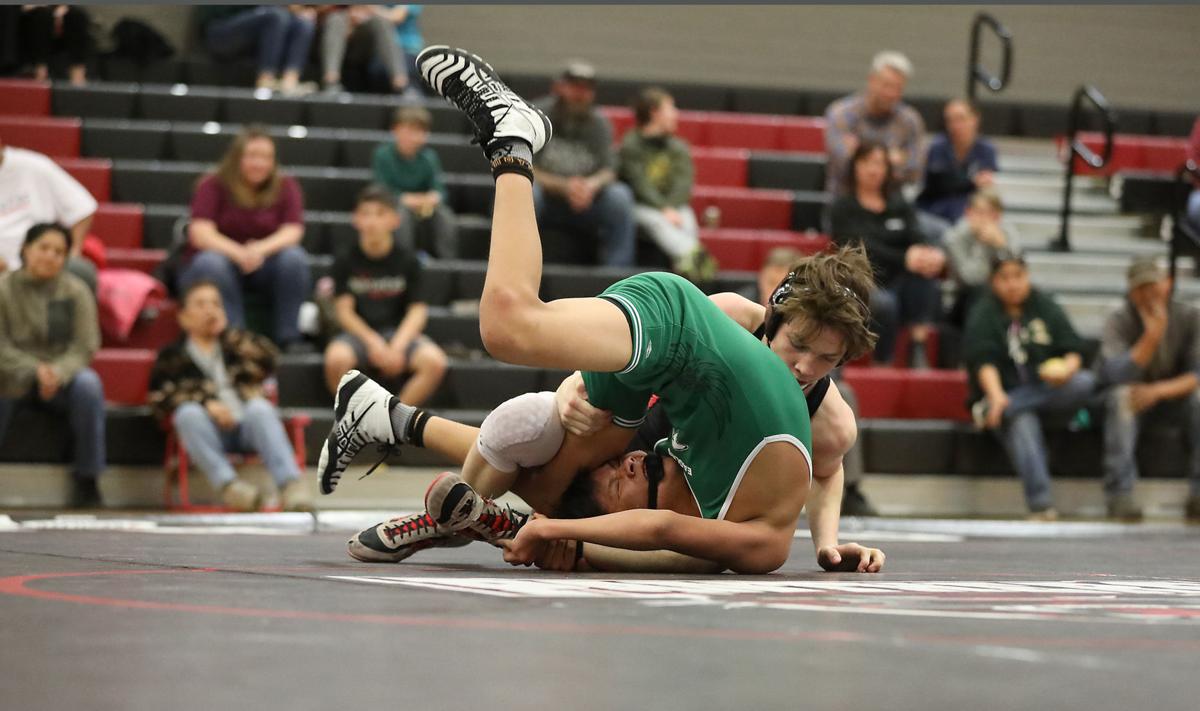 Coconino’s Pedro Billups, back, wraps up Flagstaff’s Leon Ahasteen during a match this season at Coconino High School.

There's been a bit of a perfect storm brewing in the Coconino wrestling room, and it's led to eight Panthers qualifying for the Division III state tournament that takes place this weekend.

The team's talented youth, seasoned seniors and stud Pedro Billups have all combined to make the 2019-20 season a successful one that the Panthers hope to put an exclamation point on with some hardware.

“I think we are more than capable of having a good run," Panthers head coach Mike Schmieder said Wednesday.

A top seed in his bracket for states, Billups, a 120-pounder, will be looking to repeat as a champ in a different weight class after winning a title a year ago at 106 pounds.

The Panthers sent eight to the 2013 state championships and came away with a third-place team finish. The last time they had this many wrestlers in the state brackets was in 2014, when Coconino had a total of 13 at the big meet.

Schmieder and his coaching staff could tell early in the season that if their wrestlers stayed healthy, continued to improve and found themselves in the right weight classes, the postseason could end up being the best for the team in a while.

“We feel we could make a pretty good splash down the stretch," Schmieder said.

Billups, Mark Aruguete and Ulises Gutierrez have state experience, as all three made it last year as juniors. Those seniors have been a big part of the team's success, Schmieder said, “stepping forward and really holding true to what Coconino wrestling is all about."

Aruguete will wrestle at 195 pounds, while Gutierrez will compete at 220 pounds.

Billups decided to take on the challenge of moving up in weight, something Schmieder said a wrestler needs to do in order to really grow in the sport.

“I think Pedro in particular could feel his improvement as a wrestler, and I think he started to see the big picture, the horizon of him needing to continue to improve as a wrestler," Schmieder added. "Whether he is winning or losing, he has to, in his mind, say, ‘I am going to get better as a wrestler.’”

Winning isn't always the most important focus for the Panthers, who like to compete in tough events such as the Doc Wright and Moon Valley tourneys during the course of the season to toughen up. They also reside in one of the toughest sections in the state, as only 12 points separated first-place Chino Valley and third-place Mingus Union at the Section Four tourney, with Coconino sandwiched between them.

No other section had a tighter gap between the gold and bronze teams at their respective tournaments.

“That bodes well for us when we get out of the section and get down to the state tournament and we end up wrestling guys from these other sections," Schmieder said.

Having a section champ also has been a boon for the team. Billups, who now has won back-to-back section crowns and is one of 23 total returning state champs in the state, has been a great leader for a young team that has five seniors heading into the weekend along with a freshman and two sophomores.

“There has a been a really interesting dynamic because of that," Schmieder said of Billups being in the room with the younger lightweights. "A great style of wrestling at a technical level. He’s just done a great job at exposing those guys to a whole different level of wrestling. When they step out on the mat, they are pretty confident that they won’t take on that level of wrestler that they have to endure every day at practice in our room with Pedro.”

Runner-up at the section tourney at 126 pounds, owner of a 47-8 record and the No. 2 seed for the state tourney, Panthers freshman Cooper French will take on Casa Grande's Damian Quiroz, who enters with a 15-6 record and as the No. 2 seed.

“I think Tony Hernandez, Cooper French and Ulises Gutierrez, they were all section runner-ups, and I think that the guys that they had in the finals were very credible wrestlers, all state placers for the year prior, and I think that it speaks to how deep our section is," Schmieder said.

“I know we are underdogs in a bunch of those, but I do like what I see of the brackets," Schmieder.

Following five seasons at the helm of the Coconino girls varsity basketball program, Panthers head coach Martin Reyes has announced he is step…

Flagstaff girls soccer head coach Holly Jones has been saying that all her young team knows is exciting finishes.

Gracelyn Nez's first try at putting an inbounds pass into Miyah Verse's hands went wrong, as a Rio Rico defender tipped the ball loose on the …

The run of close calls came down to one more for the Flagstaff girls soccer team in the state title game. With the 4A state championship on the line, the third-seeded Eagles played the fourth-seeded Catalina Foothills Falcons to a 0-0 tie after 110 minutes of soccer following regulation, two overtime periods and two more sudden-death periods.

Rio Rico, coming off an upset victory, appears to be getting hot at the right time, and Flagstaff will look to cool off the Hawks Saturday at …

Despite lacking a handful of pieces this preseason, the Flagstaff Eagles beach volleyball team is still having plenty of fun in the sun, using…

Gracelyn Nez's first try at putting an inbounds pass into Miyah Verse's hands went wrong, as a Rio Rico defender tipped the ball loose on the …

Coconino’s Pedro Billups, back, wraps up Flagstaff’s Leon Ahasteen during a match this season at Coconino High School.