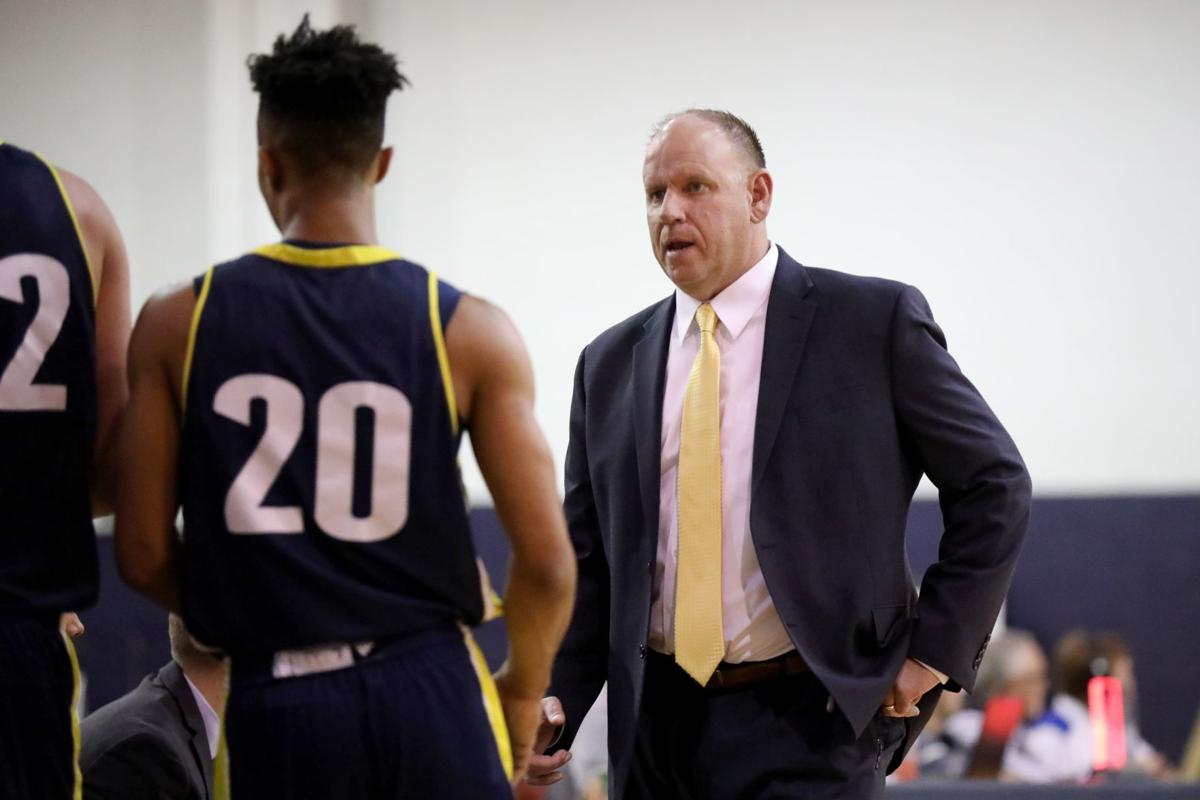 Northern Arizona head coach Shane Burcar speaks to players on the bench during an exhibition game against Embry-Riddle at Rolle Activity Center in 2019. 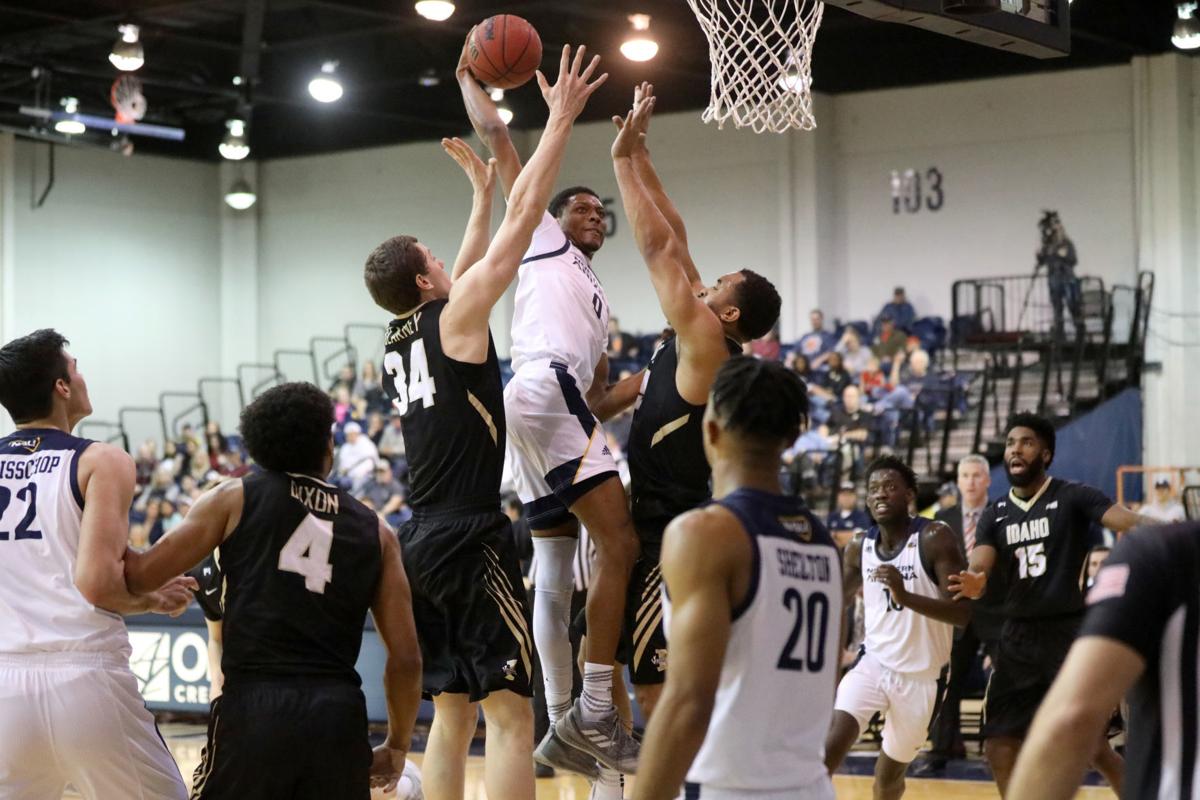 Cameron Satterwhite (0) tries to dunk over a pair of Idaho defenders during a game at the Rolle Activity Center this season.

Shane Burcar had spoken to media members countless times over the past year as the interim head coach, but on Friday he got the chance to do so as a team's head coach for the first time ever.

Northern Arizona Athletics held a virtual press conference to introduce formally Burcar as its men's basketball head coach after announcing the removal of the interim tag earlier this week. Burcar, along with Northern Arizona Vice President for Intercollegiate Athletics Mike Marlow and President Rita Cheng spoke about the hiring process and the goals for the program going forward.

Marlow confirmed that the search for a long-term head coach started last summer, not long after Burcar was named the interim head coach in June.

As the basketball season progressed, and as the team kept winning and improving on past years, Marlow said there was no thought to removing the interim tag during the season -- much like fellow Big Sky program Idaho did with then-interim, now permanent, head coach Zac Claus.

"No, we were very transparent with Shane that it was going to be a process throughout the entire season," Marlow said. "I think we have been consistent in my time here that we review all of our programs with our head coaches upon the conclusion of the season and that's what we did with men's basketball."

Marlow and Burcar echoed sentiments of understanding each other, and Burcar said he never felt that he was in limbo at all. In fact, he and his coaching staff never really spoke about their futures much until the final few weeks of the season.

While some might have been concerned about their future, Burcar made clear that he understood and respected the transparency given by Marlow, and that Burcar just wanted to continue to prove himself.

"Our coaching staff did a great job, along with our players," Burcar said. "Our coaching staff stayed strong all season long. I can honestly say this, we never once mentioned about our positions. The truth of it is, as Mr. Marlow said, he was transparent the whole time. We are big boys. It is big-boy basketball and not once did we waver. Very seldom did we talk about it."

The coronavirus outbreak that caused an abrupt halt to all sports, and the day-to-day lives of most of the world, did not cause any delay in the hiring process, Marlow said. Marlow and Cheng had discussions about going with Burcar before the Big Sky Conference basketball tournament had been canceled.

Ultimately, the final call to hire Burcar was made over this past weekend, Marlow said.

Marlow elected not to disclose who or specifically how many candidates were interested in the head coaching position, despite saying that Northern Arizona had interest from "outstanding coaches throughout the Western United States and beyond." Marlow added that the search firm worked with him to cut down the list twice over the period.

Marlow also said the use of the search firm did not cost the university anything additional costs, as there was a leftover "balance" from when the firm was hired last year to help in the hiring of Ball.

No details on Burcar's contract were able to be released as it has not been finalized by the Arizona Board of Regents. As of press time, there is no mention of Burcar's contract on the ABOR meeting book for the upcoming April 2 and 3 meetings.

Continuing to build a culture, both on and off the court and in the classroom, has been an emphasis of Burcar's since he was handed the reins of the program in June. That sentiment certainly hasn't changed since.

The foundation for the culture was built this past season, as the Lumberjacks posted their best season since 2014-15. With a strong recruiting class, solid newcomers and returners, Burcar is confident in what the group can do next season and beyond.

Burcar will need to find a way to replace some talented grad transfers, however.

Former Big Sky Newcomer of the Year Bernie Andre confirmed that he is transferring along with Cameron Satterwhite, who just finished his first season with Northern Arizona after transferring form Loyola-Chicago. Burcar spoke a bit on Andre's decision, echoing his statement from when Ted McCree left midseason, saying that he is helping Andre however he can.

The news on Satterwhite came after the press conference.

With the two recent transfers, Northern Arizona has lost five players who started games this past season in Satterwhite, Andre, Ted McCree, Chris Bowling and Brooks DeBisschop -- the latter two to graduation.

With players such as point guard Cameron Shelton, who made massive strides as a sophomore to earn All-Big Sky Conference Third Team honors, and Luke Avdalovic returning, there is talent for Burcar to work with. He'll also get some newcomers to integrate into the lineup.

Incoming freshman guards Dayton Harris and Carter Mahaney are expected to compete for the backup point guard role -- or more with the departure of Satterwhite. Transfers Adrease Jackson and Carson Towt should provide extra depth with the graduation of Brooks DeBisschop -- one of the most versatile bigs to play for the Lumberjacks in recent memory.

"Nobody can put more expectations on our program than myself," Burcar said. " ... It's all about the people. I am very excited about our recruiting class. I am way, way, way excited about the guys we have coming back who are committed to NAU."

Hitting the state of Arizona in recruiting has always been a hot-button topic for Northern Arizona head coaches and their critics, most recently former head coach Jack Murphy.

Burcar, who coached in the Valley for well over a decade, said Arizona is the top priority, but other states are still needed to be examined. Burcar mentioned a "seven-hour radius" in recruiting, essentially focusing on Arizona and the bordering states as top priorities.

Harris is a great example of the type of in-state player Burcar wants.

The point guard out of Skyline High School helped rebuild a program into a Conference 6A title contender over his career -- showing a winner's mentality that Burcar looks for in players.

"Somebody like a Dayton Harris, who is an ultra-talented point guard who makes people around him better, is a high-academic kid," Burcar said. "He's a well-spoke young man and everybody in Flagstaff is going to love him."

The Flagstaff High School volleyball team got its season started on the right foot with a 3-1 win over Prescott at home Tuesday night.

Coconino falls in 5 sets to Bradshaw Mountain in season opener

There's a silver lining in having to wait until the spring to take the court for the Northern Arizona volleyball team, which is using the chan…

The Northland Prep Academy volleyball team had its first match-up against 2A Central Region rival Valley Lutheran Tuesday night at home. With …

Northern Arizona head coach Shane Burcar speaks to players on the bench during an exhibition game against Embry-Riddle at Rolle Activity Center in 2019.

Cameron Satterwhite (0) tries to dunk over a pair of Idaho defenders during a game at the Rolle Activity Center this season.