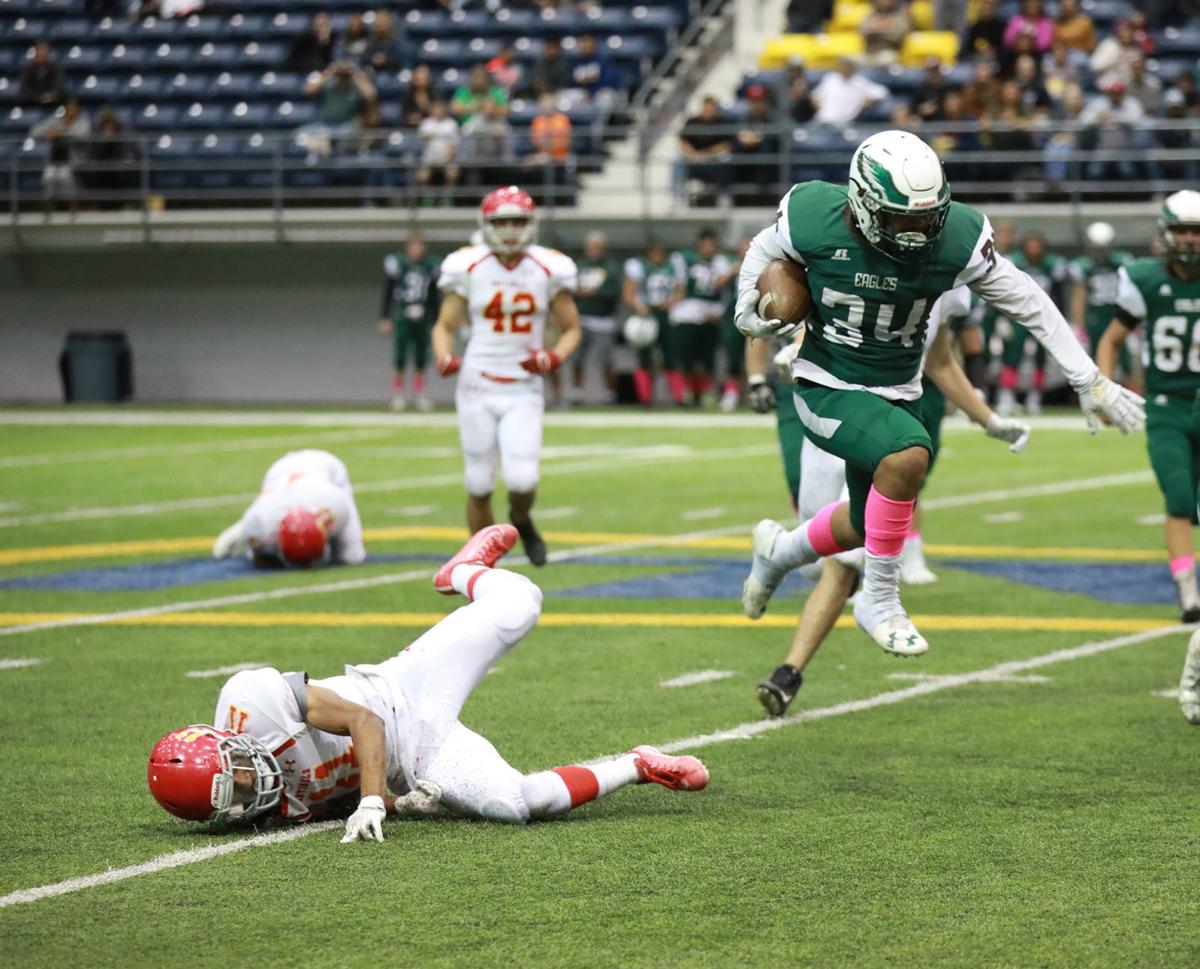 Flagstaff’s Luis Jaramillo (34) hurdles over a Seton Catholic defender in the Walkup Skydome. 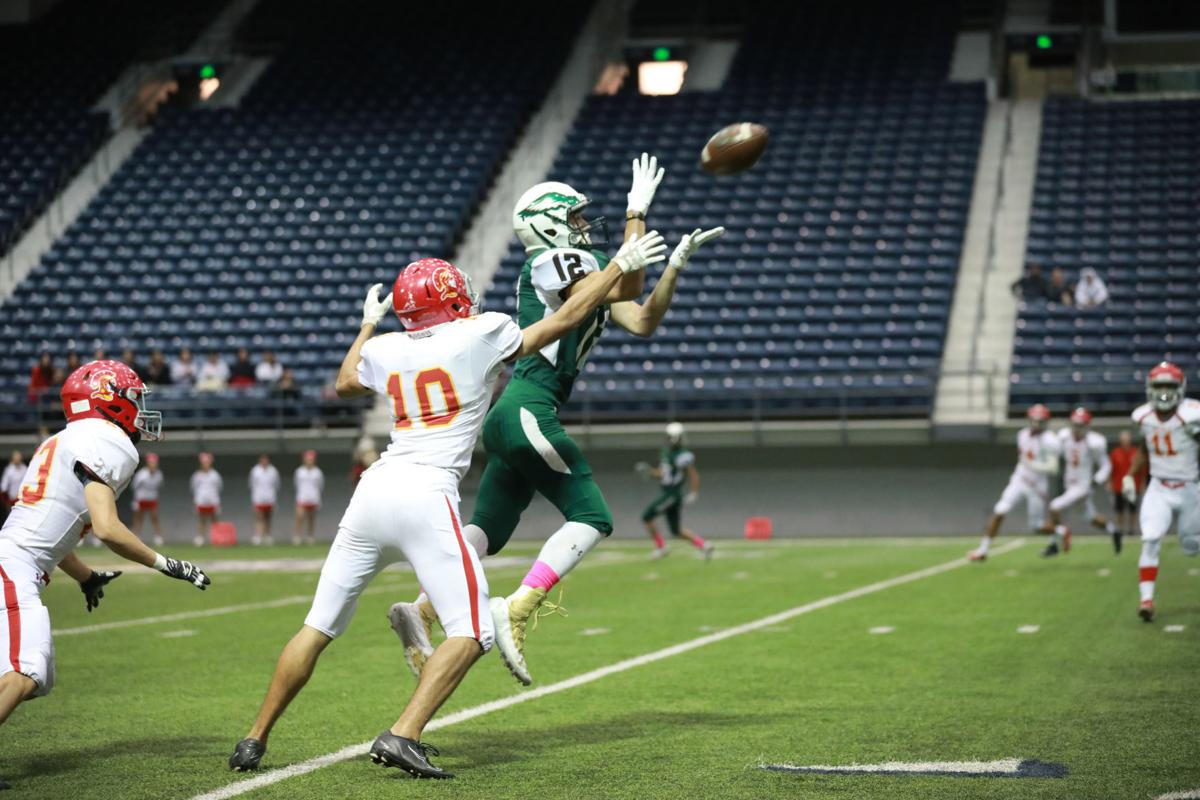 Flagstaff wide out Ryan Tagle (12) reaches to catch a ball over a Seton Catholic defender last season in the Walkup Skydome.

The Flagstaff Eagles football team will open the 2020-21 season against a perennial 4A Conference playoff contender -- which is exactly what head coach Todd Hanley wanted.

The Eagles open against the Peoria Panthers, a 4A West Valley Region, squad in the annual High School Football Kickoff Classic at the Walkup Skydome on Aug. 21 during "zero week."

The Panthers are coming off an 8-2 season that ended against Cactus in the 4A state playoffs, as the team has won at least seven games in each of the past four seasons and has been a common fixture in the postseason.

"Peoria was a team I really wanted to play. Well, two-fold. One is if you can get in and win that game your kids have a great deal of confidence, and that propels you," Hanley said during a Thursday phone interview. "The other side of it is, as a coach you get a litmus test of where your program is at. Also, your kids get to see what a year-in-year-out playoff team looks like."

Flagstaff went 6-4 overall and 3-3 in the Grand Canyon Region in Hanley's first year with the program, doubling its win total from the previous season as the team works to get back to the postseason for the first time since 2007.

This fall, assuming sports are able to return by then, the Eagles play a more top-heavy nonconference schedule on paper compared to the 2019 season.

Although the Eagles won't play a bottom-of-the-barrel program such as Dysart in 2020, Flagstaff will battle Thunderbird, which went just 3-7 a season ago, and 3A Winslow, which went a solid 7-3 in its conference.

But throw in 4A Marcos de Niza with a new head coach and there is plenty of challenge in the Eagles' slate outside of region games.

"I don't think those are unwinnable games for us," Hanley said of the games against Peoria and Marcos de Niza, adding that he believes the schedule is tougher than 2019's.

Flagstaff opens the region against Mingus Union, then hosts Thunderbird, following which the Eagles will travel across the I-40 to face Winslow on the road Sept. 18 to wrap up the nonregion schedule.

The game against Winslow is a bit of a throwback rivalry that goes back to the early 1920s when Flagstaff and Winslow played each other in the Northern Arizona Conference, according to the AIA archives.

"I think it will be really neat for the community to have that game," Hanley said of the Winslow match-up.

From there, the region slate picks up with a road trip to perennial powerhouse Bradshaw Mountain, then at Mohave and finally back home against Prescott before the Eagles take their bye week during fall break.

Flagstaff closes the year at home against Lee Williams before the annual crosstown rivalry game against Coconino High School -- which could make a return to Cromer Stadium again, but that is to be determined. Coconino should have its 2020 schedule finalized in the coming days.

It is unclear when high school football teams will be allowed to return to group practices. But for now, Hanley said, he has had his team do about as much as they can on their own with various at-home workouts.

As much as Hanley wants to get back to football, he understands the need for it to be safe as well looking ahead.

"To me the most important thing is how are we going to get back to school," Hanley said, "and get these kids their education."

Even though there still isn't a clear idea of what a high school football season will look like, the city teams are making the most of what is…

Flagstaff’s Luis Jaramillo (34) hurdles over a Seton Catholic defender in the Walkup Skydome.

Flagstaff wide out Ryan Tagle (12) reaches to catch a ball over a Seton Catholic defender last season in the Walkup Skydome.