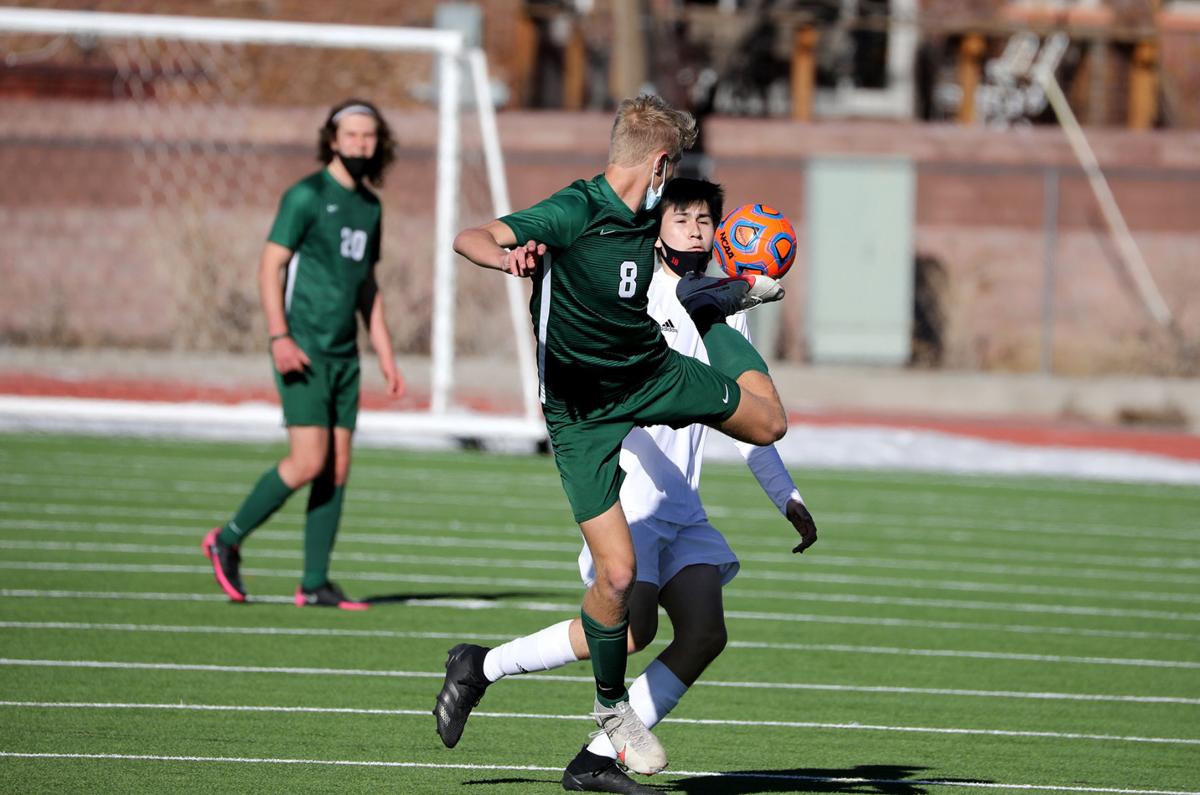 Flagstaff's Benett Olsen-Zwick (8) gets his foot to the ball against Seton Catholic during a February match. 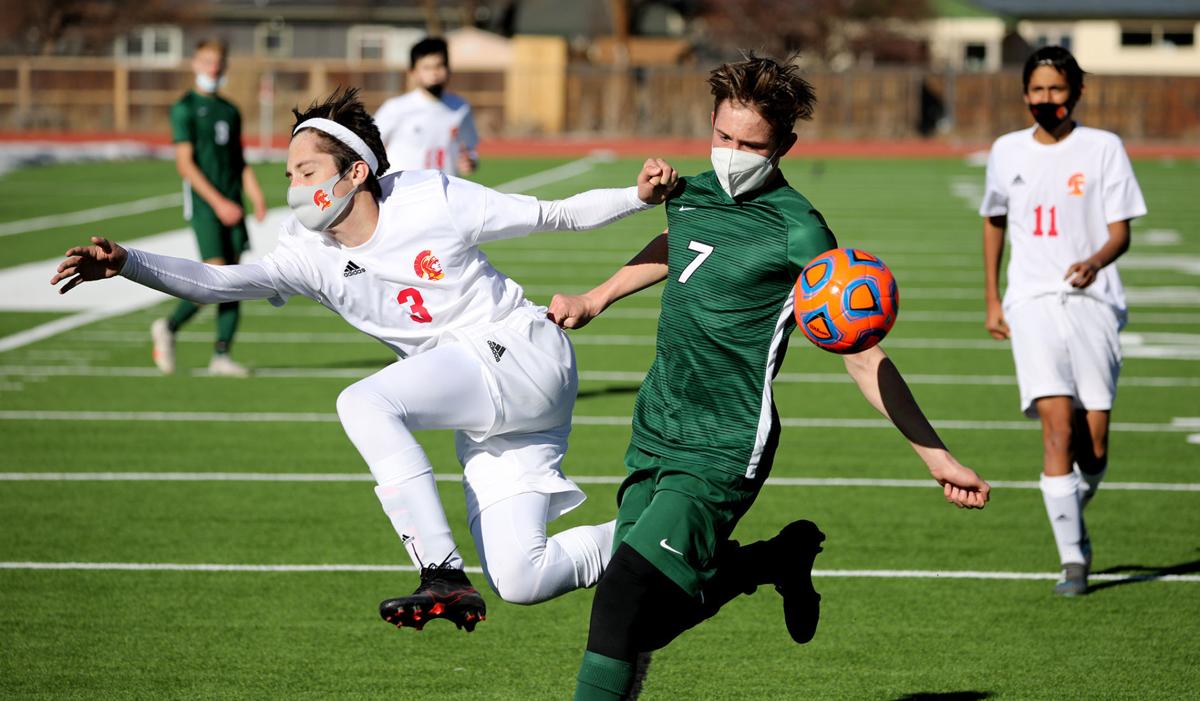 Flagstaff’s Walter Murphy (7) gets between a Seton Catholic player and the ball Thursday afternoon during a match at Flagstaff High School.

The first 30 minutes into Thursday’s 4A Conference boys soccer match between the No. 5-ranked Flagstaff Eagles and the No. 23 Seton Catholic Sentinels saw no scores from either team, but Flagstaff’s Benett Olsen-Zwick got the Eagles on the scoreboard in the final 10 minutes of half one, and it was smooth sailing from there.

The Eagles were able to breeze to a 4-0 home win and keep their undefeated home record alive, taking a third straight win in the process.

The Eagles took a little bit of time to get points on the board. They used their stellar team communication and ball-handling skills to keep the pressure on the opposing goalkeeper with shots on goal. Olsen-Zwick was active, flanked by his midfield partner Jonathan Alvarez -- the two were always looking to set each other up to try try get shots in the back of the net.

The Sentinels were still able to get a few shots on goal in the first half, but all were stuffed by Eagles senior keeper Riley Olsen-Zwick. Every time Riley Olsen-Zwick stopped the ball and had a chance to kick it down field, he was always looking out for his brother, Benett.

“Even though he is the keeper we always have that chemistry together” Benet Olsen-Zwick said. “Whenever he’s picking up the ball he’s always looking for me. He’s kind of the leader in the back and I’m the leader in the front, so that’s where we meet together.”

The second half was when the scoring for the Eagles started to come together, as Benett Olsen-Zwick was able to convert his second goal of the game with an easy breakaway shot.

Sophomore Manuel Soto, who was the hero in the 1-0 win against crosstown rival Coconino, scored off a header in a tight exchange close to the goal, and Omar Vega was able to get on the board as well in the final minute of the game.

With the victory, the Eagles will could cement their spot in the initial power-points rankings -- having been placed fifth Thursday. As for his thoughts on the ranking, Eagles head coach Mike Jenkins said his team isn’t satisfied yet.

“I feel lucky to be given the accolades that we have, but we’re not satisfied.” Jenkins said. “We just got to keep improving every game. It’s always an honor to be ranked at all, but that fact that we’re sitting at five just means we are more of a target right now.”

Benett Olsen-Zwick also gave his thoughts on the ranking coming into the match.

“It was a little bit of a shock when I first saw it; we feel like we’re the best team in the 4A Conference,” he said. “We had a tough loss to Prescott, but we are always looking to push for the top spot no matter what. We’re just looking to carry that momentum.”

The win against Seton Catholic marks the third straight shutout for the Eagles, but even with that statistic, Jenkins said he knows that his team still has a lot to prove and is focused on taking it one match at a time.

“We just gotta keep going, and every game we have to improve.” Jenkins said. “We gotta focus on Mingus right now. Every game the stakes are a little bit higher because you want to keep improving. You just gotta keep pace with some of the big boys down in Prescott.”

Flagstaff's next game will be a road contest  against No. 15 Mingus Union on Saturday. After that it’s a chance to keep the home win streak going, with upcoming matches against No. 20 Desert Edge on Wednesday and then No. 10 Cortez on Friday

The 2A Northland Prep Spartans baseball team has been a bit up and down this season.

Once again adding a player they recruited out of high school, the Northern Arizona Lumberjacks women's basketball team announced the addition …

The 4A Coconino Panthers have been up and down, but they are on the up this week.

The 4A Flagstaff softball team bounced back from back-to-back losses with a 13-1 win over 3A Holbrook on the road in Holbrook Saturday morning.

Flagstaff's Benett Olsen-Zwick (8) gets his foot to the ball against Seton Catholic during a February match.

Flagstaff’s Walter Murphy (7) gets between a Seton Catholic player and the ball Thursday afternoon during a match at Flagstaff High School.