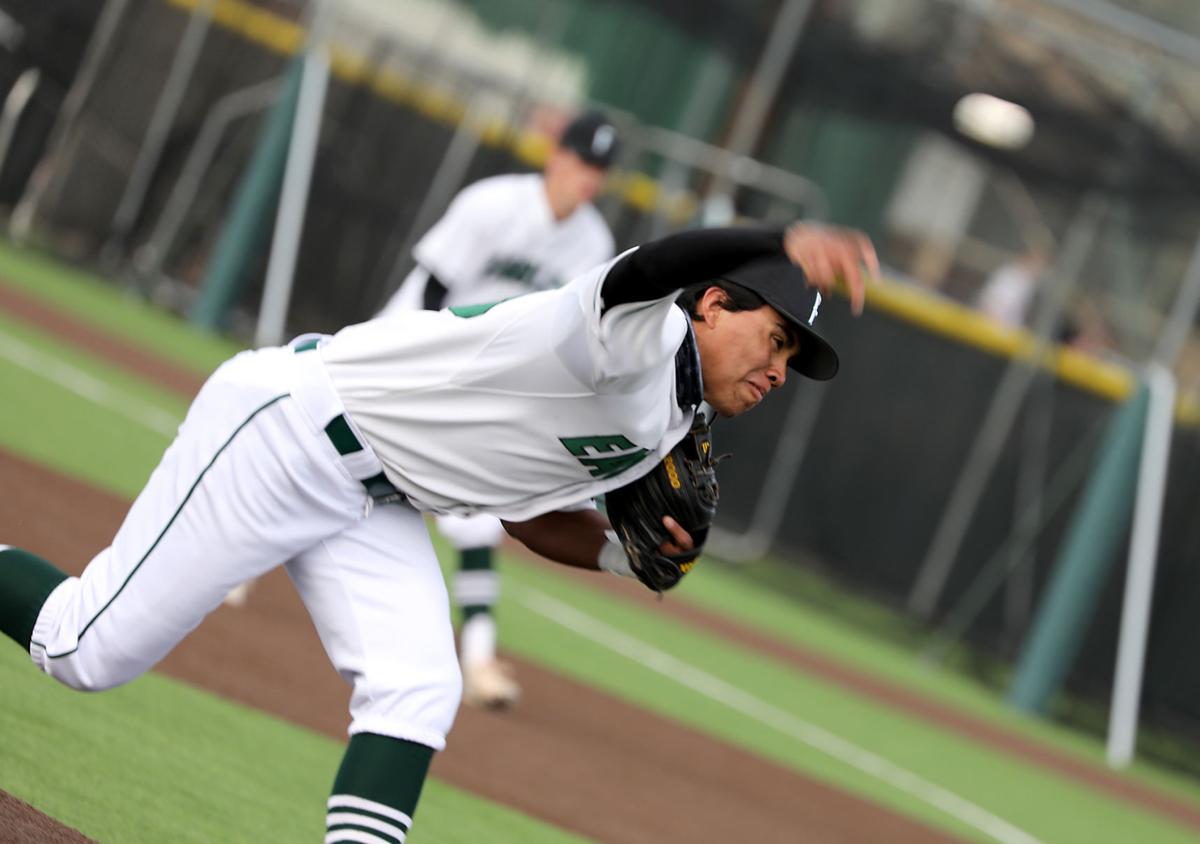 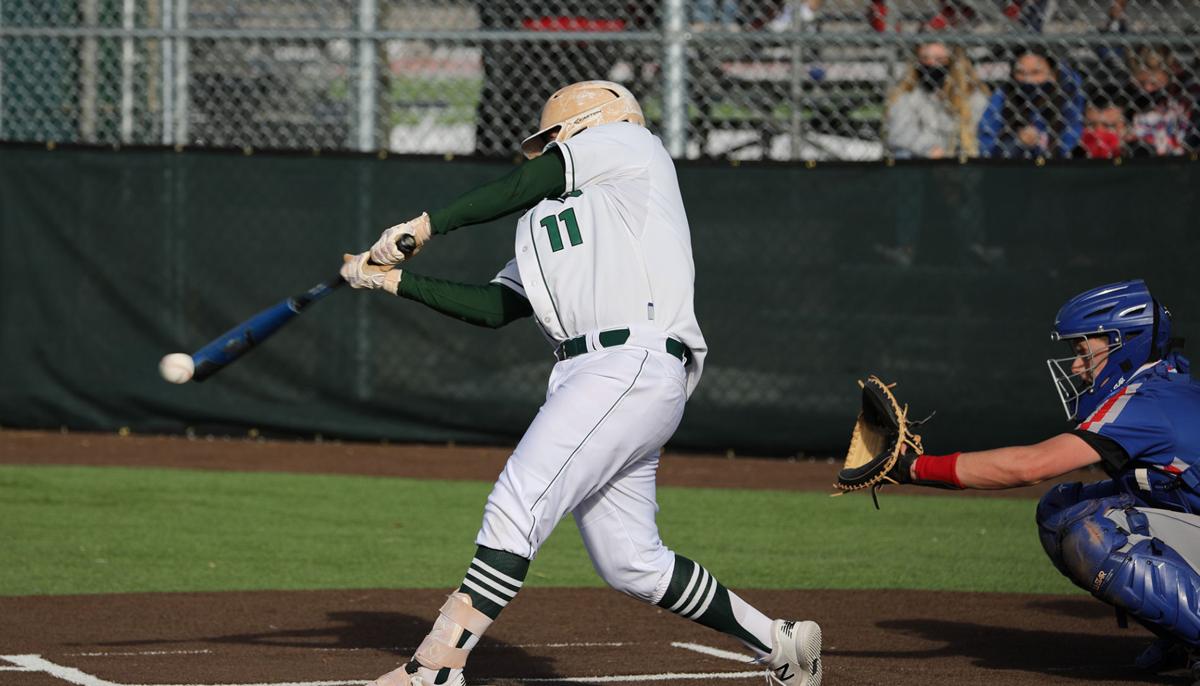 Flagstaff’s Sam Schmitz (11) connects with a pitch during a game against Holbrook in mid-March.

Since manager Mike DoBosh took over the program in 2016, the Eagles have had two winning seasons, two losing seasons and a season that could not be finished due to the COVID-19 pandemic shutting down spring sports in March 2020.

However, in 2021, things have seemed to straightened out for the Eagles. They have soared to an 8-0 record to start the season -- by far the best start under DoBosh, with their previous best starts at 5-3 both in 2017 and 2019.

The skipper pointed to pitching being one of the big reasons for the ballclub's hot start, saying his hurlers have really stepped up this year.

“I definitely think pitching is the top one; we have thrown really well,” DoBosh said before practice Friday. “Guys like Justin Hanson, Sylas Clerry, Teague Van Dyke and others have done a really good job of throwing strikes, keeping hitters off-balance and doing everything that we ask them to do. Also, offensively, I think we have come out and swung it real well. We’ve come out and have been really aggressive to start the season."

Clerry has been a huge bright spot for the 4A Conference Eagles, both on the mound and at the plate. Clerry is batting .407 with 10 RBIs on 11 hits and one home run -- a grand slam in Flagstaff's 24-1 rout of 3A Holbrook.

DoBosh said Clerry's leadership qualities as a senior are just as important as his on-field production.

“He has been the hands-down leader of this team. He didn’t need to be appointed by me or anybody else, that’s just who he is,” DoBosh said. “He is a great kid to be around. He’s fun and he truly cares about the guys. That’s huge for us to have someone in that leadership role take charge and bring everyone together. We have had a lot of close teams before, but this group is by far the closest, and a lot of that is due to him.”

Clerry backed up his manager's claim, saying he does not shy away from being a leader and welcomes that kind of opportunity.

“Personally, I like being a leader. It is something that I have just grown up to be,” Clerry said. “It’s pretty simple for me to just come out here and lead my team, but we have a bunch of leaders, so I wouldn’t say I’m the only one. I love making sure that all the guys are on the same page and same mindset, as well as making sure everyone is working hard out here.”

Happy to be back

This new season is a breath of fresh air for the Eagles, as last season the team was forced to go on hiatus due to the pandemic. They were only able to get seven games in, with their last played on March 9 before being shut down for the 2020 year.

DoBosh expressed gratitude and thankfulness for the opportunity to be out on the field once again, and although some safety guidelines and protocols are still in play, the team continues to press on.

“I think it just means a lot more to us, because we were unfortunately one of the sports that didn’t get to play a full season last year,” DoBosh said. “We felt so bad for those seniors, especially not getting to finish their final year. So, it's just so great to be out here, playing baseball, competing and being out here with the other coaches and the kids. Even though we are wearing masks and social distancing as much as we can, we’re just so happy to be out here and playing.”

Clerry also said how happy he is to be playing ball again, adding that he is excited to play out his senior year.

“It feels great, obviously we all love baseball and just being back out here on the field is one of the best things,” Clerry said. “It gets your mind off school and whatever else may be going on, this is an escape for me, so it just feels great to be out here again and let loose.”

This week, the Eagles will have a chance to improve on their already impressive 8-0 record.

They will play a two-game series against fellow Grand Canyon Region squad Lee Williams (5-2, 2-2 Grand Canyon) starting Wednesday at home then Saturday at the Volunteers' home diamond in Kingman.

Having already broken records and put himself in a position for immediate success, Northern Arizona freshman distance runner Nico Young is loo…

Despite 13 strikeouts and a near no-hitter by sophomore Gracie Schmitz, No. 7 Flagstaff gave up a two-run home run in the top of the seventh i…

The second-seeded Northland Prep Spartans defeated No. 7 Morenci Jr./Sr. in the quarterfinals of the 2A Conference softball state championship…

Coconino football looking ahead to 2021 season in spring practice

The returning seniors for Coconino football have not seen much disappointment in their careers. A winning history, paired with significant ent…

Parenting and running have long been intertwined in my life.

After a shortened 2020 high school football season that followed an uncertain offseason, the Flagstaff Eagles were finally able to meet on the…

No. 5-seeded Flagstaff's season came to an end Tuesday as the Eagles fell at No. 4 Salpointe Catholic in the 4A Conference state baseball cham…

Jacob Clouse, a rising junior at Coconino High School, would sprint over from baseball practice -- the Panthers went 10-8 and reached the firs…

Flagstaff’s Sam Schmitz (11) connects with a pitch during a game against Holbrook in mid-March.