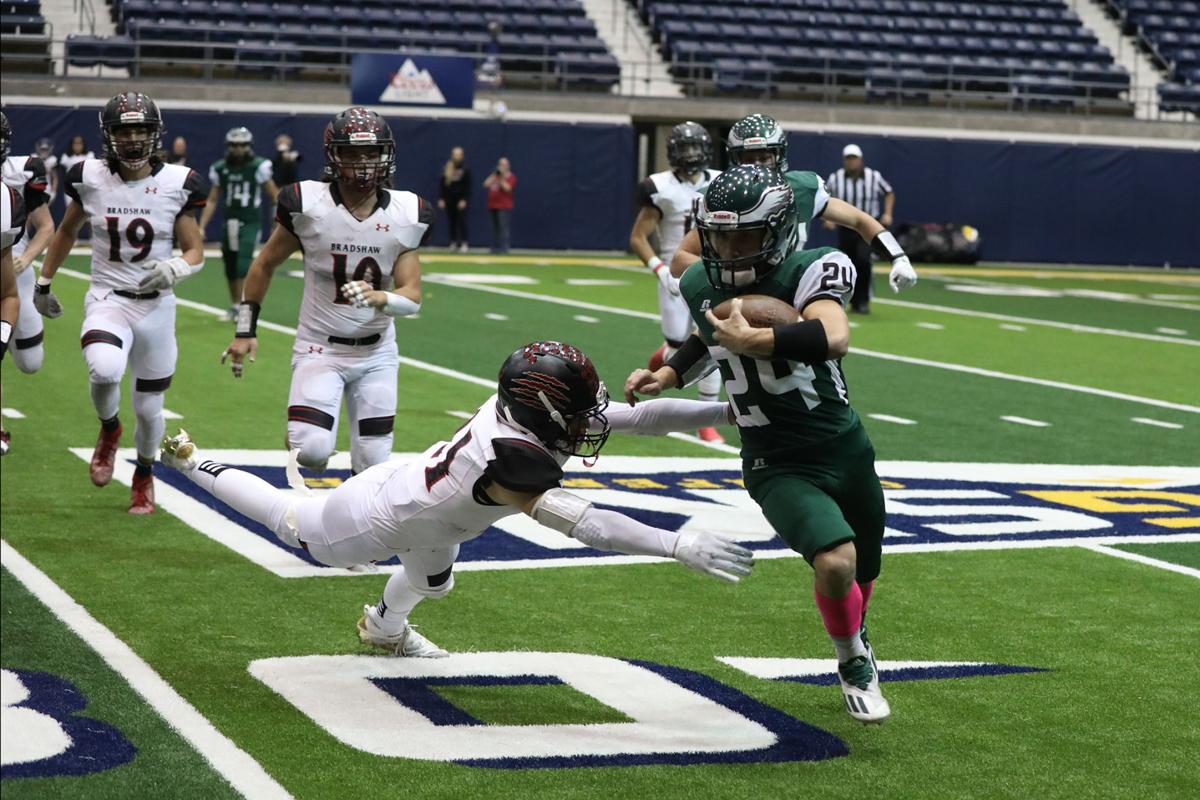 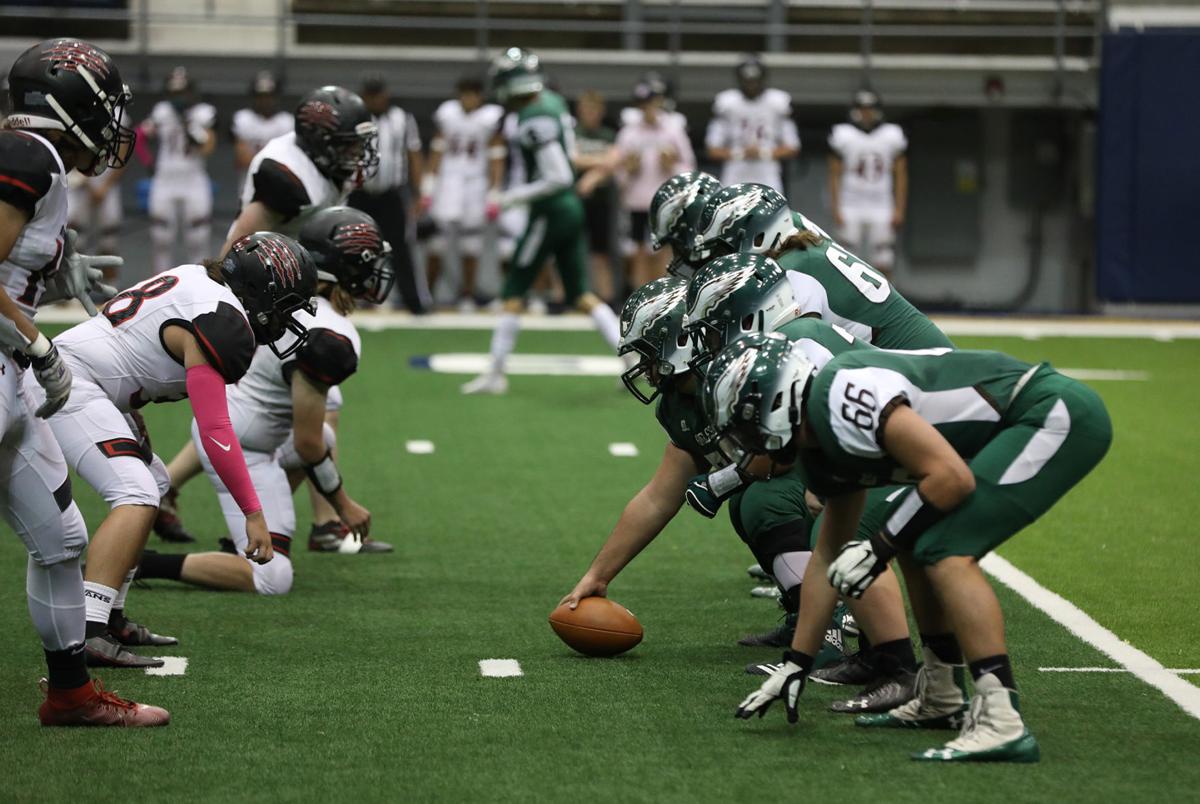 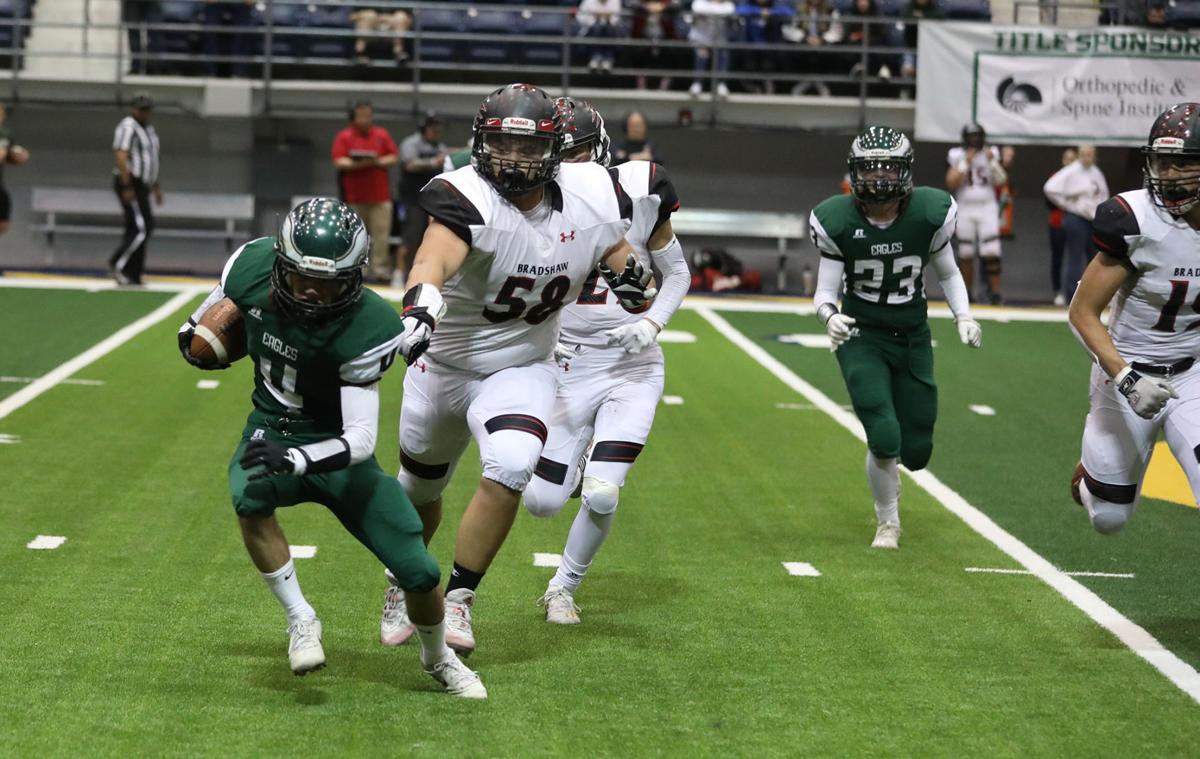 Holden Sena (4) breaks a Bradshaw Mountain tackle while running the ball Friday night during a game in the Walkup Skydome. 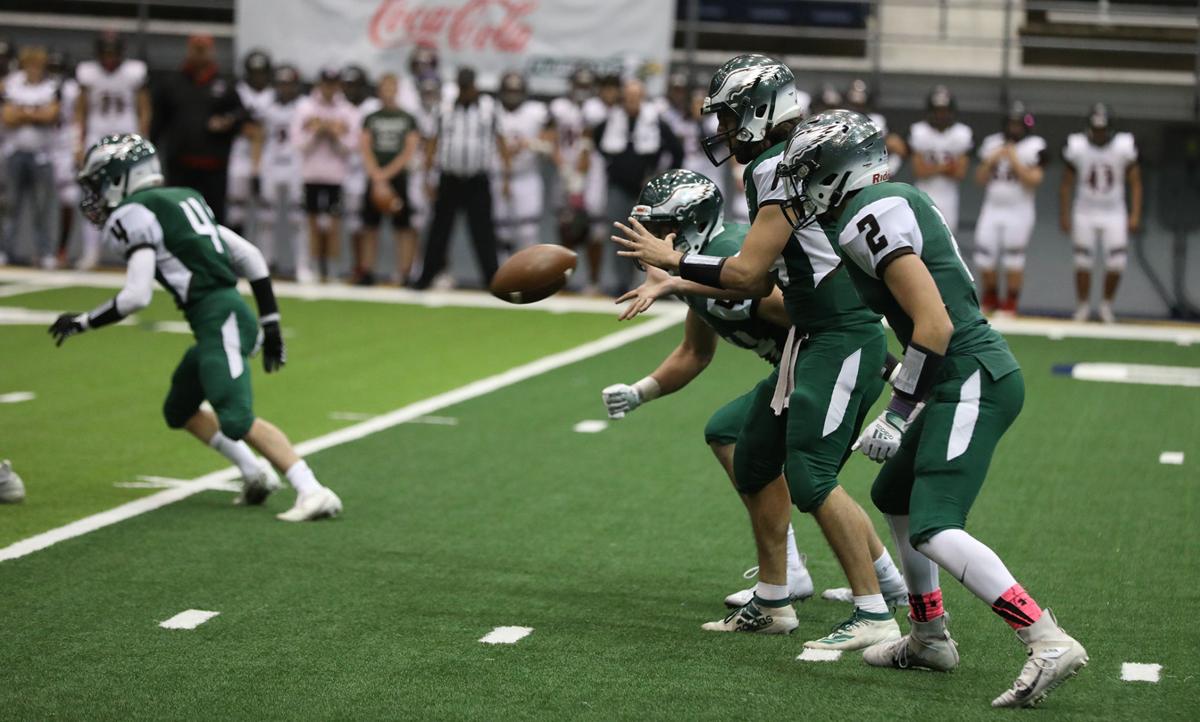 Flagstaff’s Bodie Maier (14) takes the snap Friday night against Bradshaw Mountain during his team's home game in the Walkup Skydome. 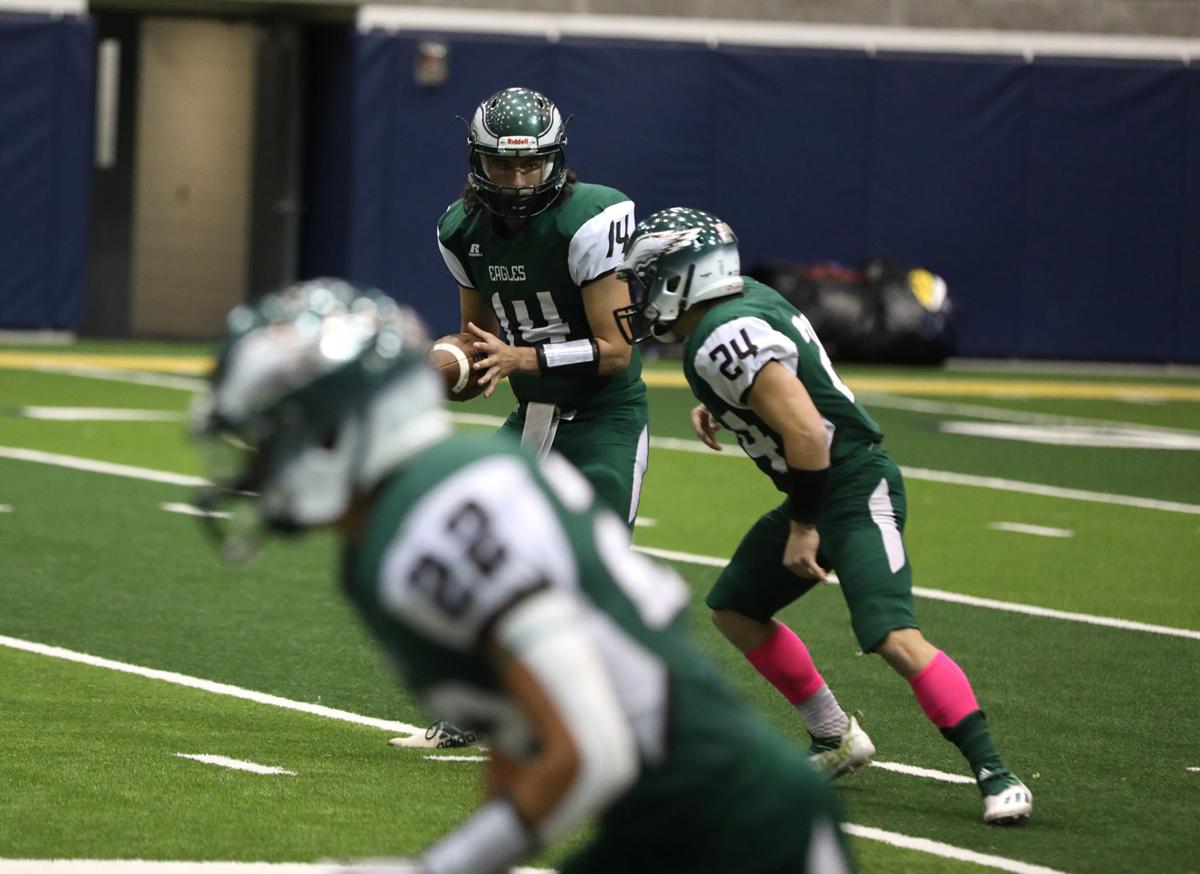 Flagstaff quarterback Bodie Maier (14) readies to hand off the ball during a home against Bradshaw Mountain Friday night in the Walkup Skydome.

From start to finish, Bradshaw Mountain’s front lines dominated the trenches, moving the ball well offensively with long, methodical drives and stopping Flagstaff from creating any offensive momentum itself.

“We had a hard time with them just stacking the box against us the way they did, and the offensive line just couldn’t adjust to the pressure. And we couldn’t get through their offensive line defensively,” Manning said.

The game started slow for both teams. Flagstaff received the opening kick and started the game running the ball effectively. Senior running back Marcus Salcido played in the backfield after missing consecutive games due to injury in the weeks prior -- which gave the Eagles a small spark in the opening drive.

The Eagles ran for a couple solid gains and eventually got a first down, but ended up punting. Flagstaff turned Bradshaw Mountain over on downs in the ensuing possession to get the ball back with a chance to take an opening lead.

However, midway through the first quarter, Bears senior Aiden Ott intercepted a pass. A few plays later, Bears junior Tanner Mitchell caught a touchdown pass to give Bradshaw Mountain a 7-0 lead with 2:53 left in the quarter.

“It gave us great field position and we got a score out of it, and that really just kept our offense going,” Ott said.

Flagstaff’s offense continued to stall, gaining just one first down in the second quarter. Meanwhile, Bradshaw Mountain pushed the ball down the field again on a long drive, eventually scoring another touchdown on a two-yard run by sophomore Gabriel Ricketts to go up 13-0 with 4:22 left in the half.

Another Bears interception with four seconds left until halftime stopped any chance of Flagstaff scoring before the break to cut into the lead.

Bradshaw Mountain moved the ball down the field effectively with a few short passes and good blocking on runs to the outside after receiving the opening kick in the second half. With 7:29 left in the third quarter, sophomore Jordan Kelly ran in a touchdown to push the lead to 19-0. A two-point attempt was no good, but the Bears increased the margin to three scores.

Finally, with just over six seconds left, Flagstaff senior quarterback Bodie Maier hit junior receiver Holden Sena for a long pass for a first down near the 50-yard line. It was the kind of pass that, earlier in the season, happened regularly between the two with their special connection.

“We can kind of just give each other a little look and know where he is going to put the ball, where he wants me to be, and we had that going on for us later in the game,” Sena said.

The two teams traded possessions, and late in the third quarter Sena caught another ball near midfield. He caught another 8-yard pass on the first play of the fourth quarter. But a couple plays later, the Eagles turned the ball over on downs, ending their last offensive possession of the game.

With 10:59 remaining in the fourth quarter, Bradshaw Mountain began a methodical drive. The Bears ran effectively, converting on key third downs and winding the clock down to milk the lead.

The Eagles, trying to get the ball back, forced a few third downs, but Flagstaff penalties and solid plays from the Bears kept the chains moving and the clock winding. Eventually, after reaching Flagstaff’s red zone, the Bears knelt out the clock, taking nearly 11 minutes of game time on their final drive to secure the victory.

Friday’s game was the first time Flagstaff has been shut out this season. Ott, whose Bears were shut out the week before in a 3-0 loss to Lee Williams, said not allowing any points to the Eagles was special. Even more, it served as a bit of revenge from a game a couple years ago.

“It feels amazing. They shut us out back in 2019, and it’s amazing to give it right back to them,” Ott said.

Manning said Bradshaw Mountain was simply a better team Friday, both in execution and mindset. The Eagles have lost three consecutive games now, and what was a promising start at 4-0 could begin to get ugly if the Eagles continue to lose.

“As a whole this is the same group that we’ve had weeks 1-4. So we’re trying to figure out what it is that’s missing. And really it’s up to them. As coaches we see it, we can point it out or identify, and they’ve got to go and do it. I told them to go home and check their gut, and we all need to figure this out because otherwise we’re a 4-6 team,” Manning said.

Sena agreed, saying the Eagles are still in position to fight for a playoff spot and turn things around in their last three games of the season. It needs to happen quickly, though.

“I don’t think we can sit on it, especially after three in a row. If you do that, you just continue to lose,” he said. “I think we have the confidence that we can get back on it. But what we need to do is reevaluate and understand why we’re here.”

Flagstaff is set to face Prescott (5-2, 2-0 Grand Canyon) Friday on the road.

Holden Sena (4) breaks a Bradshaw Mountain tackle while running the ball Friday night during a game in the Walkup Skydome.

Flagstaff’s Bodie Maier (14) takes the snap Friday night against Bradshaw Mountain during his team's home game in the Walkup Skydome.

Flagstaff quarterback Bodie Maier (14) readies to hand off the ball during a home against Bradshaw Mountain Friday night in the Walkup Skydome.