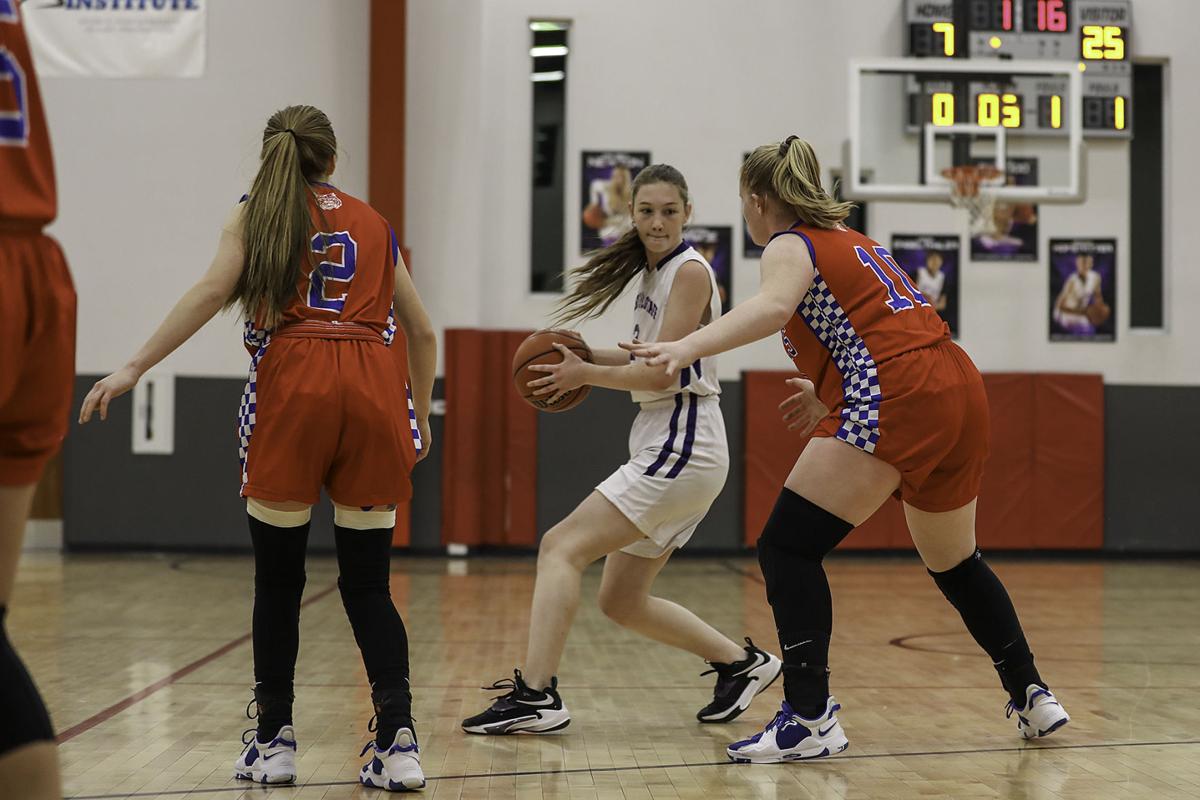 Basis Flagstaff's Lotee Baker (2) switches it up in an attempt to throw off Mayer defenders Tuesday during her team's home game. 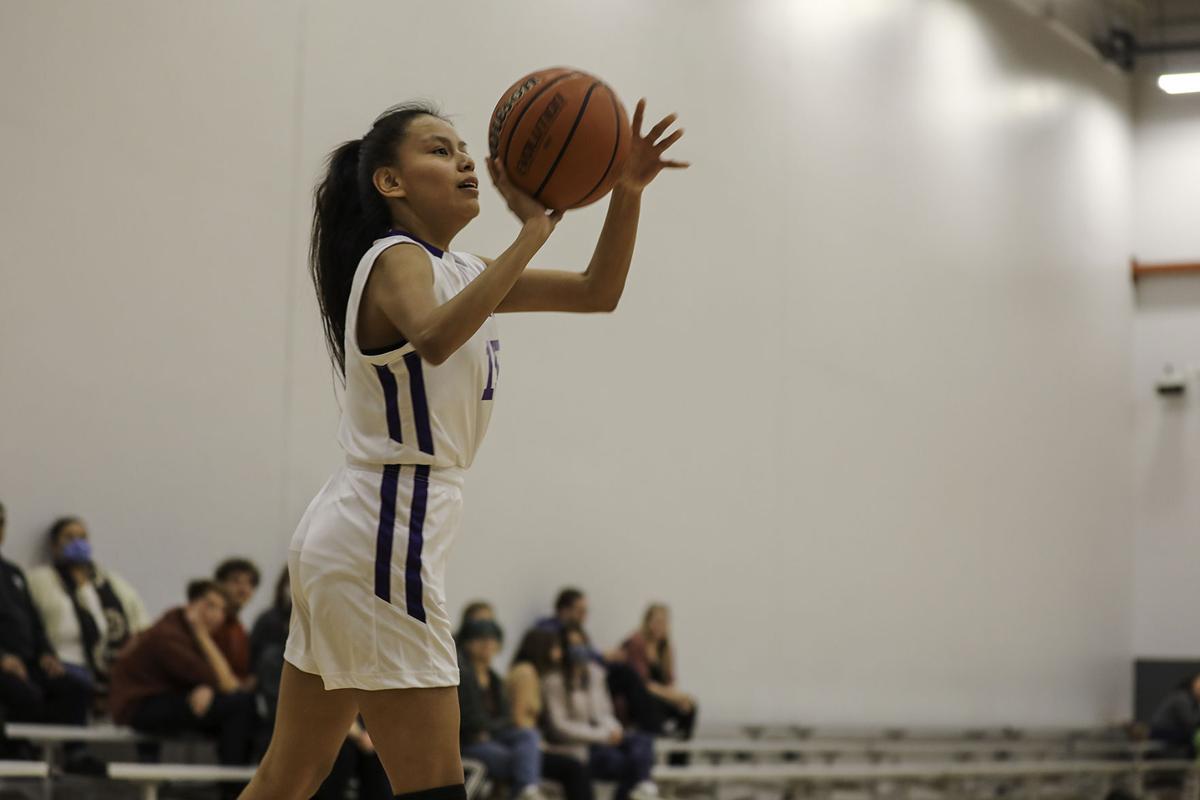 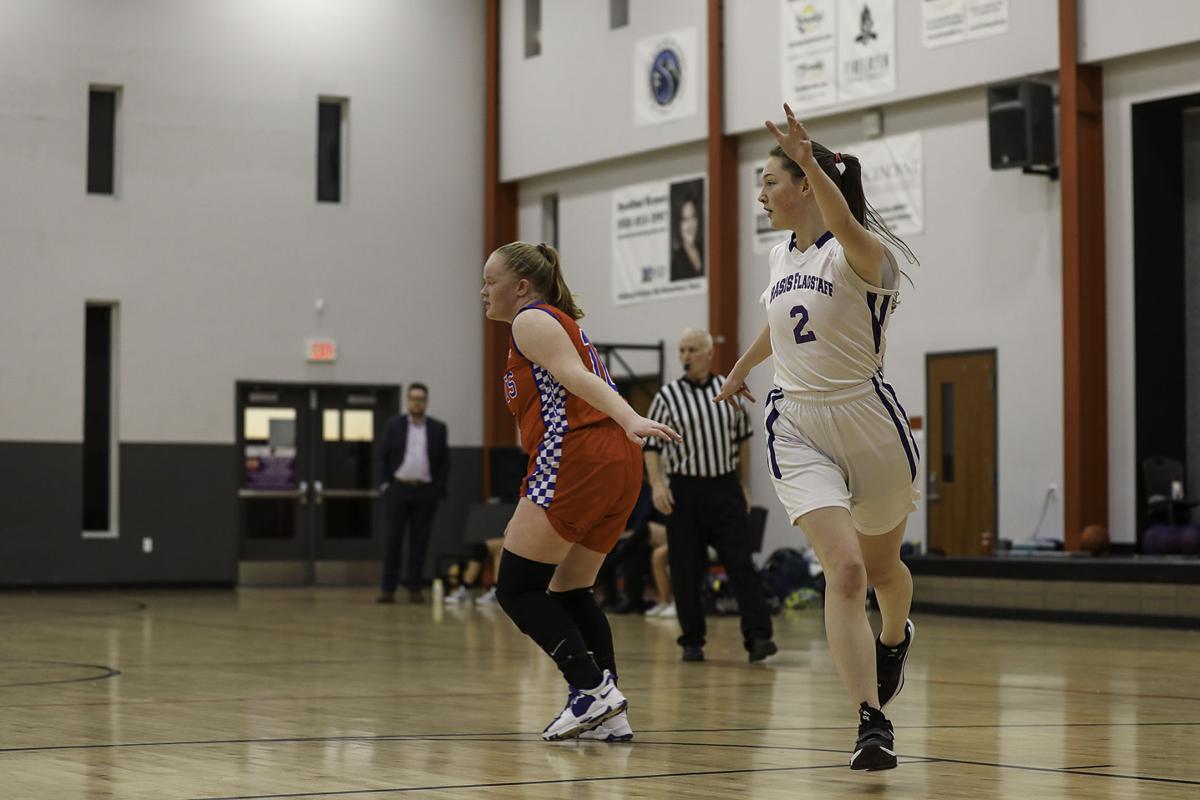 Basis Flagstaff's Lotee Baker (2) indicates that she's open for a pass Tuesday evening during a game against Mayer at Basis Flagstaff. 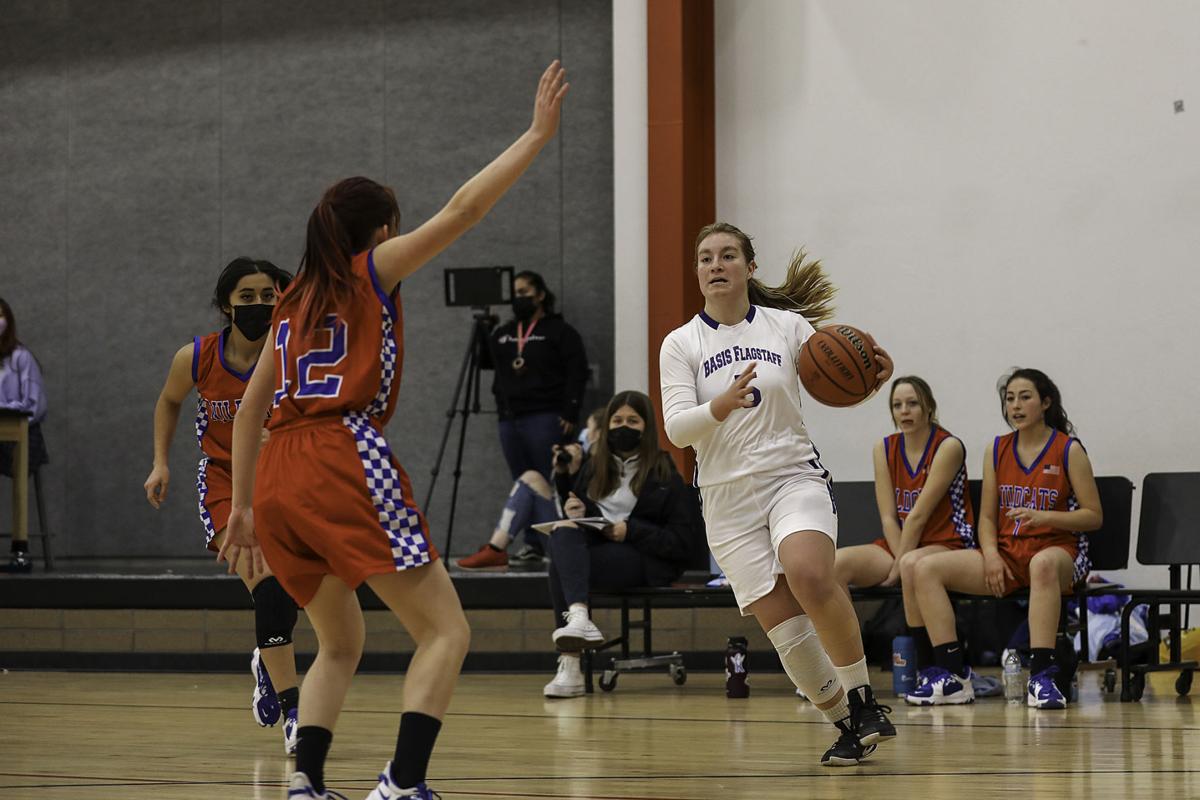 Basis Flagstaff's Kelsey Newton (5) looks to pass the ball Tuesday evening during a game against Mayer. 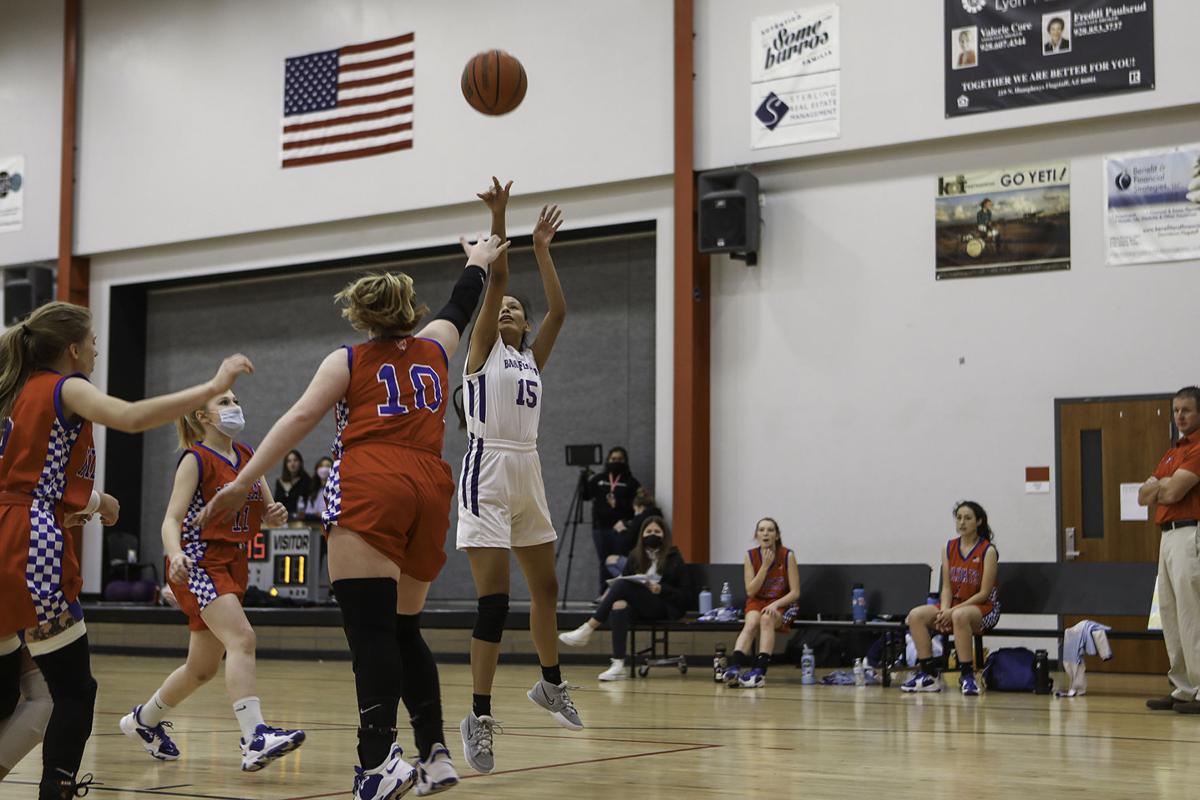 The No. 38 Basis Flagstaff Yeti girls basketball team fell 51-15 to No. 12 Mayer at home Tuesday, pushing its record 0-7 on the season and 0-6 in the Central Region standings.

The first time these 1A Conference teams met, Mayer beat Basis Flagstaff 52-11 while hosting the first game of the season.

Mayer won the opening tip but back-and-forth turnovers early kept the score tight, with Mayer leading just 2-0 more than two minutes into the game. Basis found its first bucket off of two nifty saves near the sideline, eventually finding senior forward Kelsey Newton, who knocked down a wide-open midrange jumper, tying the game at two. Energetic turnover-focused defense kept Basis close, only trailing 11-7 at the end of the first quarter.

All offensive production stalled out for the Yeti in the second quarter and the Wildcats ended the period on a 14-0 run, leading 25-7 at halftime. When Newton left the court needing a rest, all momentum for Basis vanished. The offense struggled to keep possession and Mayer dominated the pace.

Despite the lopsided scoreboard, Basis stayed active on defense and continuously forced turnovers down the stretch of the second half. It ended its offensive drought with just under two minutes left in the third quarter, knocking down a free throw. Shortly after, junior Guard Teluguntla Kusuma hit a midrange jumper, getting the Yeti to 10 before the end of the third quarter.

Mayer knocked down a last-second 3-pointer off an inbound from the corner to extend its lead to 30 just as time expired in the third.

With a running clock in the fourth, both teams picked up the pace, creating some scoring opportunities for the Yeti, who added five more points in the fourth.

Basis is in its first year as a program and was only averaging 11.8 points per game coming into Tuesday night’s game. Small steps are going to be important in the growth of the program.

The No. 18 Basis Flagstaff boys basketball game against Mayer, which was scheduled to begin following the conclusion of the girls game, was canceled due to COVID-19 issues within the Mayer boys program. The Basis boys (4-3, 2-3 Central) take the court next on Wednesday on the road against No. 33 Seligman (2-2, 1-2 Central).

The girls have their next game on the road on Saturday, taking on the ninth-ranked Williams Vikings (5-2, 2-1 Central). It will be the first meeting between the two schools.

Basis Flagstaff's Lotee Baker (2) switches it up in an attempt to throw off Mayer defenders Tuesday during her team's home game. 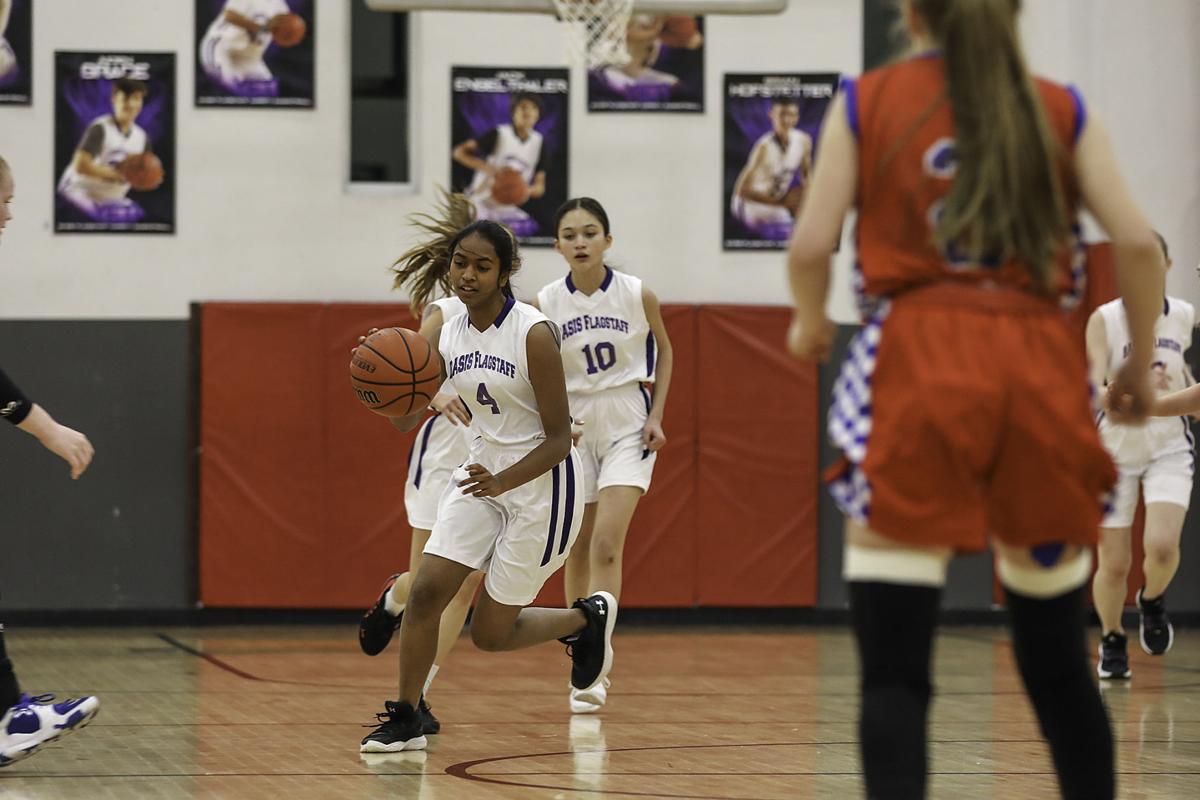 Basis Flagstaff's Kusuma Teleguntla (4) brings the ball out of her team's half of the court Tuesday during a game against Mayer at Basis Flagstaff.

Basis Flagstaff's Lotee Baker (2) indicates that she's open for a pass Tuesday evening during a game against Mayer at Basis Flagstaff. 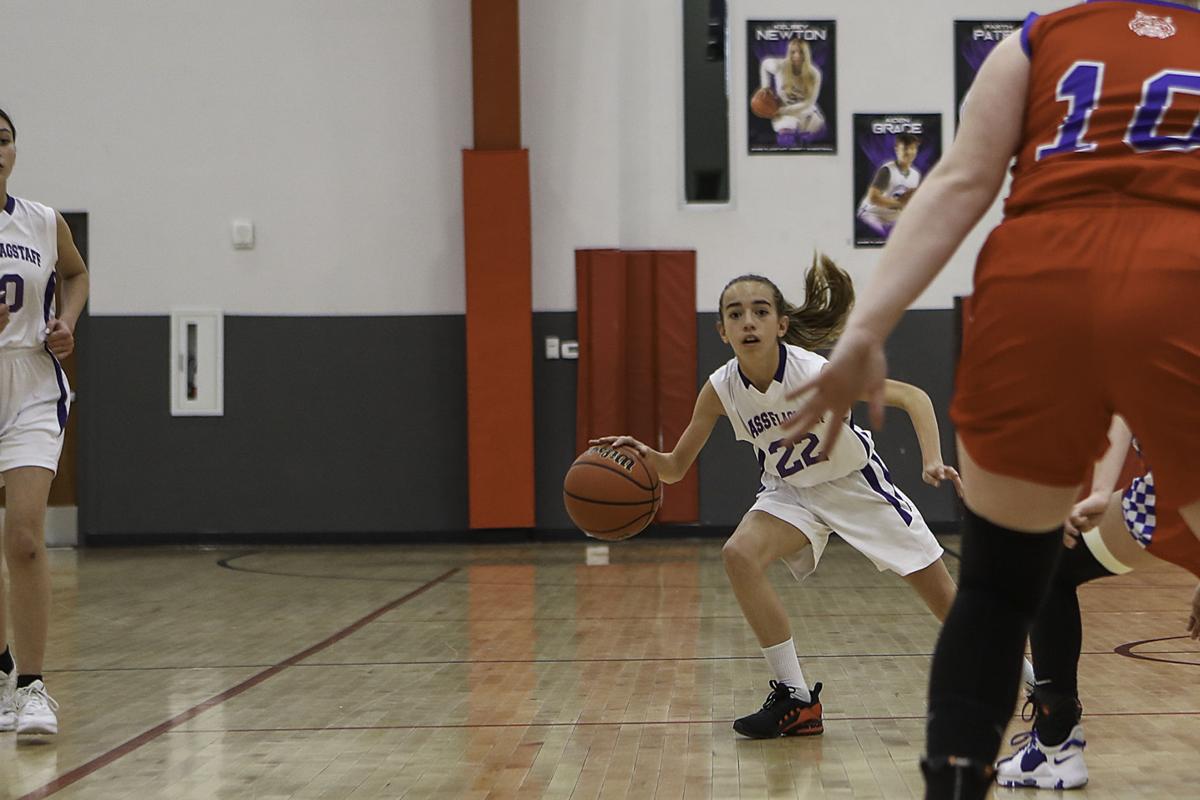 Basis Flagstaff's Emily Mullaney (22) looks for an open teammate Tuesday evening during a game against Mayer.

Basis Flagstaff's Kelsey Newton (5) looks to pass the ball Tuesday evening during a game against Mayer. 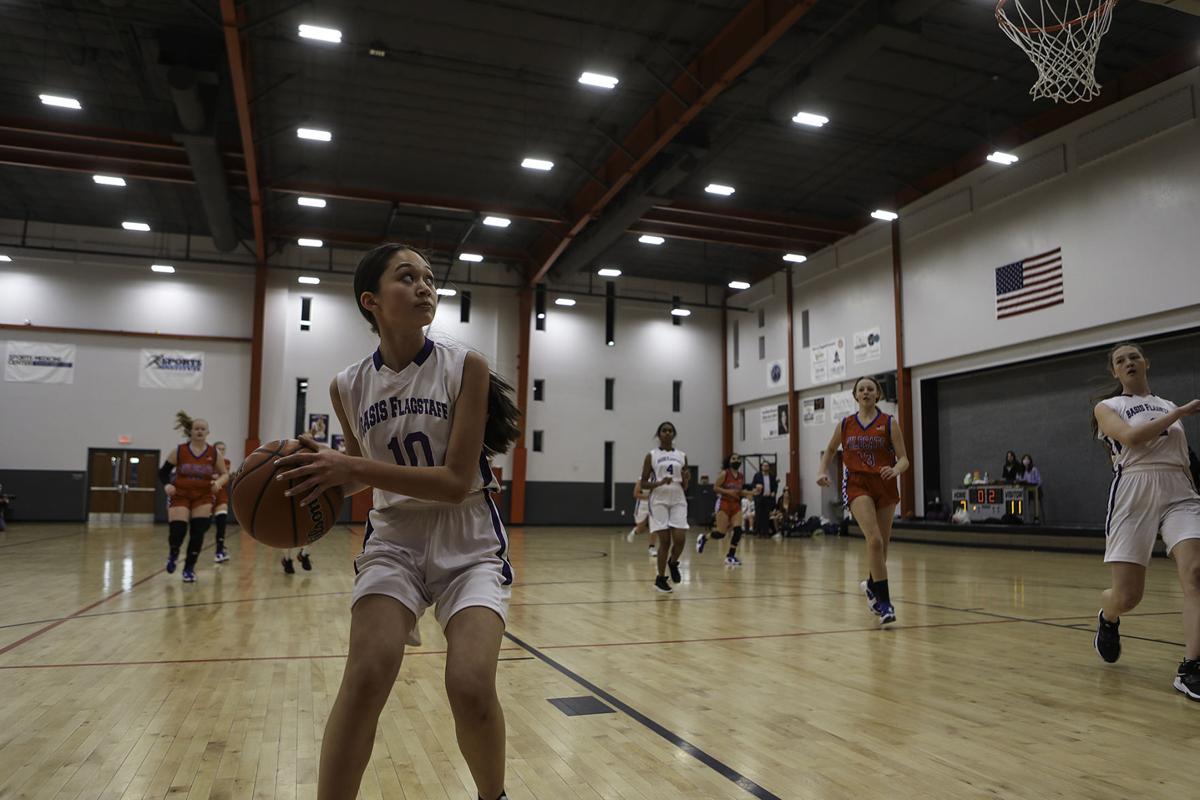