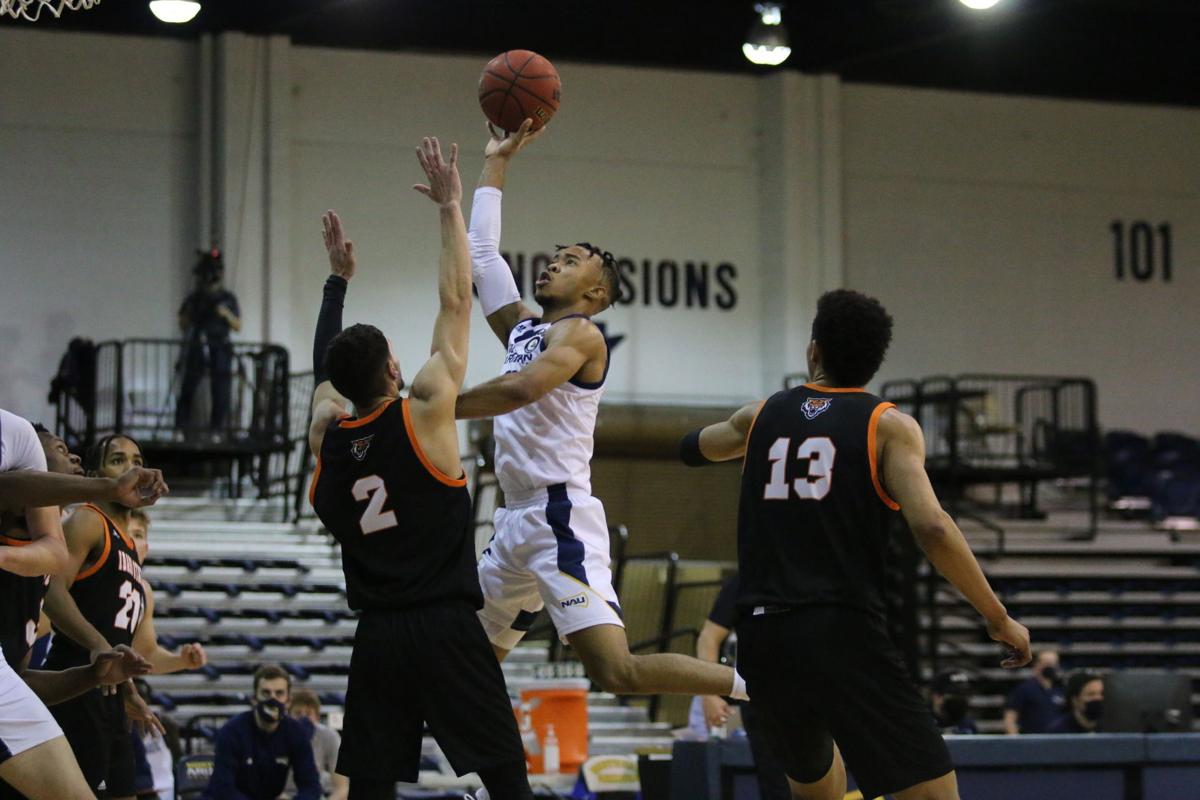 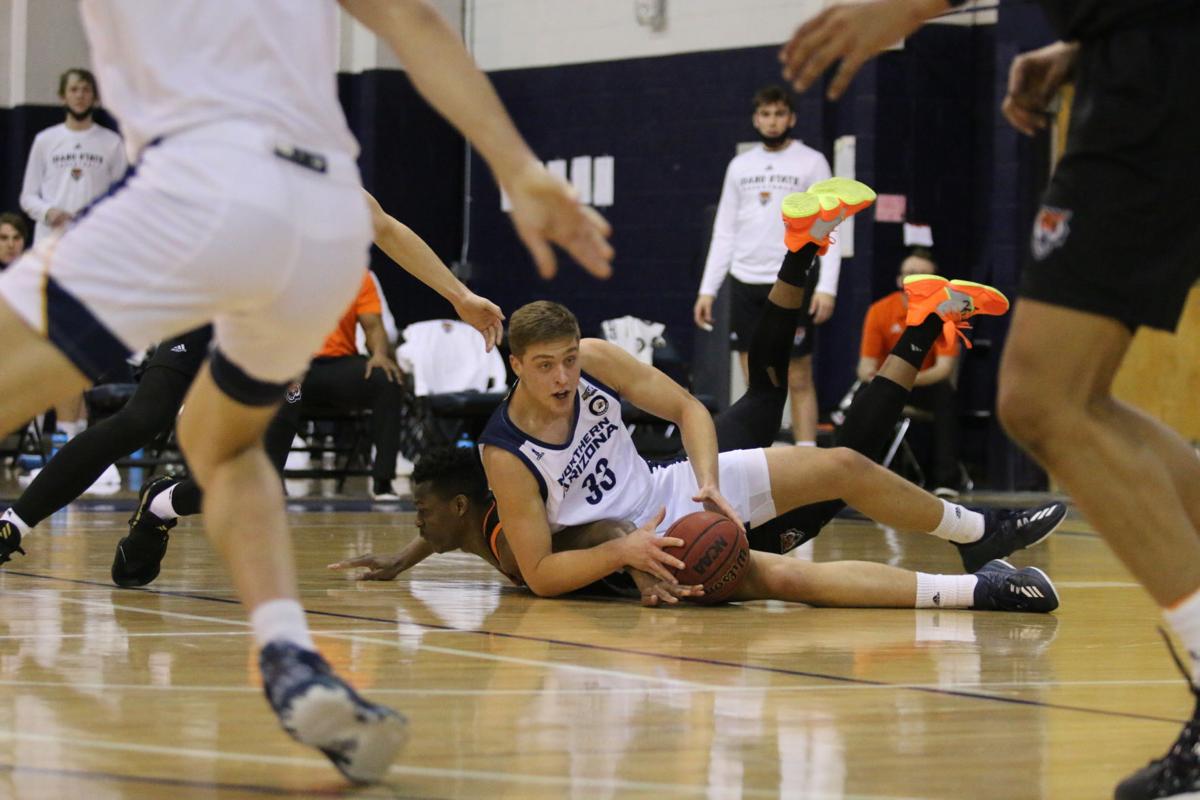 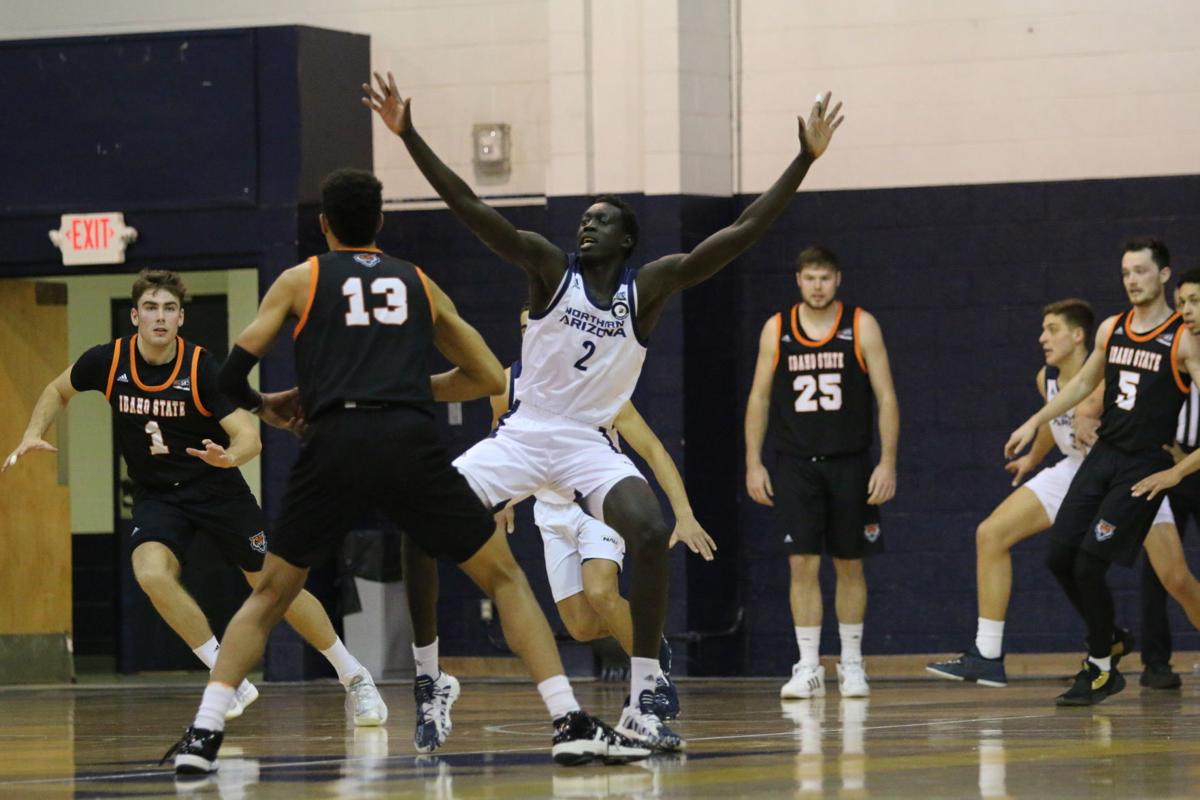 Idaho State and Northern Arizona men’s basketball have gotten into a habit of close calls dating back the last four games. Thursday night at the Rolle Activity Center kept that same theme rolling in a close and not-so-pretty game in which 46 total fouls were called.

The Lumberjacks led for much of the first half at home, but the visiting Bengals used an 11-0 run in the second half to take an eight-point lead. The run, sparked by a two 3-pointers by Robert Ford, was effectively enough as the Lumberjacks couldn’t climb back, losing 74-69 in the Rolle Activity Center.

The Lumberjacks played basically the entire game without starting guard and top 3-point shooter Luke Avdalovic, who left the game just over a minute in after he dove for a loose ball and suffered an apparent head injury. Lumberjacks head coach Shane Burcar confirmed in the postgame press conference that Avdalovic suffered a concussion and will likely miss some time going forward.

“It’s a concussion. That hurt, obviously; I think he played a minute and seven seconds,” Burcar said. “That hurts us for the whole game when you lose somebody like Luke Avdalovic. He will be out for an extended period of time, I’m assuming. … With the concussion protocol it is a minimum of seven days and he got hit pretty good. So I would not expect him to be ready for Montana.”

Later on, starting center Carson Towt fouled out with just under six minutes remaining in the second half.

Despite Avdalovic’s absence, Northern Arizona still shot a respectable 8 of 18 from 3-point range behind three apiece from Keith Haymon and Nik Mains -- who finished with nine and 15 points respectively.

But, Burcar noted, being down Avdalovic going forward changes the offense. Driving lanes are smaller with teams packing the paint more with the team being down one of the best shooters in the Big Sky.

At least Haymon has gotten out of his slump.

“We’ve been having a lot of success offensively -- and it has helped us defensively -- when Keith and Luke are on the floor at the same time,” Burcar said. “ … When you have guys like Keith Haymon and Luke Avdalovic on the floor, it changes the whole game.”

Lumberjacks guard Cameron Shelton led all scorers with 24, his seventh consecutive game with 20 or more points as he continues his scoring surge. He shot 7 of 19 from the field, 1 of 4 from deep and 9 of 10 from the charity stripe. He scored 17 of his 24 in the second half, getting rolling when Northern Arizona fell off a bit after leading 30-27 at halftime.

Things got close late and often in the second half, as the Lumberjacks made a solid comeback bid. Down 63-58 with just over three minutes left, neither team would score for over two minutes until Northern Arizona forward Ajang Aguek took three tries off a fast break to make it a three-point game.

The next Northern Arizona possession, Shelton forced his way inside for a layup, make it 63-62 with 1:11 left.

Idaho State pulled away with a quick 6-0 run off four free throws and a jumper in the lane by guard Tarik Cool -- who finished the night with 20 to lead the Bengals in scoring, hitting 18 of his 20 in the second half. From there Northern Arizona was forced to foul and hope for misses at the foul line and something offensively. Things didn’t work out that way, with Cool going 3 of 4 at the line late, and Northern Arizona was unable to get enough offense rolling to complete the comeback.

Northern Arizona was outrebounded 35-31, a number that doesn't look too bad on the surface, but Burcar said it was still something to address.

"It was very concerning," Burcar said. "They were coming into the game plus-10, and we had plenty of opportunities to get that rebound when we are up four, up six to go get the possession."

One player for Idaho State did the bulk of the glass work as Austen Smellie had four offensive boards on his own.

"We knew coming into the game he is a good offensive rebounder," Burcar said. " ... To be good we cannot do that. The minus four is a little deceiving."

Idaho State finished the game 22 of 26 from the foul line while Northern Arizona went 15 of 17 -- Shelton contributed nine of those makes. Northern Arizona was called for 25 fouls, 16 in the second half alone.

In that second half, Idaho State went 19 of 23 from the foul line while Northern Arizona hit 10 of 11.

The two will face off again in the Rolle Activity Center Saturday at noon.