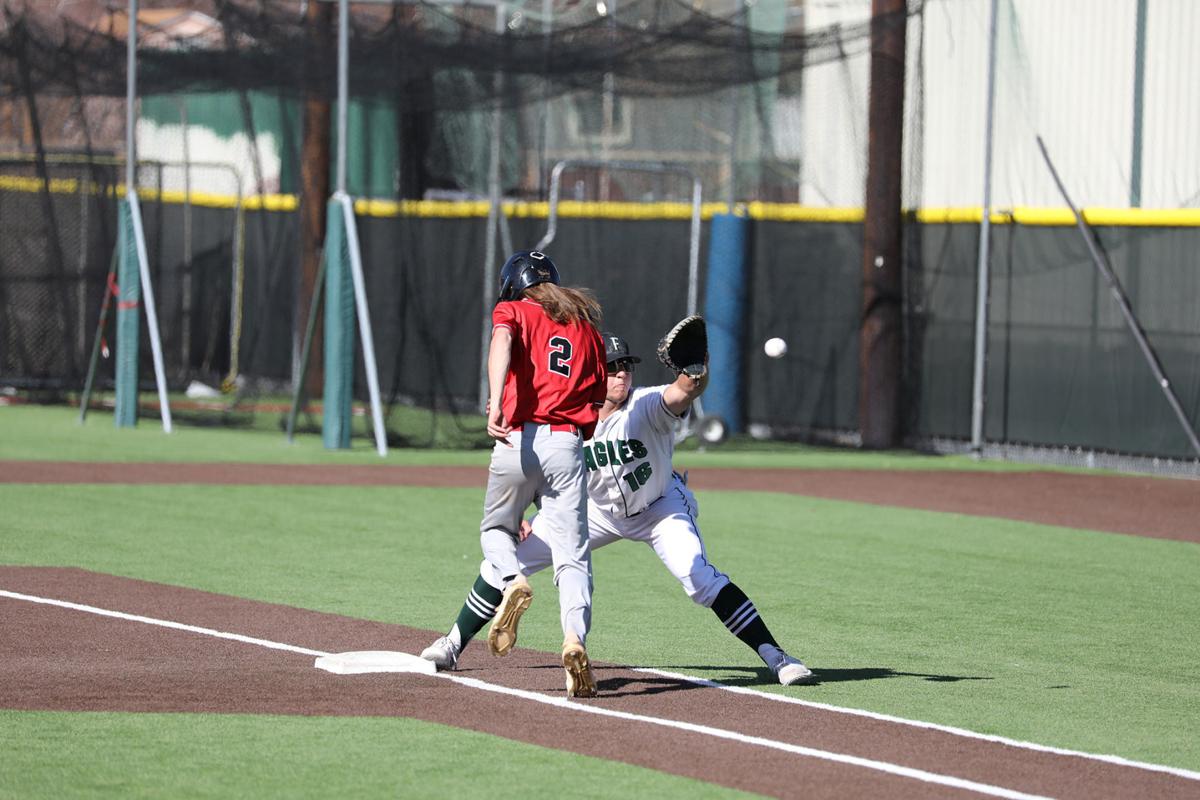 Flagstaff’s Spencer Smith (16) makes the out at first base during a game against Lee Williams Wednesday afternoon at Flagstaff High School. 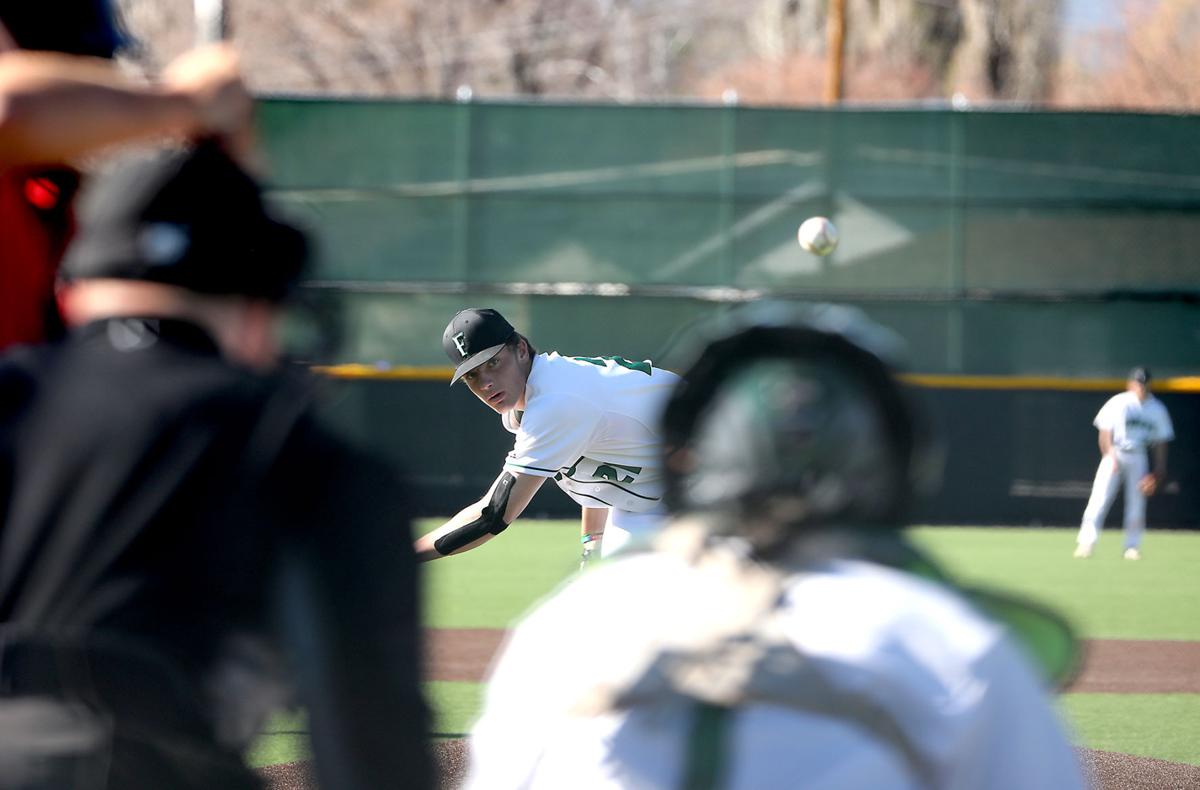 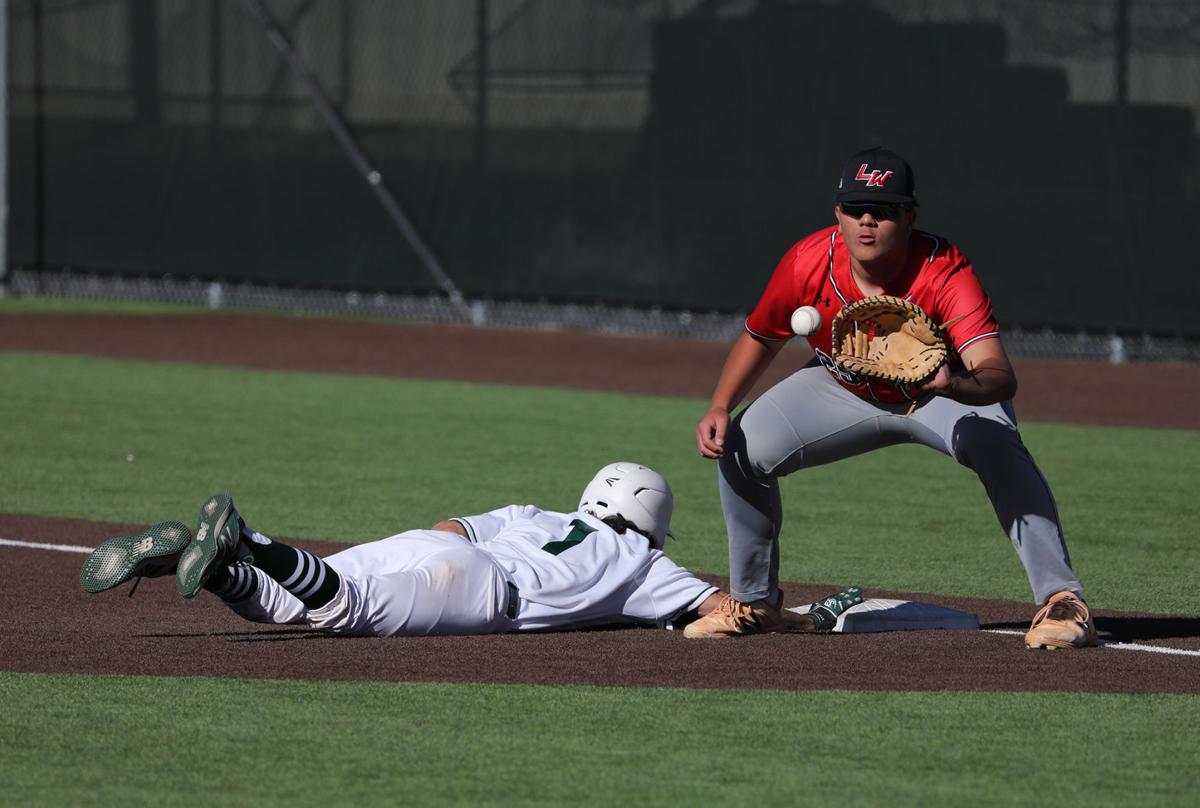 Flagstaff’s Tristen Figueroa (1) makes it back to first safely while pressuring the Lee Williams pitcher Wednesday afternoon during a game at Flagstaff High School.

The Eagles are one of four teams to start the 2021 season undefeated in the conference, and Flagstaff remained on that list with a 2-1 win over Grand Canyon Region rival Lee Williams at Flagstaff High School.

The Eagles moved to 9-0 overall and 5-0 in the region with the win.

The first two innings were pitching dominated for both squads, barely allowing any base runners and trusting their fielders. The Volunteers got the scoring started with an RBI double in the top of the third inning off Eagles senior pitcher Justin Hanson.

Hanson weathered the run to have a solid day on the mound, going 5 2/3 innings as he gave up three hits, walked three and struck out 11 batters.

“I would not say strikeouts are a focus for us on the mound, but we’re just trying to maintain pitch count so (Hanson) can go deeper into games,” Eagles manager Mike DoBosh said. “We want to be able to make plays behind him, but today was just a testament to his abilities and his skill level.”

Down 1-0 going into the bottom of the fourth, the Eagles did not let the Volunteers get comfortable as senior Sylas Clerry tied the game up with a leadoff solo home run, his second of the year.

Hanson got involved on the offensive side as well, connecting on a ball hit deep into the left field gap for an RBI double, giving the Eagles the 2-1 lead in the bottom of the fourth.

“We were just trying to get them motivated in that inning; we knew we were gonna have to grind out there,” DoBosh said. “The starter for Lee Williams that threw today is a really good ballplayer. He’s got a good fastball and he can command the offspeed stuff, so we knew that we may have had to play a little small ball, but luckily Sylas came up big and knocked a home run for us.”

The score stayed the same throughout the game, but the Volunteers kept up pressure on the Eagles. Flagstaff's Teague Van Dyke threw in relief for Hanson and quickly found himself in a bit of trouble.

Van Dyke had the bases loaded after inheriting a baserunner and giving up a single and a hit by pitch in the top of the sixth. However, the senior righty was calm under pressure and got a groundout to keep the lead for his squad.

Van Dyke took the mound again in the seventh, and easily got the job done with a 1-2-3 inning to end the game and keep the perfect run alive for the Eagles.

“We knew (Lee Williams) was going to come out and be tough, but you got to tip your cap to our guys for playing hard throughout the game,” DoBosh said. “It was a high-emotions game and we knew they would be good, but we handled our business and luckily scored enough runs to get the win and support Hanson out there.”

The Eagles continue to fly high and will try to keep the momentum going in preparation for their road matchup against the Volunteers Saturday.

After recording just one play of more than 10 yards in the first half, the Northern Arizona Lumberjacks came out firing after halftime as they…

Imagine running from Black Canyon City to Crown King and then through Prescott, Jerome and Sedona and on to Flagstaff, some 250 miles of (most…

The No. 20 Coconino Panthers softball team drew a tough matchup against the No. 5 Prescott Badgers Saturday but managed to make the game a bac…

Flagstaff’s Spencer Smith (16) makes the out at first base during a game against Lee Williams Wednesday afternoon at Flagstaff High School.

Flagstaff’s Tristen Figueroa (1) makes it back to first safely while pressuring the Lee Williams pitcher Wednesday afternoon during a game at Flagstaff High School.