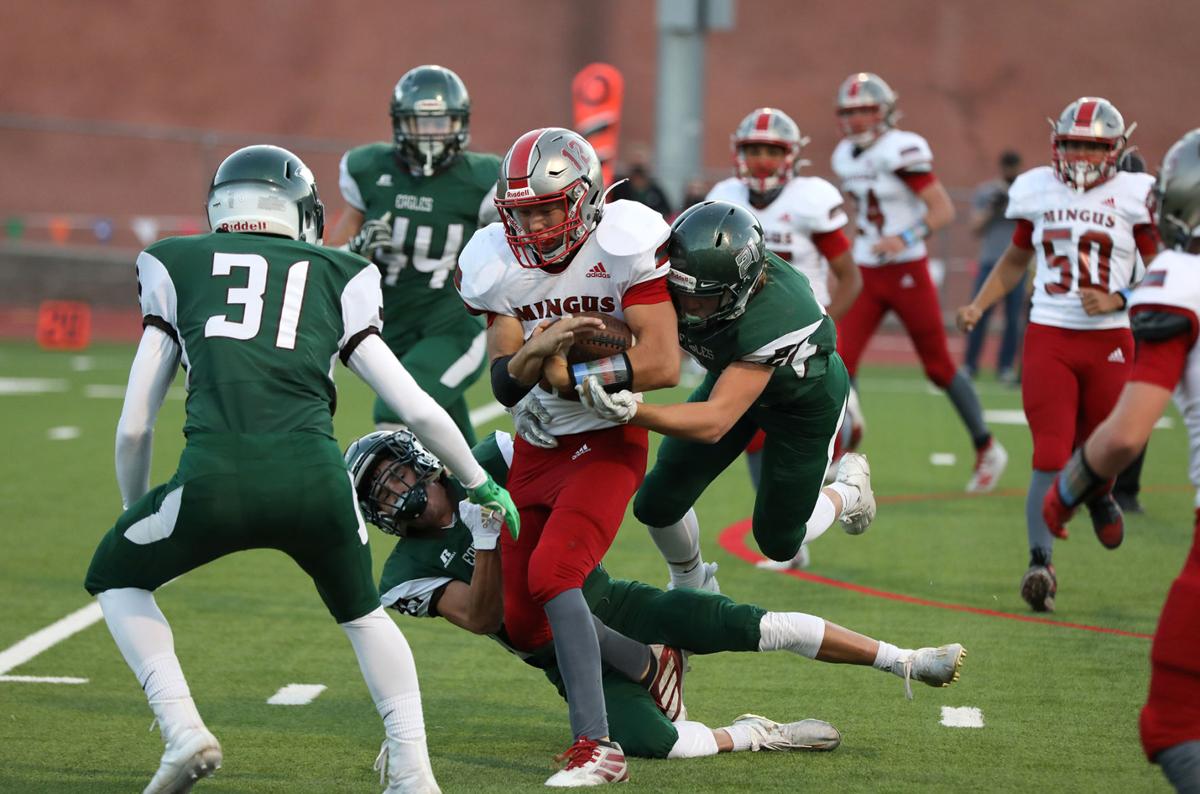 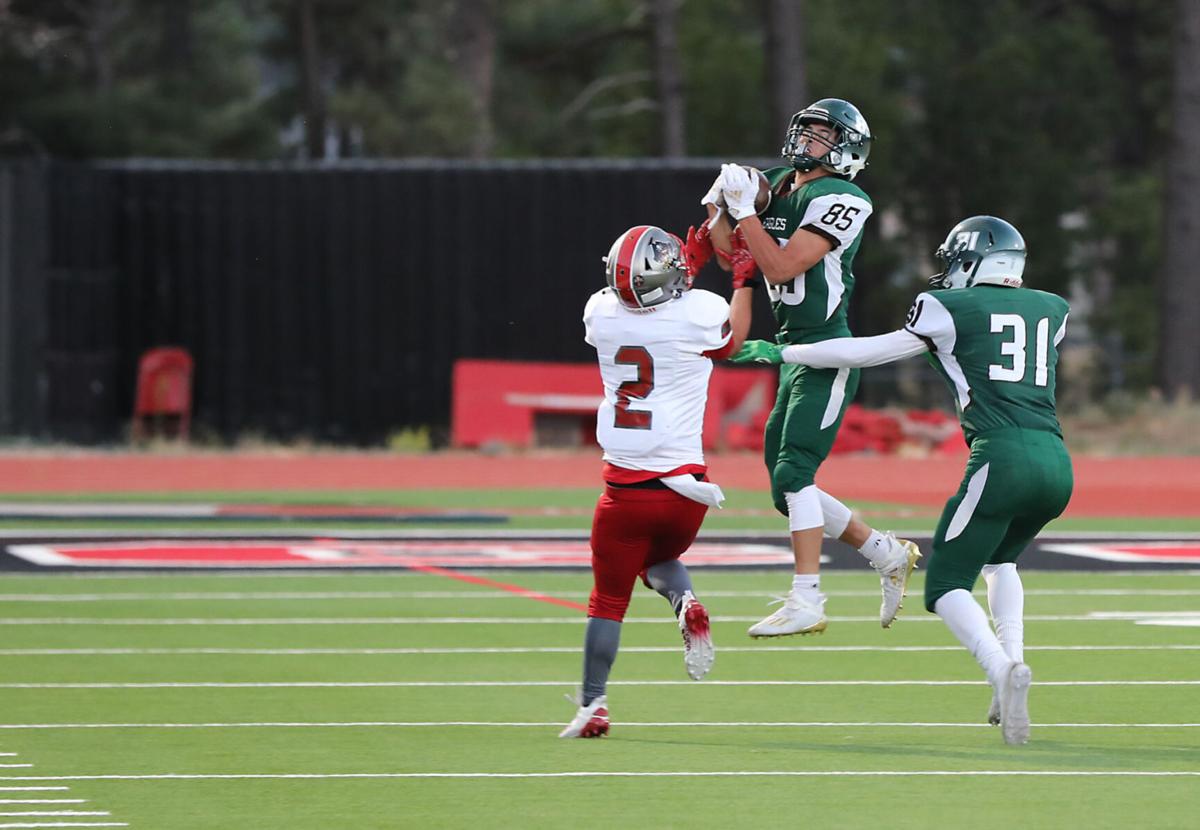 During his team's home opener, Flagstaff’s Jace Wetzel (85) breaks up a Mingus Union pass and nearly brings down the interception Friday night in  Cromer Stadium at Coconino High School.

It was ugly and there wasn’t much scoring, but Flagstaff didn’t need much in a defensive slugfest at Coconino High School on Friday to open the high school football season.

And in most defensive slugfests, teams don’t come out unscathed. Eagles star senior running back Luis Jaramillo was knocked out of the game at some point during the second quarter and did not return after he went through concussion protocol. His status going forward is unclear.

Jaramillo had a solid game before his injury, including two long gains of 69 yards — which was for a touchdown in the first quarter — and around 30 more yards called back due to penalties.

Even though Flagstaff's top option missed time, all Flagstaff needed was one score.

After he rifled a pass to tight end Nick Morrow for a big gain down the middle on a third down, Eagles quarterback Morgan Bewley orchestrated his team's cleanest offensive drive of the night.

Bewley struggled for the most part, except for the scoring drive. He went 12-for-18 passing and threw two interceptions that were a bit unforced -- one of which being an overthrow. Bewley showed some life with his legs, rushing for 32 yards on nine carries.

The first-year starting quarterback settled in after the shaky start, much to the delight of Eagles head coach Todd Hanley.

“I think he just finally settled in,” Hanley said. “He didn’t have much varsity experience and they did some good things defensively. I’m not gonna take anything away from Mingus; they played a good game too. I thought they were a real quality team, and we were lucky to get out of there with a win. I don’t think anything changed, I just think he settled in.”

Another player who stepped up when needed due to Jaramillo’s injury was junior running back Marcus Salcido, who rushed for 51 yards on eight carries -- most of which coming in the second half when Jaramillo was sidelined.

“He had some great runs and nice plays,” Hanley said. “When you can do that well, a lot of things will open up.”

Mingus had a chance late after Flagstaff pinned Mingus at its own 5-yard line on a punt by Kent Davison -- the Eagles' backup punter to Jaramillo.

Mingus got the ball up to midfield and was forced to attempt a deep pass. The pass was incomplete, but a Flagstaff hands-to-the-face penalty gave the visitors another shot at a fourth-and-short play.

Flagstaff got the stop, keeping Mingus from the comeback and sealing the win at Cromer Stadium.

Things to clean up

With a 7-0 score, it shouldn’t come as a shock that the Eagles have some things to clean up going forward.

Bewley had a turnover early in the first quarter when the Eagles were knocking on the door near the Mingus end zone. But a botched snap led to a turnover. That turnover, along with some miscues throughout the game, can be expected to a point because Flagstaff -- and many other teams in the state -- didn’t get the chance to scrimmage or practice fully during the pandemic delay.

“This was basically a scrimmage that counts,” Hanley said. “I’m not taking away from Mingus who actually did scrimmage. We overcame it and God bless our defense, man.”

Flagstaff isn't the only team with stuff to clean up either.

Late in the fourth Mingus went from a chance to tie the game in Flagstaff territory to being in a massive hole. The Marauders were called for two penalties after the Eagles sacked quarterback Zachary Harrison -- putting the Marauders back into their own territory and the insanely rare fourth down and 48. Mingus did not convert, but did bomb a 50-yard punt to flip the field.

During his team's home opener, Flagstaff’s Jace Wetzel (85) breaks up a Mingus Union pass and nearly brings down the interception Friday night in  Cromer Stadium at Coconino High School.