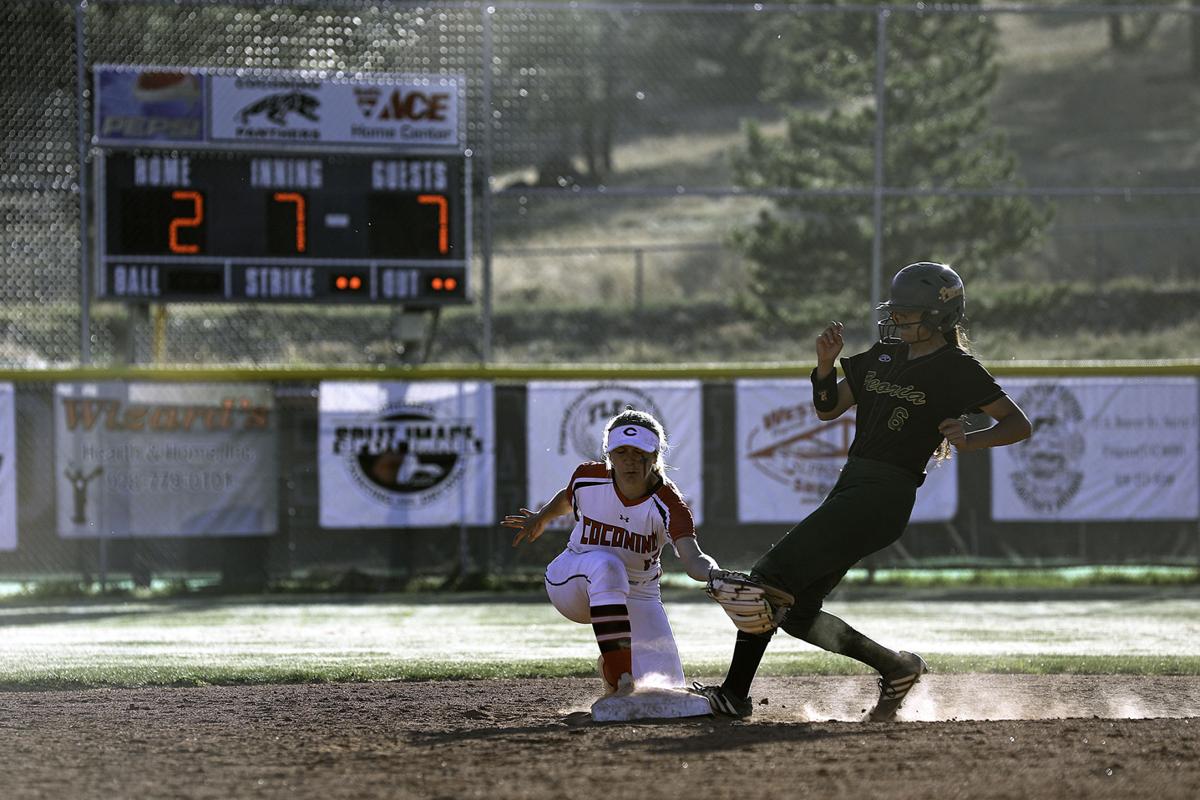 Coconino's KodyLynn Watson (12) tags out Peoria's runner during a game against the visiting Panthers Friday afternoon at Coconino High School. For an online photo gallery of the game, visit azdailysun.com. 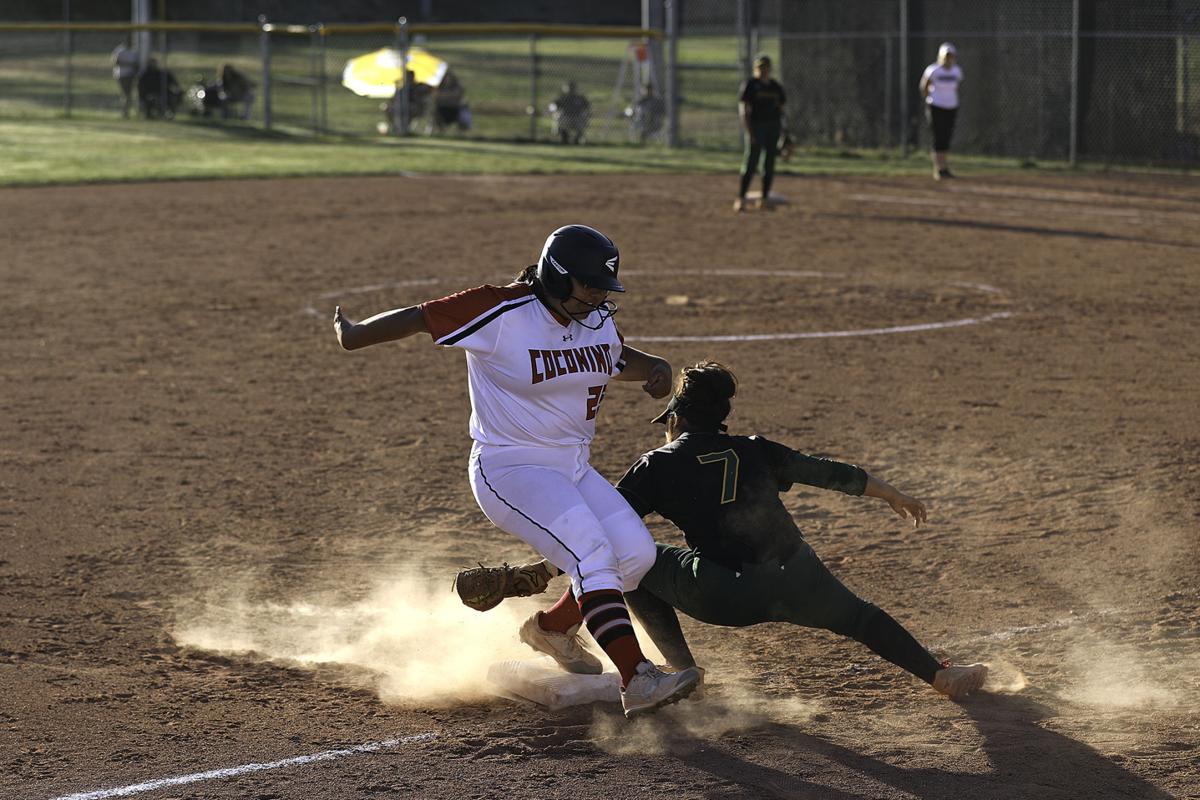 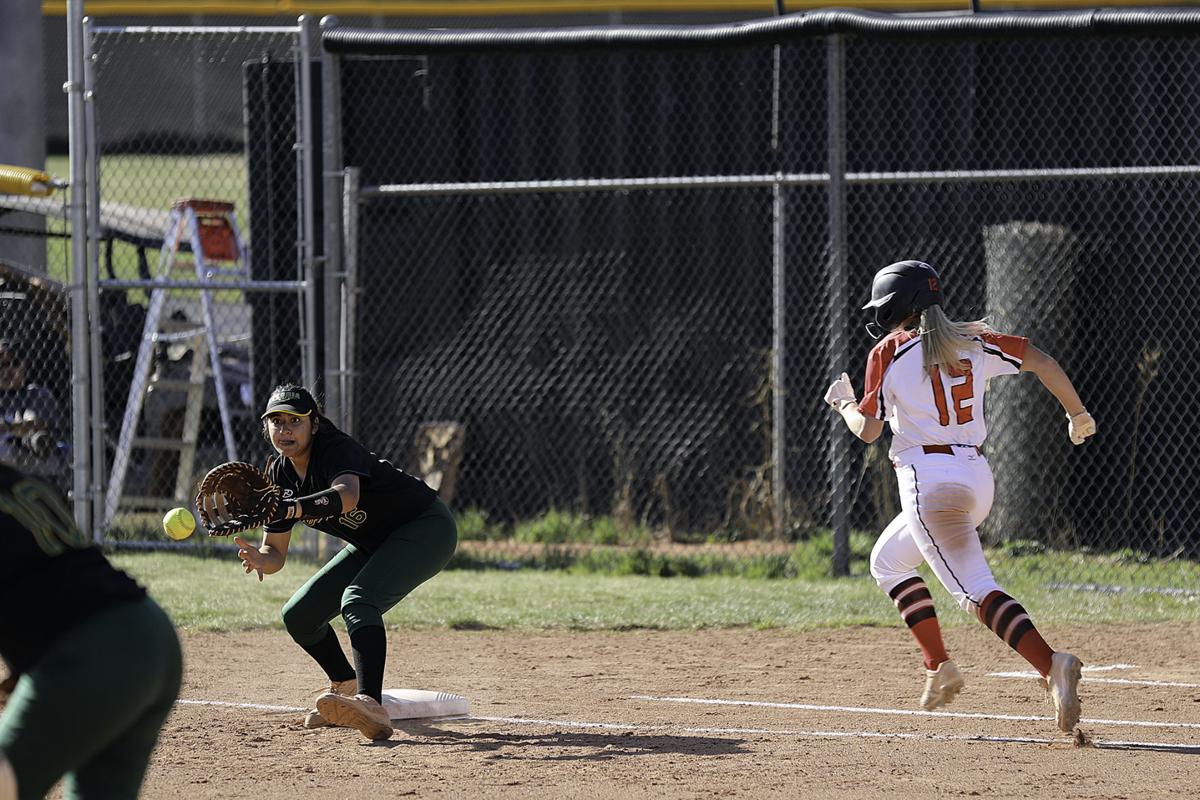 Coconino's KodyLynn Watson (12) races to first during a game Friday at Coconino High School against Peoria. 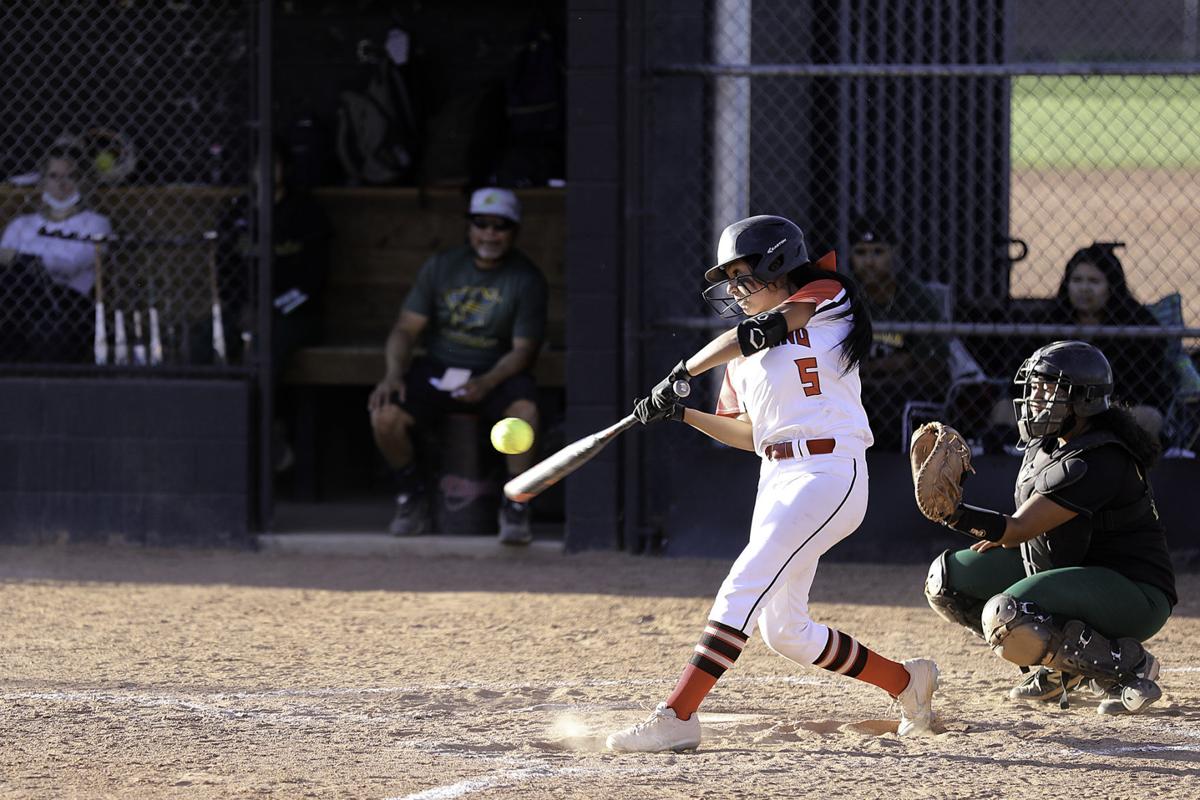 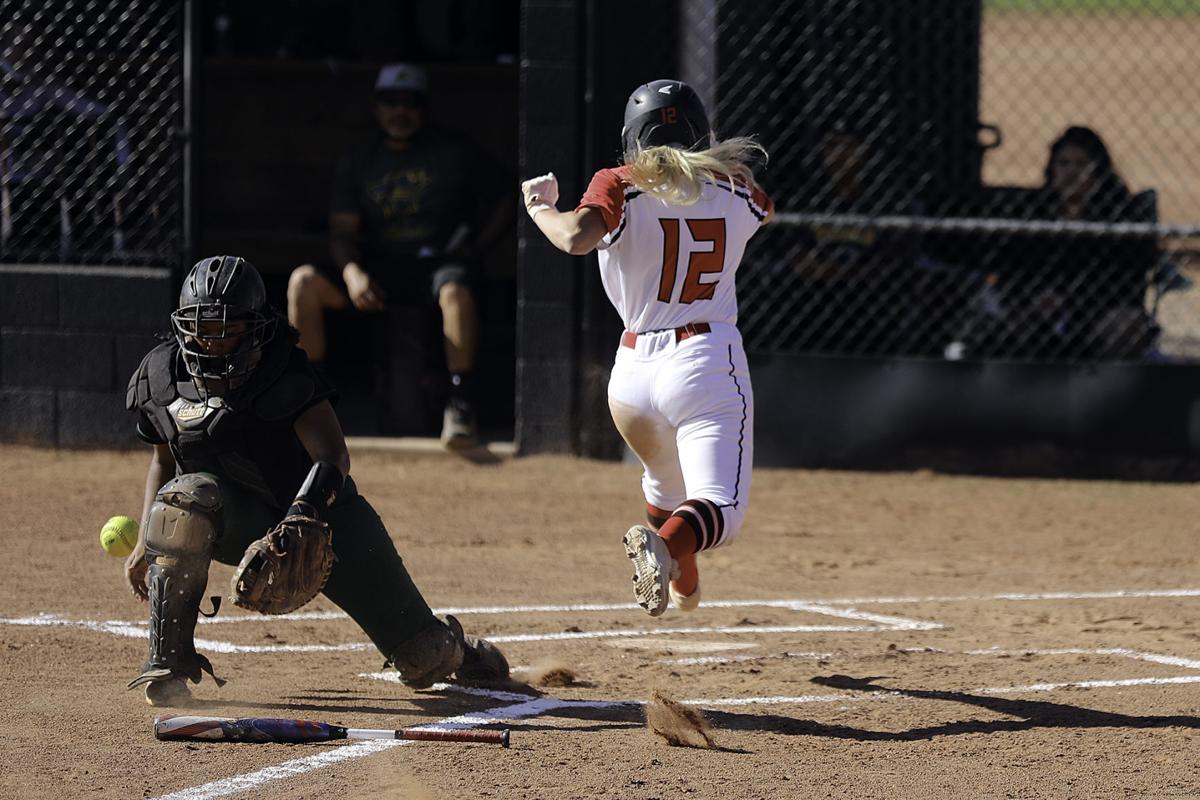 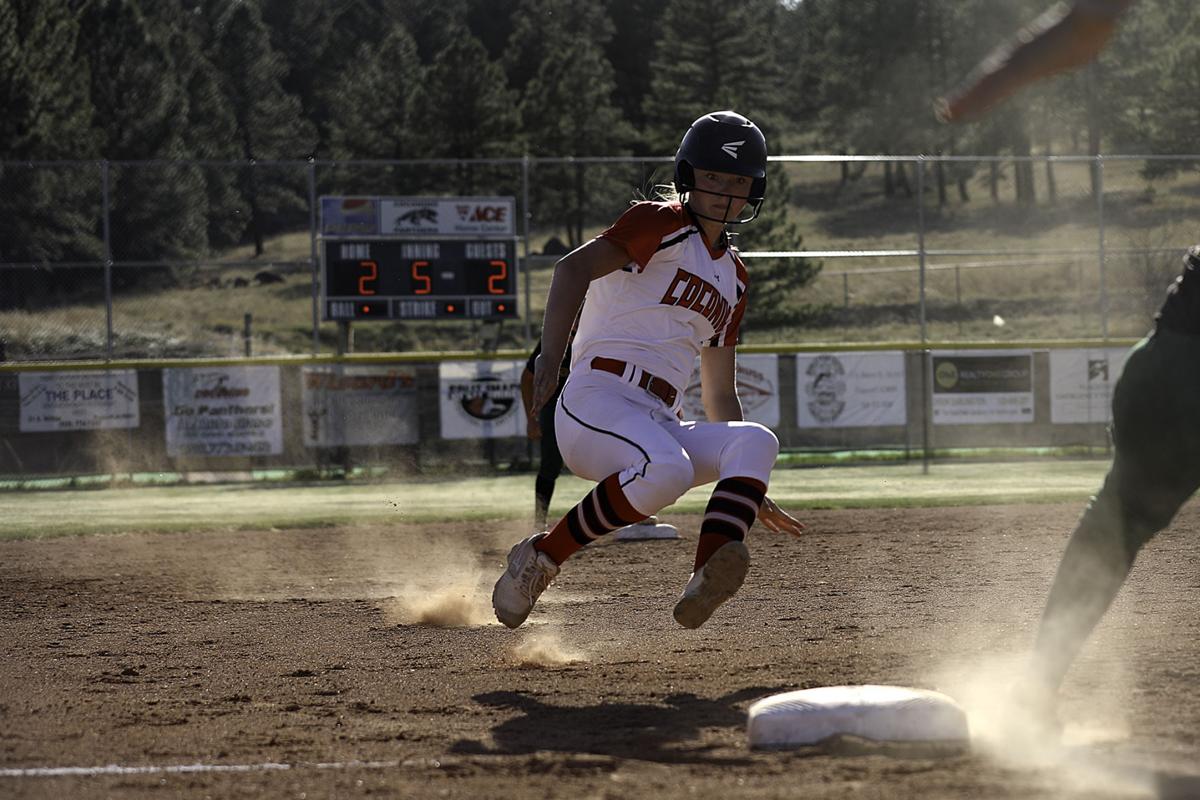 Coconino's Cierra Derr (3) slides safely into third base during a game against Peoria Friday at Coconino High School.

The Coconino Panthers took an early 1-0 lead in the first inning against the No. 14 Peoria Panthers (13-6) and that score held until the fourth. The teams traded runs, and Coconino still led 2-1 after four and Peoria tacked on one more to tie the game at 2-2 heading into the sixth inning.

Then, Peoria hit two solo home runs to take the lead in the sixth inning and added three more in the seventh behind a series of infield hits and solid base running. Coconino scored two in the final frame but was unable to catch up.

Despite the loss, coach Kimberly Dennis was proud of her team’s fielding.

“The biggest thing for today for how we’ve been performing lately is our defense. We only had one error defensively, which I was proud of because we’ve been working on that. But our bats just let us down,” she said.

Offensively, freshman Samantha Rodriguez stood out for Coconino. She went 2 for 3 with two doubles and as many RBI.

“She had a nice game today," Dennis said. "She’s kind of gone up and down this season a little bit this season, but she’s someone that we look to for good at-bats and some power and she had a good day today.”

Following the loss, the Panthers (4-12) have two games remaining in the season, an away and home contest against No. 27 Mohave (4-13) on May 4 and 5, respectively. A berth in the 4A playoffs may be out of reach, but Dennis said there is still motivation to perform in the Panther’s final back-to-back slate.

“I liked how the girls came back today defensively and we can take some lessons. We want to try and win the final two for our seniors, that’s our goal,” Dennis said.

Coconino's KodyLynn Watson (12) tags out Peoria's runner during a game against the visiting Panthers Friday afternoon at Coconino High School. For an online photo gallery of the game, visit azdailysun.com.

Coconino's KodyLynn Watson (12) races to first during a game Friday at Coconino High School against Peoria.

Coconino's Cierra Derr (3) slides safely into third base during a game against Peoria Friday at Coconino High School.