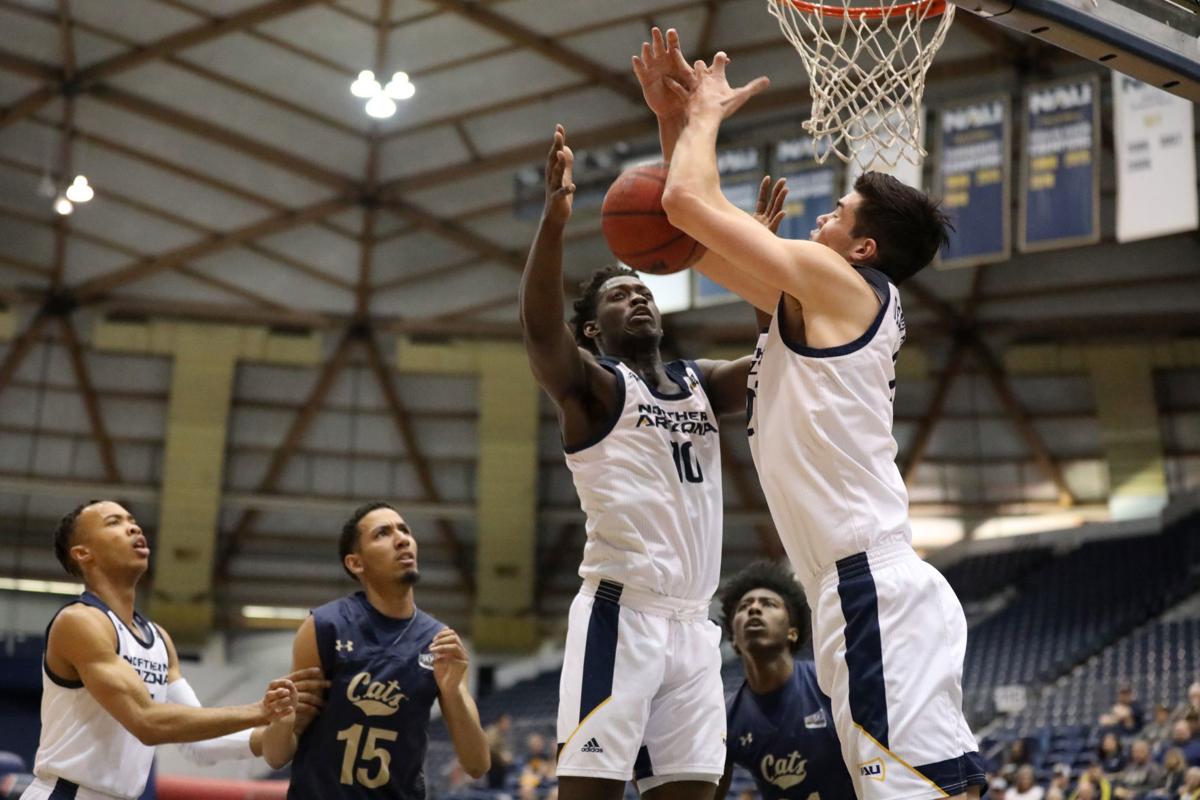 Former Northern Arizona forward Bernie Andre (10) and teammate Brooks DeBisschop try to come down with a rebound during a game against Montana State at the Walkup Skydome during the 2019-20 season. 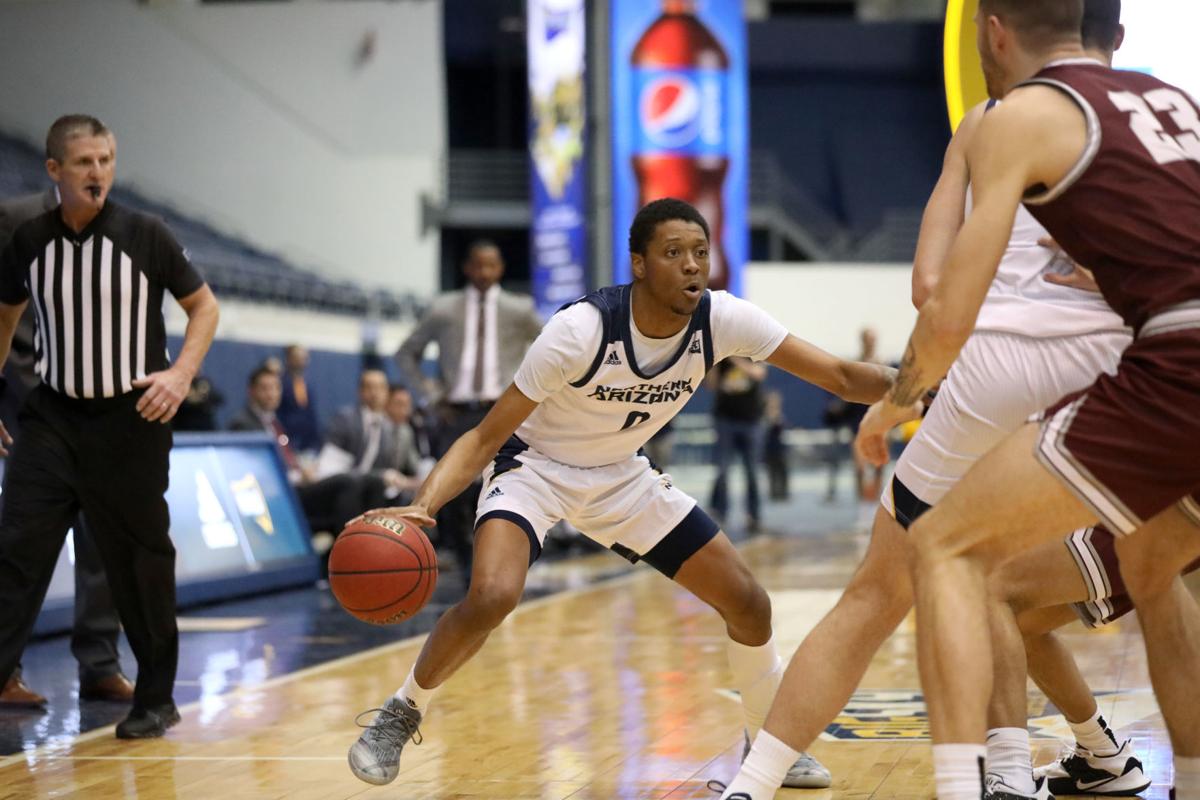 Former Northern Arizona guard Cameron Satterwhite (0) tries to move off of a screen during a game against Montana in the Walkup Skydome in the 2019-20 season.

Shane Burcar had just been named the Northern Arizona men’s basketball head coach. Then, not even a full two hours after the end of his introductory press conference Friday, news broke that a second key player decided to transfer.

Both Bernie Andre and Cameron Satterwhite chose to move out of the Lumberjacks' program over the past week, electing to grad transfer in search of bigger opportunities.

Andre committed to Vermont, an American East Conference powerhouse and regular fixture in the NCAA Tournament, on Tuesday. On Wednesday, news broke that Satterwhite decided to take his talents to Montana, Northern Arizona's Big Sky rival and consistent powerhouse, in a rare in-conference transfer.

In an interview with Missoulian sports reporter Jordan Hansen, Satterwhite noted the winning culture of the Montana program and its ability to elevate guard play -- along with his own history with the Grizzlies.

"I was really heavily recruited by them, so I felt the love from the jump," Satterwhite told Hansen. " ... There's no bad blood at all with the (Northern Arizona) players and coaching staff, none of that. It was just more of a personal decision."

Add Andre and Satterwhite to the graduations of Brooks DeBisschop and Chris Bowling -- along with the mid-season departure of Ted McCree -- and Burcar and his staff have some creative retooling to do with two full scholarships remaining.

The last time Northern Arizona lost that type of production following a winning season was when the team went from 23 wins in 2014-15 to just five in 2015-16 under then-head coach Jack Murphy.

Although the upcoming change isn’t nearly as drastic, there are still some parallels between the two spans.

The 2015-16 team had just a 29.8% minute continuity stat on KenPom.com, a mark that was near the bottom of the nation as the team entered the year with just four players with more than 25 minutes of playing time at the Division I level.

Five true freshmen and one redshirt freshman were tasked with playing massive minutes in 2015-16 for a Lumberjacks team that saw its only two seniors miss the majority of the year due to injuries. The expected upcoming version of the Lumberjacks has zero seniors, but do have a pair of redshirt juniors in Luke Avdalovic and Nik Mains, and brings in three freshmen along with two first-year players who are now eligible to play.

There are some eerie comparisons on paper between the two stretches, as Northern Arizona has even less in terms of playing experience going from this past season to next compared to the disastrous stretch under Murphy. Burcar isn’t too worried, however, about how the team will adjust.

"I'm not concerned about replacing the guys who aren't here," Burcar said. "The program is something that we recruited knowing there's a possibility of those guys transferring. I have great confidence in the guys we have."

Northern Arizona returns just two players who started at least 20 games a year ago in Avdalovic and All-Big Sky guard Cameron Shelton. Those two certainly are talented enough to get their own production, but without help surrounding them, defenses will be able to key on them even more than they did in 2019-20.

Shelton’s main skill is his ability to get to the rim in traffic, but he needs floor spacing to do so at a high level. Avdalovic provides some spacing, but without other shooters or playmakers, defenses can stick on Avdalovic even more and clog Shelton's driving lanes.

"Obviously we are researching who is the best fit to be a Lumberjack, whether a high school senior, a junior college kid or a grad transfer," Burcar said. " ... We're in no hurry. We could go into next season with no seniors and we would be OK with that."

The possibility of transfers has already run its course somewhat. Northern Arizona will have transfer forwards Adrease Jackson and Carson Towt be eligible next season, receiving much-needed depth in the frontcourt.

The two are built in the mold of DeBisschop physically, and are athletic enough to thrive in pick and rolls. Replicating DeBisschop’s passing may not happen, but the two should be able to contend defensively and on the glass.

A transfer wing or bigger guard could help, especially defensively, although the Lumberjacks have youngsters such as Lewis and Haymon on the roster. The two showed glimpses of what they can do in extended time, Lewis with his versatility and Haymon’s ability to be a knock-down shooter.

Getting transfers could be tough, as the NCAA extended its recruiting dead period through May 31 due to the ongoing COVID-19 pandemic. In-person visits are not permitted in that period, but phone calls and electronic communication is allowed.

Harris and Mahaney could walk in to some early playing time at guard due to Satterwhite’s departure.

In Burcar’s offense, which relies on strong point guard play, the two could possibly play big minutes as Shelton’s backup -- or even next to him in dual point guard lineups. Satterwhite was the de facto backup point a year ago but even then Shelton still played a whopping 35 minutes per game, the sixth most in the Big Sky.

Unless Northern Arizona can secure a transfer from an off-guard, Harris and Mahaney could see time in the rotation.

Former Northern Arizona forward Bernie Andre (10) and teammate Brooks DeBisschop try to come down with a rebound during a game against Montana State at the Walkup Skydome during the 2019-20 season.

Former Northern Arizona guard Cameron Satterwhite (0) tries to move off of a screen during a game against Montana in the Walkup Skydome in the 2019-20 season.