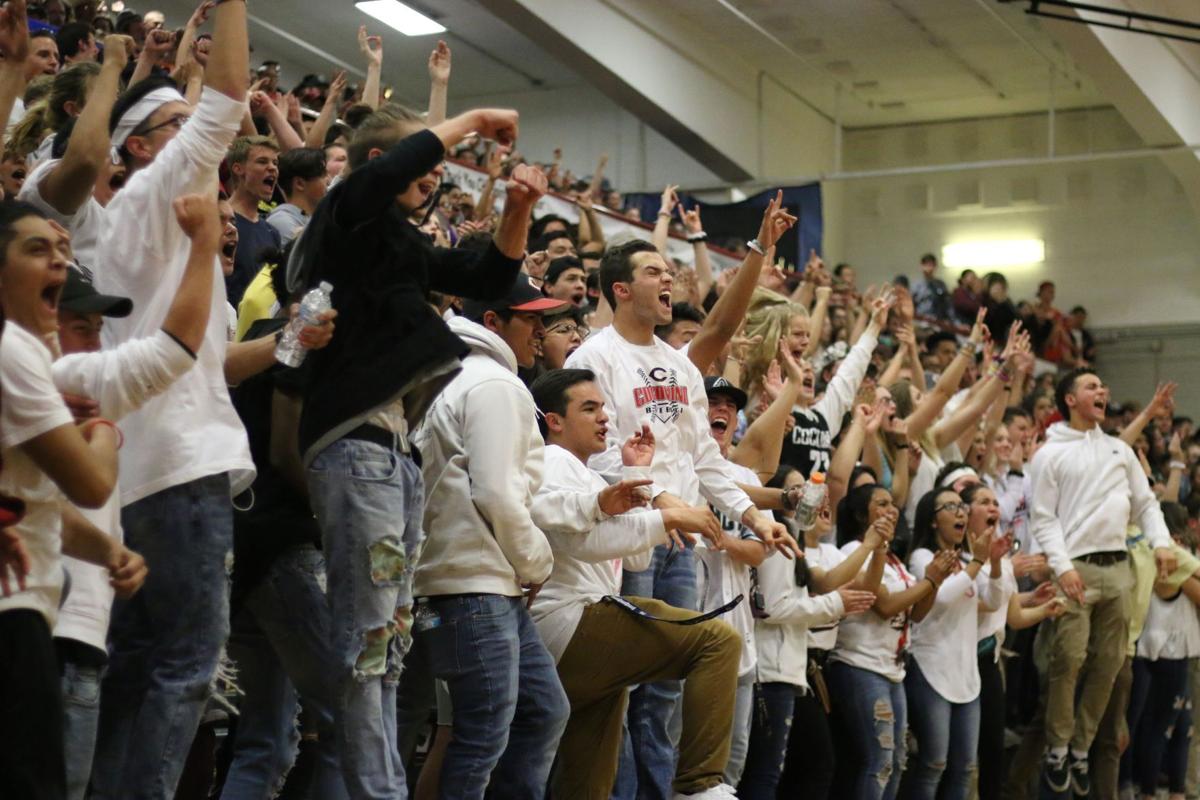 In this Feb. 10, 2018, file photo, Coconino's student section jumps in celebration after the Panthers hit a shot during a boys basketball state tournament game against Flagstaff. 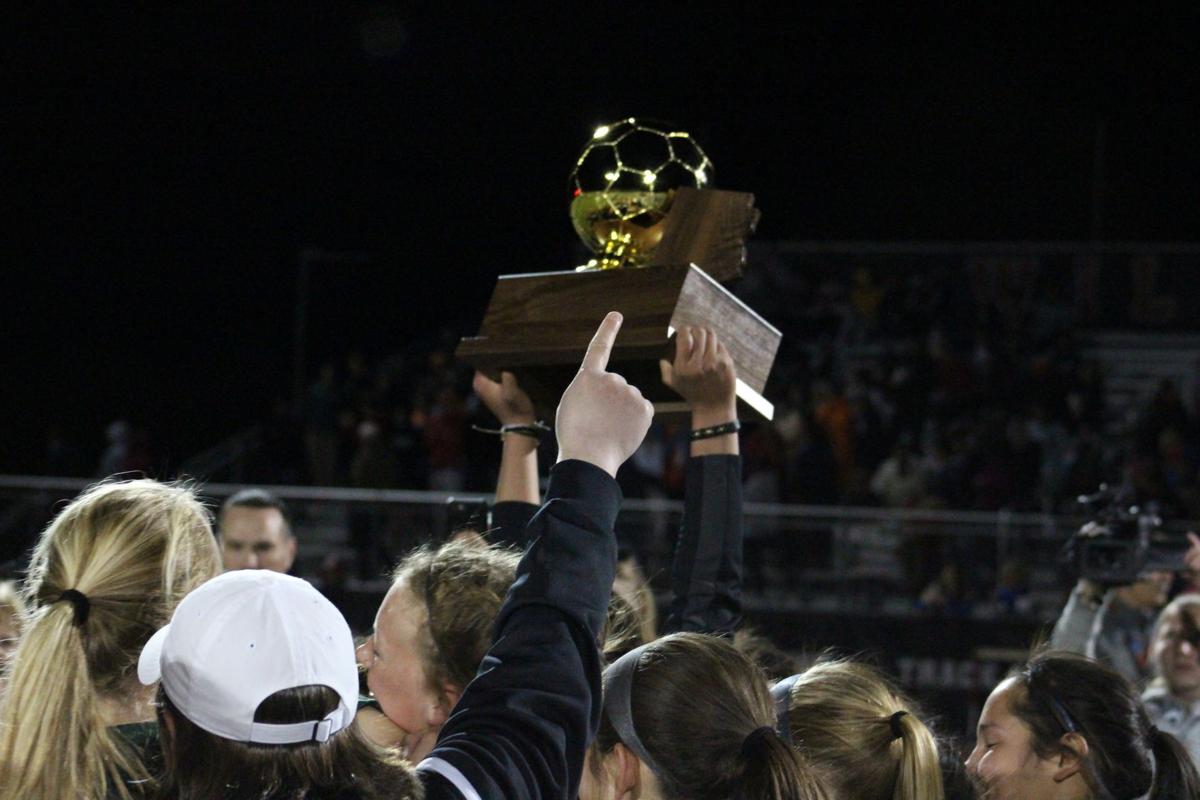 Following pushback from member schools, athletes and parents, the Arizona Interscholastic Association has reversed course and will have a winter high school sports season.

The AIA Executive Board initially voted Friday, 5-4, against having a winter sports season due to concerns about hospital capacity in Arizona, which has been deemed the No. 1 hot spot for COVID-19 cases in the United States. But during an emergency board meeting Tuesday morning the AIA voted 5-4 to have winter sports start with key modifications: all athletes will wear masks, whether in games or not. The board also unanimously passed a vote to let local schools and districts to allow at most two parents per athlete depending on their health guidelines and rules.

Previously, during the fall, athletes didn't have to wear masks or face coverings while competing, and a reduced amount of fans were allowed. In the City of Flagstaff, schools were allowed a limited amount of people per athlete. Now, the AIA determined at most two parents or guardians per athlete are allowed. Media attendance is allowed but will be dependent on each school and district.

Schools will also be required to complete a COVID-19 athlete/coach monitoring form the day of all games and provide a copy to the opposing school prior to the game or competition. Any school that violates any of the required changes will lose access to AIA officiating, the AIA determined.

At the local level, Flagstaff Unified School District confirmed to the Daily Sun in a Tuesday email that it will allow teams to restart practices beginning Wednesday. FUSD will not allow any fans, despite the AIA allowing at most two parents.

Jim Love, who works with the Flowing Wells Unified Arizona School Boards Association, was the swing vote after he originally voted "no" on Friday. Jeannine Brandel, Flagstaff High School athletics director, voted yes, which she also did Friday.

"We can cancel sports on our campuses, but they will still play," Brandel said, noting her opinion that athletes are safer with the AIA rather than club sports, which she thinks has fewer rules and restrictions than the AIA.

Some club leagues are stricter than others, with some enforcing mask rules while others don't leaving inconsistency from event to event. Brandel later clarified her stance on the AIA being safer than club sports during a Tuesday night phone interview.

"I think club sports are great and I think they do a good job," Brandel said. "I just believe that athletic directors, athletic trainers and the coaches in the high school settings are very much educationally based. We spend a lot of time with our kids and we do everything we can to follow all of the modifications and mitigation plans. I think kids are safest at school."

The vote came the same day that Arizona reported 335 new COVID-19 deaths and more than 8,500 new cases. There were more than 700 deaths reported in the past week.

The vote is directly against what the Sports Medicine Advisory Committee recommended Friday due to the rising and concerning rate of positive COVID-19 cases in the state of Arizona. Tim Carter, Zack Munoz, William Duarte and Ricky Greer -- who represents the 2A Conference and many reservation and rural schools -- voted against winter sports happening at this time.

The SMAC was concerned about ICU capacity, noting Friday that, at the time, 93% of all ICU beds and 92% of all inpatient beds are in use. The lack of space raised the issue for the SMAC and other medical professionals in contact with board members that athletes would be turned away from care, or take up valuable and needed space.

"How do we not take the opinion of medical experts?" Greer asked during the meeting.

In Coconino County, health officials reported Tuesday the county is currently at substantial community spread with 659.3 cases per 100,000 residents and a 19.8% positivity rate. The county reported 87 new cases Tuesday and three more deaths.

The vote was still close, with a few members holding out against sports due to health and safety concerns. Some noted concerns of spread of COVID-19 related to sports, and others noted how some parents and teams are not properly reporting cases like they are supposed to.

Those who voted against reiterated that the AIA should not go against the recommendations of the SMAC, which holds firm against starting winter sports at this time.

The AIA has already changed the metrics used to determine if winter sports can happen. The AIA is not using the data it required prior to the fall sports season, which was mentioned during the Tuesday meeting as a want from the SMAC as well.

Assuming the current schedule holds, the Flagstaff boys basketball team will open the season Tuesday at crosstown rival Coconino while the Flagstaff girls will host Coconino.

Remote learning is not becoming any easier after nearly a year, some Flagstaff families say, leading them to band together to search for a way…

Flagstaff Unified School District and Coconino Community College campuses will be closed Monday, Jan. 25 due to inclement weather. Both FUSD a…

In this Feb. 10, 2018, file photo, Coconino's student section jumps in celebration after the Panthers hit a shot during a boys basketball state tournament game against Flagstaff.