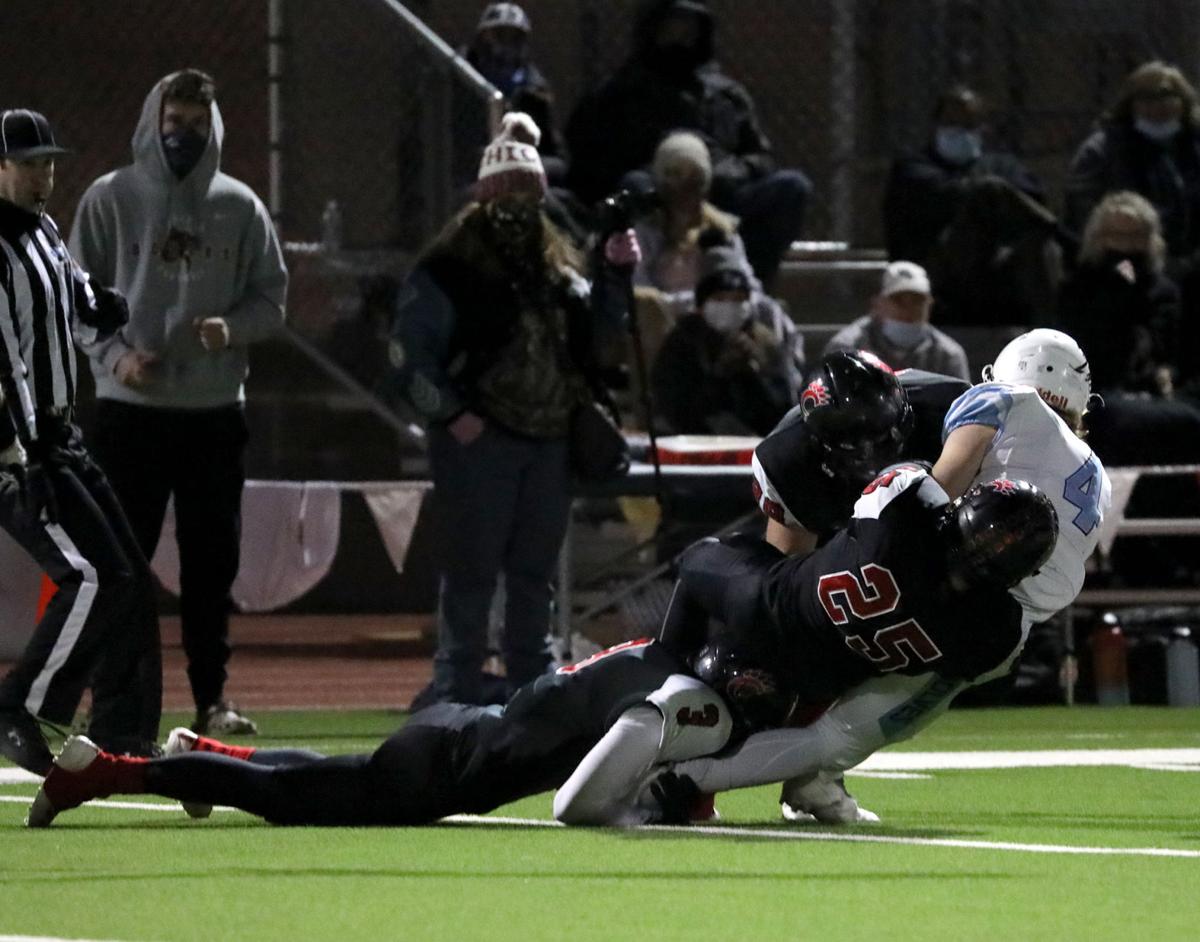 Coconino’s Pierson Watson (25) and a couple of teammates wrap up the Estrella Foothills quarterback during the 4A Conference state tournament play-in game at Cromer Stadium.

After shutting down one high-powered offense in the 4A Conference state tournament play-in round, the Coconino Panthers are going to have to do it again this week in the quarterfinals.

A week ago the Coconino defense held a dangerous Estrella Foothills offense to zero points for the better part of three quarters. It took over 36 minutes of game time for the visiting Wolves to find the end zone last week at Cromer Stadium in a 35-22 loss to the hosting Panthers.

The next day, following the release of the full 4A playoff bracket Saturday morning, Coconino (8-0, 6-0 4A Grand Canyon) was seeded fifth and scheduled to face the No. 4 Cactus Cobras (6-2, 3-0 West Valley) on the road.

First round of 4A state playoffs

Just like last week, the Panthers get another offense capable of scoring at a high clip. In five of their six wins this season, the Cobras have scored more than 50 points, including in the play-in round, three times, 60 once and at least 43 in the other two.

Cactus put up 45 on the Flagstaff Eagles on Halloween at Cromer Stadium for a win and is coming off a 59-7 home victory over the Prescott Badgers.

"We're excited. They obviously are talented, they got depth, they got great coaches, but in our eyes we've been preparing for this match-up for quite some time," Panthers head coach Mike Lapsley said Wednesday night during a phone interview. "Truth be told, we've been preparing for this all the way back to summer, knowing that you got to be able to beat these kind of guys to accomplish your goals."

Those goals? Well it sounds like a cliche, but it's to win a 4A state title and cement themselves as contenders.

While the Wolves had a pass-heavy offense, the Cobras are more versatile and balanced. For the season the Cobras are nearly equal in passing and rushing yards, with 178 yards through the air per game and 169 yards per game on the ground.

Two different players have gotten substantial snaps at quarterback for Cactus in Will Galvan and Chase Jasinski. Galvan has been the main option, throwing for 998 yards, 11 touchdowns and eight interceptions so far this year but the latter is often used.

The trick with Galvan is, well, he isn't just a QB.

He also has rushed for 210 yards and three scores, and leads Cactus in rushing attempts at 71, and the sophomore has 12 catches for 155 yards and two scores as a receiver. Add up all his production and Galvan has 1,363 total yards of offense across passing, rushing and receiving along with 16 total TDs.

Cactus will often split Galvan out wide or use him elsewhere while Jasinski runs quarterback -- giving the Cobras an added level of versatility.

"It gives them a good look, we know that," Lapsley said. "Our defensive coordinator (Dalton Schwetz) has been on point this whole week adjusting to the tempo that they play at and making sure that we identify their sub-packages. All that kinda of stuff we've been really locked in to basically since last Saturday. We are going to be prepared for it the best we can."

Defensively Cactus hasn't allowed more than two scores in any of its wins except when it allowed Northwest Christian to score 19 points in a one-point Cactus win.

Coconino on the other hand has scored at least 28 points in each game this year, while giving up less than 14 or less four times.

There's a bit of recent history between the two programs -- but it's a bit one-sided.

Cactus has beaten Coconino in back-to-back seasons, taking a 32-21 win at Cactus in 2018 and a 53-14 blowout last season at Cromer. Last season's result was the only blemish on the Panthers' 9-1 regular-season record and the 2018 loss kept the Panthers out of the 4A state tournament.

Cactus has dealt some blows to the Coconino program recently, and knowing that, there's a bit extra to Friday night's game aside from the excitement of the playoffs.

"The players don't necessarily talk about it a lot," Lapsley said. "It's one of those things that I am sure it's unspoken and in the back of their minds."

If Coconino pulls out the win Friday night, it would be the first time ever in the program's history that it won two postseason games in a single season.

Sure, the Panthers won two Class AA titles back in the 1970s, but back then the playoffs for Class AA were set up so just one game was played for the title -- not the full bracket and tournament high school football has now.

It would also be the first time Coconino has beaten Cactus since 2000.

Friday's kickoff is set for 7 p.m. at Cactus High School and will be aired on KAFF Country Legends 93.5 FM/AM 930 or online kafflegends.gcmaz.com.

Coconino’s Pierson Watson (25) and a couple of teammates wrap up the Estrella Foothills quarterback during the 4A Conference state tournament play-in game at Cromer Stadium.