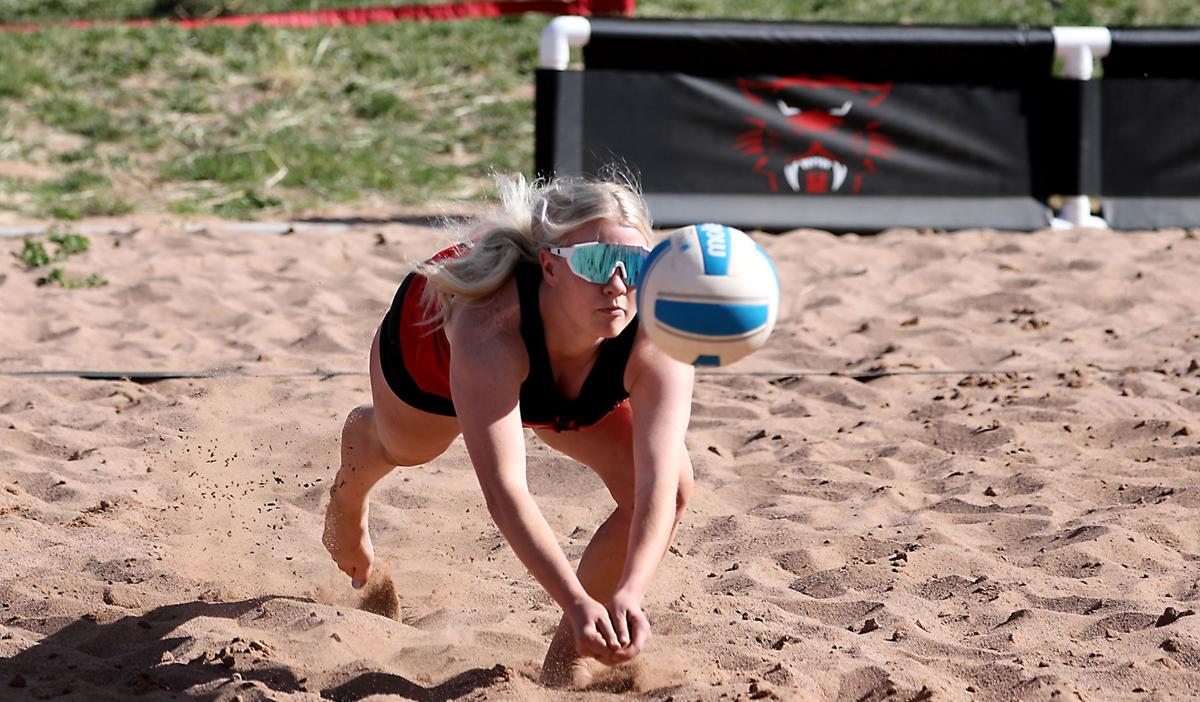 Coconino's Maggie Popham digs the ball during a match against Barry Goldwater on the Coconino beach volleyball courts in April. The Panthers won their opening matchup of the state tournament on Monday.

Coconino beach volleyball defeated Canyon Del Oro 5-0 on Monday in the first round of the Division II playoffs at Coconino High School.

A 5-0 sweep by the No. 3 Panthers (13-0) over the No. 14 Dorado (6-6) was more impressive to co-coach Scott Dendy than simply a favorite winning easily at home. Canyon Del Oro had only been swept once in 2021, by undefeated No. 1 Salpointe Catholic.

“To get a playoff sweep against a team with some really good players is amazing, that can’t get overstated,” Dendy said.

Coconino’s No. 5 duo, junior Hannah Cody and senior Morgan Derr, scored the first point for the Panthers. The pair won the first set, 21-14, fell 21-18 in the second and dominated in the tiebreaking set, 15-8.

“The other team started playing a lot better in the second, but Hannah and Morgan didn’t get down on themselves and they played really well and won the third,” Dendy said. “And in a playoff match, getting that first win gives you so much momentum.”

Pair No. 4, juniors Avery Rhoton and Reese DoBosh followed up with a 21-12, 21-12 straight-sets victory, winning the second point in the most lopsided score of the team match.

Dendy was proud of the duo’s effort on Monday, as he said they had struggled of late. The pair constituted the lone loss to Flagstaff.

“We really worked with them these past few days. The pair they played against had one really good player, too. They were great today,” Dendy said.

Senior duo Maggy Popham and Megan Hicks, the Panthers’ No. 2 duo, won the third point and clinched the overall match in a 21-13, 21-14 sweep. Coconino's No. 3 and No. 1 pairs tacked on victories as well.

Coconino will host No. 6 Valley Christian in the Division II quarterfinals on Wednesday. The Trojans (12-1) defeated No. 11 ALA – Gilbert North, 4-1.

The Panthers will play in the quarterfinals for the third time in five seasons. Coconino reached the second round in 2017 and 2019 but have never advanced to the semifinals. With a talented roster and hosting the match, though, Dendy said the Panthers have a real shot at advancing.

“That’s why we put so much work into going undefeated and getting that top-four seed and home court,” Dendy said, “so that we could have the advantage in the second round.”

The Panthers host Valley Christian at Coconino High School on Wednesday at 4:30 p.m.

Flagstaff boys tennis is already in the midst of a successful season, having advanced to the quarterfinals of the Division II state tournament…

Coconino's Maggie Popham digs the ball during a match against Barry Goldwater on the Coconino beach volleyball courts in April. The Panthers won their opening matchup of the state tournament on Monday.