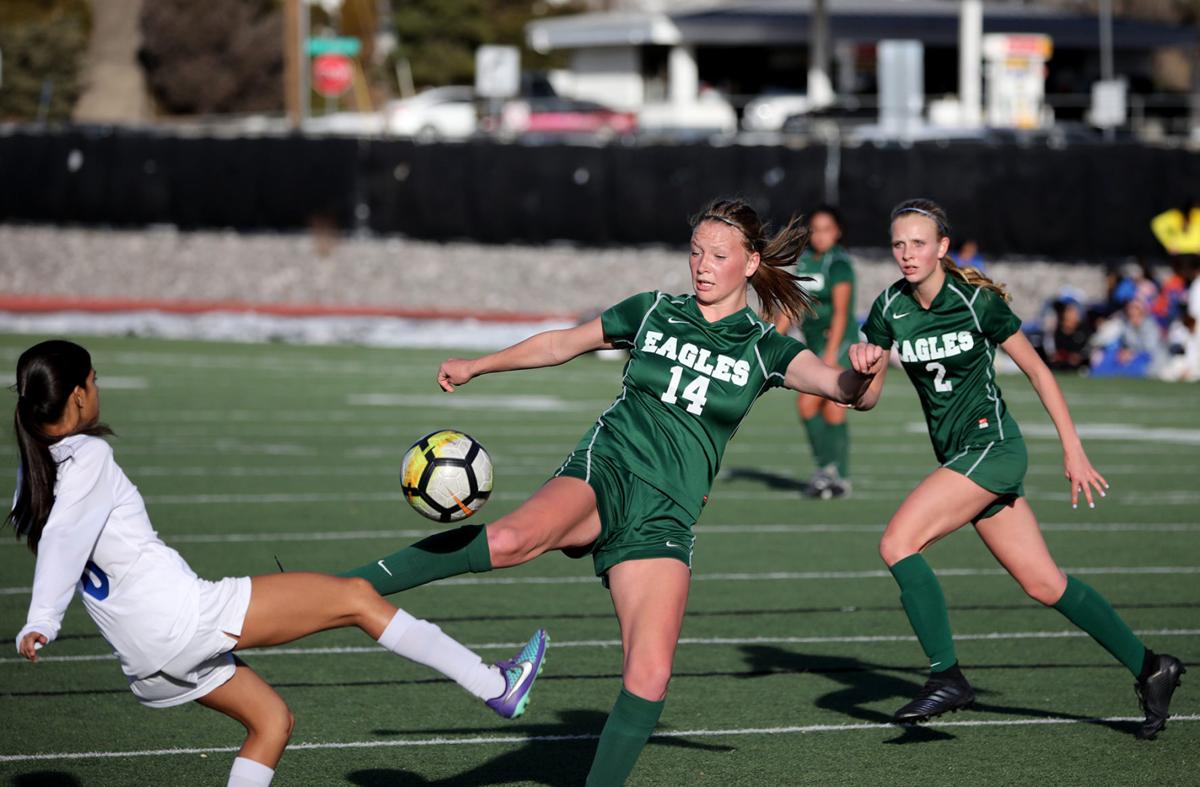 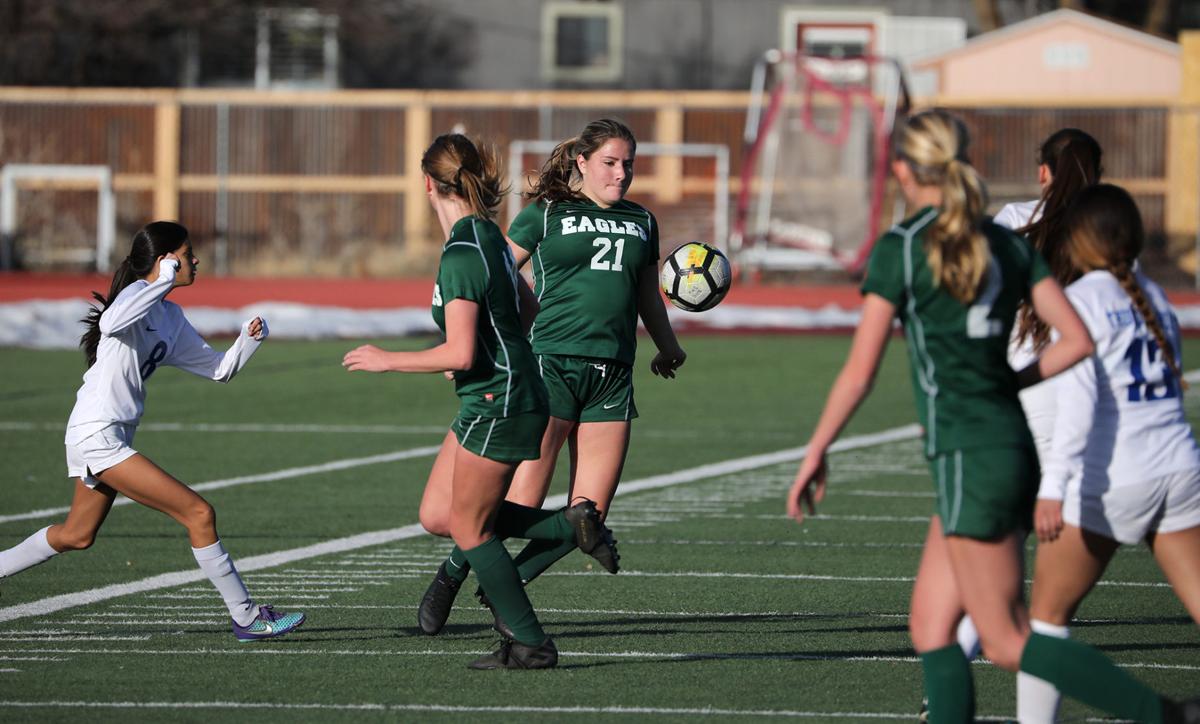 Flagstaff’s Zoe Lytle (21) controls the ball Tuesday during a match against Thunderbird at Flagstaff High School. 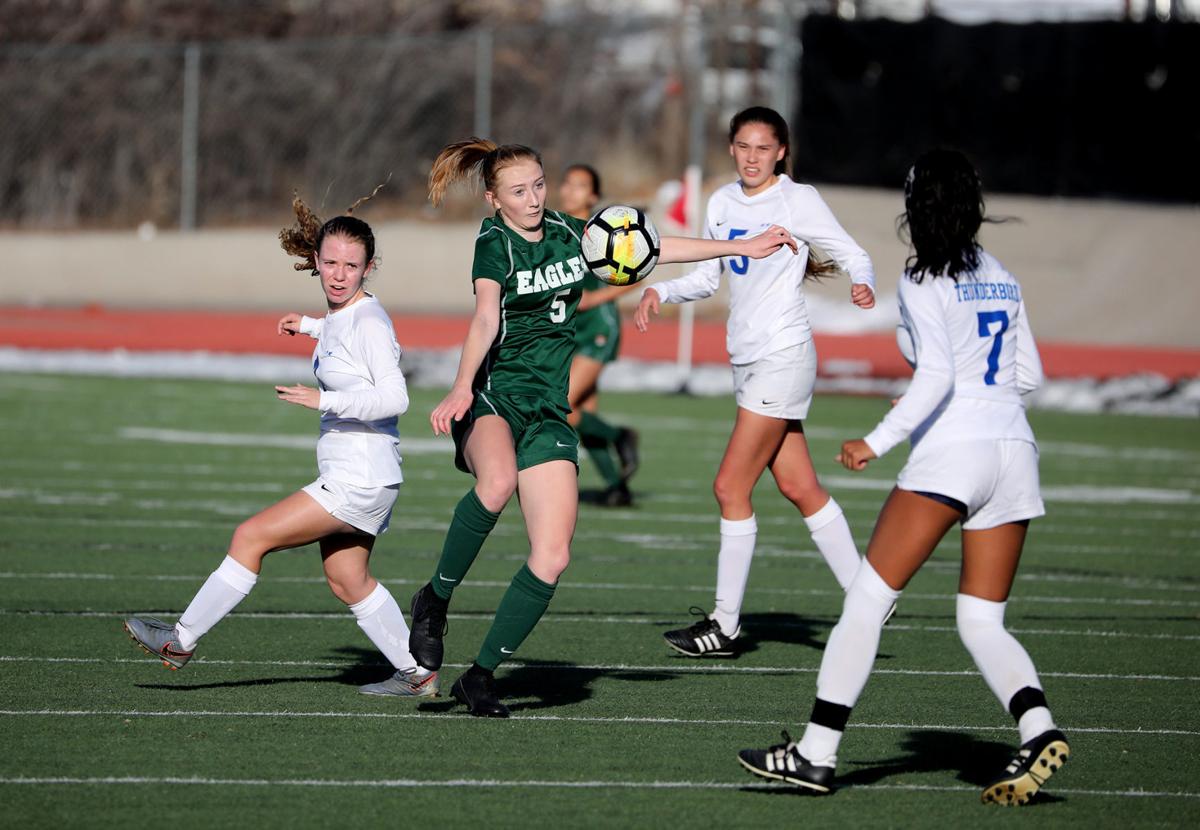 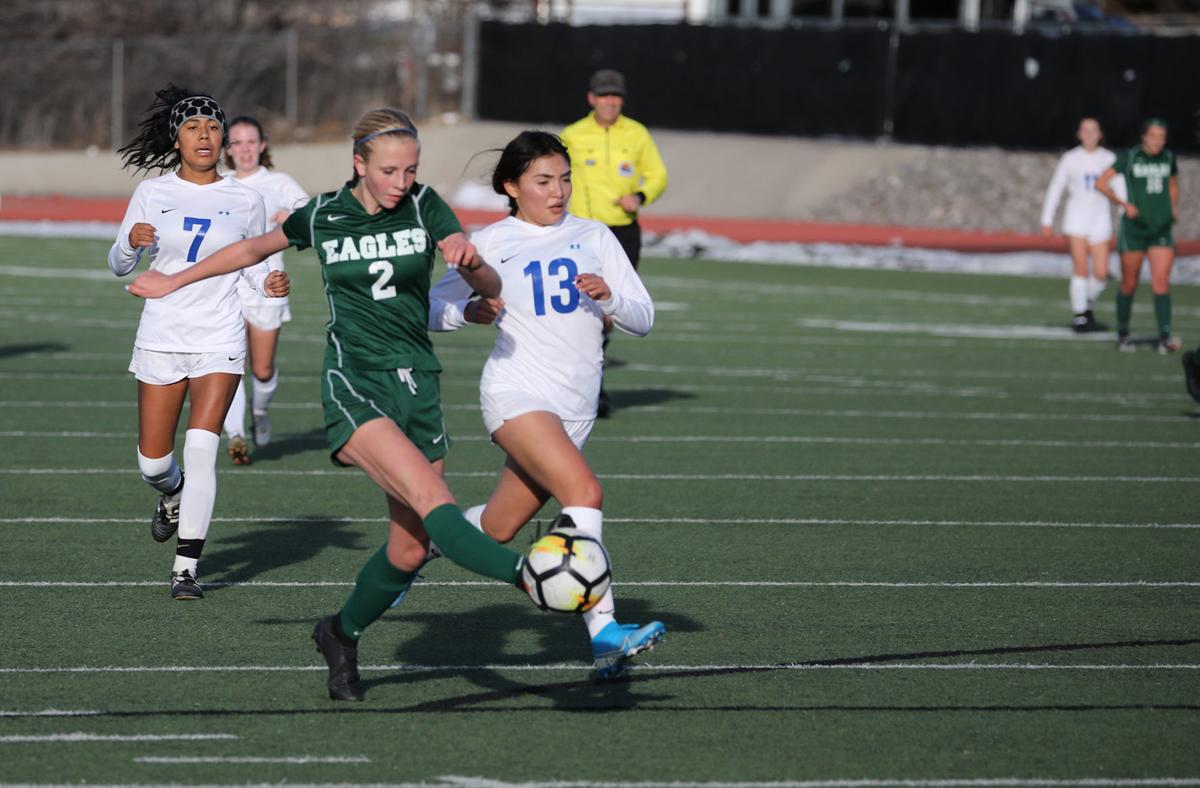 The Flagstaff Eagles girls soccer team showed its resilience Tuesday in a 3-2 win over Thunderbird at home.

The Eagles, now sporting a 2-0 record with the win, faced deficits of 1-0 and 2-1, but answered each Thunderbird (1-1) lead with goals of their own, showing head coach Holly Jones what the team is made of just two games into the new season.

"The biggest thing I'm proud of is they went down 1-0, came back, then down 2-1 and we just kept fighting," Jones said after the win. "That's what I really enjoy about coaching this group, that they are going to continue to never give up and believe in themselves."

Flagstaff won Tuesday without its leading scorer from a year ago, as Sam Slaughter missed the match due to injury -- making the win that much more impressive.

Thunderbird and Flagstaff, both 4A Conference teams, entered the second half knotted at 1-all, after each team scored around midway through the first.

The Chiefs found the back of the net first in the second half, much like they did in the opening 40 minutes. The goal came with about 21 minutes left in the second after Flagstaff's Zoe Lytle was tangled up with a Thunderbird player, giving the Chiefs a try on a free kick.

Thunderbird converted the ensuing free kick with a ball that bounced past the Eagles backline from about 20 yards out.

It took a bit for the Eagles to answer and tie it back up, but once that happened the momentum was all Flagstaff.

Lytle made up for the mistake on defense with a clean header off a well-placed corner kick from teammate Mayrin Soto with 14 minutes left on the clock.

Soto found the back of the net four minutes later after taking a through ball into traffic near the box to put the Eagles up for the first time of the afternoon.

From there the Flagstaff defense shut down Thunderbird, only allowing a few chances near the Eagles' box.

Thunderbird had one last opportunity with just under a minute left, but Flagstaff goalkeeper Lianna Albert stuffed a chance on a free kick to seal essentially the Eagles' win as the clocked ticked down to zeros.

Jones said she made a key adjustment that helped give the Eagles that go-ahead goal by Soto.

"We switched it up. We put Mayrin up top and that really helped us -- as she got that third goal," Jones said. " ... I like to play the tough games like this. I like to see our whole schedule as competitive, tough games."

Flagstaff was coming off a dominant 13-0 showing against Peoria a week ago, and Jones knew Tuesday was going to be a different beast. Thunderbird beat the Eagles a year ago, 8-5, in both teams' season opener.

The Chiefs went on to claim the top spot in the 4A after a 12-0 season, setting themselves up as an expected contender much like the Eagles -- who finished the 2018-19 season 10-1-1 and fourth in the 4A, losing in the state quarterfinals to eventual state runner-up Catalina Foothills.

Jones wanted her team to show what it can do and rectify some of the issues from last season's loss to Thunderbird, and she said the team did just that Tuesday with a disciplined and gutsy win at home.

She added that her Eagles had the Thunderbird game on their minds for a bit and wanted to really show what they are made of early in the season.

As for the rest of the year, Jones wants her team to take it day by day -- adding that for the team to replicate last season's success, they need to focus in on each game.

The Eagles return much of last season's roster, with the leading goal scorer in Slaughter back eventually from injury, along with its top goalie in Albert and a few other contributors.

Jones said she isn't worried about replacing the production and leadership lost from graduated seniors Lydia Pelletier-Butler, Taylor Hazlett and Zalma Batrez-Cardoza -- along with Brianna White, who is studying abroad for her senior year.

"I always tell them, all the schools lose senior talent. Of course I miss my seniors, but every school is in the same boat," Jones said.

BOSTON (AP) — Organizers canceled the Boston Marathon on Thursday for the first time in its history, bowing to the social distancing requireme…

Flagstaff’s Zoe Lytle (21) controls the ball Tuesday during a match against Thunderbird at Flagstaff High School.