Become a Member
Read Today's E-edition
Share This
Ask A Ranger: Murder at Mount Elden
0 comments
Share this
1 of 2 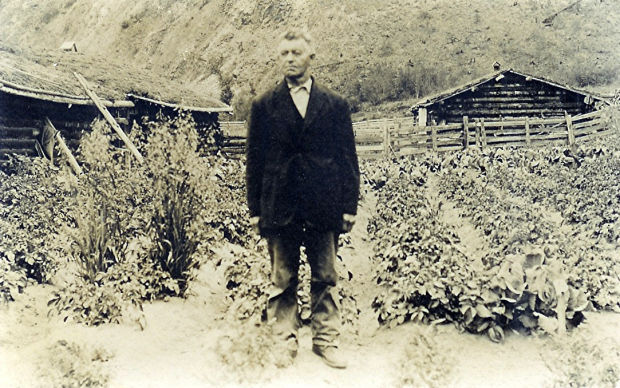 John Elden stands in his garden in Alaska where he moved after his son John Elden Jr. was shot and killed at Mount Elden. (Courtesy photos) 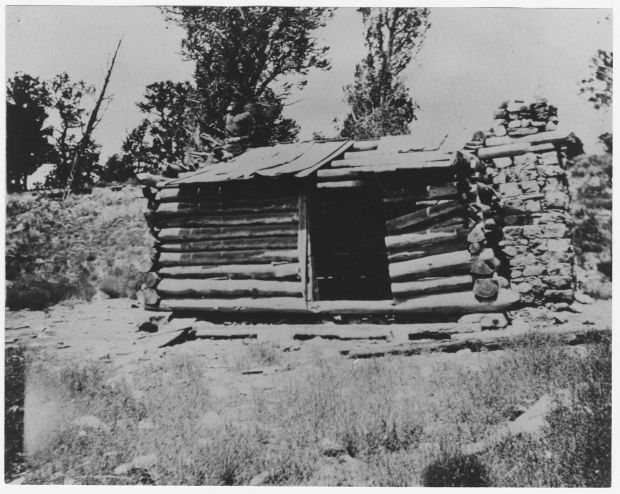 One of the structures from the Eldens’ property is shown. (Courtesy photo)

Dear Ranger: Recently we visited the John Elden Jr. gravesite in the Mount Elden Environmental Study Area. Can you tell us anything more about this tragedy?

Dear Buff: Yes. Additional information has recently come to light. By the way, the information displayed at the grave is generally correct, despite numerous inaccurate portrayals of the Elden mturder in papers and magazines over the years.

Some articles wrongly claim that an Elden daughter lies in the grave, or that the murder occurred at the hands of “a renegade Indian.” Such folklore and fanciful writing has blurred the lines between history and fiction, rending the true story difficult to trace.

John Elden was a Civil War veteran from Maine who migrated in 1872 to California. Some evidence places Elden passing by San Francisco Mountain during this trek. But once established in Kern County, Calif., Elden built and ran Granite Station, a stagecoach stop midway between Bakersfield and Glennville.

But soon Elden took his new bride to the San Francisco Peaks area by covered wagon, arriving in February 1877. There, in mid-winter, they lived in a tent while he built a single-room log cabin home.

The Eldens were among the earliest settlers in this area. They homesteaded five miles east of what would shortly become the railroad and lumber town of Flagstaff. Their cabin stood close by a small spring at the foot of what we today call Mount Elden. Susan bore six children between 1877 and 1885, most of them in the little cabin by Elden Spring. John Elden Jr. was the fourth of their children, born in 1881.

In the 1880s Flagstaff was not a quiet, sleepy Western mountain town. One could be held up three times in a single night walking from Sandy Donahue’s saloon to the brickyard a few hundred yards away. The old saying ‘Whiskey is for drinkin’ and water is for fightin’ was nowhere more applicable than to early Flagstaff, where saloons far outnumbered churches.

It was claimed that there was a saloon murder every week beginning August 1, 1882 — when the new railroad made Flagstaff “Terminus, Atlantic & Pacific” — until November 1883, 15 months later. Town people rejoiced when an entire week finally passed with no murder reported.

Still, with no mountain streams and few springs, Flagstaff had precious little water to drink, for man or beast. In 1886, Old Town was a village of two frame houses and eight or 10 log cabins sitting astride Old Town Spring, where most took their water. Tragic fights fueled stories of Flagstaff’s early thirst for water.

One day south of town at Griffiths Spring, two ranchers disagreed over water rights. One man lived, one died.

Nor was mob violence unheard of. In 1887, an angry mob broke into the city jail and killed the two Hawks brothers in their cell. A Flagstaff vigilante group used a great limb 12 feet above the ground near the entrance to the city park as their execution ground, where one morning nine men were found dangling, each by a rope around his neck. If justice was a little slow, local folks took action. The town just had to be cleaned up, so they said.

Given Flagstaff’s scarce water and frequent violence, the murder of an innocent bystander was bound to happen.

In 1887, John Elden was away from home when an itinerant mule herder named Bob Roberts stopped to water his mules at the Eldens’ spring. Susan Elden told Roberts that there was not enough water for their own livestock, let alone strangers’, and told the herder to move on.

But as Roberts departed, he fired a random shot back in anger toward the family. His bullet struck and killed John Elden Jr., age six. The youngster was buried on the homestead, where his grave remains today.

John Elden, neighbor Phillip Hull, and Hull’s hired hand Pete Brogdon tracked the murderer to the vicinity of the Houck Trading Post in eastern Arizona, where they dispensed rough justice. The three never revealed who killed Roberts; Elden merely explained that “He ain’t no more.”

Shortly after the double murder, John Elden packed up and moved his family to California. But now our knowledge of the John Elden story does not end at this point.

In Cloverdale, Calif., Elden became a dairyman. When the Klondike Gold Rush peaked in 1898, he departed for the Alaska gold fields, where he spent most of the next 24 years. He returned to San Francisco around 1922, and died there, in Letterman Hospital, on Jan. 18, 1929. Elden is buried in San Francisco’s Presidio Cemetery.

Those wishing to visit the Elden homestead and gravesite will find trail directions in Flagstaff Hikes by Richard and Sherry Mangum. Anyone with information or descendants from Flagstaff’s Phillip Hull or Peter Brogdon families may contact the author at John.Elden.Research@gmail.com.

John Westerlund is a local historian and coordinator emeritus of the NPS/USFS Interpretive Partnership. He would like to thank Beth Wilson, Peter Pilles, and Richard Mangum for their assistance with research and this article.

The NPS/USFS Interpretive Partnership is a unique agreement between the National Park Service and the USDA Forest Service to provide Interpretive Ranger walks and talks in the Flagstaff area throughout the summer.

This week’s calendar of Partnership events:

Evening Ranger Talk at Bonito Campground, 7:30-8:15pm. The Ways and Whys of the Universe, with NPS ranger Robert Wallace. Astronomy that has captivated our curiosities for ages. Campground Amphitheater.

Arizona Snowbowl Scenic Chairlift Ride, 10am-4pm Friday and Sunday; 10am-6pm Saturday. Full-priced lift tickets purchased after 3pm on Saturday include a complimentary BBQ at Agassiz Lodge restaurant. Rangers at the top of the chairlift will answer questions and conduct short presentations. For information: (928) 779-1951 or online at wwww.arizonasnowbowl.com

John Elden stands in his garden in Alaska where he moved after his son John Elden Jr. was shot and killed at Mount Elden. (Courtesy photos)

One of the structures from the Eldens’ property is shown. (Courtesy photo)