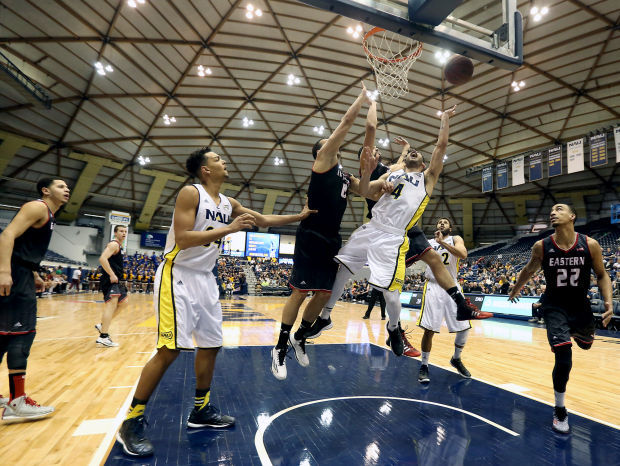 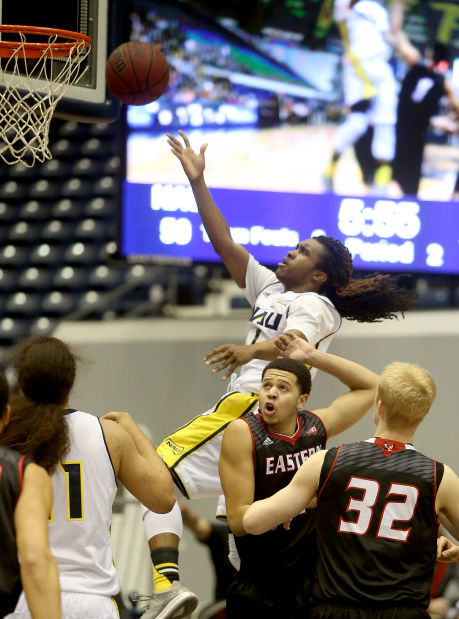 A minute after Venky Jois put in a layup to give the Eastern Washington Eagles a one-point lead, Kris Yanku sent him to the bench for the rest of the game.

Drawing Jois’ fifth and final foul with 2:21 left to play, Yanku hit both free throws to give the Northern Arizona Lumberjacks the lead. With another two free throws by Yanku and one from Ako Kaluna, the Lumberjacks (15-12, 10-4 Big Sky) iced their 73-69 victory Saturday over the conference-leading Eagles (20-7, 11-3).

Jois scored 11 points in the first half, but was limited to just four in the second and three rebounds all game as he was stuck in foul trouble. In his absence, Eastern Washington got a strong game from Bogdan Bliznyuk with 16 points and six rebounds.

“Venky is one of the top players in the league. You could put Venky and Tyler Harvey in a hat, pick one out and you have the player of the year in the league,” said Lumberjacks head coach Jack Murphy. “To get him out of the game was fantastic. Our guys did a great job of attacking him.”

The second set of free throws came after Yanku chased down a streaking Drew Brandon, who was driving to the basket to retake the lead with 36 seconds left. Trailing behind the fastbreak, Yanku stole the ball before being sent to the line again.

“I just wanted to chase him down,” Yanku said of the play. “I didn’t really see anyone on the wing, and the left wing was covered, so I thought I would make a play at the ball. He showed it and I took it.”

The sophomore finished with 19 points, hitting just 3 of 16 from the field, but 12 of 13 from the free-throw line.

“The refs were kind of letting us play a little bit, and coach just kept telling me to be aggressive,” Yanku said. “Keep driving and eventually they are going to start making those calls. I shot bad from the field because I was being really aggressive. Towards the end of the game, they started calling those fouls more often.”

Yanku also finished the game with six rebounds and eight assists, with six coming on 3-pointers. He kicked out to Ako Kaluna on three 3s during the game and was responsible for the beginning of Aaseem Dixon’s second-half dominance, with assists on back-to-back 3-pointers.

“Coach Murphy just gave me a little pep talk and a couple of my teammates also just motivated me, told me everything is going to fall,” Dixon said.

After scoring just five first-half points on 2-of-8 shooting, Dixon hit 3s on three straight possessions in the opening minutes of the second half. He finished with a team-high 23 points, hitting 7 of 8 in the second half, including a perfect 4 of 4 from outside.

“I told him ‘Aaseem, you are open, make the shot. You have got to knock it in.’,” Murphy said. “He looked at me and said, ‘Coach that is what I needed.’ I didn’t know that is what he needed. I wish he had told me that before the game, but whatever it was, it got him going.”

The teams traded the lead throughout the game, with Northern Arizona leading by as much as 50-40 before Eastern Washington chipped away to tie the score at 57 thanks to back-to-back 3s by Tyler Harvey and Parker Kelly.

Harvey, the nation’s second-leading scorer at 22.8 points, had his struggles continue since coming back from an injury. Chased by Quinton Upshur most of the game, Harvey reached his average with 22 points, but shot just 6 of 19 from the field and 3 of 13 from 3.

Entering the game ranked among the nation’s top-10 in scoring (seventh), 3-point percentage (fifth) and 3-pointers made per game (fifth), Eastern Washington was held well under its averages by Northern Arizona. The Eagles shot just 8 of 32 from 3, finishing well off their 80.7 points and 41.3 3-point percentage average and under their 9.9 3-pointers per game.

While Upshur finished with just four points, Kaluna followed Thursday’s career day with another 14 points on 3-of-4 shooting from outside.

The win drew Northern Arizona closer to first place in the Big Sky, with Saturday's game the only matchup between the Lumberjacks and Eagles this year. With just two weeks left on the conference schedule, Northern Arizona trails Eastern Washington by a game and Montana and Sacramento State by 1 and a half games.

Having won seven of its past eight games, Northern Arizona hits the road for the final time on the regular-season schedule, facing North Dakota on Thursday and Northern Colorado on Saturday. Both games tip off at 7 p.m.

Brandon Gfeller and Riley Bradshaw both knocked down 3-pointers to help give Montana a 10-point lead in the final minute of the first half, but Ryan Richardson hit a 3-pointer to cut the Weber State deficit to seven, 36-29 at the break.

Travon Langston gave the Thunderbirds the lead for good at 75-73 on a breakaway layup with 38 seconds left in overtime. Juwan Major added a free throw with 26.7 seconds that capped a 6-0 run for Southern Utah (8-17, 5-9 Big Sky).

Idaho (11-14, 6-8) pulled within two on Sekou Wiggs' free throw at 14.3 seconds. Kennedy's two free throws made it a two-possession game and Mike Scott added a meaningless 3 at the buzzer for Idaho.

Wiggs nailed a 3-pointer with 11 seconds left in the second half to send the game to overtime tied at 69. McGee was 5 of 8 from 3-point range and Cal Hanks added 16 points and three blocks.

When LeBron James scored his sixth point on Tuesday during the Los Angeles Lakers' game at Brooklyn, it meant he had reached 36,387 in his career.

NEW YORK (AP) — LeBron James welcomed Anthony Davis back with a lob pass for the game’s first basket, then turned to his own offense to score 33 points in the Los Angeles Lakers’ 106-96 victory over the Brooklyn Nets on Tuesday night.

Photos: Remembering Kobe Bryant on 2nd anniversary of his death

NBA All-Star Kobe Bryant, his daughter Gigi and seven others died in a helicopter crash on Jan. 26, 2020. Take a look back at his life and career.

When LeBron James scored his sixth point on Tuesday during the Los Angeles Lakers' game at Brooklyn, it meant he had reached 36,387 in his career.

James Harden or bust? Sources indicate the Sixers are all in even if it means prolonging Ben Simmons saga

James Harden or bust? That’s the feeling around the NBA as the 76ers search for ways to end the Ben Simmons saga.

PORTLAND, Ore. (AP) — Anthony Edwards had 40 points, including 14 points in the fourth quarter, and the Minnesota Timberwolves rallied to beat the Portland Trail Blazers 109-107 on Tuesday night.

PHOENIX (AP) — Chris Paul and his 36-year-old legs played 40 minutes of basketball for the Phoenix Suns on Monday night.

SALT LAKE CITY (AP) — When Chris Paul joined Devin Booker on the Phoenix Suns after a trade last season, it wasn’t always easy to decide who would be the finisher when games got tight.

Jokic, Nuggets set for matchup with the Pistons

24 years later, Jamaica's four-man bobsleigh team is back at the Winter Olympics

24 years later, Jamaica's four-man bobsleigh team is back at the Winter Olympics