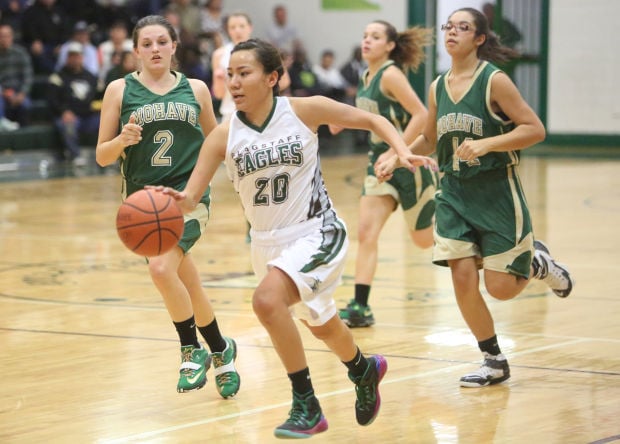 Flagstaff High School's Anika Francis (20) charges down the court ahead of the Mohave defense Thursday night. 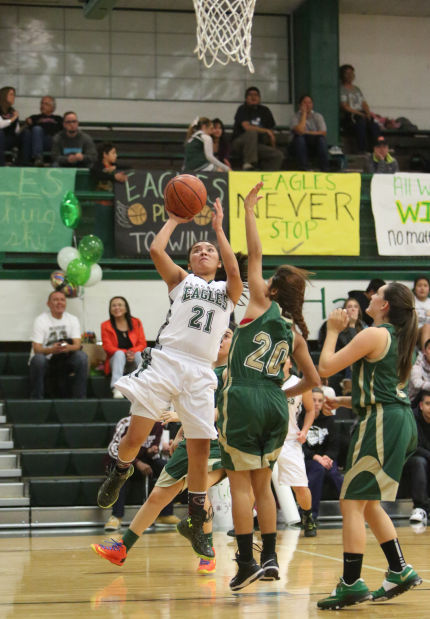 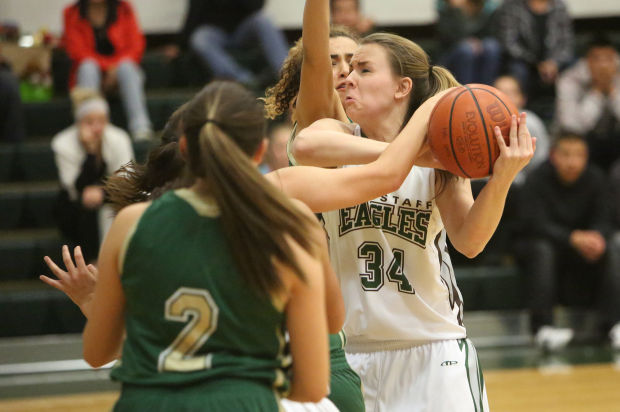 With a lineup that had seen little court action together, the Flagstaff Eagles girls basketball team got off to a slow start against the Mohave Thunderbirds before the fun began in Thursday’s 69-36 victory.

“We only practiced one day with the rotations,” Johnson said. “Those rotations, we haven’t had those per se at all. We have 17 for a reason. We wouldn’t just keep 17 if we didn’t feel that they could play at the level. When they are in there, the expectations don’t change.”

While the No. 3 Eagles (14-1, 4-0) struggled defensively early as the No. 40 Thunderbirds (8-9, 0-4) knocked down three 3-pointers in the opening quarter, the starting unit kept pace through the first eight minutes.

Trailing 19-15 to start the second, Flagstaff quickly erased the deficit and grabbed control of the game. Townsend, Gabby Short, Francis, Larson and Ben all contributed to a 10-0 run after the game was tied at 22.

With a 35-29 lead in hand at the break, Flagstaff came out after the half with five of its regulars who had not yet played. Monique Ware, Noni Thomas, Alyssa Goodwill, Mikala Begoody and Shay Toehe played the entire third quarter as Flagstaff put the game away.

“We have been wanting to take a look at that too, so it was nice chance to put them in and let them play,” Johnson said of the second-half group, which may act as the team’s starters next season. “We told them early on they wouldn’t play in the first half. That’s the good thing about this group. It’s not a group that craves a lot of attention or needs its own accolades; they are genuinely happy for each other and happy to see their teammates do well.”

Putting together a 16-0 run to close the quarter, the lineup completely shut down Mohave’s offense and allowed just three points in the third. Thomas scored seven and Toehe added five before they departed for the team’s seniors to return.

All but one player scored in the game, with Ben and Francis leading the team with 10 points each, followed by seven for Craig.

Mohave managed just 17 points after a 19-point first quarter, with all of Flagstaff’s rotations shutting down anything that was thrown at them.

The win marked 13 straight for Flagstaff, who sits near the top of Division II, as it has just three games remaining in the regular season. Saturday will bring a rematch of the Pepsi Holiday Tournament finals, as D-III No. 1 Valley Christian returns to Flagstaff after a 52-46 victory in December. Undefeated through 23 games, including tournament play, the Trojans have only had three games finish with a single-digit margin.

“Valley Christian is a pride game," Johnson said. "That was then, this is now -- let’s see what we can do. We will definitely look at that as if we can endure that test, then we will have a lot of confidence moving forward into section and hopefully state.”

Tipoff for the girls game will be at 1:30 p.m. on Saturday with the boys following after it is finished.

Flagstaff High School's Anika Francis (20) charges down the court ahead of the Mohave defense Thursday night.