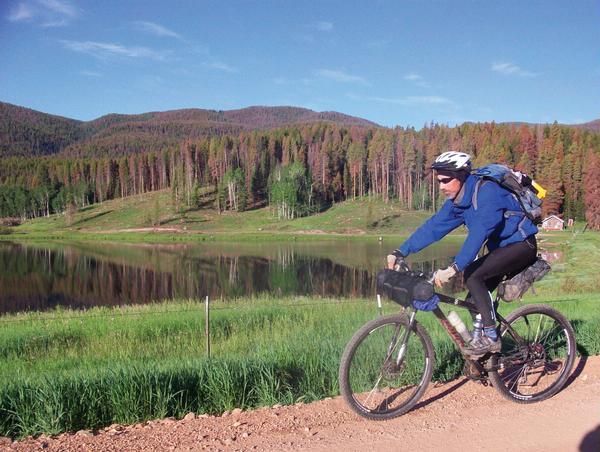 42-year-old Flagstaff resident Brad Mattingly logs a bit of the 2,745 rugged miles he endured on his mountain bicycle from mid-June to mid-July along the Continental Divide from Canada to Mexico. (Courtesy photo) 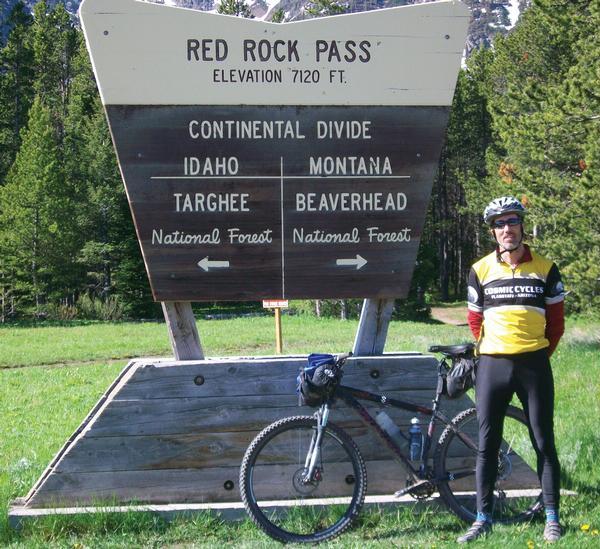 Brad Mattingly was leafing through a southwest periodical in a downtown bookstore when he noticed a blurb touting an extreme mountain bike race called the Tour Divide.

Already an accomplished rock-climber, the 42-year-old Flagstaff resident decided to tackle a new challenge and registered for an event billed as one of the toughest competitions in the world.

The Tour Divide route follows the Continental Divide, traversing 2,745 miles of backcountry dirt roads from Canada to the Mexican border. Competitors must be self-sufficient and supply their own food, water, gear and lodging.

"There were a few people who said I needed a mental health exam beforehand," Mattingly joked.

"I think there were a few people that thought I didn't have a chance in hell at completing this."

Mattingly, who runs the Coconino County DUI/Drug Court, talked his bosses into giving him roughly four weeks off to complete the task.

He arrived in Banff, Alberta, on June 12 and spent the next 32 days biking through five-inch-deep mud, dodging thunderstorms on mountain passes, eluding bear, napping in wet sleeping bags, and encouraging an epileptic competitor to achieve history.

Mattingly reached the Mexican border at Antelope Wells, N.M., on Monday, July 13 and returned to his courthouse office two days later a semblance of his former self. He had lost 15 pounds on the journey, his left knee ached and his right shoulder pulsed.

What hurt more than anything, though, was the unexpected alteration of his competitive status.

Mattingly figured the mental toughness cultivated by 25 years of dangling from sheer cliffs would prove beneficial in the undetermined journey that lay ahead.

Even though he'd only competed in one other mountain bike event prior to tackling the Tour Divide, Mattingly cited his weeklong expedition up the 3,000-foot face of El Capitan in Yosemite National Park as a testament to his dedication.

"When you're up on a wall 2,000 feet, you can't check out without a lot of time and energy; whereas, with a bike you can just step off," he said. "I think so many years of rock climbing was a good thing to prepare for the X-factor in this race."

And the X-factor, Mattingly quickly realized, was suffering.

He experienced four flat tires in his first three days and had to carry his gear-laden Specialized 29-inch mountain bike across two 25-foot-tall stacks of trees deposited by avalanches.

Mattingly said he didn't sleep a wink his second night on the trail and got lost twice the following day before crossing into the United States.

"I almost broke that third day," he said. "That day was really isolated, really wet and just a lot of miles. A lot of suffering. I went across the border at 11:30 at night. I was dead tired."

Unbeknownst to Mattingly, the most trying day was yet to come.

Mattingly met Deanna Adams, a 20-year-old Prescott High School graduate, at a cookout the night before the race. Sharing a common allegiance as Arizonians, they decided to form an occasional partnership and agreed to travel together through potentially dangerous Grizzly country.

Adams was riding a fixed-gear bike and, consequently, often lagged behind Mattingly when the pair ascended steep grades. She often encouraged Mattingly to ride ahead, and he would usually oblige. But, for some unknown reason, Mattingly decided to stay by Adams' side as Day 4 drew to a close north of Whitefish, Montana.

Distraught because she'd lost her biking glove, Adams plopped her sleeping bag in the middle of a forest service road and succumbed to sleep. The temperatures plummeted, temping the dripping skies to spit snow. Soaking wet, Mattingly struggled to catch a few winks in his 45-degree sleeping bag.

He awoke to a sound more chilling than the rain.

Mattingly strained his eyes through the darkness and witnessed Adams convulsing in her sleeping bag. It was a sight he'd never witnessed before: a grand mal seizure.

"I thought a bear had come into camp because she yelled," he recalled. "She was literally bouncing around. She was frothing at the mouth and she couldn't talk."

Mattingly wrapped Adams in a bear hug and eyed the 911 button on his spot satellite unit. He resisted the urge to signal for help, and Adams regained consciousness a few minutes later. Mattingly wrapped two sleeping bags around Adams' shivering body, then sheltered them both from the rain with a tarp.

"He was a total hero that night, he was just trying to avoid me getting hypothermia," recalls Adams, who was diagnosed with epilepsy when she was 10. "That was a pretty extreme night."

"But I'm glad he didn't push the button," she added.

They were back on their bikes the following morning.

Mattingly said the stretch through Montana was the most difficult part of the route because of its wretched weather and rugged mountain passes.

"My shoes and my body were constantly wet," he said. "Some of the storms were all day long. You're OK the first three or four hours, but then you get six, eight, ten hours into it and it starts seeping into you bones."

Wyoming offered flatter terrain and gooey mud. The daunting mountain climbs returned in Colorado. Despite all the hazards, Mattingly said he managed to ride between 80 and 125 miles every day.

There were several times he felt broken. But a relentless inner drive kept him going.

"I had a real strong sense of desire to complete this for our community, for Flagstaff," he said. "At some point in time, it just clicked. There were so many miles that we'd gone through and so much difficulty, I was like, 'I'm not going to stop unless they have to haul my carcass off the route.'"

So he pushed on toward the finish — and delirium.

"There were some days on the ride where we rode so hard that I just felt like a vegetable at the end of the day," he said. "I remember one day being in a Wal-Mart and having to buy some supplies. I needed an assistant to help me buy stuff. I just wasn't thinking clearly."

The random bouts of confusion were a product of mental and physical fatigue. Mattingly said sleep was elusive during the month-long adventure. So was a balanced diet. Because the Tour Divide is a self-supporting event, Mattingly was forced to subside on whatever he could scrounge up along the way. Meals usually consisted of a random mix of cheese, jerky, nuts and nutrition bars.

"The diet was pretty gross," he confessed. "We got most of our food supplies from gas stations, but maybe twice a week we'd hit a grocery store and you'd load it up.

"If you had an opportunity to sit and eat, you'd gorge yourself."

The finish line in Antelope Wells must've looked like a mirage fluttering in the 105-degree desert heat. Mattingly and Adams crossed together, 31 days, 7 hours and 30 minutes after leaving Banff. Half the field of 42 riders never completed the race.

"When we came across the finish line I was completely psyched. I felt like a champion, a hero," Mattingly said.

Mattingly's emotions shifted from elation to dejection three days later when he received word that his accomplishment had been "relegated." Race organizers traced an electronic tracking device and concluded that Mattingly and Adams were off-track for 40 miles in Montana.

"They recognized it as a successful completion but done in an inferior manner to the other racers," Mattingly said. "I was frustrated with their decision, but it's out of my control. I felt like we completed the course in an honorable manner."

He has no aspirations of vindicating himself with a follow-up performance next year.

"For me, this was a once-in-a-lifetime shot," he said. "I'm sure I'll still bike, but what really looked appealing when I finished was casual rides with my daughter (Sierra)."

Rory Faust can be reached at 556-2257 or rfaust@azdailysun.com

Civale expected to start for the Indians against Yankees

42-year-old Flagstaff resident Brad Mattingly logs a bit of the 2,745 rugged miles he endured on his mountain bicycle from mid-June to mid-July along the Continental Divide from Canada to Mexico. (Courtesy photo)