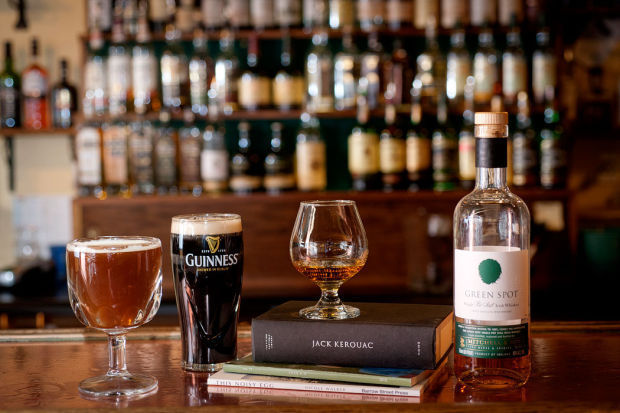 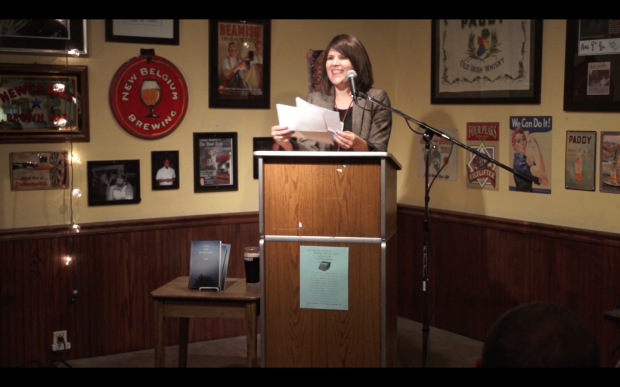 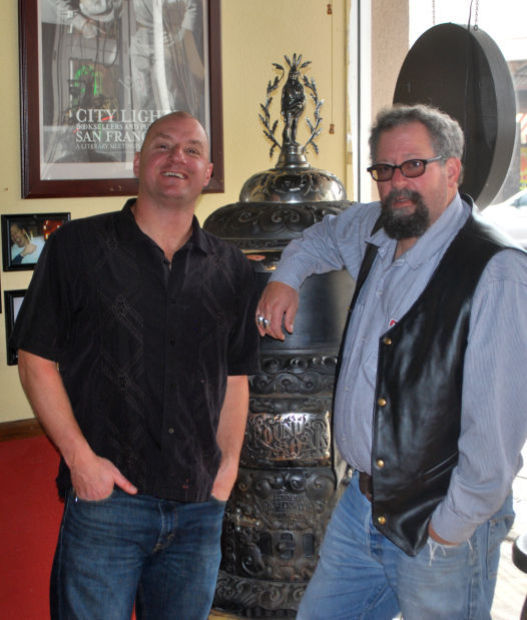 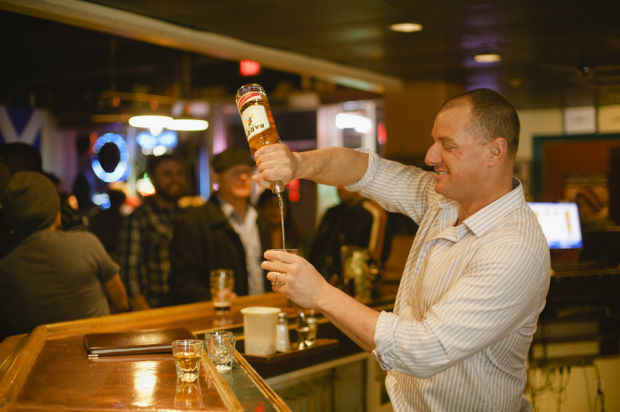 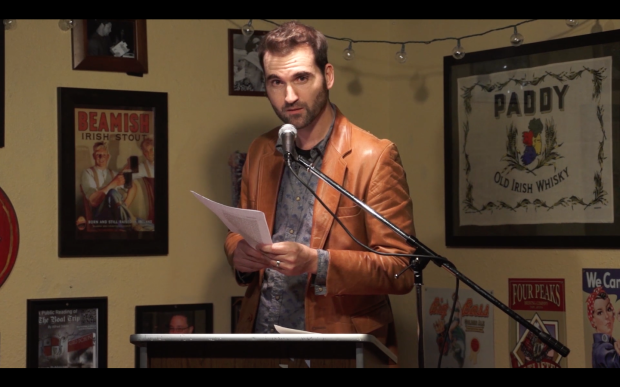 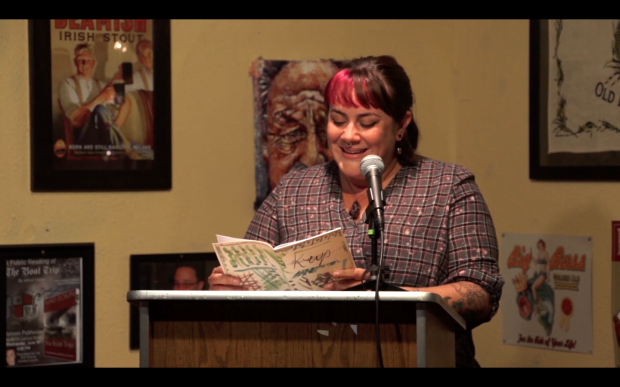 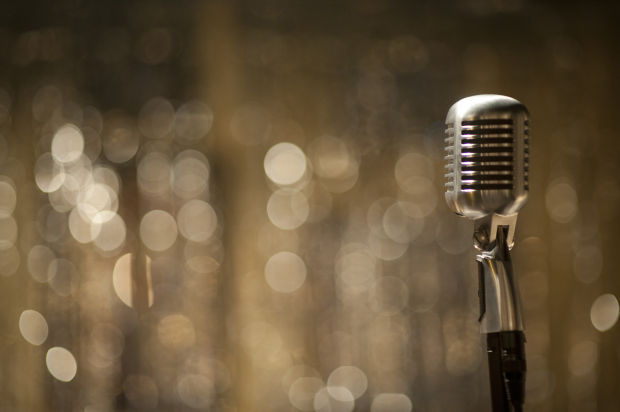 On a Monday night in Flagstaff, not much is going on in town. Unless you count the Viola-nominated Narrow Chimney Reading Series at Uptown Pubhouse, that is. One of its creators, Jesse Sensibar, introduced it this fall as, “the most fun you can have in Flagstaff on a Monday night. With your clothes on, anyway.” Jokes aside, there is a reason this series draws upwards of 50 people and writers like Shonto Begay, Robin Hemley and David Carlin to the downtown location every Monday evening.

I recently spoke with the two literature (and whiskey) aficionados who started Narrow Chimney, to get a behind-the-scenes look at Flag’s most successful literary reading series. James Jay, the owner of Uptown Pubhouse and regular Flag Live contributor, and Jesse Sensibar, a recent graduate of NorthernArizonaUniversity’s Master of Fine Arts in Creative Writing program, have known each other for about 20 years. In fact, it was Jay who published Sensibar’s first story two decades ago. Both men laugh when they talk about the past and where literature has taken them both since.

In the late ’90s, James moved out of the area to attend the University of Montana’s MFA program in Missoula. There he participated in a reading series with a structure that, 20 years later, Narrow Chimney would be modeled after. Once a week, an MFA student and a local published author would each read their original works in a local bar, usually to a packed house.

“There’d be some clack of pool balls and a little bit of bar background noise, but it mostly worked as a solid venue, a place to put literature into the ears of the people around town,” Jay says about the series. “As a student I also found it tremendously motivating to read with Rick Bass, Kevin Canty, Chris Offutt, and to see my colleagues do the same.”

When he came back to Flagstaff and purchased Uptown Pubhouse, his path one again crossed with Sensibar’s, and the two decided to see how a similar reading series might work in a small mountain town, like Missoula in its appreciation and support for the arts.

So last year, Sensibar approached the new batch of MFA students (of which I was one) with the layout of the series. He was met with immediate support, each of us as interested in reading our work in a laid-back atmosphere like Uptown in front of friends and colleagues—the best first audience any of us could ask for. The system would be the same: one MFA student and one established author, with the idea that a mentoring environment would be built.

Each of the professors, editors and other successful authors that would pair with a student had once been in their shoes and therefore could help the students along in their early writing careers. We all signed up for dates to read and then the panic set in as we saw the writers we were paired with. Seth Muller, the editor of Northern Arizona’s Mountain Living Magazine, staged one of his plays with local actors. Begay read to us on Indigenous Peoples Day of his Diné heritage and pride for his people. Carlin and Hemley each flew half way around the world to read their essays to a bar with standing room only. Our esteemed writing professors were sometimes our partners on stage. We, the students, were in awe. This was our future laid out before us, if we only wanted it bad enough.

I asked Sensibar what had changed from that first year as the middle of the second season of Narrow Chimney nears, with an even larger audience and bigger names gracing the modest Uptown stage. He told me the main difference was the local support. Being nominated for a Viola Award for Story Telling in its first year brought the series out of the bar and into the public eye. Now, he points out from his bar stool, Narrow Chimney draws more than 50 people a night. Not bad for a reading series still in its infancy.

The other changes to the series are those natural to the growth of any program. Wanting to reach a larger audience and showcase the authors, Jay approached Robert Heinrich, a local videographer whose wife is one of Narrow Chimney’s MFA readers, and asked him to begin recording the series. This helped Jay and Sensibar apply for grant money to grow the program further and now all of the videos can be found each week on the Narrow Chimney YouTube channel. Heinrich told me that, “The Narrow Chimney Reading Series YouTube page was started the second week of September. In this short amount of time, it has counted over 400 hits on the 40-plus videos, from writers that live all over the world.”

Another friend to the program, Bob Larkin of Radio Sunnyside, was brought in to build the audio component and radio content for Sun Sounds, also making sure the sound at the reading each night is of professional standard. With Larkin and Heinrich’s support, the program is able to reach its potential in both outreach and quality—far more impressive than the first year in 2013.

Funded by Uptown while they waited for the grant approval, Jay and Sensibar also began work on an anthology that would publish the works of the writers who participated that first year of Narrow Chimney. Jay explained that the reasons for creating this collection of essays, poems and short stories were twofold. One, it would allow the readers to share this moment in time. Whether they were in their 20th year of writing and publishing, or this would be their first printed piece, it would stand as a mark in each career the author would remember with pride. Second, as Sensibar added to the conversation, “James [and I] wanted to try and preserve the reading series on an annual basis and promote the people who read.”

“Altruistic,” I told him, “with a whole lot of work on your end.”

He smiled and replied, “Also, it wouldn’t hurt to sell a few copies of the book once it was printed.”

I smiled in return. “I hope you run out of books and have to print another run,” I told him.

We both agreed that would be the best possible outcome for the writers whose work graces the pages of the anthology, which is in the final stages of editing as this goes to print. Who knows, we all wondered, some of these authors might go on to pretty big things. Imagine how great it would be to come back to the stage at Uptown and recall that this is where it all began for them.

Now that this series is on an upswing, with no foreseeable change (except further success) in the future, I asked Jay and Sensibar each what they wanted to see happen to the program as it continues.

Sensibar says he hopes “it picks up enough steam, longevity and reach that any writer passing through or visiting would want to make a stop at the Narrow Chimney night as part of their itinerary.”

When I asked who he’d like to see if he could get any writer here, he told me he hoped that somehow, Jim Harrison (a painting of whom hangs above the Uptown stage, just behind the mic) would get wind of this and “drag his tired ole a** up from Patagonia.” We laughed and both turned to the back of the bar, imagining what such greatness might look like on our humble stage.

Jay told me, “The results have been spectacular. For four years I worked as the Executive Director of the Northern Arizona Book Festival. We’d have good numbers for our annual event; however, the first year our overall attendance numbers were higher than those at the book fest. In our second year, we’re looking forward to sticking to the same reading structure and increasing our overall attendance. The support has really been encouraging and wonderful.”

Jay, Sensibar and myself all sit, backs against the bar, facing the stage. We toast their hard work, the creation of something that will outlive us all, and talk about the reading next Monday.

It’s this very reason you’ll find me in the corner of the bar, with a smile on my face, listening intently every Monday night.

As the scheduling gods would have it, the Narrow Chimney Reading Series is taking a break Mon, Nov. 10 for Veteran’s Day, but will continue the following week, Nov. 17, with Grace Liew and local author Mary Sojourner, while a Thin Air Magazine fundraiser and party will wrap up the fall season on Dec. 1. The spring series will kick off after the New Year. The weekly Monday event starts at 7 p.m. at Uptown Pubhouse, 114 N. Leroux, in downtown Flagstaff. For more info, visit their Facebook page or call 773-0551.