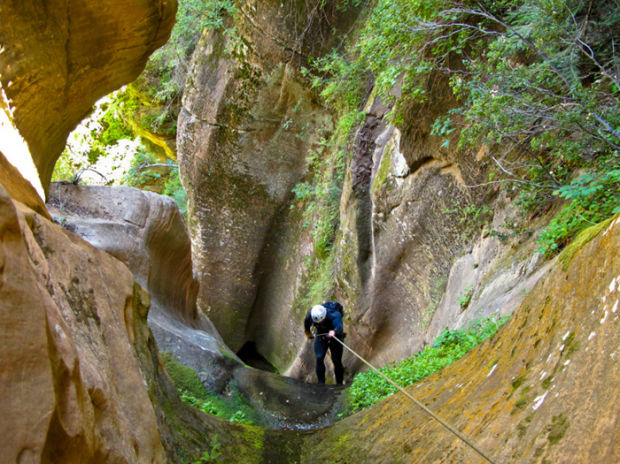 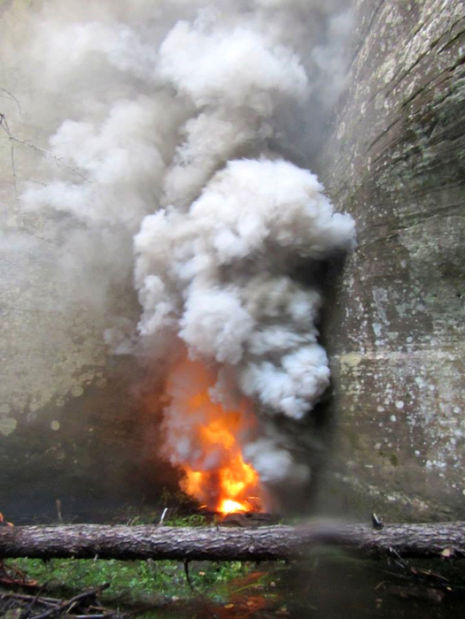 Sedona-based Ropes That Rescue lit this bonfire during a training exercise in Illusions Canyon to create smoke that could be used to shine lasers through. This image was obtained through a Freedom of Information Act request.

Even in the long days of summer, the heart of Illusions Canyon is dark, cold and wet.

The deep and narrow slot canyon feeds into the West Fork of Oak Creek Canyon. Its beautiful red rock colors are painted with lush hues of green from moss and ferns.

And in a federally designated wilderness area brimming with tourism and all manner of recreation, Illusions Canyon is made more incredible because it was only recently discovered. It’s known to canyoneers as “the best canyon in Arizona” — a bold title to give any tributary in the Grand Canyon State.

So when photos started circling this fall of fires intentionally lit in Illusions Canyon, anger erupted with the private company that set the bonfires in a rescue training exercise.

Now the owner of Sedona-based Ropes That Rescue, Reed Thorne, is facing federal charges for operating without a permit and starting the fires, according to his attorney. Ropes That Rescue says they were testing an idea for extracting injured canyoneers — using smoke to triangulate positions in the pristine slot canyon with lasers. But canyoneers and rescue professionals, including one agency that paid for the course, say the technique is not viable.

“We didn’t know about the smoke (in advance),” said Coconino County Search and Rescue Coordinator Aaron Dick. “Never say never, but my impression of the technique is that it’s something we wouldn’t use.”

Ropes That Rescue was also charging around $1,000 per person for the three-day slot canyon rescue course, including fees paid by Coconino County Search and Rescue’s nonprofit arm. Also on hand for the smoke and lasers exercise were members of the Sedona Fire Department Technical Rescue Team, a backcountry ranger from the National Park Service and other Arizona rescue crew members.

But Ropes That Rescue was operating illegally at the time, having no permit or permission for the training.

“This activity was not authorized by a special use permit and the Coconino National Forest was not notified it was being planned,” Red Rock District Recreation Special Use manager Jeff Gilmore wrote in documents obtained in a Freedom of Information Act request by the Arizona Daily Sun.

In a letter provided by his defense attorney, Thorne claims that he never knew he needed a permit in his 20 years of operating on the National Forest.

But that claim is rejected by numerous veteran Forest Service officials, who say they’ve told Thorne he needs a permit. And in Forest Service correspondence obtained by the Daily Sun, Thorne himself acknowledges that “you need a permit” to operate on the forest.

Todd Martin was one of five people who made the first descent through Illusions Canyon. His friend, Joe DeSalme, had discovered Illusions in 2005 along with another nearby canyon, called Insomnia. He said activities such as this are precisely why they tried to keep the canyon secret as long as they could.

“This is a unique place,” Martin said. “Many people consider it to be the best canyon in Arizona, so any activity that damages the resource is not acceptable.”

Martin and DeSalme had also been the first through Insomnia Canyon, technically a tributary of Illusions and an incredibly tough descent. At one point, there’s a dizzying and dangerous 320-foot rappel. It took them many tries to make it all the way through, so when the duo started descending into Illusions Canyon, they were concerned they’d find a similar large drop. Instead, what they found was a lush oasis with an incredible arch that had likely never before been seen by humans.

“It was really a treat to be the first group ever to see that canyon,” Martin said. “When you do a lot of exploring, you find a lot of duds. So it’s a lot of effort that often times doesn’t pay off.”

They also found Arizona bugbane, a rare broad-leafed green plant that resembles a fern and only grows in four small populations in the world — each in northern Arizona. Martin said that as more and more people found out about the canyon, the damage to its sensitive environment quickly increased.

“It was hard to see this place that we considered so special become widely known,” he said.

The fire was especially frustrating.

“We did find ashes in the canyon and then one section where the wall was charred with black soot. We tried to rub dirt on it to get (it) off, to no avail,” he said. “You’ll find evidence of Indian fires 600 years after the fact. I don’t know if it’ll rinse off over time.”

And DeSalme says that the rare plant was growing in the exact area where Ropes That Rescue lit their fire.

Asked about the Arizona bugbane plant on Thursday, Thorne told the Daily Sun he’d never heard of it. In a letter sent by his defense attorney on Friday, he said that there were “allegations” that a rare plant grew in the canyon, then added, “the plant does not grow in the area of the training.” He also rejected allegations that they had a bonfire, saying instead that they lit cottonballs on fire and then piled a few leaves onto them to create smoke. But photos of the fire and smoke show a much larger blaze.

Documents obtained by the Daily Sun also show how public complaints about the Illusions Canyon fire sparked a U.S. Forest Service criminal investigation. The fire led the Forest Service to the realization that Thorne had been operating without a permit in the Red Rock Secret Mountain Wilderness Area since the 1990s. Officials declined to comment for this story, citing the ongoing investigation.

Thorne had started his career as a volunteer with the Sedona Fire Department, and in 1985 he was asked to lead the area’s first technical rescue team. The Forest Service worked regularly with Thorne back then, as Sedona fire responded to rescue calls. And the agency allowed him to train on Forest Service property for those purposes.

However, that was before he left the agency to run a private business. And Forest Service officials at the time told him that such operations were not allowable in wilderness areas, according to internal correspondence.

Recreation staff officer Bill Stafford, who worked on the district from 1979 to 2008, told Gilmore he had personally informed Thorne that “conducting these training exercises within designated Wilderness Areas was not allowable and violated the prohibition on using mechanized transport.”

Thorne also apparently asked about gaining a special use permit in the mid-1990s, but he was denied because the district was under a moratorium on new outfitter-guide permits, as it still is today.

And Gilmore, who’s worked in the Red Rock District since 2008, says that Ropes That Rescue never contacted him about a permit.

And yet, Thorne says that his operating without a permit was the result of a misunderstanding.

He says that no one ever talked to him about the fact that he didn’t have a permit. Forest Service law enforcement officials say that they have no record of ever having an interaction with Thorne or Ropes That Rescue over the activities. Rigging For Rescue, a Colorado-based business also seen as one of the top training outfits in the country, boasts its special use permits prominently on its website for area National Forests and Parks. And Ropes That Rescue has made no attempt to hide its activities from the Forest Service. It openly posts photos of its trainings, as well as an advanced schedule of where and when the courses will be held. Ropes That Rescue also sponsors the Highway 89A clean-up program near the Encinoso Picnic Area, a site where they regularly host classes.

“Mr. Thorne is willing to get a permit and to comply with all requirements of the U.S. Forest Service,” his lawyer wrote in a statement to the U.S. Attorney’s Office on Friday. “He explains his failure to do so as a simple misunderstanding, for which he apologizes.”

And it’s not just canyoneers who have been upset with Thorne and Ropes That Rescue.

Rock climbers have also been angry over the abundant use of bolts, which is widely frowned upon in that community.

“The biggest concern from the climbing community is that the Forest Service is going to see Reed (Thorne)’s work in a high profile environment and think it’s climbers,” said Chris Tatum, head rock climbing guide with the Flagstaff Climbing Center. “The Forest Service doesn’t seem to care either on the issue that he’s operating commercially on the National Forest without a permit and we’ve all known this forever.”

At Encinoso in Oak Creek Canyon, also in a wilderness area, Ropes That Rescue regularly conducts rope access training courses, according to its website and Facebook page. The courses are high-priced and designed for industrial workers, who operate on utility lines, oil rigs and dams — not just rescue personnel.

The company also travels the country and the world offering training for industrial workers. Training at Encinoso has led to dozens of metal bolts being permanently attached to the rocks in a high-traffic area. However, Thorne denies that his company was first to place the bolts. Instead he blamed the gear on Coconino County Search and Rescue.

“We only place gear in a rescue,” Dick said, denying his agency would ever place bolts at Encinoso. Tatum says that climbers went through the area and painted the bolts to camoflauge them, but on a recent visit, fresh hardware could be seen in the rocks.

Rock climbers also say that they’ve repeatedly been denied special use outfitter permits similar to the one Thorne has been operating without.

Tatum started applying to the Forest Service about eight years ago and was repeatedly told that there was no plan in place for the guiding permits, but that it would be available in the near future. After four years of requests, the rock climbing company gave up and decided they would have to keep their guiding efforts in the regions of the forest where commercially guided climbing is allowed.

“We’d give anything to be guiding and teaching on the Red Rock Ranger District, but we’re not because we’re trying to go about it the right way,” Tatum said.

-- Based in Sedona, but teaches courses across the country and internationally

-- Family business owned by Reed and Jayne Thorne, operated with their children

-- Seen as a pioneer in rescue training

-- Courses cost between $1,000 and $2,000 per person, with discounts given to volunteers and local agencies

Canyoneering is more than just one sport.

Sedona-based Ropes That Rescue lit this bonfire during a training exercise in Illusions Canyon to create smoke that could be used to shine lasers through. This image was obtained through a Freedom of Information Act request.