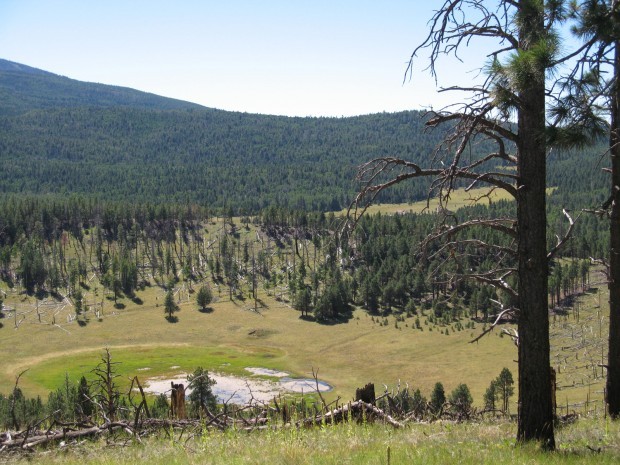 The small pond in the Walker Lake caldera is a favorite of deer and elk at dawn and dusk during summer and fall. Photos by Randy Wilson 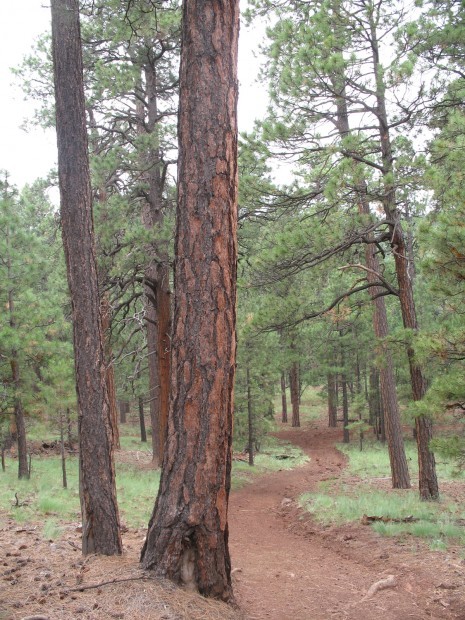 Most hikers in the Flagstaff region have visited some feature of an ancient volcanic eruption -- even when they don't know it.

-- Hike the new section of the FUTS behind the Museum of Arizona and you'll see the northeastern edge of the lava flow from A-1 Mountain.

-- Scramble to the base of Grand Falls and you are witnessing the hydraulic effects of a lava dam.

Over the years, some of my favorite hikes have been right into the calderas of local volcanoes to see what's at the bottom, then up to the rim to catch a view.

Some, such as Red Mountain, are full of spectacular rock formations and thus well-known.

This caldera sits just north of the Arboretum off Woody Mountain Road and was once the home of the Zanzucchi dairy farm. It was the subject of a fierce rezoning battle a decade ago that kept houses off the steep inner slopes. And now that the cows are gone, the caldera has returned to a vast meadow of tall grasses, with a marsh at the center.

The far northern end, where the rim has been breached, is home to the Flagstaff Ranch golf course and vacation home retreat. The development agreement worked out with the county, the Forest Service and State Lands was supposed to have allowed public access to the caldera via a footpath, but the gate attendants don't seem to know about it.

Instead, I hike (and, in winter, ski) into the caldera by scaling the southern rim. There's an old ranch road along its outer base that parallels Sinclair Wash. I park just off Woody Mountain Road, hike along the road for a mile, then follow the telephone pole trail up and over the rim. Because some of this is State Trust land, I purchase an annual pass that allows me legal access, although it is often difficult to tell when I am on state vs. federal land.

The southern edge of the caldera is ringed by a large grove of aspen that unfortunately have died out. Above that, the slopes are densely treed and full of elk and deer. The marsh is a stopover for migrating birds in fall and spring -- bring your binoculars and enjoy the show.

This is a small volcano close to Flagstaff that has been neither logged nor visited by wildfire. Because the caldera is shielded from high winds and collects plenty of moisture, the yellow-belly ponderosas in the caldera have grown to impressive heights. The entire bowl has the look and feel of a miniature old-growth forest -- a dense tree canopy above, but a park-like openness below.

Hikers and cyclists can reach the base of the mountain by taking the FUTS trail up to Observatory Mesa, then follow the old ranch roads about 3 miles due west. Those driving should head west on I-40 to the A-1 Mountain exit, then follow the directions in "Flagstaff Hikes" by Richard and Sherry Mangum.

The hike into the bowl is best done from the eastern edge, where there is an ATV trail that goes straight up the side of the slope. The scramble is steep but short -- 20 minutes at a moderate pace and you are in.

Once in the bowl, I enjoy just walking among the giant pines, with a picnic lunch on the grasses and fallen nurse logs below. Except for the ATV trail and one rude lean-to made of sticks, there was little sign of human intrusion this past summer.

To get up to the rim, follow the ATV trail until is peters out at the northwest edge of the bowl, then hike a deer trail up the slope and counterclockwise along the rim. The trees up here are smaller and bunched against the wind, but there are still fine views out to the west and south.

The name of this lake appears on some road maps as the roadside rest stop on the west side of Highway 180 at the Kendrick Park Watchable Wildlife Trail. But the crater is on the opposite side of the highway and two miles up Hart Prairie Road (FR 151). The trailhead is reached by an old forest road off FR 418 about a quarter-mile past the junction with FR 151.

This caldera is a perfect bowl that has not been breached, so it has a small lake that is full year-round in all but the driest summers. The Hochderffer Fire of 1996 swept up the western outer slopes and down into the bowl, but only in patches. The result is a mix of open grasses and dense forest, with plenty of deer and elk visiting the watering hole at dawn and dusk. In winter, the inner slopes make an ideal toboggan run. (I still search on each return visit for a pair of prescription goggles I lost there five winters ago.)

Because the fire burned the trees off the western rim, this section offers impressive views of Kendrick Peak to the west, the North Rim of the Grand Canyon to the north, and the Painted Desert to the northeast. I usually follow the rim clockwise and always forget until I am up there that this might just be the windiest place on the entire San Francisco Peaks!

Park off Woody Mountain Road at the sign for Sinclair Wash. Hike west along an old ranch road for about a mile until the overhead utility lines cross the road and head uphill. Follow the trail beneath the lines up to the rim and into the bowl. State Trust land pass required.

Hike or bicycle from Flagstaff on the FUTS trail up to Observatory Mesa, then follow old ranch roads to the eastern base of the mountain. If driving, take I-40 west to the A-1 Mountain exit, then follow the directions in "Flagstaff Hikes," by Richard and Sherry Mangum. Scramble up an ATV trail into the bowl; hike the rim counterclockwise following a deer trail. Best views are to the west and south.

Take the northern entrance to Hart Prairie Road (FR151) off Highway 180. Drive 2 miles to the junction with FR418. Go east for a quarter mile to an old ranch road on the left that leads to the trailhead at the base of the cone. Follow the rim clockwise, with best views to the west, north and northeast. Be prepared for strong winds.

For more information on volcanoes of the Flagstaff region, see Wendell Duffield's "Volcanoes of Northern Arizona," with stunning photographs by Michael Collier. Published by the Grand Canyon Association, 1997, with an updated edition in 2005.

The small pond in the Walker Lake caldera is a favorite of deer and elk at dawn and dusk during summer and fall. Photos by Randy Wilson

The sheltered caldera at A\u002d1 Mountain has never been logged or burned by wildfire creating a miniature old forest full of yellow-belly ponderosas. Photos by Randy Wilson
© Copyright 2021 Arizona Daily Sun, 1751 S. Thompson Flagstaff, AZ | Terms of Use | Privacy Policy
Powered by BLOX Content Management System from TownNews.com.
You don't have any notifications.