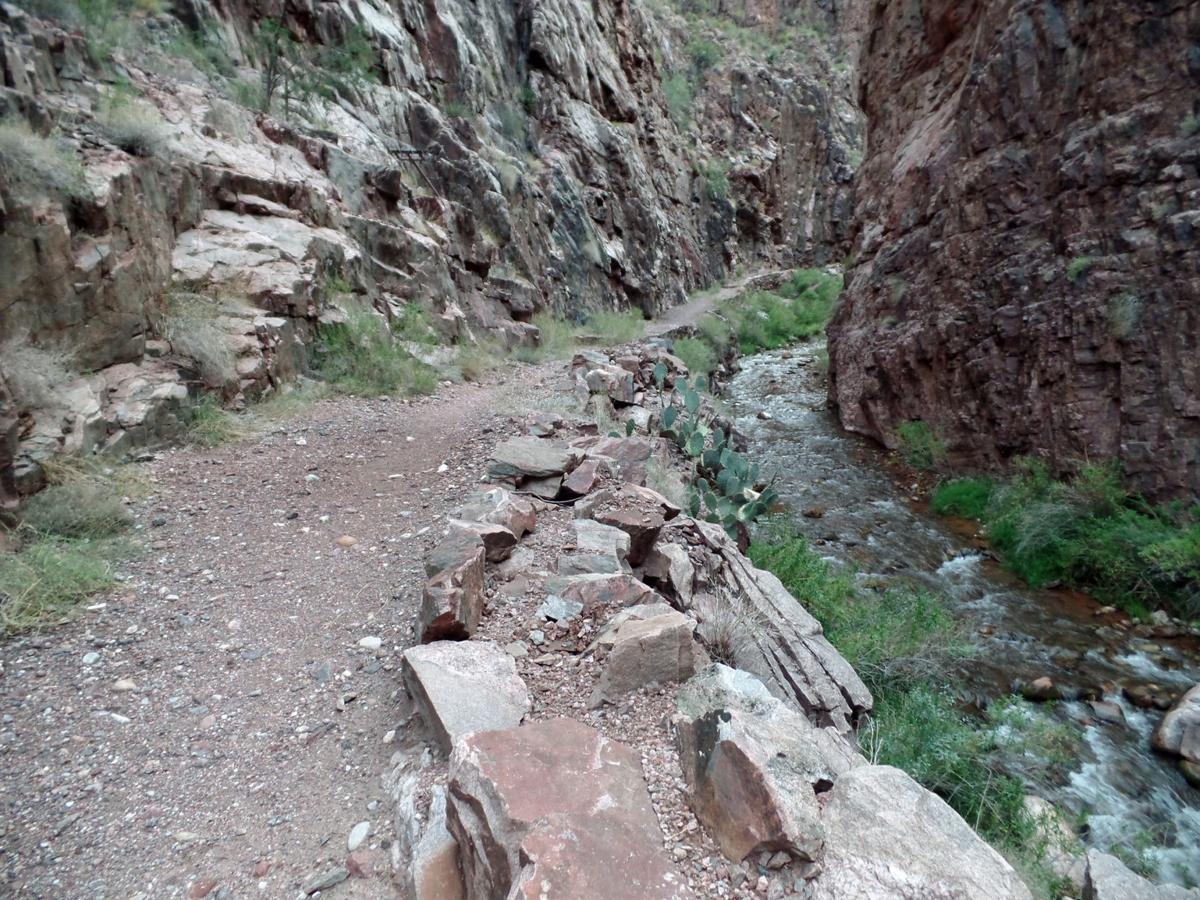 The North Kaibab Trail follows the twists and turns of Bright Angel Creek for many miles in a narrow section of the canyon called “The Box.” 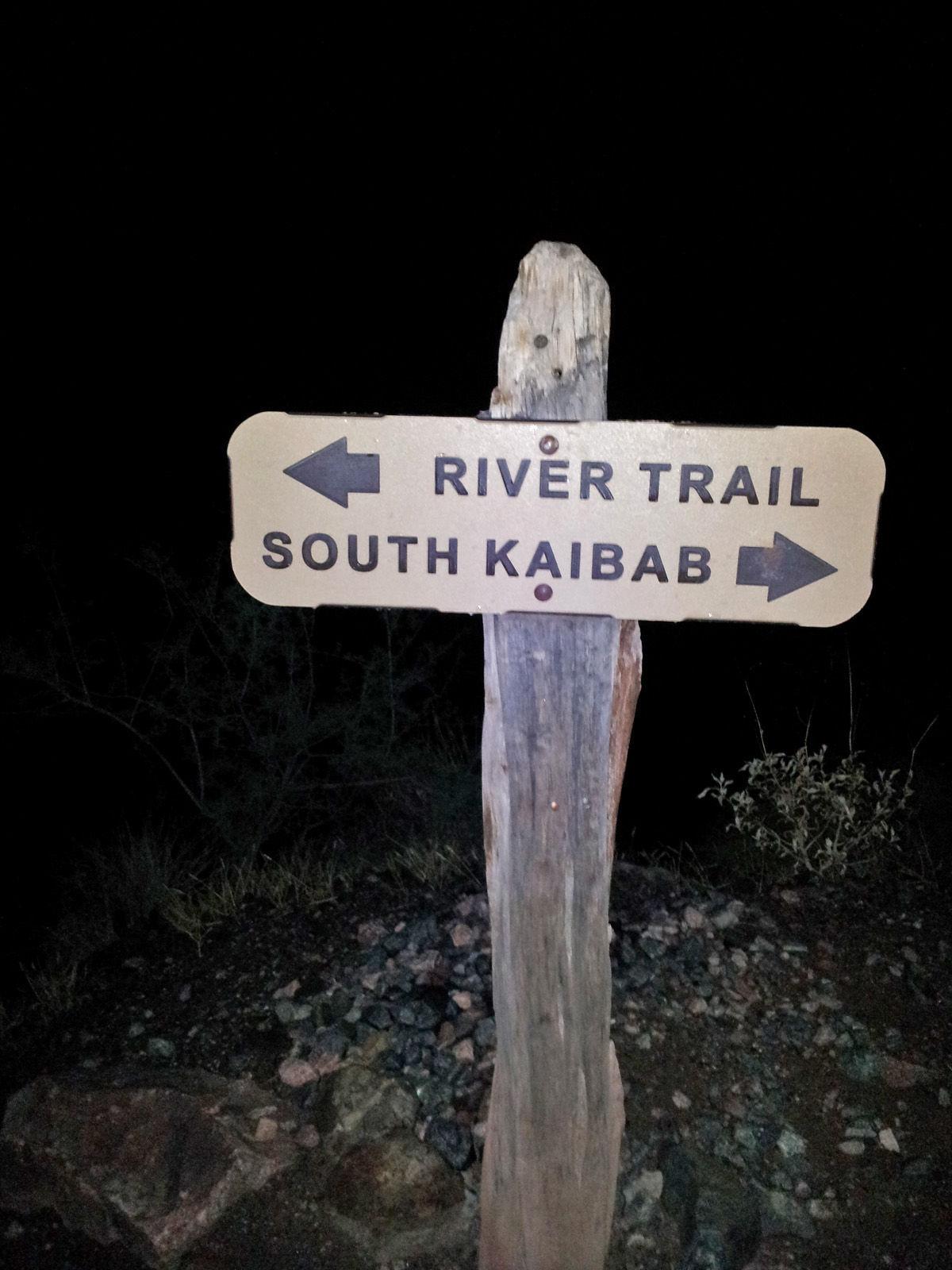 Trail sign at the junction of the South Kaibab and River trails near the black bridge crossing of the Colorado River. 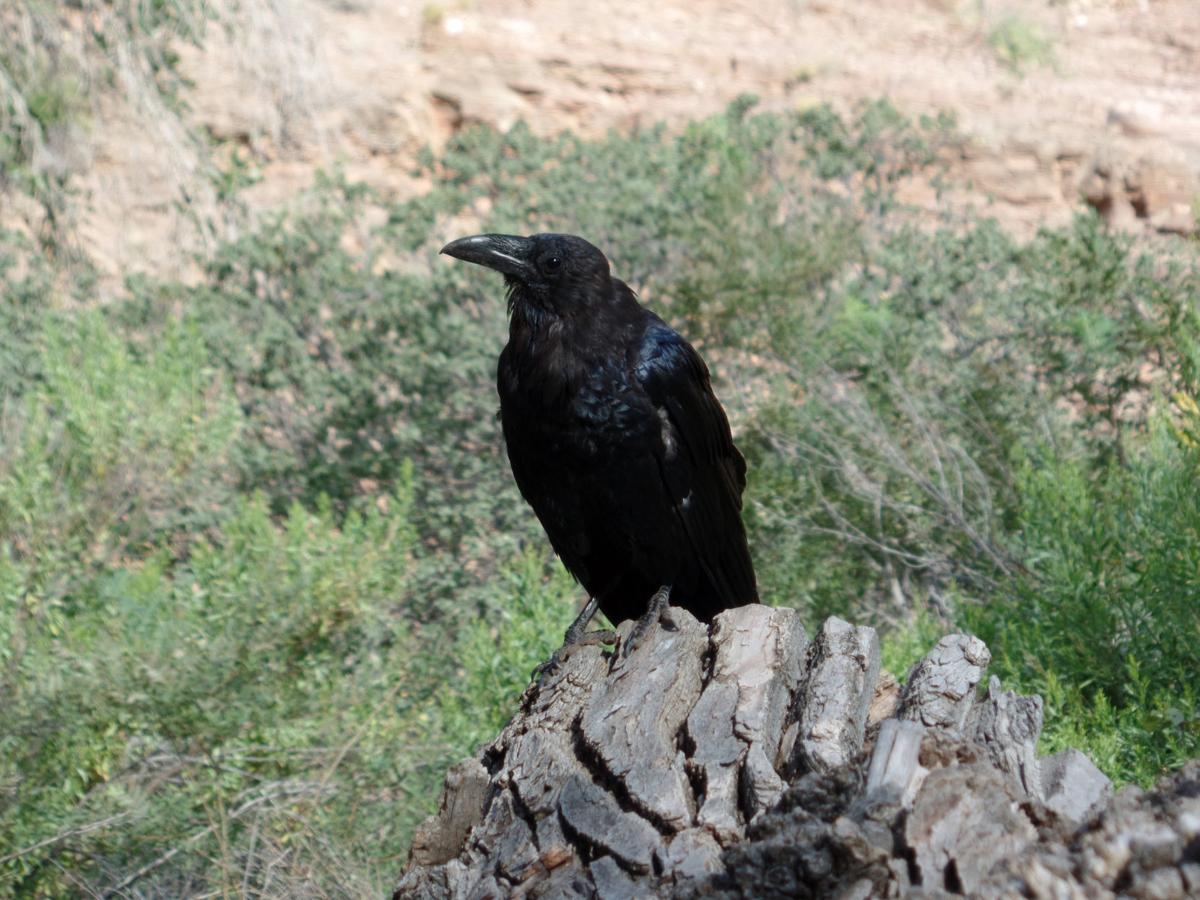 A raven we nicknamed “Eddie” keeps an eye on us at Cottonwood Campground. 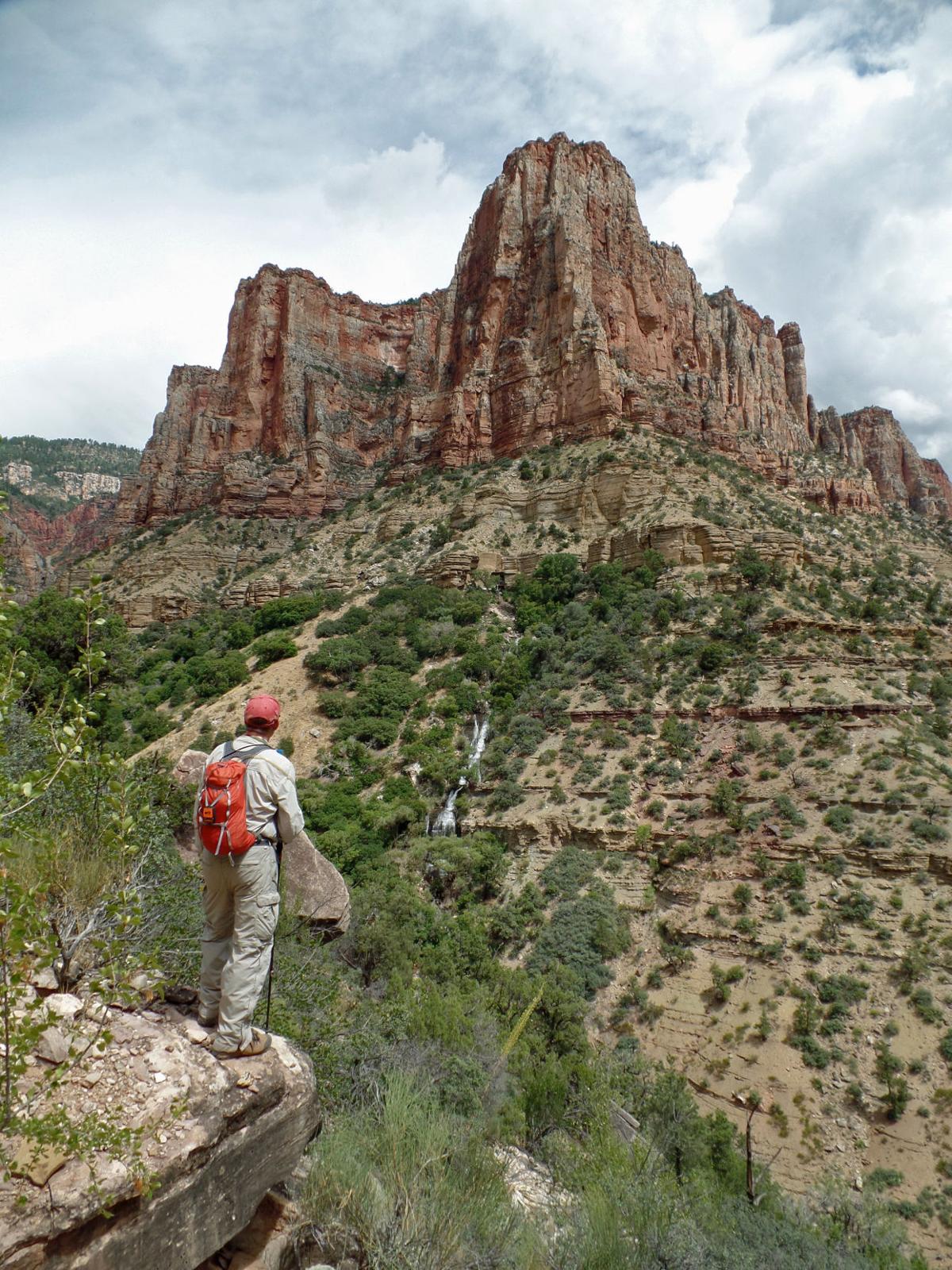 The author looks out across this side canyon of the Bright Angel to Roaring Springs, which provides water for both the North and South Rims of the Grand Canyon. 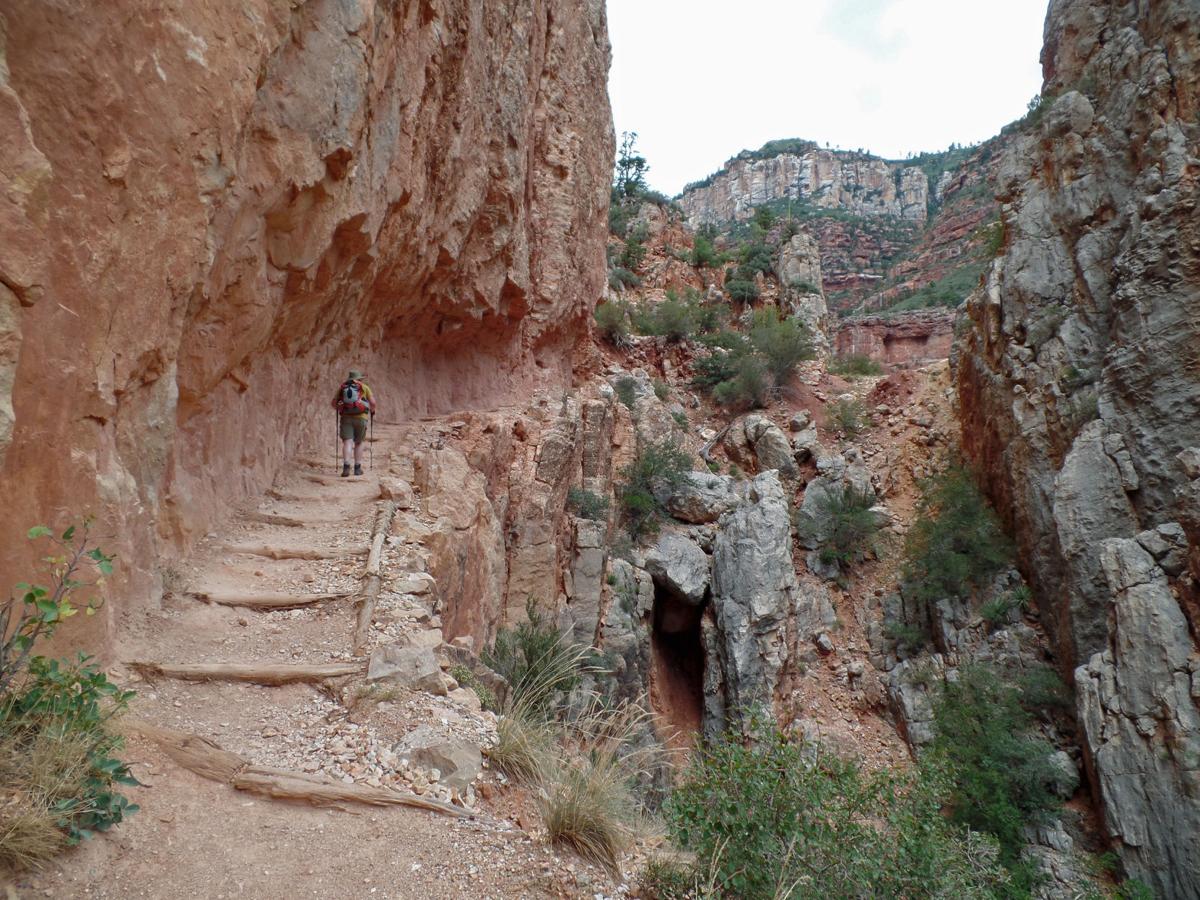 Bill Ferris hikes up the steep trail through the Redwall towards The Needle. 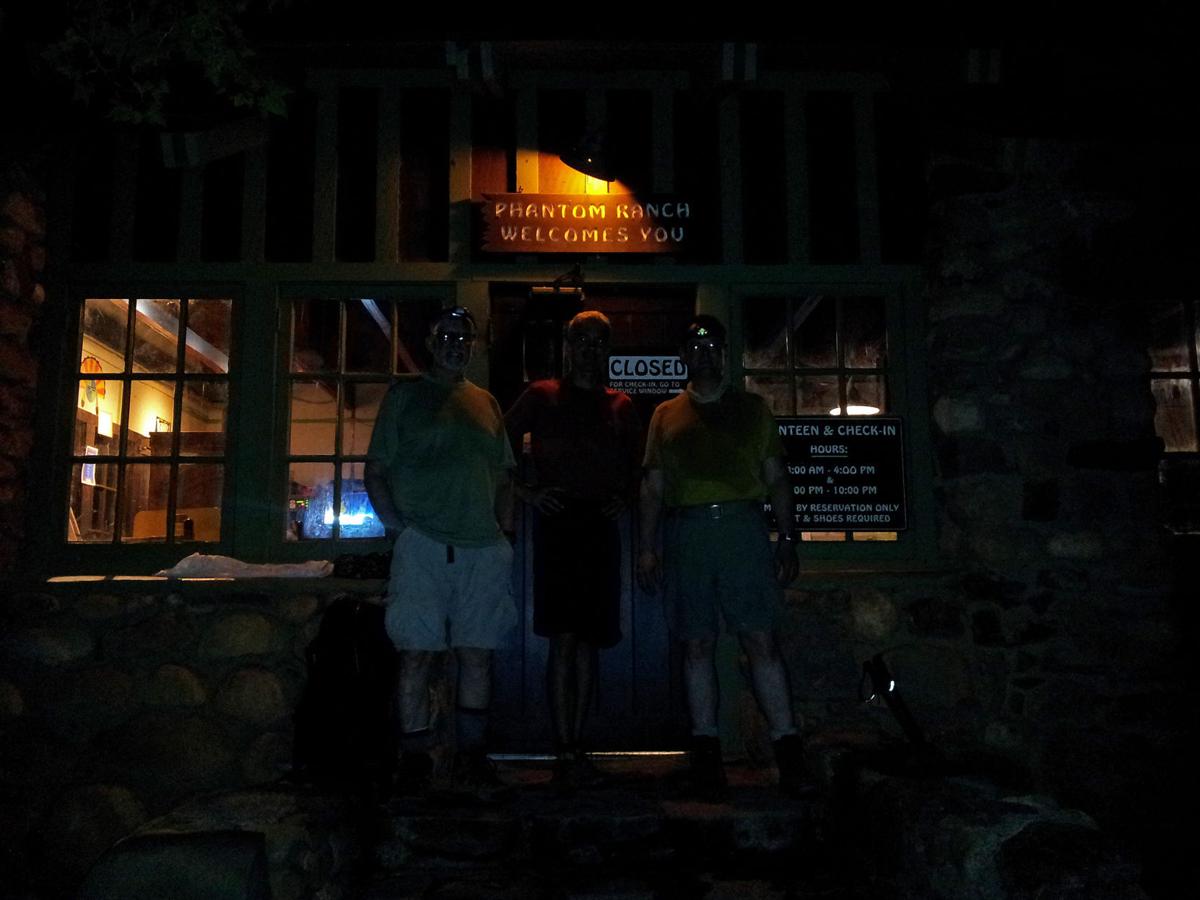 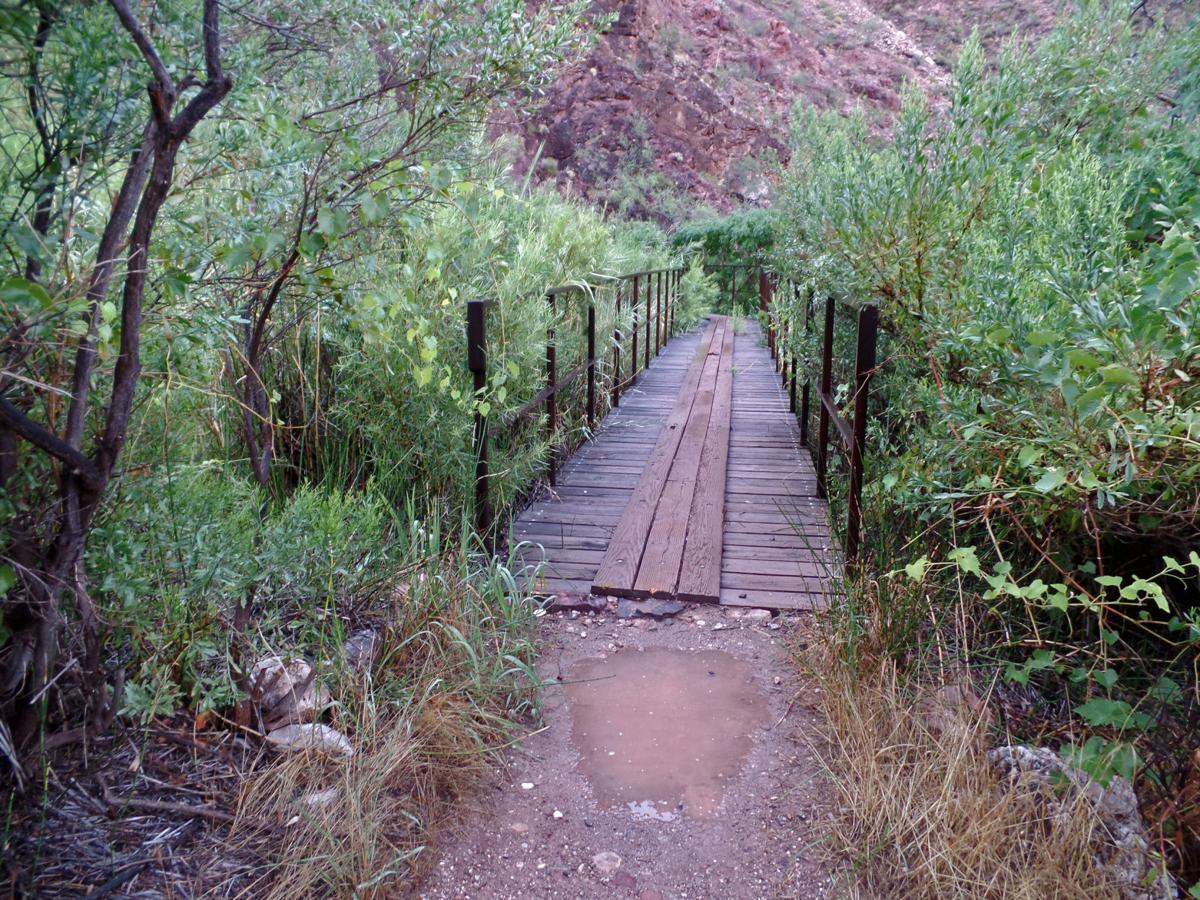 An unusual bridge along the North Kaibab Trail. It crosses over a spring. 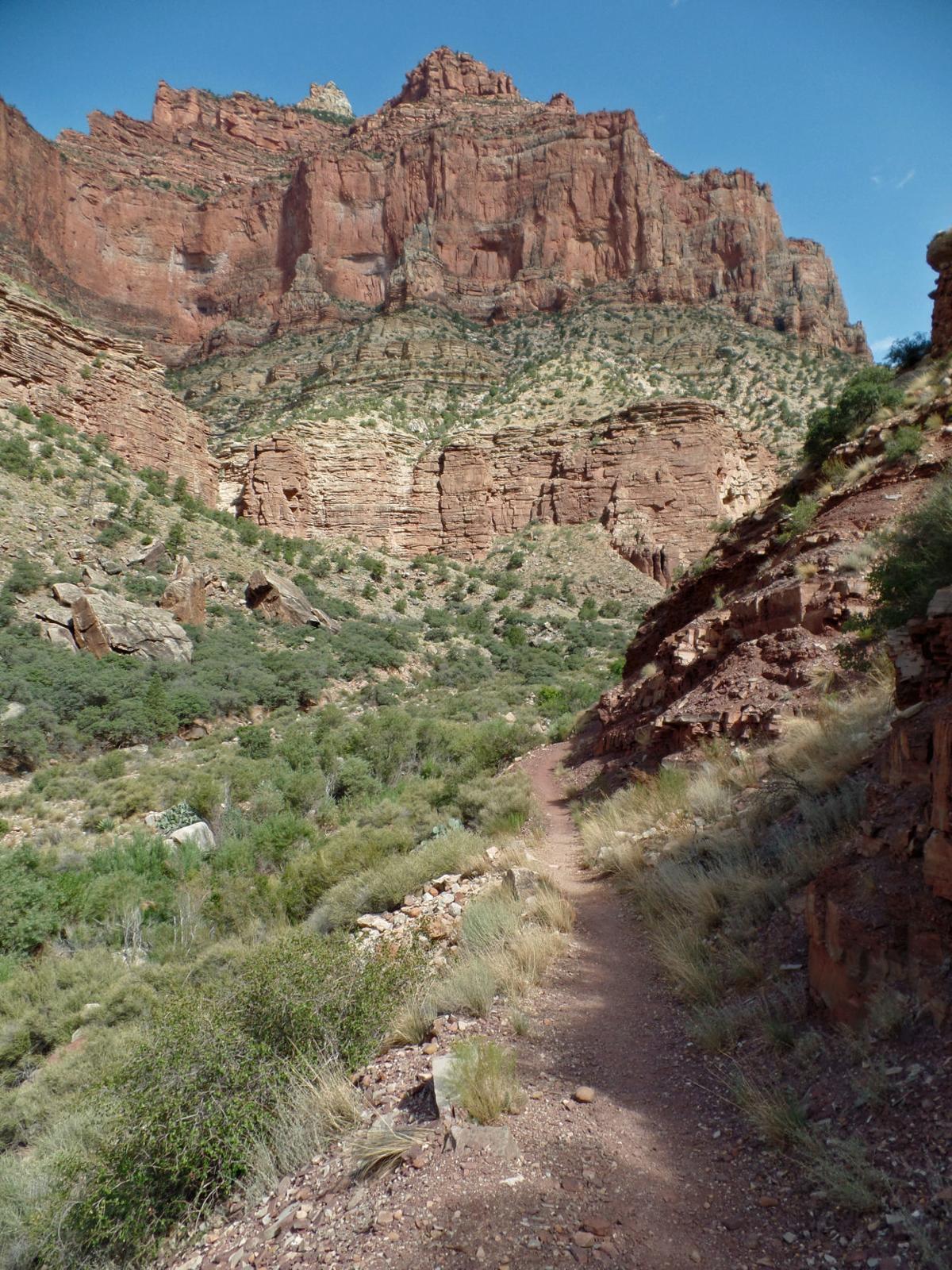 Heading toward the North Rim on the North Kaibab Trail. 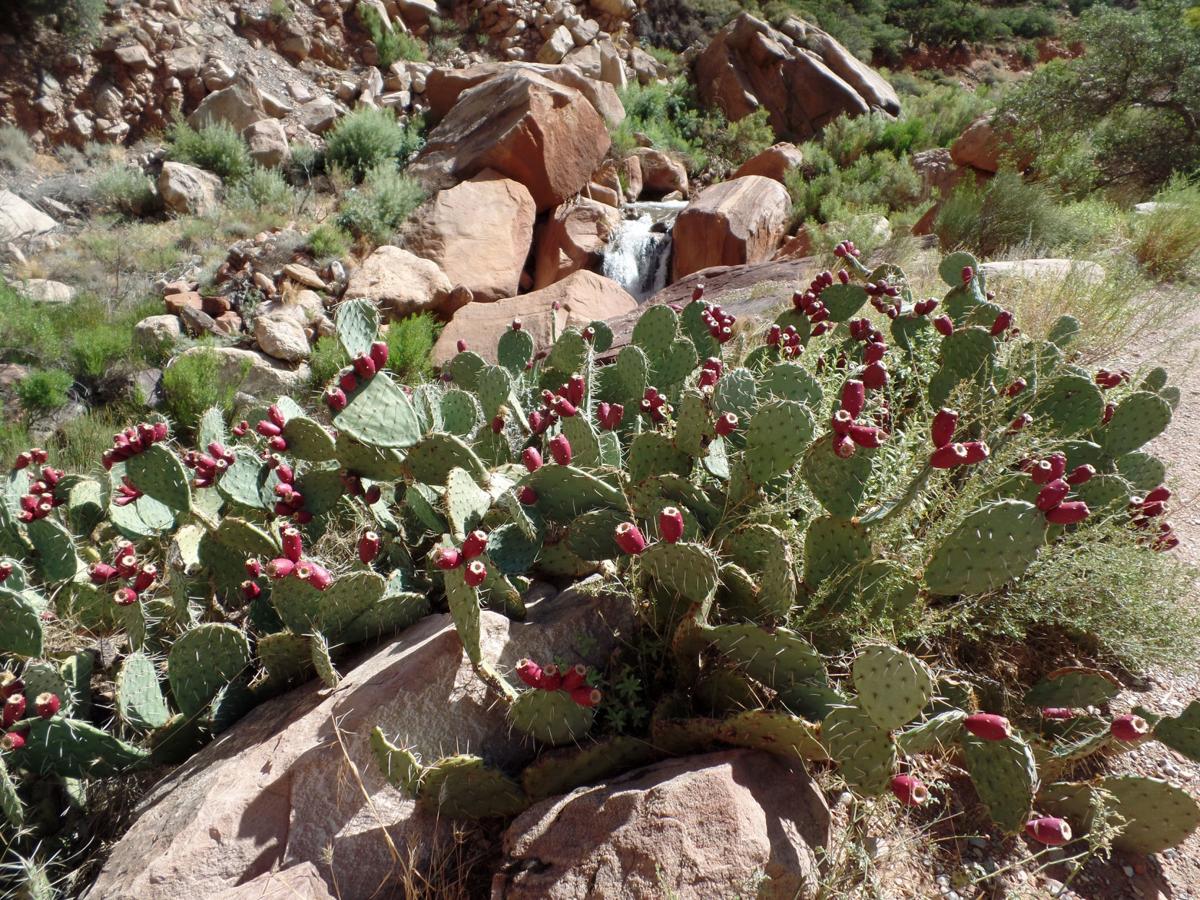 A waterfall along Bright Angel Creek is highlighted by fruiting cactus.

By DENNIS FOSTER Special to the Daily Sun

Below the Tapeats on the South Kaibab Trail is a great place to stop and rest that we call “Big Shady.” When it is hot, this spot is nice and cool. But we are here huddled up above the trail in the shelter of a slight overhang in the cliff, trying to stay dry and wishing that there weren’t so many clouds in the sky. Rather odd given that it is the middle of August! But it is 2:30 in the morning and so far our 21 mile rim-to-rim hike across Grand Canyon is unfolding as planned.

With daytime temperatures soaring above 100 degrees, hiking the Grand Canyon in the summer is difficult. Knowledge of the area and planning are essential. For this hike, we would start in the late evening and count on crossing through the bottom of the canyon when it was relatively cool. I was joined by hiking buddies Bill Ferris and Tim Clark.

Part of the planning involves figuring out which direction to go. Many argue that hiking north to south is best in that you save yourself from having to hike up an extra thousand feet. But a strong argument can be made that the elevation difference actually favors a south to north itinerary. It is 6.8 miles and 4,200 feet to the north rim from Cottonwood Campground, while it is 7 miles and 4,800 feet to the south rim from Bright Angel Campground.

You also have to work out the vehicle logistics. I was able to enlist John Eastwood to join me in driving to the North Rim a couple of days before the hike so I could leave my truck at the North Kaibab trailhead.

On the night of the hike, Tim drove us up to the picnic area near the South Kaibab trailhead. It was 11:15 in the evening as we started down the trail. We had cool temperatures all the way to Phantom Ranch, where the forecast was for an overnight low of seventy-five degrees. Although this would seem to be the perfect time to hike, we encountered only one solitary hiker coming up the trail. The vast expanse seemed wholly ours. While resting on a rock, lights off, enjoying the moon and stars, and mesmerized by the play of light and shadow on the cliffs as the clouds passed by overhead, Tim captured the moment by noting that these would be our “forever memories.”

From Cedar Ridge to Skeleton Point we hoped to be able to navigate solely by moonlight. But increasing cloudiness forced us to use our headlamps to keep from stumbling along the trail. We stopped at “Big Shady” for an hour and at 3 in the morning pushed on down the trail toward the river.

At about a quarter to 4 we reached the junction with the River Trail. It had been only a bit over a week since a hiker died near here after suffering from heat exhaustion. An argument can be made that seeing this sign would lead one to think that this trail will take you to the Colorado River, which it does not.

We passed by the campground, where most of the groups were up and likely motivated by getting an early start up the trail. We stopped by the canteen at Phantom Ranch, which wasn’t open of course, to eat and refill our water containers. For this long and difficult hike it is crucial to explicitly time and monitor your consumption of food and water. There is a new restroom facility here, just north of the dorms, that has replaced the ones right next to the canteen. At a quarter to 5 we started our long 7-mile trek to Cottonwood halfway up the North Kaibab.

It didn’t take long for the sky to start brightening up. The trail winds its way through mile after mile of this very narrow canyon, called “The Box,” making numerous creek crossings. We found it quite pleasant, although having been up for about 24 hours, sleep deprivation was starting to kick in. Tim said that he was so tired that he was afraid that he would literally fall over. I felt pretty good and was the slowest hiker in the bunch. That allowed Tim and Bill to build up significant leads on me and then grab a catnap while waiting for me to arrive. I was anxious to pass through here and get to Cottonwood before taking a longer break.

I pulled into Cottonwood at a quarter past 8. We stayed for another hour. While here we were treated to the attentions of a raven. He made a variety of sounds that seemed designed to win our sympathies. We nicknamed him Eddie (for the famous poet/poem) and I kept up a conversation with him as if I was channeling Carlos Castaneda.

Leaving Cottonwood at a quarter past 9we were now in the full sun and the temperatures were rising. We had only seen about a dozen hikers since leaving Phantom Ranch. Over the course of the morning we also saw five runners. A month from now that will be a vastly different story.

Our next stop was at the Manzanita Rest Area, only a mile and a half from Cottonwood and just past the last bridge over Bright Angel Creek. To my mind, this is where the climb up and out of the canyon really starts. We have 5.4 miles to go and 3,600 vertical feet to climb to reach the rim.

We were definitely feeling the heat as we hiked up through the Tapeats, the Bright Angel Shale, the Muav Limestone and into the Redwall. The trail is unrelenting here as mile after mile you are angling uphill. Above the Redwall, the trail levels off and there is a nice ledge here where we took another break. While here the cloud cover started building up, which helped a great deal.

It was 2 p.m. when Bill and I reached the Supai Tunnel. Tim was well ahead of us and we would see him next at the rim. We spent about a half-hour here before making our push over the final 1.7 miles to the trailhead.

We had rain off and on the rest of the way. I am sure that was why the parking lot was barely half full of vehicles, even though it was only nearing 4 o’clock when we arrived. We stopped at the public showers and then hit the road, stopping for dinner at Jacob Lake. At Cameron we had to detour up to the South Rim so that Tim could retrieve his truck. By the time I reached my home it was a few minutes past midnight – early Sunday morning – and I had been up for some 42 hours. I was not achy or sore, but I was sure weary, and looking forward to reliving my “forever memories.”

Dennis Foster has been an avid Grand Canyon hiker since 1977. He has logged 350 trips spanning over 750 days and over 400 nights in the canyon. He has posted reports on many of his trips on his website, Kaibab Journal, here: http://tinyurl.com/jk48tk9.

The North Kaibab Trail follows the twists and turns of Bright Angel Creek for many miles in a narrow section of the canyon called “The Box.”

Trail sign at the junction of the South Kaibab and River trails near the black bridge crossing of the Colorado River.

A raven we nicknamed “Eddie” keeps an eye on us at Cottonwood Campground.

The author looks out across this side canyon of the Bright Angel to Roaring Springs, which provides water for both the North and South Rims of the Grand Canyon.

Bill Ferris hikes up the steep trail through the Redwall towards The Needle.

An unusual bridge along the North Kaibab Trail. It crosses over a spring.

Heading toward the North Rim on the North Kaibab Trail.

A waterfall along Bright Angel Creek is highlighted by fruiting cactus.