Nigeria has been rocked by days of nationwide protests over police brutality, following widespread claims of kidnapping, harassment and extortion by a controversial police unit known as the Special Anti-Robbery Squad (SARS).

The protests turned bloody on Tuesday in Lagos, the country's largest city, as rallies continued despite a state-wide curfew. Eyewitnesses told CNN that multiple demonstrators had been shot dead by Army soldiers, who then took the bodies away.

President Muhammadu Buhari appealed for "understanding and calm" Wednesday as scenes of chaos unfolded in the city, with buildings set alight and police stations attacked.

The inspector general of police announced 10 days ago that the controversial SARS unit was being disbanded and its officers redeployed.

But protests have continued in cities across the country, with some young Nigerians insisting they will continue to take to the streets until the entire police force is reformed.

So what is SARS and why is it so controversial?

For more than a quarter of a century, SARS took the lead on the country's most serious crimes -- armed robbery, kidnapping, assault and murder. But over time it has become notorious for alleged abuses committed with apparent impunity.

The government promised to overhaul the unit in 2018 following a months-long social media campaign by Nigerian activists protesting alleged human rights abuses by the squad. In January 2019, the police announced further reforms to the unit.

But critics say the #EndSARS campaign has resulted in little change.

Human rights group Amnesty International released a damning report in June this year in which it said it had documented 82 cases of police brutality in Nigeria between 2017 and 2020.

"Detainees in SARS custody have been subjected to a variety of methods of torture including hanging, mock execution, beating, punching and kicking, burning with cigarettes, waterboarding, near-asphyxiation with plastic bags, forcing detainees to assume stressful bodily positions and sexual violence," the report said.

"Findings from our research indicate that few cases are investigated and hardly any officers are brought to justice on account of torture and other ill-treatment."

When contacted by CNN earlier this month regarding allegations of misconduct by SARS officers, Lagos state spokesman Muyiwa Adejobi said that all complaints against its officers were carefully investigated and appropriate sanctions applied to offenders. He encouraged people affected by police misconduct to report the abuses.

How did the recent unrest begin?

After weeks of outcry online from young people in the country over claims of kidnapping, harassment and extortion by SARS, protesters began taking to the streets about two weeks ago.

While the demonstrations have been largely peaceful, police have been accused of using excessive force against some protesters, allegedly causing a number of deaths and injuries.

Amnesty International said in a tweet Tuesday that "thugs and sponsored hoodlums" were also attacking peaceful protesters across the country.

Members of the Nigerian diaspora community also organized protests in solidarity with their counterparts at home, with demonstrations held as far afield as Canada, England, Germany and the United States.

As public anger mounted, the Inspector General of Police, Mohammed Abubakar Adamu, announced the dissolution of SARS on October 11. In a video the following day, Buhari addressed the "genuine concerns and agitations by Nigerians about the excessive use of force, and in some cases extrajudicial killings and wrongful conduct, by men of the Nigerian police force."

Buhari said the disbanding of SARS was "only the first step" in extensive police reform. "We will also ensure that all those responsible for misconduct or wrongful acts are brought to justice," the president added, insisting that "the vast majority of men and women of the police force are hard-working and diligent in performing their duties."

A new tactical police unit, the Special Weapons and Tactics (SWAT) team, has been created to "fill the gaps" left by the disbandment of SARS and will be trained by the International Committee of the Red Cross, Reuters reported Monday.

But protesters are demanding wider reforms and further protections against the police, including independent oversight and psychological evaluation of officers.

Amnesty said many doubt the promised changes will make a difference. "Nigerians are skeptical of authorities' pledge to end police atrocities because the past claims of reforming SARS have turned out to be empty words," the rights group tweeted Monday.

A 17-year-old died in police custody on Monday in Kano, a city in the north of the country, after allegedly being tortured, according to Amnesty International.

Many protesters and journalists were assaulted by police in the capital Abuja on the same day, the rights group said. Videos on social media show dozens of cars belonging to protesters burning and Amnesty said three people had died.

What happened in Lagos?

Violence erupted Tuesday evening in Lagos, hours after state governor Babajide Sanwo-Olu imposed a 24-hour curfew and deployed anti-riot police to the city in an attempt to prevent further unrest.

Eyewitnesses told CNN they had seen multiple demonstrators shot by soldiers during a peaceful protest at the city's Lekki tollgate.

Human rights group Amnesty International said that after an on-the-ground investigation it had found that 12 people were killed during protests in two locations in Lagos on Tuesday.

It said that "evidence gathered from eyewitnesses, video footage and hospital reports" confirmed that over a period of about two hours "the Nigerian military opened fire on thousands of people who were peacefully calling for good governance and an end to police brutality."

The army has dismissed reports that protesters were shot dead as "fake news." The Nigerian Army and police did not return requests for comment.

Eyewitness Akinbosola Ogunsanya, a talk show host on Afrosurge Radio, said the shooting began shortly after the lights at the tollgate were switched off. "Members of the Nigerian army pulled up on us and they started firing," he said. "I just survived, barely."

Another witness, Temple Onanugbo, spoke to CNN from his home nearby and said he heard what he believed were bullets being fired. He said the sound lasted "for about 15 to 30 minutes." Onanugbo said he saw "multiple bodies laying on the ground."

The state government has ordered an investigation into the incident, a spokesman for the governor said.

No group immediately claimed responsibility for the attack. Israel has been suspected of carrying out targeted killings of Iranian nuclear scientists, but did not comment on the incident.

Earth is 2,000 light-years closer to supermassive black hole at the center of our galaxy than we thought

To be clear, the changes don't mean Earth is plunging toward the black hole, the observatory said. Rather, the new map more accurately identifies where the solar system has been all along.

Bodies of men killed in Vesuvius eruption unearthed in Pompeii

Remains of what are believed to have been a rich man and his male slave trying to flee the eruption of Mount Vesuvius have been discovered in Pompeii.

Officials in Jasper, a town in Canada's Alberta province, have put up signs asking motorists to avoid allowing moose to lick the salt off their cars.

SUMATRA, Indonesia (AP) — With his hand clamped tightly over her mouth, she could not scream, the 16-year-old girl recalls – and no one was around to hear her anyway. She describes how her boss raped her amid the tall trees on an Indonesian palm oil plantation that feeds into some of the world’s best-known cosmetic brands. He then put an ax to her throat and warned her: Do not tell.

LONDON (AP) — Dave Prowse, the British weightlifter-turned-actor who was the body, though not the voice, of arch-villain Darth Vader in the original “Star Wars” trilogy, has died. He was 85.

LONDON (AP) — AstraZeneca and Oxford University on Wednesday acknowledged a manufacturing error that is raising questions about preliminary results of their experimental COVID-19 vaccine.

MEXICO CITY (AP) — Tampa Bay Rays outfielder Randy Arozarena has been arrested in Mexico’s Yucatan state for a situation involving an apparent custody dispute, two weeks after he won the Babe Ruth award for the Most Valuable Player in the postseason.

NEW YORK (AP) — New York Gov. Andrew Cuomo said officials are working on a winter plan for the coronavirus that will add metrics for how the state designates virus hot zones.

BRUSSELS (AP) — Please leave a chair empty at this year's family Christmas dinner as a precaution, or face the possibility of having that chair empty forever. 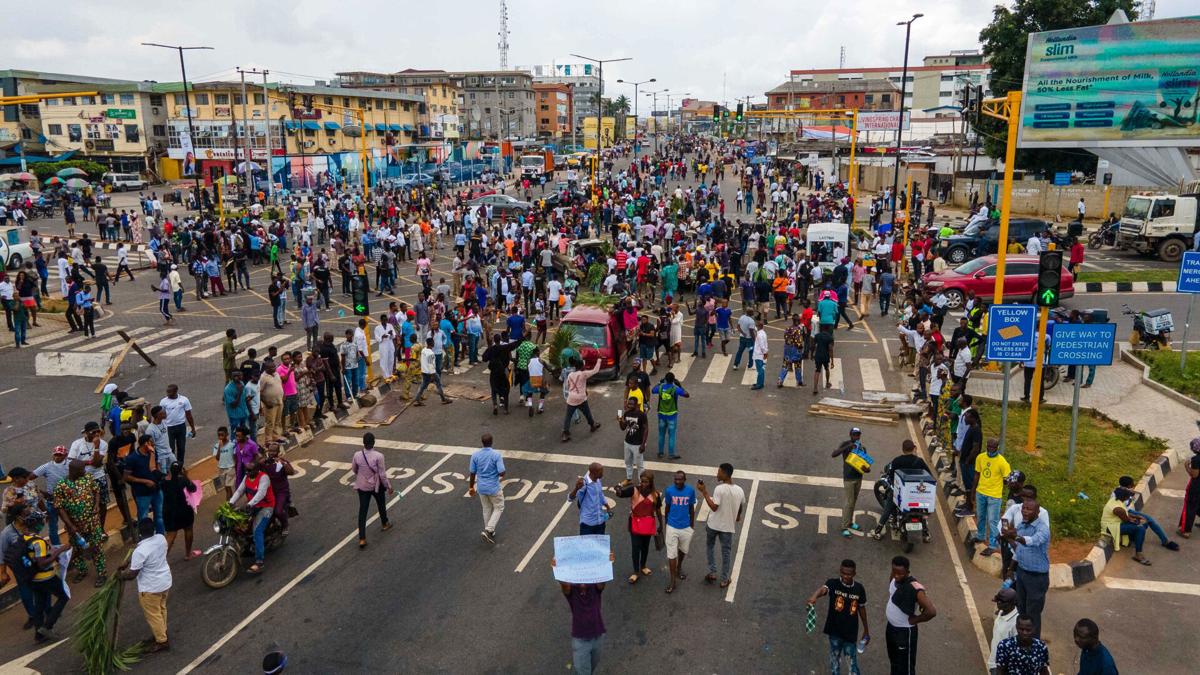 Protesters throng the streets during a demonstration against police brutality in Ikeja, Lagos, on October 19, 2020. 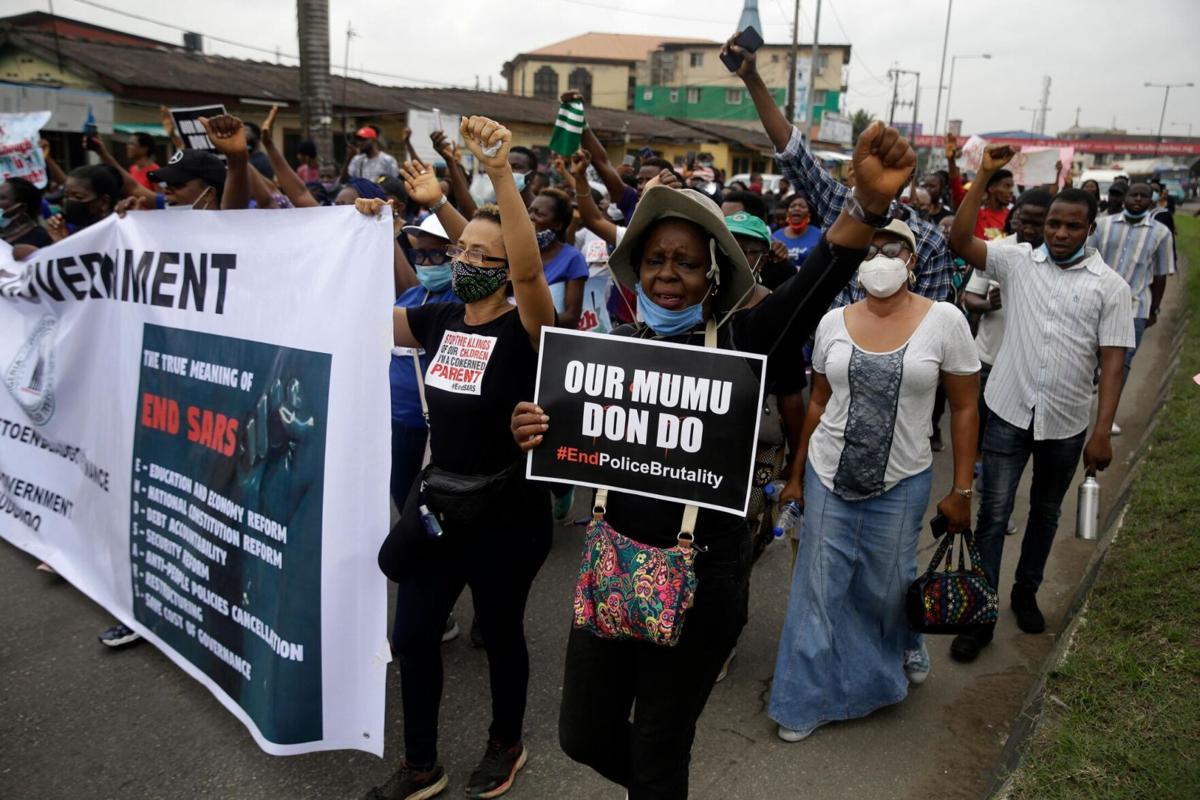 People hold banners as they demonstrate on the street to protest against police brutality in Lagos, Nigeria, Saturday Oct. 17, 2020. Nigerian protests against police brutality continued Saturday for the tenth day, with demonstrators fending off attacks from gangs suspected to be backed by the police, warnings from the Nigerian military, and a government order to stop because of COVID-19.