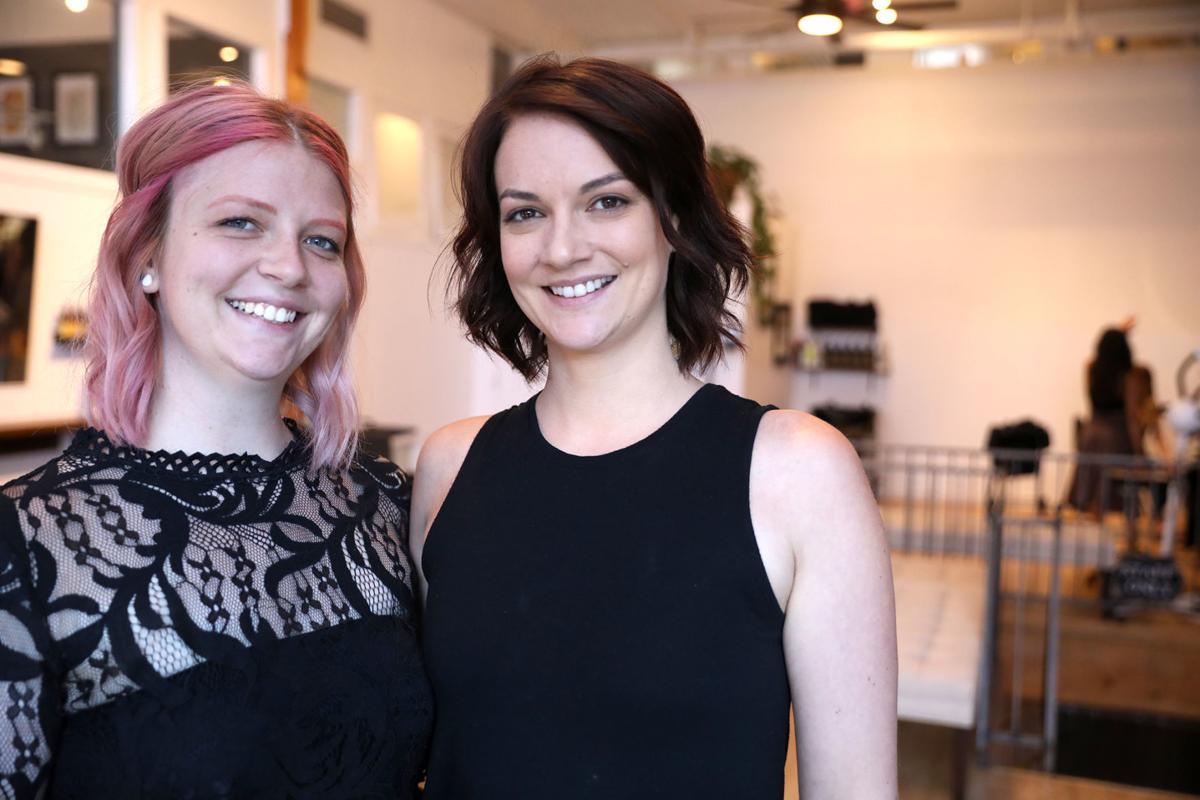 Sisters Lauren and Kaylie Ryan are co-owners of Wildflower Salon.

Wildflower Salon has a street address of 107 N. San Francisco St., but the business fronts onto Heritage Square. 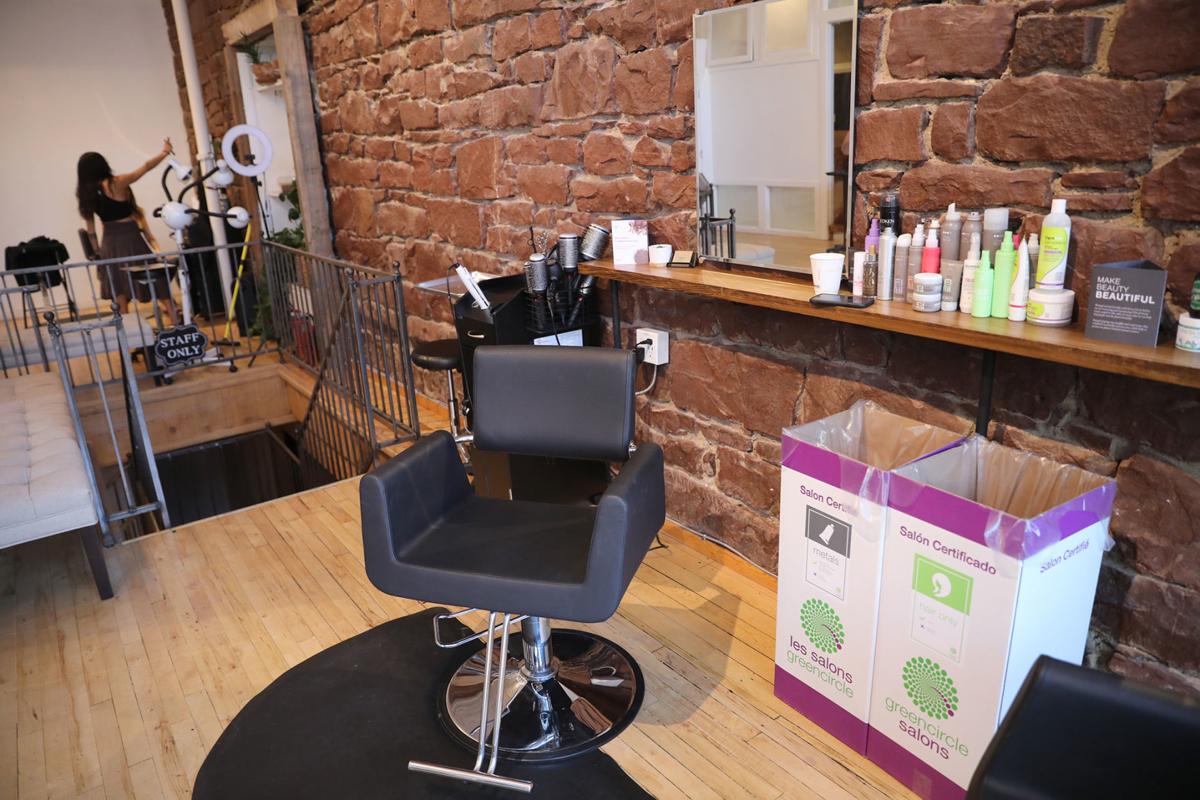 After years of cutting and styling in Flagstaff, sisters Lauren and Kaylie Ryan took the plunge and opened Wildflower Salon after finding out from a customer that the salon they were previously working in would be closing.

In late May, a client of theirs in the real estate business walked into Tirzah Salon for her appointment with some news.

"You know this place is on the market, right?" she said.

The next day Lauren and Kaylie looked at a vacancy on San Francisco Street which fronted onto Heritage Square, and by the end of the week they signed the lease.

"Lauren and I had talked for years about one day opening a salon, but it was never a realistic thing, and at that moment when we found out Tirzah was being sold it was like, 'alright it's time to open our salon,'" Kaylie said.

"We just fell in love, it was the perfect spot," Lauren chimed in, with her matching pink hair and eyebrows. "It kind of just fell into our hands."

Though Kaylie is older than Lauren by two years, one might think they were twins from their shared history. They moved from New Mexico to California and then Mesa, where they both attended Avalon School of Cosmetology. After getting licensed, they both joined their older sister in Flagstaff and worked at Aveda, Tirzah and now Wildflower.

"I think it was just mainly coincidence of how things ended up going and just the fact that we even ended up living in the same place and we've worked in the same salons in Flagstaff," Kaylie said. "We had the same professional experiences, so I think that really helped when it was time for us to open the salon."

The sisters both agreed that working for themselves as stylists in other salons was a good transition into opening their own business – in terms of learning to be responsible for everything and knowing what worked and what didn't.

"Just coming from very corporate kind of settings we knew that we just wanted to be the best owners we could be but still be friendly and kind and not micromanaged," Lauren said. "All stylists here have complete freedom with their schedule and the products they use and the color line they use, and that makes them to be as creative as they can be."

"After working in salons for eight years you find the things that people wish that they had, or the things that they don't like," Kaylie said. "So coming in here it was like, 'alright, I'm going to be spending extra money on comfortable shampoo bowls'."

Besides the shampoo bowls, the sisters made sure there were hooks under the counters for customers' bags and outlets nearby the stations.

"Our clients' experience is definitely the 100% most important thing," Kaylie said, adding they also used client feedback to ensure that Wildflower would be minimal in decorations, with a clean, decluttered feel.

"It was important for us for almost everything in here to serve a purpose, and if it doesn't serve a purpose we don't really want it in here, because I think it's so easy to accumulate things," Kaylie said. "It's not a tiny [space], but it's not huge, so we just want to keep everyone's working space as easy to work in as possible without filling it with a bunch of stuff."

Many of the shop's features were kept in place, including the planked wooden floors, a wall made of stone and the other lofty white walls.

"With us seeing hair, the lighting is really important, so having big white walls is important for us to see hair color – to truly see someone's head," Kaylie said.

While Lauren specializes in cutting and barbering, Kaylie does color, and the two often both work on the same client – whether male or female.

"We're a gender neutral salon. So when you go to book your appointment, it's not a women's cut anymore, it's not a men's cut," Kaylie said, estimating 30 to 40% of their clientele are men. "It's based on how short your hair is and how long it'll take. Our prices are gender neutral as well, so we are very welcoming of anyone who steps foot in our salon."

Though Lauren said long hair is especially popular in Flagstaff, she notes that "the lob" (a long bob that is slightly angled) is a classic that is also often requested.

For color, Kaylie said the balayage (blended highlights) is still in.

"That's definitely always there and then through the summer we're doing a ton of blondes. Just dimensional hair color that [looks] natural is popular." she said.

And all that hair and leftover color doesn't just end up on the floor or down the drain.

"Basically we recycle almost everything in this salon, including peoples hair, color tubes, used foils – like everything," Kaylie said. "And so it reduces the waste in our salon by 95%. So that is very important to us – just being responsible members of our community."

Wildflower employees make sure the waste ends up in specific boxes, which end up getting sent to Green Circle Salons and properly disposed of.

Not surprisingly, the products used and sold at Wildflower are all eco-friendly and mostly organic.

Though the name "Wildflower" links with the sister's passion for being a green salon, there is another meaning behind the name and logo.

"It's a reference to a Tom Petty song, and we love Tom Petty," Lauren said. "And it's kind of an ode to our mom who passed away a year ago – she would have loved this place."

Salon Brio owner Brandi Palmer, 28, chose beauty school over nursing school, but still feels she has been able to help individuals in her five…

Dear EarthTalk: My hairdresser was just diagnosed with leukemia and I wonder if there is a link between the chemicals in hair dye and cancer?

The Cut Flagstaff, a hair salon located downtown on Birch Avenue, was damaged late Friday night and has a broken window.

Sisters Lauren and Kaylie Ryan are co-owners of Wildflower Salon.

Wildflower Salon has a street address of 107 N. San Francisco St., but the business fronts onto Heritage Square.