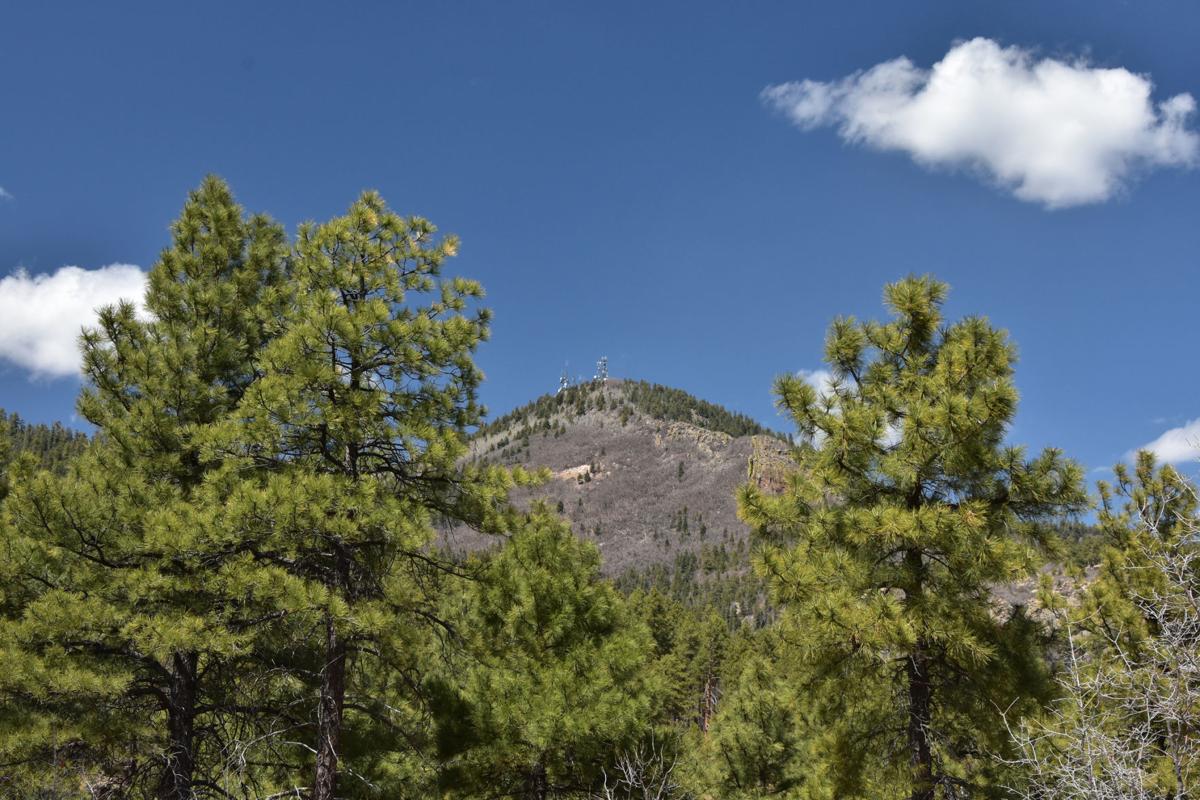 Bill Williams Mountain, just south of the city of Williams. 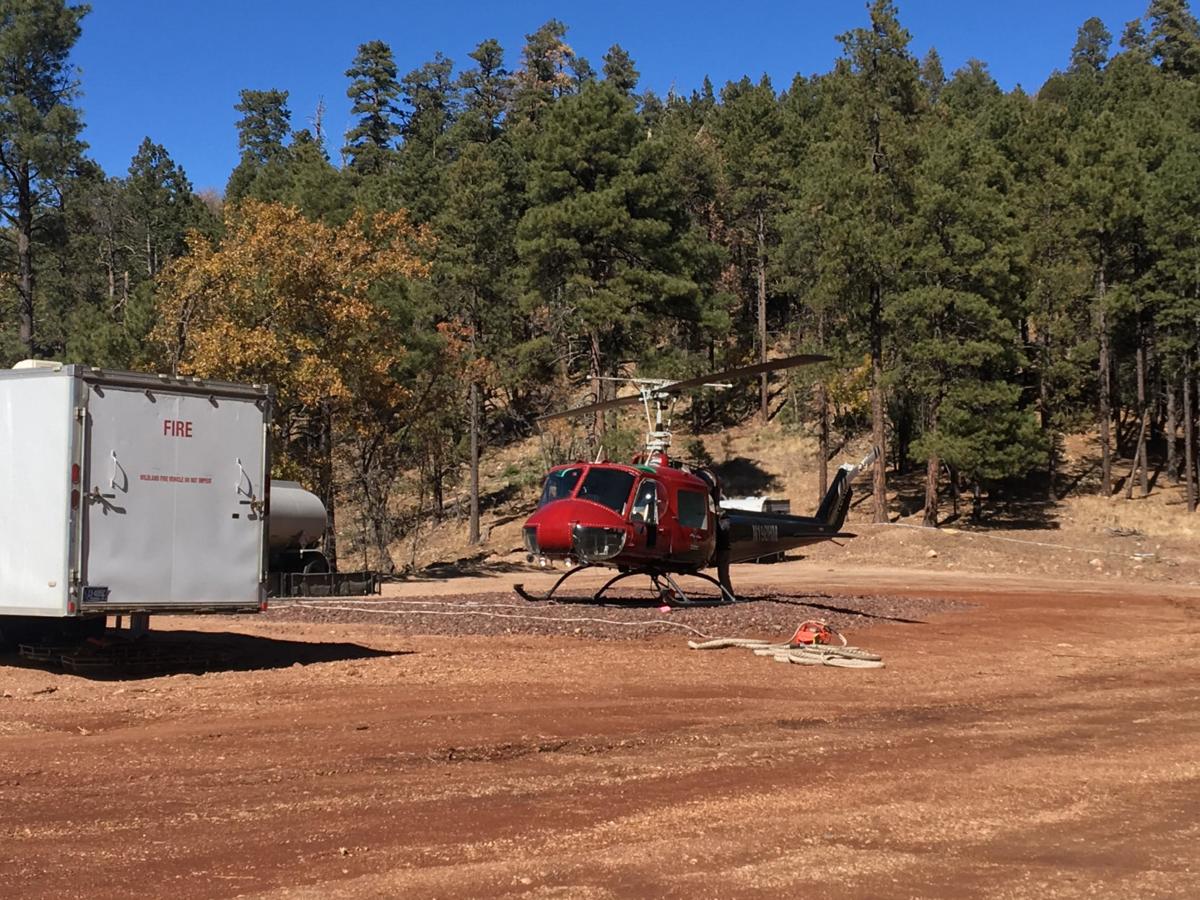 A helicopter sits on the ground near the Bill Williams Mountain. 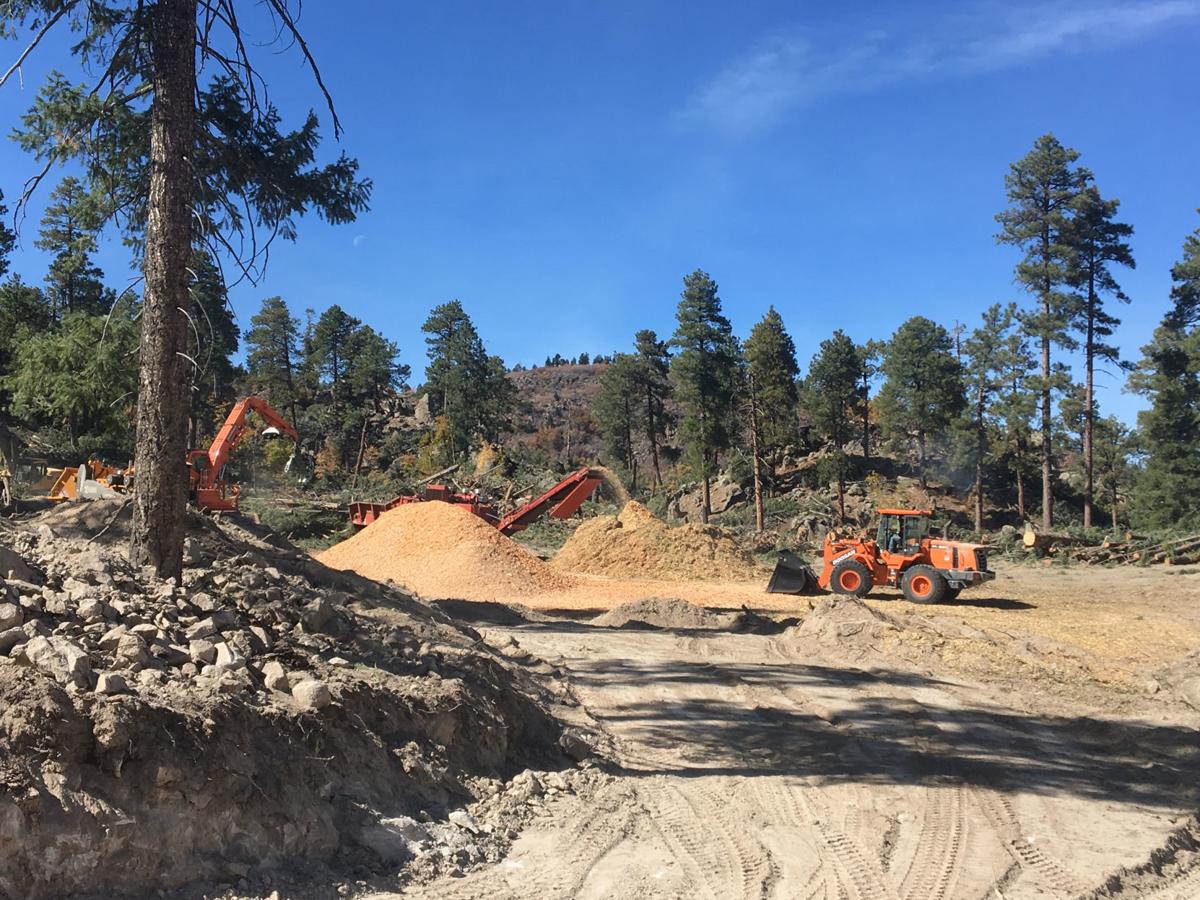 Woods chips sit in piles near the mountain. 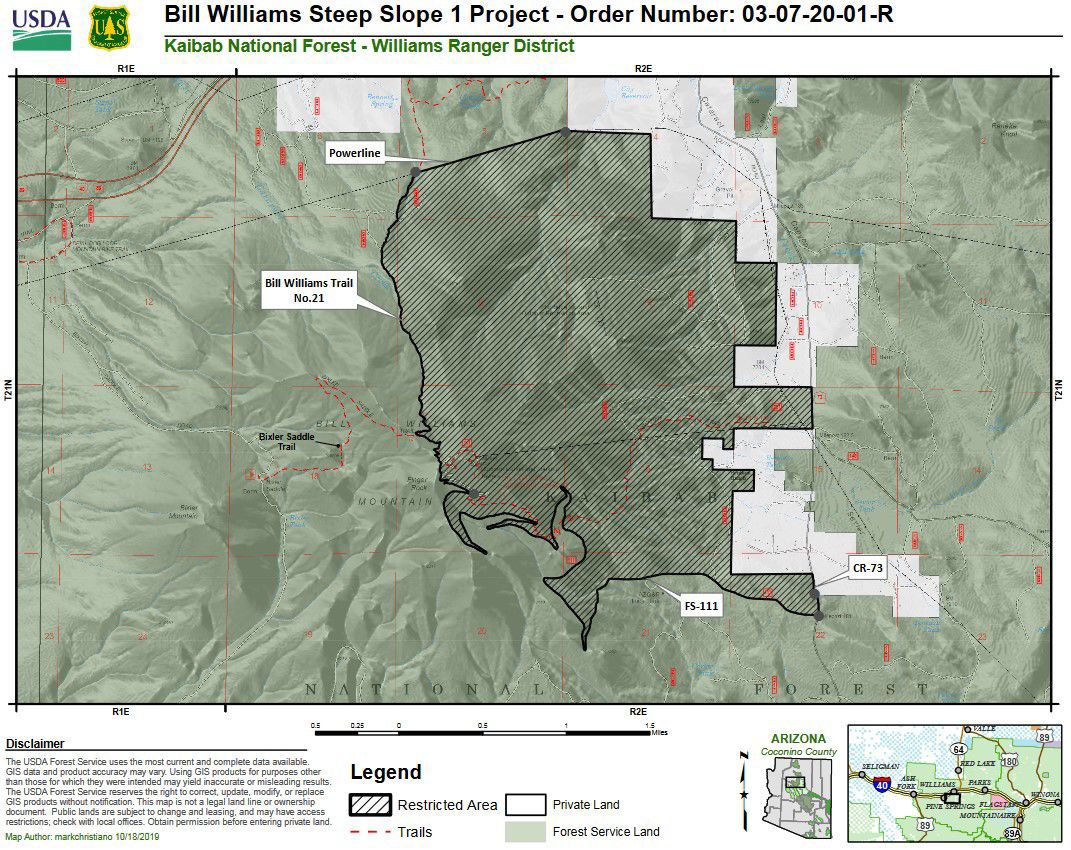 A map of the project area. 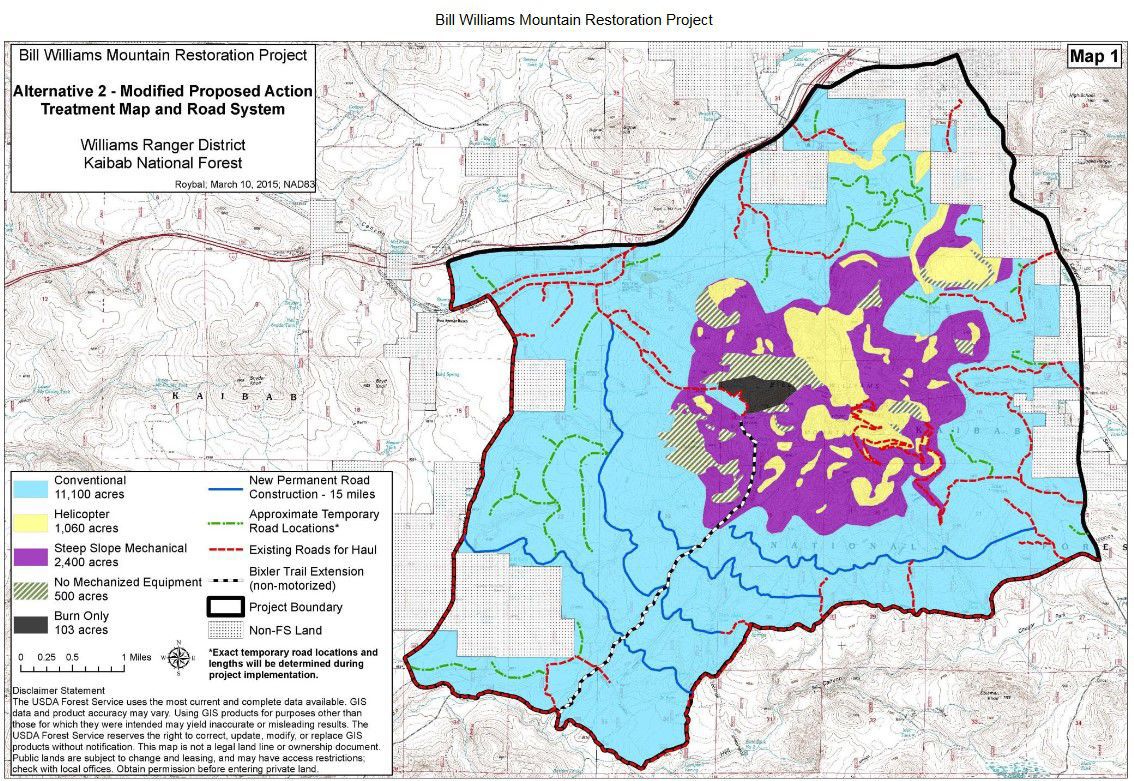 A map of the project area.

Bill Williams Mountain, just south of the city of Williams.

Woods chips sit in piles near the mountain.

Bill Williams Mountain juts into the sky south of the City of Williams in northern Arizona and its ridges can’t be missed on the horizon from the city’s historic downtown district.

But the mountain above “the gateway to the Grand Canyon” also holds a mountainous threat of fire and post-fire flooding.

The dense forest covers the peaks and mountainsides, as the dead and dried droppings from the ponderosa pine and mixed conifer sit on the ground ready to burn, and burn hot, said Jay Smith, Coconino County forest restoration director.

Bill Williams Mountain’s 15,200 acres have been identified as the biggest threat for post-fire flooding in Coconino County. With the right amount of rain after a wildfire, studies show that water, mud and debris could flow down the mountain and into the city's streets. The potential damage is expected to cost hundreds of millions of dollars with 950 buildings and many possible lives threatened.

In short, a post-fire flood could lead to a major disaster, city mayor John Moore acknowledged.

“The watershed goes; the city goes, and we no longer have a City of Williams,” Moore said.

But land managers around the city have partnered together to cut and haul the excess fire fuel off the mountain to reduce the impacts of post-fire flooding. Helicopter logging operators have already begun cutting their way through their contracted 300 acres for around $2 million. The U.S. Forest Service temporarily closed access to a large part of the mountain to lower the chance of injuries as helicopters haul trees and tree bits over the forest canopy.

The total 15,200 acres will be treated through a combination of flat ground mechanical, steep slope mechanical and helicopter thinning, according to Forest Service documents. Any trees larger than 18 inches in diameter at chest height will be left on the forest. The goal is to reintroduce low temperature fire to the ponderosa pine and mixed conifer ecosystem in order to ensure the forest never returns to the current amount of trees per acre.

Members of the partnership say it is moving as fast as it can to complete the project, but the work is expensive and funds have been hard to come by.

The partnership comprises Coconino County, the Forest Service and its nonprofit partner the National Forest Foundation, and the Arizona’s Department of Forest and Fire Management that are all putting money toward the project. Coconino County Board of Supervisor Matt Ryan said the partnership acknowledged the project would be costly, but felt the costs were worth it.

“Rather than having a fire come in and having a tremendous effect on the mountain itself, why not be proactive?" Ryan said. "Let’s get ahead of it and help mitigate the danger by having treatment that hasn’t been done on the mountain in many years.”

The cost of action

This project is not the first of its kind.

One lesson the partnership placed front-and-center in their project was to haul everything cut, including pine needles and forest debris, off the mountain, said Spencer Plumb, Arizona Program Manager with the National Forest Foundation. Doing so would avoid either a situation like the Museum Fire or the possibility of a lightning strike starting a fire.

Forest Service officials have said the Museum Fire that burned 1,961 acres started when forest thinning equipment struck a rock and ignited dead and down forest droppings. The fire has created an increased post-fire flood danger above parts of Flagstaff. The official post-fire report has not been released in that project.

Currently Markit! Forestry is expected to conduct a maximum of five acres of treatment per day, but winds at higher elevations, cold temperatures and high stress on equipment can lead to unpredictable delays and the need for highly trained operators.

Helicopter logging is already an expensive prospect. Hauling bits of trees in addition to logs to reduce the chance of an unforeseen fire adds more work and more cost. However, Plumb and the partners were in agreement that the extra cost is worth it.

“If there were a fire, it’s not going to be spreading from tree to tree,” Plumb said.

By comparison, FWPP had its $10 million voter-approved bond initiative jump start its project, and used the money for ground-based mechanical, steep-slope operations and helicopter logging.

Ryan acknowledged the high costs and slow pace could seem counter intuitive, but said the costs of not doing anything were higher.

The cost of inaction

Last year, a Northern Arizona University economic study found that if a high severity fire and significant amount of water were to hit Bill Williams Mountain, the impacts would be catastrophic.

Any post-fire flood waters running down the mountainside above the city would flow through the city streets. It would cover the Grand Canyon Railway and threaten 950 structures with six feet of water, mud and anything else the flood picked up along the way. The water would then run into the raised interstate that runs through the northern part of Williams and would act like a levee, if it were not breached, leaving the city flooded.

The study said damages could cost between $379 to $694 million. Underneath that huge economic cost, the threatened structures also indicate the possibility lost life under the worst circumstances.

As the partnership begins to look at the next chunk of acreage, it is looking to leverage more money to push toward its goal, Ryan said.

“It’s going to cost a similar amount of money. Do we have the money identified yet? No, we do not,” Ryan said. “Through these partnerships hopefully we can combine all of our money and come up with the next phase of it.”

Right next to 4FRI

The Four Forest Restoration Initiative is the largest restoration project in the country, aiming at restoring forest health in northern Arizona through thinning, and revitalizing the logging industry.

Bill Williams Mountain is within 4FRI’s footprint, but the slopes are not a part of 4FRI. The slopes were chosen to be excluded from 4FRI because traditional mechanical ground thinning equipment couldn’t make it up the steep and cluttered slopes.

But due to the large risk of post-fire flooding, the current partners wanted to give it special attention to ensure the work was completed, said Debra Mollet, district ranger of the Kaibab's Williams and Tusayan Ranger District.

“It’s such a high priority that we will bring the funds together to do these parts that are tricky,” Mollet said.

The base of the mountain, where mechanical treatments are able to maneuver, is covered by 4FRI. More than 1,000 acres were hand thinned on the south side of the mountain’s base, Mollet said.

Many forestry experts would be quick to point out that rebuilding a forest industry while also protecting the four forests is a large endeavor.

“We’re going to be learning lots of lessons that are new lessons that maybe the folks on FWPP didn’t see because of the different kind of arrangement," Mollet said.

In the mind of many partners, the only alternative would be to sit and wait for a fire and potential flood within the shadow of Bill Williams Mountain. And their partnership hopes the project can have a meaningful impact before a fire starts.

As large wildfires become a reality throughout the west, the road ahead is steep and rocky in Flagstaff, as illustrated by the past week the F…