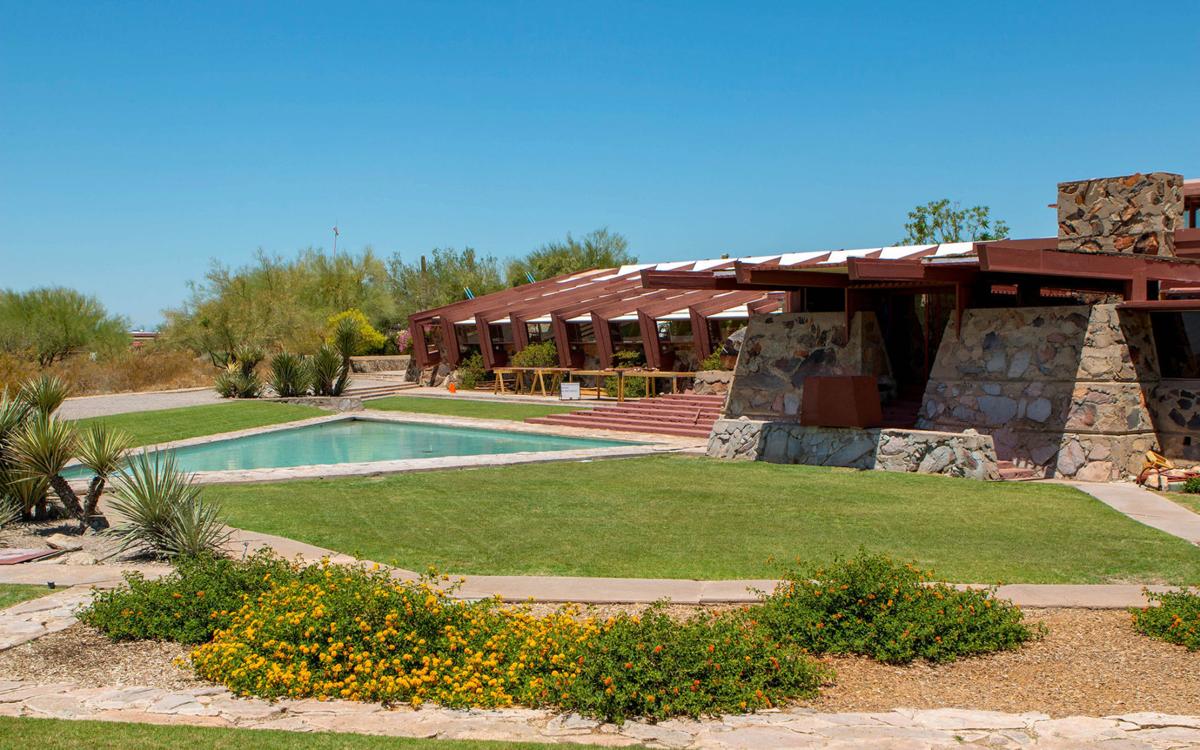 Frank Lloyd Wright’s Taliesin West in Scottsdale was established in 1937. It was designed as the architect’s winter home, and today houses the Frank Lloyd Wright Foundation and The School of Architecture at Taliesen. (Photo by Elly Lundberg/Cronkite News) 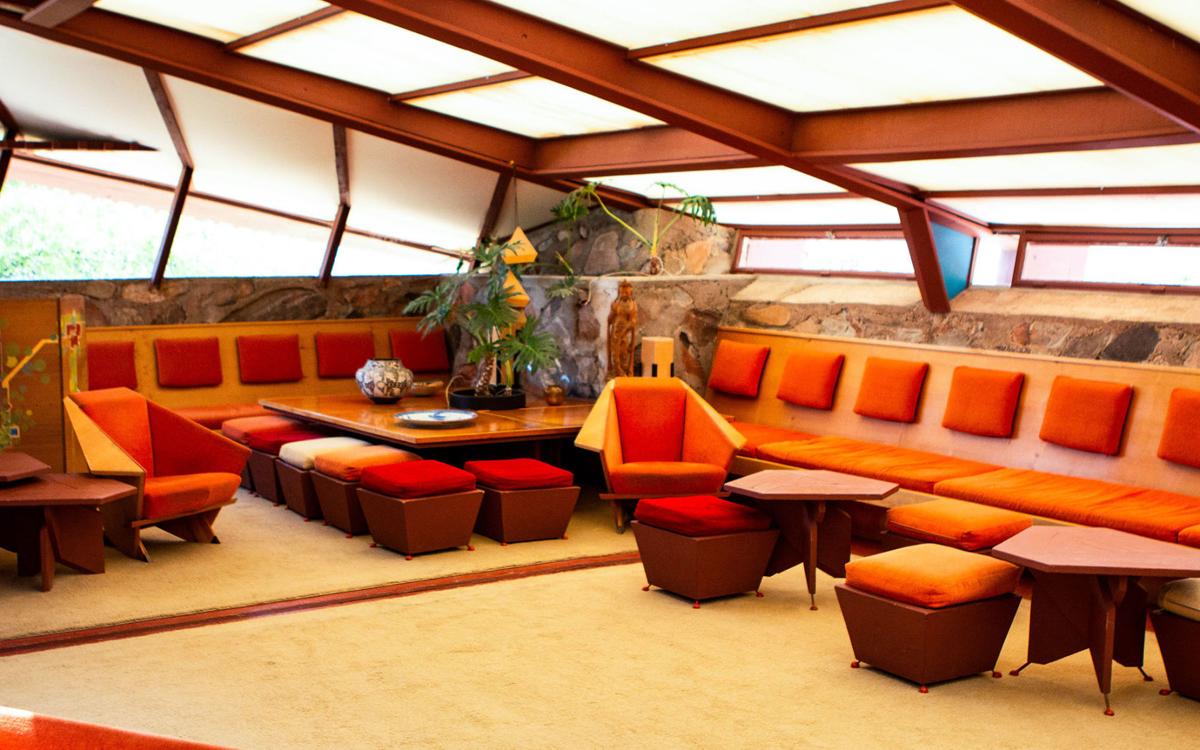 The “Garden Room” was designed to serve as Wright and his wife’s personal living room and was his favorite room on the property. It’s design was influenced by Japanese architecture. (Photo by Elly Lundberg/Cronkite News)

SCOTTSDALE — The slanted roofs of Taliesin West mimic nearby ridgelines in the foothills of the McDowell Mountains. Its massive stone walls, long and low-slung, almost blend into the surrounding desert.

Legendary American architect Frank Lloyd Wright began construction on Taliesin West, meant to be his winter home, in 1937. His vision was to create a structure that reflected the expansiveness of the Sonoran Desert.

Eight decades later, the complex and seven other landmarks designed by Wright have been designated UNESCO World Heritage Sites. The designation, which was announced July 7 during a ceremony in Azerbaijan, places the collection of Wright buildings alongside the Great Wall of China, the Pyramid Fields of Giza, the Taj Mahal, the ruins of Pompeii and other sites that are “irreplaceable sources of life and inspiration” for the whole world and must be protected for future generations, UNESCO said.

On a practical note, the designation might boost tourism at Taliesin West and generate more funding to preserve the 380 Wright-designed buildings that are still standing.

In addition to Taliesin West, UNESCO recognized Taliesin, its sister site in Wisconsin, and six other Wright buildings in the U.S., including the Solomon R. Guggenheim Museum in New York, Fallingwater in Pennsylvania and the Hollyhock House in Los Angeles. The Taliesin campuses together make up the School of Architecture at Taliesin.

UNESCO cited Wright’s use of organic architecture and his focus on building “for an American context,” which ended up having an appeal outside the U.S. as well, as some of the reasons behind the decision.

“(Wright) was creating a new kind of architecture, something that responded to modern life,” Prozzillo said. “The (designated) works are all over the 20th century. Wright was responding to a change … from the 1800s to the 1900s, and he was trying to develop an architecture that met those modern needs.”

Christopher Gritzmacher, a Taliesin graduate and architect and planner with CCBG Architects in Phoenix, said he’s proud to see Wright’s works added to the UNESCO list.

“I thought (the listing) was great because it brings with it a lot more overt recognition,” Gritzmacher said. “I think a lot of people knew about Wright and believe that he’s a big thing, but this does finally, for lack of a better term, canonize his contributions to the history of architecture, especially in America.”

Wright was also responsible for the design of the Harold Price Sr. House and Arizona State University’s Grady Gammage Memorial Auditorium, and he helped draft pieces of the Arizona Biltmore, which was designed by a former student.

The Taliesin locations were Wright’s personal homes – Taliesin in the summer, Taliesin West in the winter – and still serve as campuses for the architecture school. Prozzillo said they were the first of Wright’s structures to be nominated for the UNESCO list in the 1980s, but the World Heritage Committee recommended the nomination be revised to include more of Wright’s influential works.

“They referred the nomination back to the United States and asked to compile a larger list of Wright’s sites so that we could get a better representation of his innovative work,” Prozzillo said. “That took a number of years, working on the Wright sites to nominate.”

It took more than 15 years of collaboration between the sites, scholars and the Frank Lloyd Wright Building Conservancy before the final nomination was submitted in November 2018.

Ashley Wilson, the Graham Gund Architect for the Historic Sites at the National Trust for Historic Preservation, said Taliesin West stands out even among Wright’s unique structures because he built it alongside apprentices who later were taught inside it. She said Wright had a “cult-like following” of apprentices who revered him and were eager to learn under his watch.

“You’re not necessarily looking at a masterpiece of perfect architecture,” Wilson said. “You’re looking at a place where, over 20 years, he fiddled and he invested in the landscaping, invested in a building type and he worked with students. It’s a place that you really understand the person as an architect; his ideas, his design, the place of experimentation.”

When you enter Taliesin West and walk through the narrow, dark hallways, it feels like descending into a stone bunker, but the space explodes into sunlight and warm red-orange hues where halls connect with grand, open rooms adorned with a mix of Asian- and Native American-inspired decor.

Wright’s favorite color, a chalky terra cotta hue he dubbed Cherokee Red, can be found extensively in almost every room.

Taliesin West houses Wright’s personal living spaces, a drafting room for students, a full kitchen, a large theater and a smaller cabaret, among a mishmash of other rooms. Fountains bubble gently outside. A metal statue of a fire-spitting dragon stands guard near a small film-viewing room off of the main structure.

Prozzillo said Wright was deeply inspired by the desert, so different from his home state of Wisconsin, after visiting in the 1920s to help with the Arizona Biltmore. Wright incorporated desert landscape and biology into every aspect of Taliesin West. Stone and sand were collected in the desert. The decorative pools, which also provided water to fight fires before Scottsdale annexed the site, are filled with water pumped from a well Wright dug on site. Even the support beams in the ceilings are meant to mimic the ribs of a saguaro cactus, Prozzillo said.

It was hot Monday afternoon when Munds Park resident Kami Ramsgate found herself spending her day off waiting in line in downtown Flagstaff.

Arson cases spike in city of Flagstaff during fire ban

In the past two weeks, six cases of arson have been reported to the Flagstaff Police Department across the city.

Frank Lloyd Wright’s Taliesin West in Scottsdale was established in 1937. It was designed as the architect’s winter home, and today houses the Frank Lloyd Wright Foundation and The School of Architecture at Taliesen. (Photo by Elly Lundberg/Cronkite News)

The “Garden Room” was designed to serve as Wright and his wife’s personal living room and was his favorite room on the property. It’s design was influenced by Japanese architecture. (Photo by Elly Lundberg/Cronkite News)