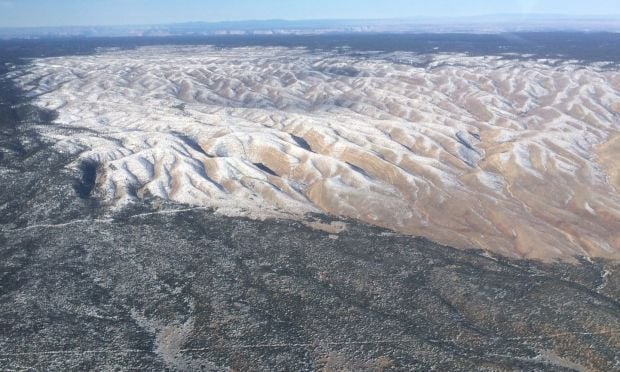 The east side of the Kaibab Plateau, as seen by the air, is part of the proposed Grand Canyon Watershed National Monument. 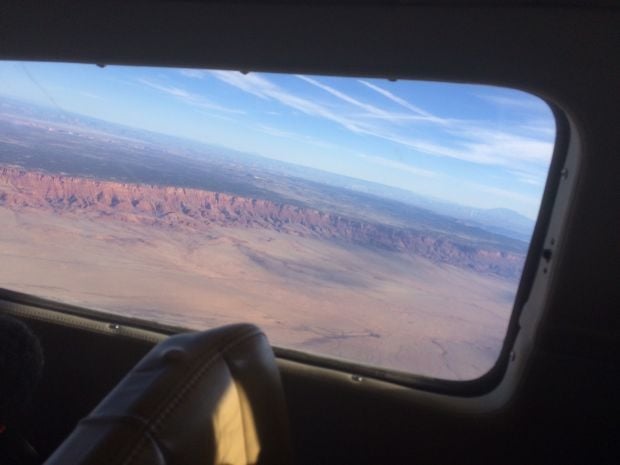 The view out the window of an overflight of the new proposed Grand Canyon Watershed National Monument shows Vermilions Cliffs and the land that reaches out from it. By Seth Muller/Arizona Daily Sun 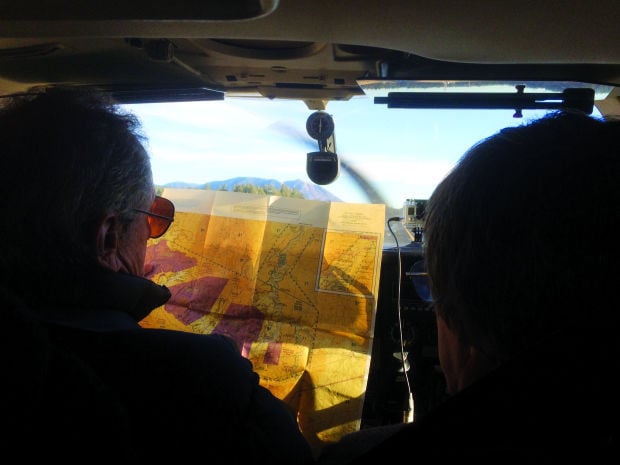 Bruce Gordon and Kim Crumbo study the aerial map of the proposed national monument area before takeoff during an overflight. By Seth Muller/Arizona Daily Sun 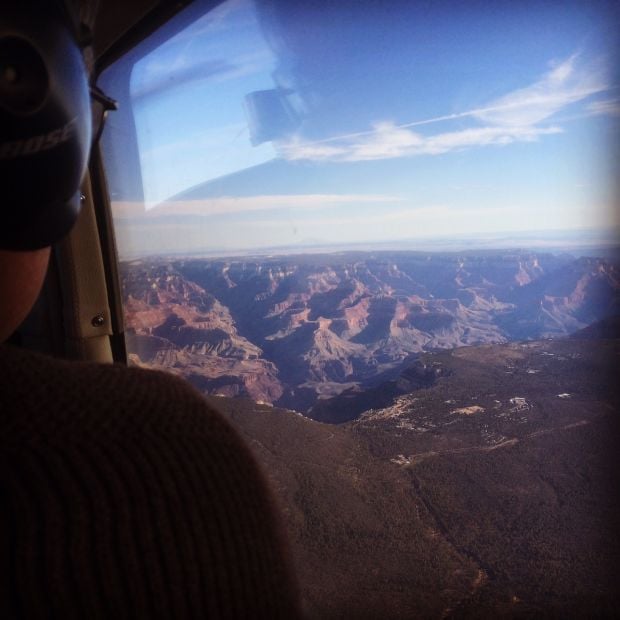 Kim Crumbo looks out of the window of the plane during an overflight tour of a new proposed national monument. By Seth Muller/Arizona Daily Sun

The power of the drive is undeniable. The scenic route of 89A breaks from U.S. 89. It winds its way to Lees Ferry and crosses the Colorado River at Navajo Bridge. From there, the road skirts along the edge of the Vermilion Cliffs to the north and a rolling valley that spreads to the south and is carved with drainages on their way to Marble Canyon.

Ahead to the west is the Kaibab Plateau. The highway vaults its flank on switchback after switchback and lifts from the valley floor into a piñon-juniper forest. Those trees give ground to ponderosa pines — some of which are old growth. They share the elevated landscape with aspen, fir and spruce trees.

At Jacob Lake, the highway reaches the Route 67 junction. It is the spur road that leads to the North Rim. Dense forest gives way to open meadows with sinkhole ponds. Deer, bison and turkey often walk the edges of the meadows. It feels like no other location in Arizona.

The special characteristics and value of this place in the greater Grand Canyon region has led groups to advocate for this parcel — to the south of Vermilion Cliffs, up onto the Kaibab Plateau and on to Kanab Creek — to become part of a 1.7 million-acre national monument.

If the monument was designated as proposed, it also would join a section south of the South Rim that would include Red Butte and the surrounding lands. Kim Crumbo, conservation director for Grand Canyon Wildlands Council, explained that the thrust of the proposal is to protect, in the long-term, the land from mining while also creating better protection for the old-growth forest that remains on the Kaibab Plateau.

“This is the last big chunk of old-growth ponderosa pine forest outside of protection in the Southwest,” Crumbo said. “With that, we have a chance to restore natural fire on the plateau.”

The monument idea has been around for a couple of years, and it’s being advocated by the Wildlands Council, the Sierra Club and the Center for Biological Diversity. Longtime critics -- if not outright opponents --  include U.S. Rep. Paul Gosar, R-Prescott, and the Arizona Game and Fish Commission.

But it recently picked up a major boost when U.S. representatives Ann Kirkpatrick, Raul Grijalva and Ruben Gallego, Arizona Democrats, sent a letter to the Obama Administration calling for the establishment of this new monument.

The intent is to have President Obama protect the land through a designation, much in the way President Clinton signed for several national monuments in Arizona and the Southwest, including the nearby Vermilion Cliffs and, farther to the west, Grand Canyon-Parashant National Monument.

In a joint release, the three members of Congress shared, “the Arizona representatives asked the president to use his authority under the Antiquities Act to establish the national monument. This action would ‘not only protect ancient forests, corridors for migratory wildlife and thousands of archeological sites, it will also support clean drinking water, cultural heritage and recreation.’”

They added, “South of the Grand Canyon, the Coconino Plateau contains deep groundwater that supplies life-giving seeps and springs. This area is also culturally rich and contains sites, including Red Butte, that are special and sacred to Native American tribes.”

The growing support aside, the proposed monument has raised concerns from the Arizona Game and Fish Department Commission. A release from Game and Fish noted, “The commission expressed concern that the proposed monument was to ‘preserve’ and in some cases lock away these lands rather than conserve them. National monument designation could impose unreasonable restrictions greater than what is actually needed to protect the resource, adversely impacting public access, traditional recreational uses and the ability of the commission and department to properly manage wildlife and habitat.”

The Game and Fish Commission raised the issue of public input, as well. “The commission also expressed concern that a presidential executive order to create the monument would require no process for public input or participation from communities that would be directly impacted by this proclamation,” the department shared in a recent release.

On Monday, I accepted an invitation to fly with the nonprofit organization EcoFlight, which sponsored an aerial trip over the monument to give a sense of the landscape and how connected it is to the Grand Canyon and other adjacent protected lands. Pilot Bruce Gordon uses his Cessna 210 Centurian as a way to get a 10,000-plus-foot view of the landscape for proposed monuments, mining developments and other land issues.

The flight included Crumbo, Gordon, photographer Kristen M. Caldon, filmmaker Ed George and Grand Canyon artist and advocate Bruce Aiken. “When it comes to getting the aerial view of the land and understanding it, it’s all about watersheds when you think about it,” Gordon said.

And flying proved a good way to go. This proposed national monument is significant in scope and not so easy to take completely in on the ground. It covers around 1.7 million acres — only somewhat smaller than the sprawling Grand Staircase-Escalante at 1.88 million — and includes that southern parcel with Red Butte.

After circling Red Butte, we headed over to the Dragon Corridor flight path to head over the Grand Canyon. We all watched out the window as the green lip of the canyon’s edge fell away into the wonder of the chasm.

We passed over the snow-laden forests and meadows of the Kaibab Plateau. The signs of water and its flows were everywhere below us. Beyond the table lands, we flew over the eastern edge of the Kaibab Plateau and all we saw how water carves back into the plateau, creating prominent rises and curves, highlighted by a fading snowline.

It was easy to understand how the watershed name was attached to the proposal, given all the signs of water and how connected the drainages are to the Grand Canyon as a greater whole. Crumbo also noted the importance of the wildlife connectivity with the land below us.

“When that wolf was spotted up on the North Rim, we knew that it had come down along the Paunsaugunt Corridor down from Utah,” said Crumbo, in reference to the female gray wolf sighted near the North Rim of the Grand Canyon this past fall. The endangered wolf was shot and killed in Utah in December. “That (wolf sighting) showed a strong sense of the wildlife corridor we have through here.”

A monument designation, which brings a notable layer of federal protection to the landscape, would also guard the land against mining. This becomes crucial to protect the springs that feed the canyon—particularly ones like Roaring Springs. It happens to provide the water for the nearly five million visitors to the Grand Canyon each year.

Of particular concern with environmental groups is the uranium mining. Recently, a 20-year ban on uranium mining was introduced by the Obama Administration. But the ban has been appealed by the mining industry in the courts and has headed to the U.S. 9th Circuit Court of Appeals, where it awaits a ruling. A monument designation would take mining off the table, according to the environmental groups and canyon advocates who support it.

For the environmental groups and other advocates of the Grand Canyon Watershed National Monument proposal, this and next year remain vitally important to rally for the creation. President Obama leaves office at the end of 2016, and the hope is to have him designate the national monument before he exits and the political landscape possibly changes.

What started as routine wildlife assistance took an extraterrestrial turn for Utah's Department of Public Safety after officers stumbled upon a mysterious monolith. Watch here.

The east side of the Kaibab Plateau, as seen by the air, is part of the proposed Grand Canyon Watershed National Monument.

The view out the window of an overflight of the new proposed Grand Canyon Watershed National Monument shows Vermilions Cliffs and the land that reaches out from it. By Seth Muller/Arizona Daily Sun

Bruce Gordon and Kim Crumbo study the aerial map of the proposed national monument area before takeoff during an overflight. By Seth Muller/Arizona Daily Sun

Kim Crumbo looks out of the window of the plane during an overflight tour of a new proposed national monument. By Seth Muller/Arizona Daily Sun