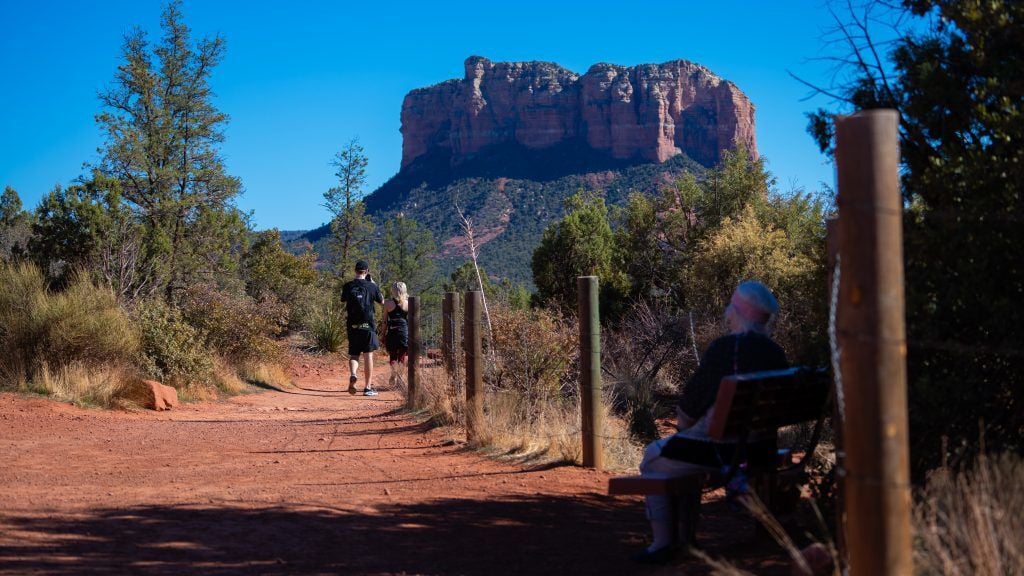 The most popular hiking trails in the Sedona area have been particularly littered over the past year, locals say. 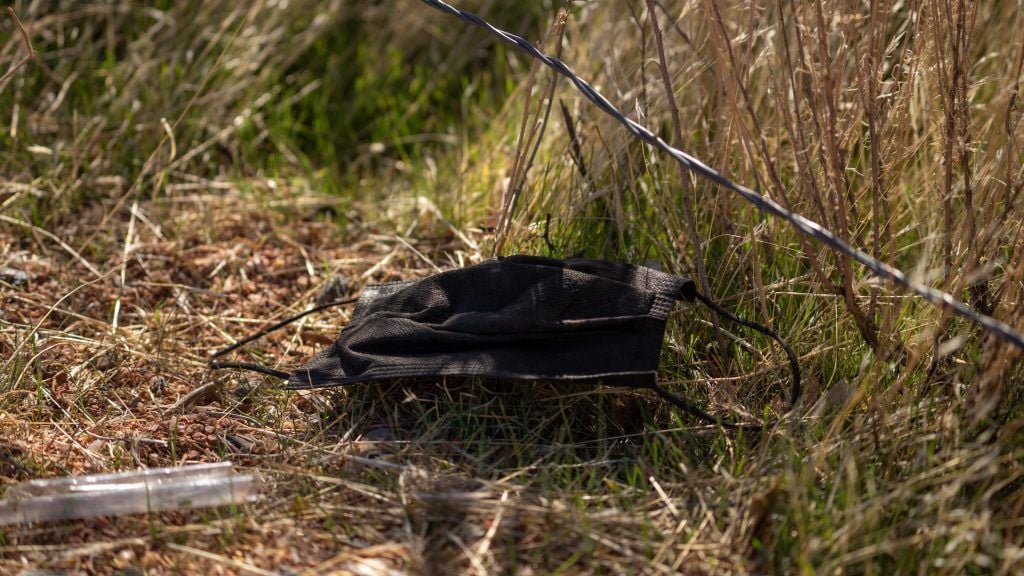 Face masks can take hundreds of years to decompose, say environmentalists, who note that widespread use of such personal protective equipment only began a year ago.

Face masks, plastic bottles and bags — and feces, both dog and human — are some of the unsightly waste you could encounter these days while hiking in the red rocks of Sedona. Discarded masks also litter the beaches of Southern California, which already were battling a growing scourge of plastic and microplastics in the ocean.

Environmentalists fear the situation will get worse as the nation emerges from a year of pandemic restrictions.

With Americans unable to pursue many of the activities they enjoyed before COVID-19 emerged last year, scenic spots across the Southwest have offered a respite and a safer form of entertainment courtesy of the great outdoors. Many natural spots in Arizona were considered essential services during the state’s stay-at-home order, leading to packed hiking trails and facilities. In California, many beaches were closed during the peak summer tourism season but have since reopened, leading to crowds.

The downside of that influx of visitors is increased litter on beaches from San Diego to Malibu, and in favorite Arizona spots like Sedona and Oak Creek Canyon.

Keep Sedona Beautiful Inc., which started in 1972 to protect and sustain the area’s unique environment, has done its best to curb litter with a combination of education, advocacy and litter lifts.

Carla Williams, the nonprofit’s executive vice president, has noticed an uptick in people traveling to Sedona and has seen a major increase in day-trippers and overall travel to red rock country during the pandemic.

“The parking lots are certainly full during the pandemic and have been busier than I’ve ever seen,” she said. “It’s been like a zoo on some weekends.”

Cathedral Rock, which features perhaps the most popular hiking trail in the area, has been particularly littered, Williams said.

“I noticed on Cathedral Rock Trail during last summer there were a lot more garbage, bottles, cans, which I hadn’t really seen before on trails,” she said. “Normally, it’s rare to see feces on real popular trails, but people were going to the bathroom out there more frequently than normal.”

The group has been doing all it can to remove garbage and maintain the natural beauty at one of Arizona’s most popular tourist attractions.

“We want visitors and residents to feel like there’s a place in this area where they don’t have to look at piles and piles of litter,” Williams said.

The Arizona Department of Tourism says 48.6 million people visited the state in 2019, the most recent year not affected by COVID-19.

The state’s crown jewel and biggest tourism attraction, the Grand Canyon, hasn’t seen quite as much tourism in recent months, with snow and COVID-19 closing parts of it. As the weather warms and summer travel picks up, Grand Canyon and other national parks could face similar challenges with crowds.

The Arizona Department of Environmental Quality, whose mission is “To protect and enhance public health and the environment,” created an app to help Arizonans document the trash they find in and around popular nature areas.

“They can pick up trash kind of by any stream or lake, and kind of let us know what they found and take pictures, and then send that data to us,” said Meghan Smart, the department’s environmental senior scientist/citizen science coordinator. “We have lots of people around Arizona hiking, and this would just be an easy way to kind of help Arizona.”

Smart said ADEQ removed more than 8,000 pounds of trash from natural areas in 2020, which is the first year they’ve measured it.

A major goal of the department has been disposing of feces near streams and lakes, which can leak into water bodies and infect swimmers with E.coli, an intestinal bacterium.

“We asked people to find toilet paper and pit toilets, because what we’re trying to do is protect people from swimming with high E.coli levels,” Smart said. “Our volunteers are amazing because they are picking up toilet paper with trash grabbers and they are moving E.coli sources away from the stream to protect it.”

The persistent problem of plastic

Plastic pollution has befouled nature for decades, but it’s particularly dire in the world’s oceans and along its beaches. From San Diego to Santa Barbara, Southern California’s coastal towns have seen a surge in visitors, particularly during holiday weekends, resulting in more discarded plastic. Some beach cities, including Huntington Beach, which calls itself Surf City, also saw protests against masks and stay-at-home orders. In a normal year, California beaches attract more than 100 million people.

Oceansasia.org, based in Hong Kong, has been focused on marine plastic pollution and its effect on its wildlife and ecosystems – which Teale Bondaroff, director of research, called a much larger issue than most people realize.

“Because it’s microplastic and small, I think that we as humans don’t appreciate the sheer amount of plastic waste we’re putting into the environment,” he said.

An estimated 8 million metric tons of plastic entered the ocean during 2018, but with the spread of COVID-19 around the world, a relatively new item has been wreaking havoc on oceans: face masks, gloves and other personal protective equipment.

Bondaroff authored a study that estimated that 1.56 billion masks entered oceans in 2020. The study found it can take up to 450 years for masks to break down, slowly turning into microplastics.

Microplastics can affect such marine wildlife as turtles, seabirds and fish in a number of ways, Bondaroff said.

“It can poison them, it can impair their reproduction and weaken them making them more susceptible to disease and predation,” he said.

Bondaroff also noted that microplastics can go from the ocean floor into the stomachs of fish and eventually onto our dinner table.

“They were only recently introduced, but they already ranked as the 12th most picked-up item that we removed during Coastal Cleanup month last September, which is remarkable for something that’s only recently been introduced really in a large way to our society,” Schwartz said.

Plastic on the coast

During coastal cleanups, he said, the group picks up tons of items, mostly single-use plastic items.

“Take a convenience store, rip it up on the inside and shake and everything that falls out is what we’re picking up,” Schwartz said. “There are durable reusable replacements for almost every single item in the top 10 that we collect every year that people can be using in place of those single-use disposable plastic products.”

The best way to stop the degradation of oceans by plastics is to eliminate single-use plastics completely, he said.

“They can’t become plastic pollution if they don’t get issued in the first place,” Schwartz said.

Bondaroff said the issue of dealing with plastic pollution in the ocean is multifaceted, and the influx of masks is just another issue that will continue to plague the Earth’s oceans and the wildlife that lives in them.

Man's body pulled out of a canal in Scottsdale; No ID yet

CARSON CITY, Nev. — Farmers, environmentalists and small-town business owners gathered at the Hoover Dam on Thursday to call for a moratorium …

Hiking trails on Piestewa, Camelback will close during extreme heat

PHOENIX – Several of the most popular hiking trails in metro Phoenix, including both trails on Camelback Mountain and those around Piestewa Pe…

Arizona venues get $45 million in COVID relief, but many still waiting

WASHINGTON -- Federal officials have awarded $45.3 million in COVID-19 relief funds to 68 Arizona concert venues, a vast improvement over the …

FLAGSTAFF, Ariz. (AP) — One person who went missing from a Colorado River rafting trip in the Grand Canyon during a flash flood was found dead…

PHOENIX (AP) — Police are investigating the shooting death of 17-year-old girl who was found in a car in a south Phoenix alley.

TUCSON, Ariz. (AP) — Authorities on Monday identified a suspect accused of fatally shooting one person and wounding four others, including fir…

FLAGSTAFF — A new kind of broadband internet is coming to Tuba City on the Navajo Nation, one beamed down from space by so-called “satellite c…

The most popular hiking trails in the Sedona area have been particularly littered over the past year, locals say.

Face masks can take hundreds of years to decompose, say environmentalists, who note that widespread use of such personal protective equipment only began a year ago.