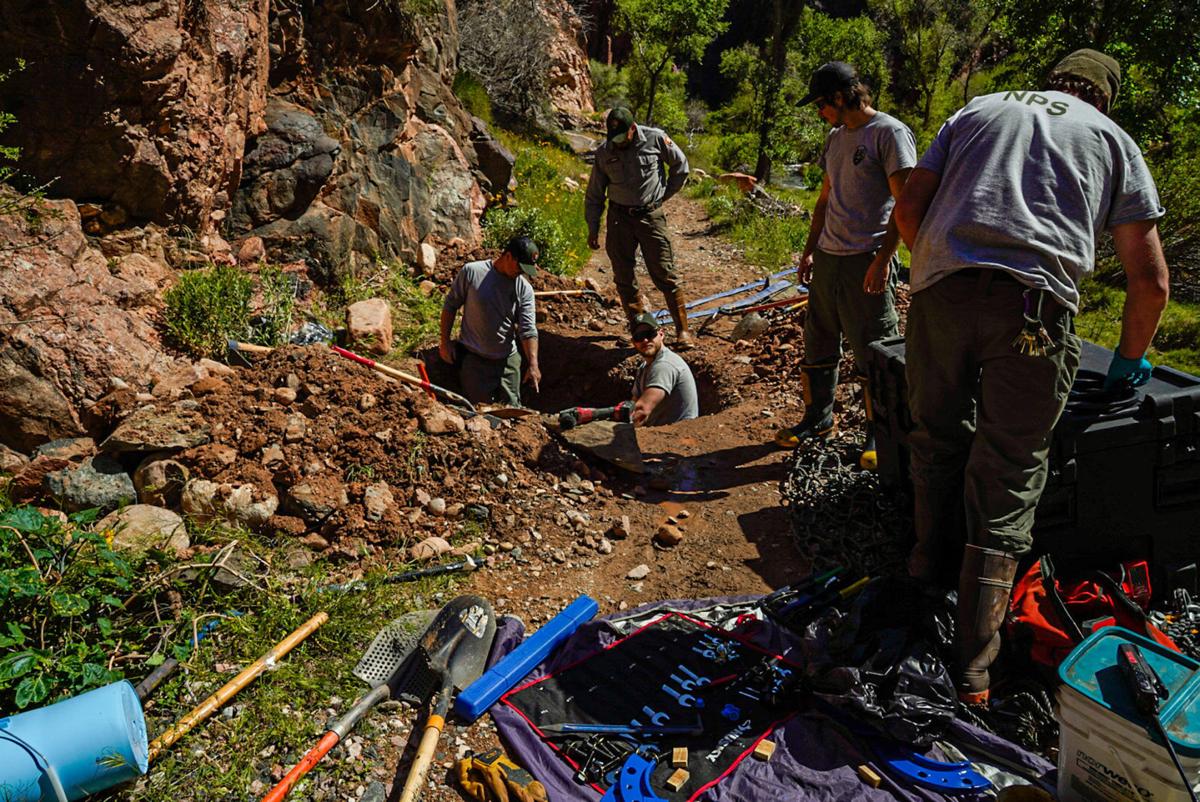 A water utilities crew works to repair a broken section of the Transcanyon Pipeline in Grand Canyon National Park in early 2020. Grand Canyon projects will get more than $60 million for repairs in the first two years of the Great American Outdoors Act. 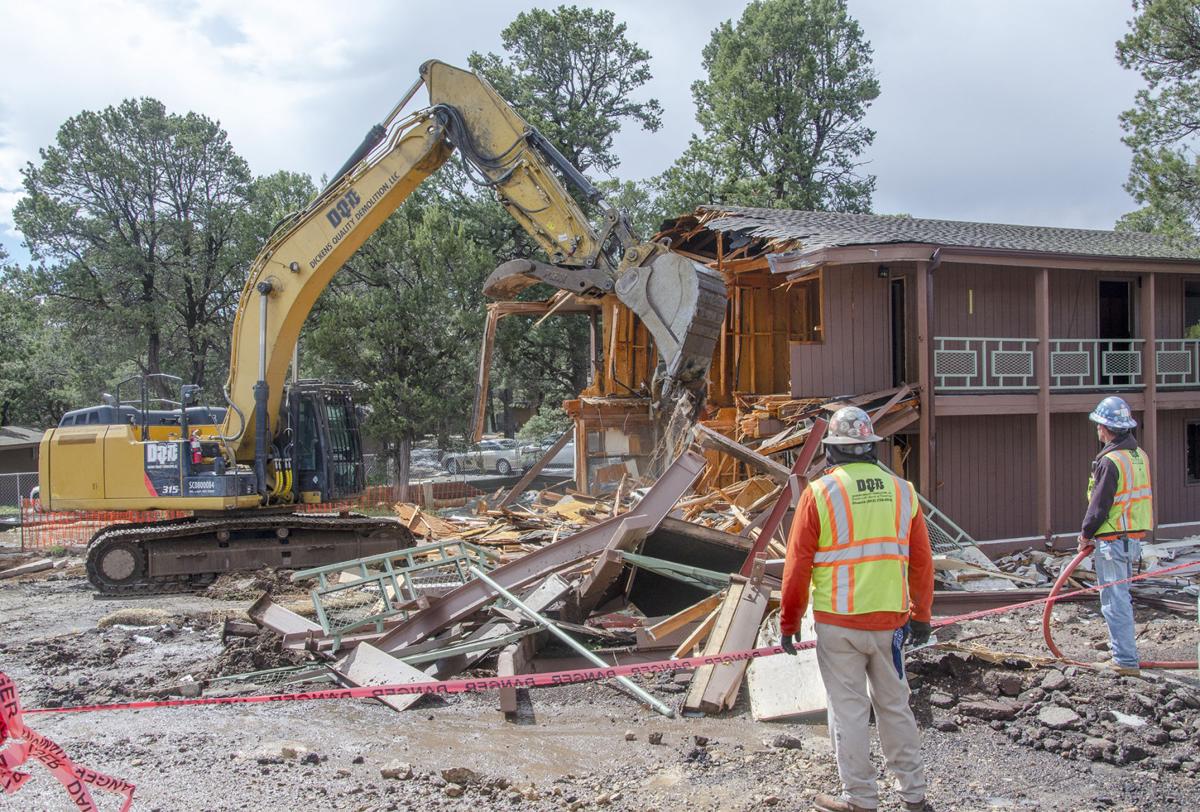 Crews demolish the last of six buildings in this 2019 file photo, to make way for a new Maswik South lodging at the Grand Canyon National Park. Despite an infusion of new funds, the park has more than $300 million in deferred maintenance.

WASHINGTON — Arizona projects got $110 million last year and will get another $159 million in the fiscal year that started this month, or more than 9% of all funding nationally under the Great American Outdoors Act for those two years.

The money, dedicated largely to national parks but also to federal lands and tribal schools, has been welcomed by tourism and environmental groups, who said it is long overdue.

“The National Park Service has been underfunded over the years,” said Kevin Dahl, senior program manager for Arizona in the National Parks Conservation Association’s Southwest region.

“These are our jewels, and with visitation and with normal wear and tear, there’s a lot of buildings, a lot of roads, trails, etc. and those all need regular maintenance,” he said. “When you don’t maintain them over time, the backlog of maintenance becomes pretty high.”

For national parks, the backlog of deferred maintenance totaled $11.9 billion in 2018, according to data from the National Park Service. More than $507.4 million of that was for projects in Arizona, with $313.8 million needed in the Grand Canyon National Park alone.

Joe Galli, senior adviser in public policy at the Greater Flagstaff Chamber of Commerce, said the funding is critical to not just the park, but the region.

“It’s very good for improving facilities and maintenance, and enhancing the visitors’ experience, those things are critical to the lifeblood of visitation in Arizona which is a critical component of our economy,” he said.

National parks funding is just one element of the Great American Outdoors Act, which took effect last year. The act, which is permanently funded with revenues from offshore oil and gas leases, is expected to eventually provide up to $1.9 billion a year.

The act is designed to fund projects that “provide needed maintenance for critical facilities and infrastructure.” It calls for 70% of that funding to go to the National Park Service, 15% to the U.S. Forest Service, and 5% each to the U.S. Fish and Wildlife Service, the Bureau of Land Management and the Bureau of Indian Education.

Of the $89.6 million allocated to Bureau of Indian Education projects in fiscal 2021, $85.4 million went to schools in Arizona or on the Navajo Nation. In fiscal 2022, the state is scheduled to get $56 million of the $89.5 million total for schools.

Funding for national park projects in the state will climb steeply, from $20.2 million for the Grand Canyon’s historic powerhouse last year to almost $82 million in fiscal 2022, that will go to projects at the Grand Canyon, the Petrified Forest National Park and the Organ Pipe Cactus National Monument.

“The wastewater treatment center is really important because up to 6 million people visit the South Rim of the Grand Canyon, and it’s a really small town that lives there to serve that,” Dahl said of one project for the coming year.

“At the Petrified Forest, the visitor center that was built in the ’60s and needs maintenance to bring it back up to speed with current requirements for public buildings,” he added.

Those projects, along with others coming in the next three years, will help the parks get back to pre-pandemic visitor numbers, he said. Not only will it let the National Park Service catch up on much-needed repair, it will also show the parks in their best light, for U.S. and foreign visitors, an important source of revenue.

“Before the pandemic, in the West, up to half the visitors are from foreign countries, and outdated dysfunctional toilets does not show America in the best of lights,” Dahl said. “If you put things off, they get worse, so it’s great that the GAOA is helping us catch up with this really needed repair.”

Rains and the emptying of a dam cause flooding in Thailand

Rains and the emptying of a dam cause flooding in Thailand

Colin Powell, former general and secretary of state, dead at 84

Colin Powell, former general and secretary of state, dead at 84

FLAGSTAFF — Indigenous people across the United States marked Monday with celebrations of their heritage, education campaigns and a push for t…

Robocalls dip as FCC rules kick in; advocates say more should be done

Robocalls to Arizonans dropped by more than 3 million in July, to about 84.4 million for the month, as the first phase of a new federal mandat…

PHOENIX – In a South Phoenix neighborhood of light colored townhomes and neat little front lawns, some of the roads are coated in a light gray…

Experts: No short-term answers to problem of drought, water shortages

PHOENIX (AP) — A metro Phoenix sheriff's deputy who suffered grave injuries at the hands of a man he had just arrested died Monday, authorities said.

Feds agree to keep cattle out of northern Arizona rivers

A water utilities crew works to repair a broken section of the Transcanyon Pipeline in Grand Canyon National Park in early 2020. Grand Canyon projects will get more than $60 million for repairs in the first two years of the Great American Outdoors Act.

Crews demolish the last of six buildings in this 2019 file photo, to make way for a new Maswik South lodging at the Grand Canyon National Park. Despite an infusion of new funds, the park has more than $300 million in deferred maintenance.