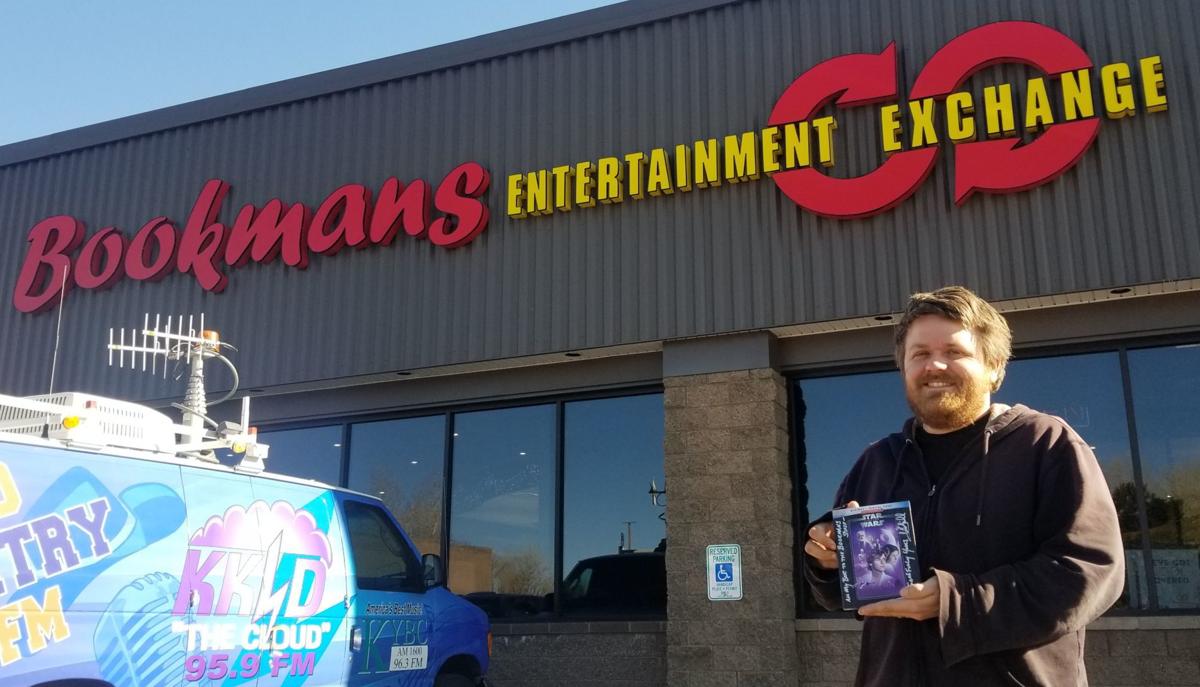 Micheil Salmons, general manager of Flagstaff's Bookmans Entertainment Exchange, stands in front of the store holding the DVD signed by Star Wars actor Mark Hamill. Hamill traded the signed DVD in exchange for a vinyl Bookmans had found that Hamill had lost in the early 1990s. 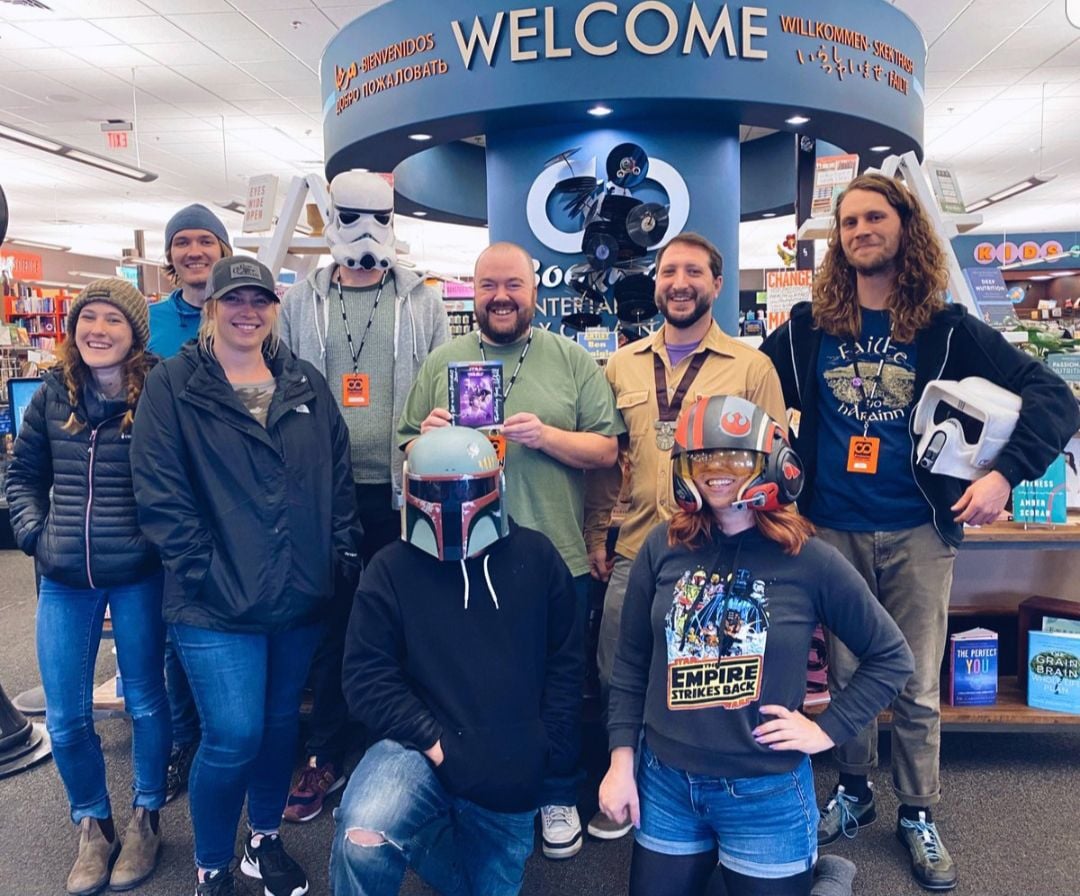 Staff at the Flagstaff Bookmans. 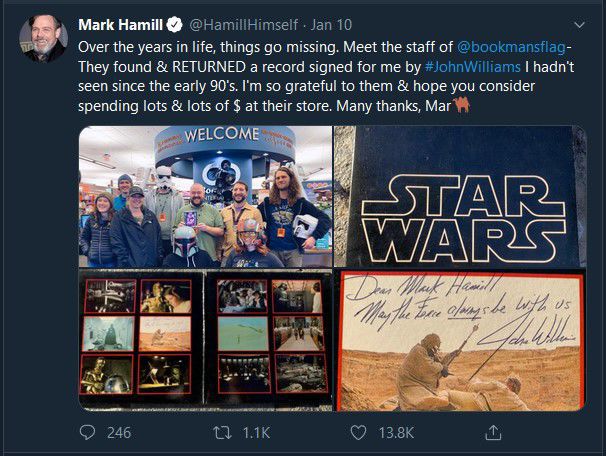 Mark Hamill, known to millions as Luke Skywalker from the Star Wars franchise, recently spotlighted Flagstaff’s Bookmans Entertainment Exchange after the business reunited the actor with a one-of-a-kind piece of Star Wars memorabilia.

Bookmans is an Arizona-based chain that specializes in reselling books, movies, video games, records, trinkets and board games that its customers can trade in for cash or in-store credit.

The special item was an original 1977 soundtrack on vinyl from "Star Wars: A New Hope." This version was in great condition and stamped “not meant for distribution,” which would have been worth plenty of money on its own, said Bookmans general manager Micheil Salmons. But what made the record special to Star Wars fans and Hamill alike: the score’s legendary composer John Williams signed the record and addressed it to Hamill.

“Dear Mark Hamill, May the force always be with us, John Williams,” Williams wrote on the vinyl's sleeve.

After retrieving the record, Hamill used his Twitter account to endorse Flagstaff’s Bookmans, saying he hadn’t seen the record since the early 1990s. The original tweet has been retweeted 1,400 times and liked more than 16,300 times as of Monday.

“I’m so grateful to them & hope you consider spending lots & lots of $ at their store,” Hamill wrote on Twitter.

Lost in a galaxy far, far away

The record was first turned in to Bookmans by a customer in 2018, Salmons said. The customer was a woman whose father had died and left behind a storage unit filled with a now-unwanted collection of Star Wars memorabilia.

Salmons and their staff went to work to verify the signature on the record, a common practice as they often get allegedly signed copies of books, movies and other items. For example, he said Flagstaff’s Bookmans has had first-edition books signed by Dr. Seuss, limited edition almanacs signed by Norman Rockwell and comic books signed by famous Game of Thrones author George R. R. Martin.

But despite the Bookmans staff’s expertise in spotting fakes, the staff could not decide whether the signature was real.

“If it was authentic, it could be worth a lot. If it isn’t, it isn’t,” Salmons said. “This lady — the quantity she had brought in, and based on the signature, how it was written, that it wasn’t printed on there, I personally was 100% convinced that it was an authentic signature.”

If it was authentic, they were going to sell it for $499.50. Salmons said they arrived at that number after comparing the range of prices it was selling for on the internet, and felt the price was honest.

“I try to tell employees, be honest with people, give them fair and honest offers,” Salmons said. “With this lady, she was just trying to unload everything. It was a gamble for us."

Without being able to determine the authenticity of the item, the signed record sat in the back of the store, unable to be sold. Meanwhile, Salmons, a vehement Star Wars fan, said he continued to hold onto hope.

The force of fandom

Salmons met his wife through Bookmans, and he has worked there for 12 years. The two of them got Star Wars tattoos together — opposing symbols representing the light and the dark sides of the Force.

Salmons said he and his father bonded over Star Wars when he was a child. Like his father before him, he hoped to foster that same relationship with his son.

“I met my wife here; she worked here for 15 years. We got married and had a son and bought a house and everything,” Salmons said. “Even before he was born, I started buying Star Wars toys in anticipation of having a child in the hope we’d be playing with these toys.”

When one of the employees who oversees Bookmans’ growing records department recently found the signed record, he suggested they reach out to Hamill. Beyond the Star Wars saga, Hamill has become known for his voice acting, such as Batman’s nemesis Joker in many video games and TV shows.

When asked on Twitter by the Arizona Daily Sun about having the record returned to him, Hamill responded and said he was impressed by Bookmans' action.

He added the hashtag “#FlagstaffRULES!!!!”

“[The experience felt] Totally unexpected & positively surreal. It was nice to get it back, but even more impressive that [Flagstaff’s Bookmans] would go to the trouble of returning it, when they could have just as easily SOLD it!” Hamill wrote.

As a master of exchanges, Salmons traded the record for a signed DVD of "Star Wars: A New Hope." Another Bookmans employee also sent over a replica of the medals given to Luke Skywalker and Han Solo — but not Chewbacca on screen — at the end of "A New Hope" to be signed as well.

Salmons said they will keep the DVD in a safe place, to save it as a cherished memory.

"All my best to the Bookmans staff," Hamill wrote in silver marker.

The general manager said he was happy to help return a lost record to Hamill, and is excited that he had the opportunity to interact with an icon of the Star Wars saga.

“It was huge, honestly,” Salmons said. "I never thought I would ever be a thought in Mark Hamill’s mind, y'know? I never thought he would think of my name, ever, once.”

“[The experience felt] Totally unexpected & positively surreal. It was nice to get it back, but even more impressive that [Flagstaff’s Bookmans] would go to the trouble of returning it, when they could have just as easily SOLD it!”

A local guide to last-minute gifts

So you waited until the last minute to do your holiday shopping. That’s all right—we’re still working on ours, too. Shopping for friends, fami…

See the tapes that could unravel a controversial mine project

See the tapes that could unravel a controversial mine project

WATCH: Biden says he will stop deportations in the first 100 days of presidency | Noticias Telemundo

WATCH: Biden says he will stop deportations in the first 100 days of presidency | Noticias Telemundo

Micheil Salmons, general manager of Flagstaff's Bookmans Entertainment Exchange, stands in front of the store holding the DVD signed by Star Wars actor Mark Hamill. Hamill traded the signed DVD in exchange for a vinyl Bookmans had found that Hamill had lost in the early 1990s.

Staff at the Flagstaff Bookmans.