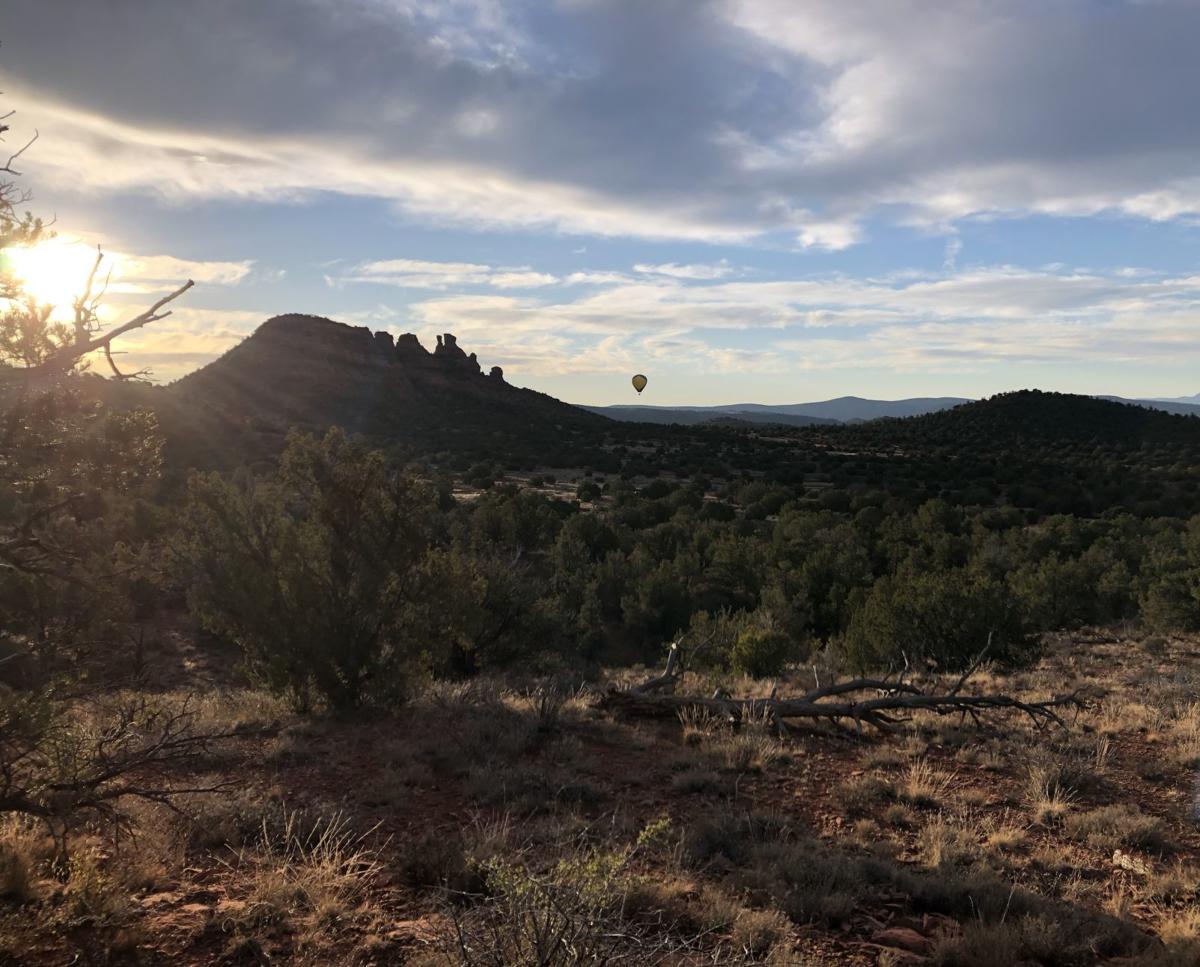 As the sun rises over the famous red-rock formation, the Cockscombs, a lone hot-air balloon takes flight. 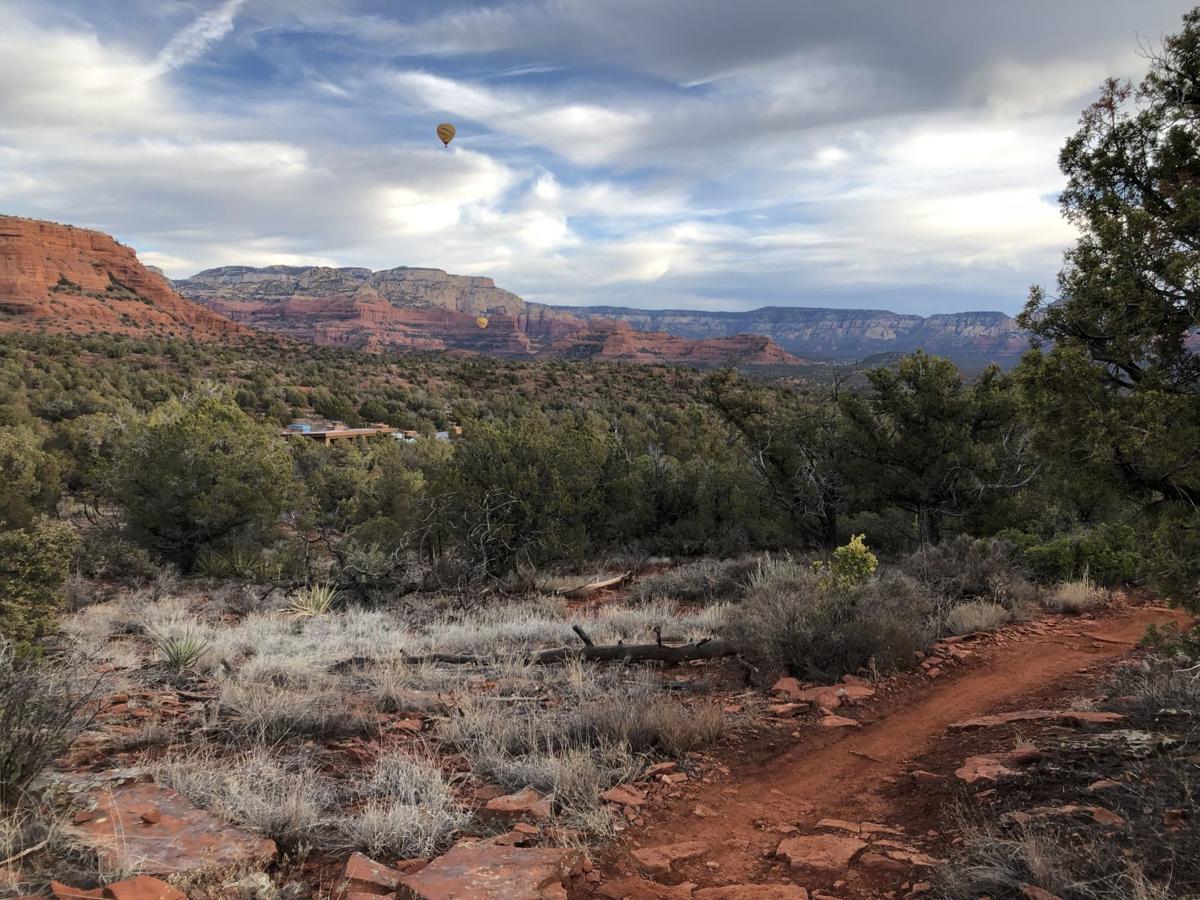 Gorgeous views of the red rock formation — plus sight of a hot-air balloon — highlight the Aerie-Cockscomb Loop in Sedona. 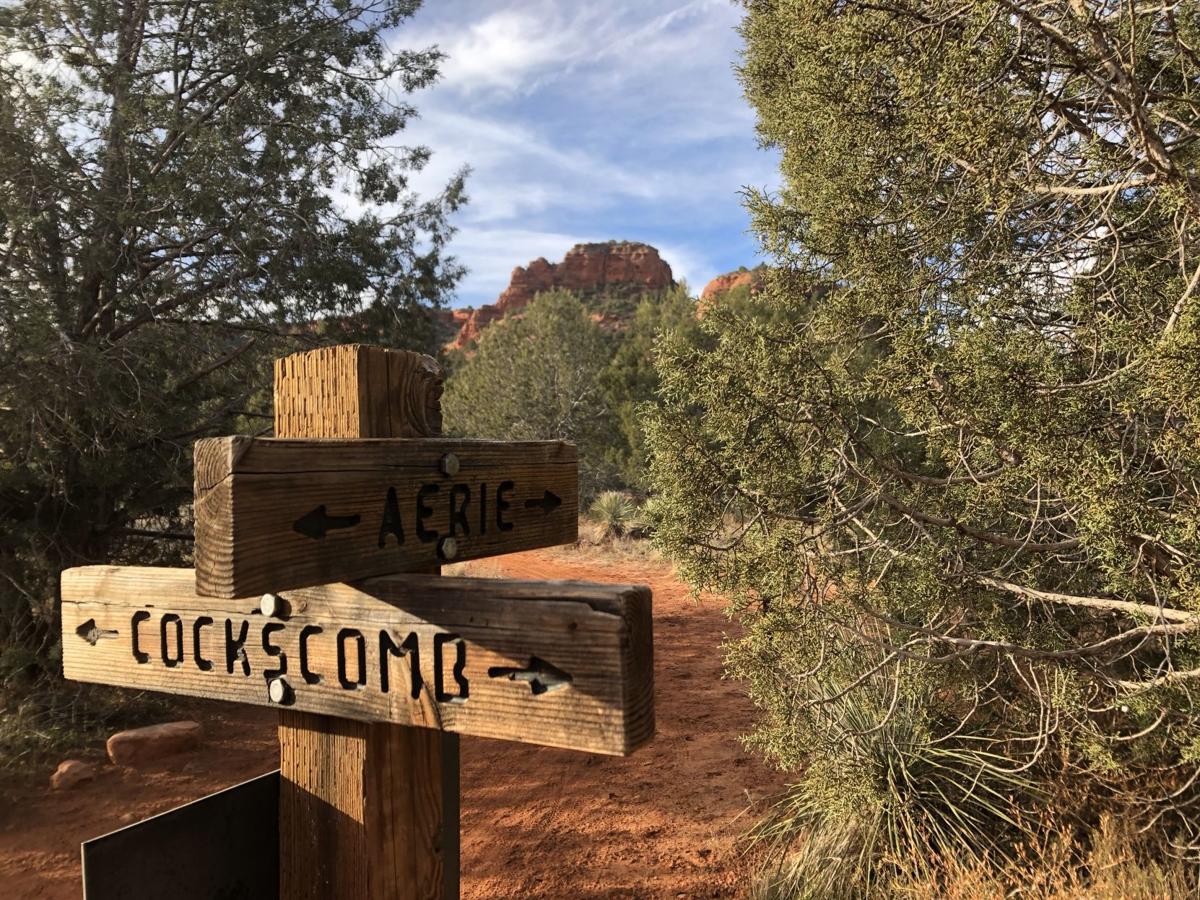 At the intersection of the Aerie and Cockscomb trails, a view of Doe Mountain, the destination, comes into view. 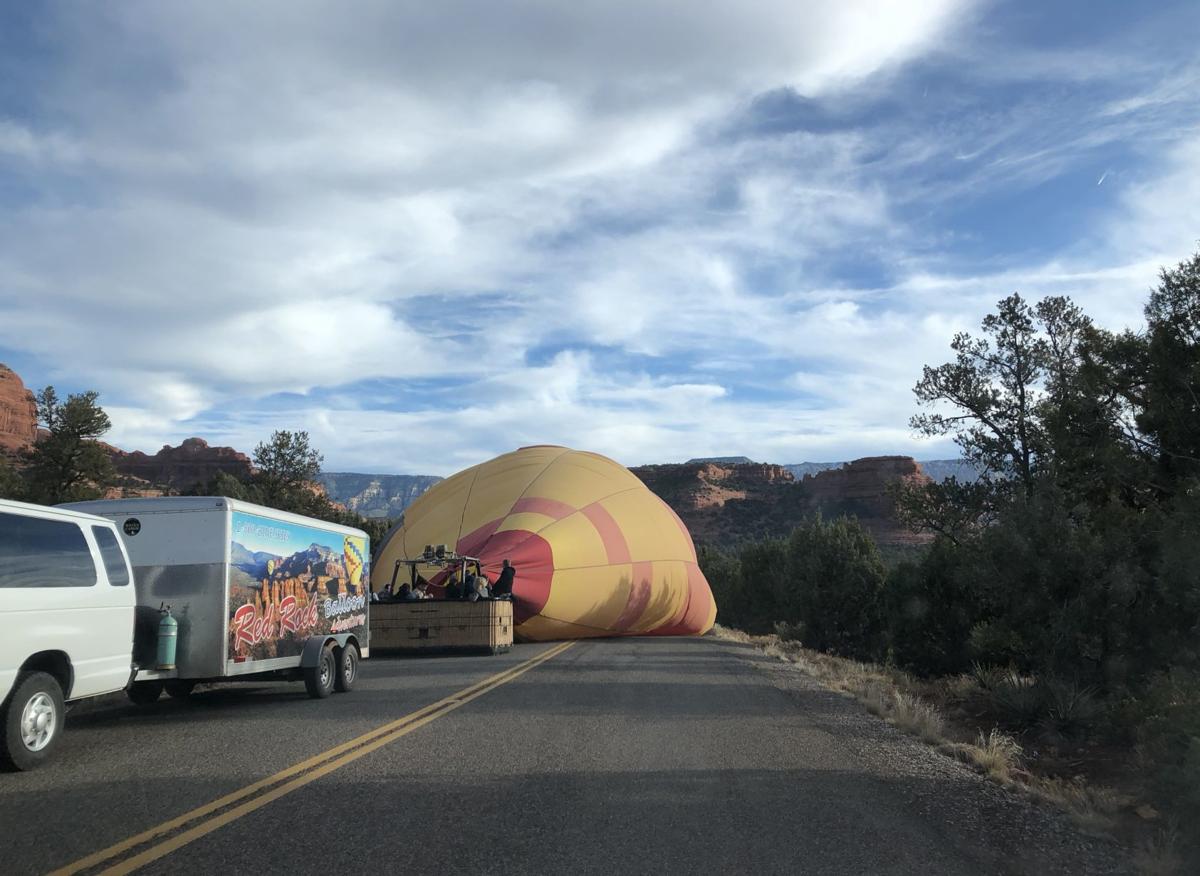 Hot-air balloon tourists land on the road leading the Aerie-Cockscomb Trailhead in Sedona. 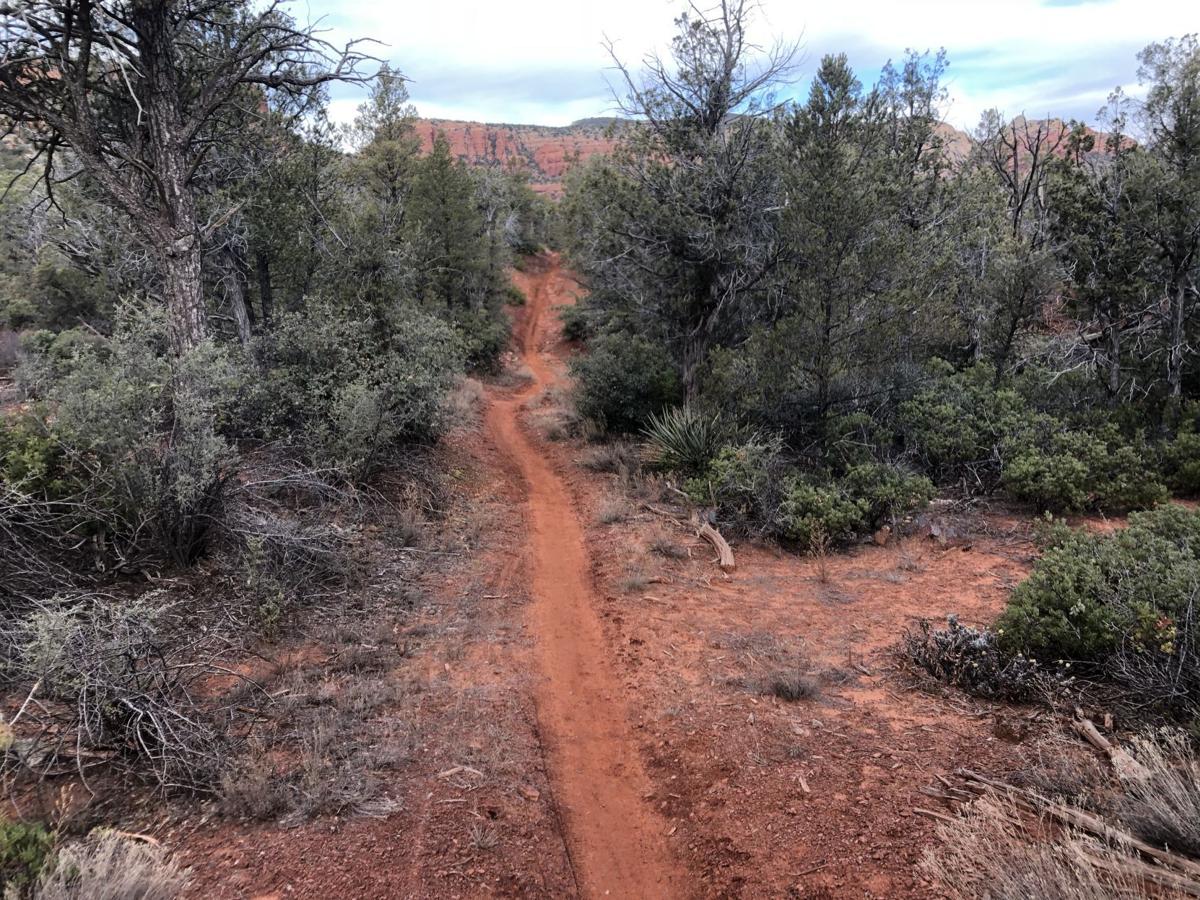 A section of the Cockscomb Trail features a series of undulations that are fun to traverse. 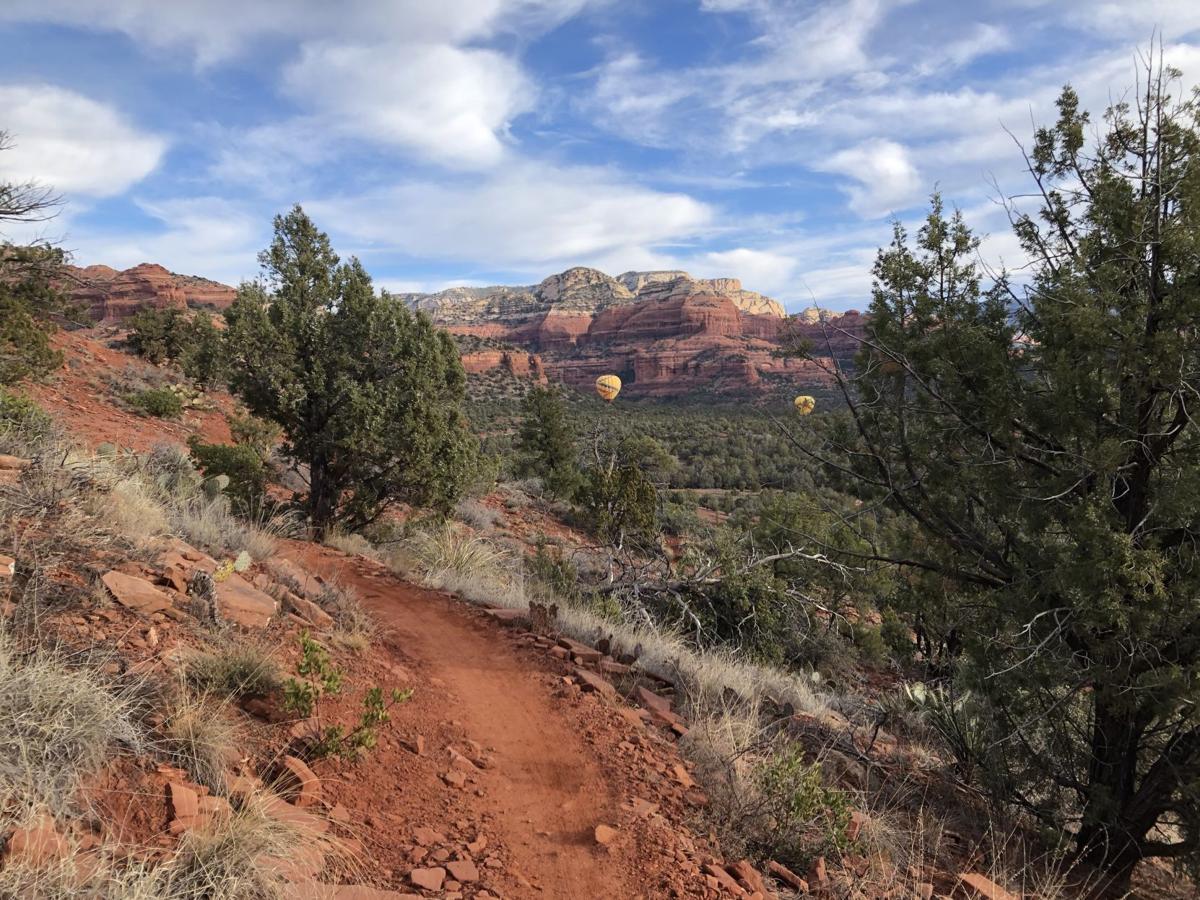 Two hot-air balloons hover over the canyon below the ridges of the Cockscomb Trail in Sedona.

As the sun rises over the famous red-rock formation, the Cockscombs, a lone hot-air balloon takes flight.

Gorgeous views of the red rock formation — plus sight of a hot-air balloon — highlight the Aerie-Cockscomb Loop in Sedona.

At the intersection of the Aerie and Cockscomb trails, a view of Doe Mountain, the destination, comes into view.

Hot-air balloon tourists land on the road leading the Aerie-Cockscomb Trailhead in Sedona.

A section of the Cockscomb Trail features a series of undulations that are fun to traverse.

Two hot-air balloons hover over the canyon below the ridges of the Cockscomb Trail in Sedona.

So all I wanted was to enjoy an easy and tranquil jaunt in west Sedona — sans crowds, sans ubiquitous jeep tours, sans killer climbs and rocky technical maneuvering, sans snow and ice during these frigid winter months.

Now I beg of you: Is that too much to ask? Can’t a guy get a little solitude?

I had just the trail picked out to accomplish this mission — the 5.4-mile Aerie-Cockscomb Loop, originally a mountain bike trail and one relatively little used by the designer-hiking-boot set clamoring for dramatic, up-close red rock formation to post on “The ‘Gram.” I’m fine with the mountain bikers I’ve encountered there; we do that polite do-si-do dance to let each other pass.

But on this morning, I crazed some "me-time." Self-care, I think is the buzz word.

What I didn’t expect, but nevertheless was subjected to, was being stalked the entire way, and even on the drive home, by a floating armada of hot-air balloons — three, to be exact — ferreting tourists on a sunrise tour of the canyon.

It began innocently enough. Having parked at the Doe Mountain trailhead off Boynton Pass Road, where the Aerie and Cockscomb trails intersect with the Doe ascent, I set off in a counter-clockwise direction on a relatively smooth singletrack that wends around the mountain.

My, wasn’t this peaceful? I didn’t even mind the brief road-crossing in the first half-mile, bane of any trail snob, because the trail resumed its gentle, undulated, curvy path soon enough. When I made a turn east and reached the top of a short incline, I saw a sublime sight: the silhouette of the famous Cockscomb rock formation with the sun just peeking above the spires, casting shafts of light down into the valley below.

But, wait, what was this bulbous object, just to the right of the Cockscombs, that hoved into view?

It was a hot-air balloon. I was fine with it. Really, I was. Didn’t think it at all an intrusion onto the pristine pastoral canvas. In fact, it kind of lent a gauzy, quasi-inspirational cast to the mise-en-scene, like a poster hung in a junior-high counselor’s office telling kids to dream big.

I stopped running, whipped out my smart phone and snapped a photograph, then continued on my way. I thought nothing more of it and instead took in my more immediate environment, thinking that the psoriatic-barked alligator junipers are criminally ignored in the land of stately ponderosa pines and all manner of cacti.

A few miles in on Cockscomb, just past the intersection with the Rupp Trail, I heard what sounded like staccato heavy breathing. I looked around, saw neither a rampaging javelina nor a COPD-afflicted hiker anywhere near. Then I realized the noise was coming from above — two balloons loomed, their periodic gusts of hot air or helium or whatever they use now to stay airborne responsible for the aural pollution.

They were too high in the sky to see inside the gondolas, but I imagined them peering down upon me, a lone loper and critiquing my running form or slagging on my too-white legs in half-tights. Call me painfully self-conscious, but it had a deleterious effect on my outdoor experience.

I whipped out my phone again and took more photos, this time thinking that it was only fitting I gawk at the tourists since, I presumed, they were gawking at me.

At this point, I reached a particularly pleasant part of the trail. For about a quarter-mile, there is a series of singletrack undulations where you can really let loose and run up-and-down the tire-smoothed path with impunity. I tried to lose myself in the moment, become one with the trail, but those two balloons remained in my peripheral vision — not quite as annoying as drones but omnipresent nonetheless.

Beyond the undulating hills, the trail veered north, with Doe Mountain on the left. On the right was a pleasant view of the valley floor: the red-rock of Boynton mesa, the lush foliage dotting the canyon, some expensive houses standing watch and, way in the distance, Wilson Mountain.

Smack dab in the middle of the view? Yup, those two balloons, this time seemingly losing elevation and hovering over the canyon below — almost at eye level with me on the ridge. Irrational, I know, but I took two more photos just in case the authorities might need them for evidence … of what, I don’t know.

Luckily, I had reached the four-mile mark and the junction where the Cockscomb meets the Aerie Trail. I headed south, back towards Doe Mountain and away from the now-intrusive balloons. I enjoyed this last stretch immensely. There’s some climbing involved, and the previously-smooth trail gets a bit more rocky and rutty, but with the face of the mountain (actually, just a mesa, but whatever) snug on your left, you return to that back-to-nature vibe until reaching the trailhead.

Trail users have a choice at this point. Complete the 5.4-mile loop and call it a morning, but make a left and head up switchbacks 0.6 of a mile to the top of the mesa for even better, 360-degree views of the valley.

I trundled on up and, upon summiting, took a gander. Nice views, indeed. And I did not see either of the balloons that seemingly had been stalking me. (I never did encounter that third balloon, the one near the Cockscombs, after that initial glimpse.)

Back in my car, noting to myself that I had not seen a soul on the trails even though there were three other cars parked at the trailhead, I set off back to Flagstaff on Boynton Pass Road. I had traveled only a few hundred yards when I encountered a traffic jam (OK, three cars stopped) ahead. Getting closer, I saw a big, billowing balloon, a sea of yellow, covering both lanes and spilling onto the soft shoulder. And there was the gondola sitting into the south-bound lane, passengers staring at the blob only partially deflated.

There we waited as two men scurried around, trying to move the partially-flaccid balloon so that at least one lane of traffic could pass. They kept tamping it down, as if trying to deflate an air mattress. Meanwhile, we waited. And waited. At last, cars swung onto the soft shoulder and drove past — only to encounter the other balloon in the same predicament not 200 feet away.

All I could do was laugh. I was too tired from the trek to get indignant or even a tad huffy. But I whipped out my phone and snapped a couple of photos — just in case.

Driving Directions: From Flagstaff, take Highway 89A for 27 miles to Sedona. Continue through Sedona to Dry Creek Road at the west end of town. Turn north on Dry Creek Road (FR 152C) three miles to the Boynton Canyon intersection then left on FR 152C about a mile to the trailhead.

The Route: From the Doe Mountain Trailhead, climb one-tenth of a mile to the intersection with the Aerie Trail. Turn right (south) on Aerie to go counter-clockwise around Doe Mountain. After slightly under a mile, turn left onto the Cockscomb Trail and remain on Cockscomb for slightly more than three miles. At the junction with the Aerie Trail, turn left on Aerie and return to the trailhead.

Out-snobbing Randy Wilson's Outdoors articles is quite a feat. Way to go, Sam. Newsflash, before you write 10 more just like this: Sedona is not where you go to get solitude, multi-use trails have other users, the trails here are not purpose built for the bikini-short running set, and people have been sharing trails nicely in Flagstaff and Sedona for many years. There may be a new "Best place to live for trail running snobs" article in Running Magazine, go look for it.

Really?! One of the truly beautiful things about Sedona is the balloons. Stalking you?! Not a chance, what a ridiculous story written by someone who clearly does not know beauty and serenity when they see it.