FBI fears 'insider attack' on inauguration; all troops being vetted

Oak Creek waters downstream from a Tuesday sewage spill site in Sedona tested safe for swimming on Wednesday and Thursday, according to City of Sedona officials.

Despite the safe results, residents are still worried about the lasting impacts.

The spill was caused by a malfunctioning pump that caused the 15,000 to 20,000 gallons of sewage to flow into Oak Creek through storm drains, according to Mike Thomas, president of Kinney Construction Services. Lauren Browne, spokeswoman for the City of Sedona, told the Arizona Daily Sun that this was the first sewage spill she knew of in Sedona that has ever drained into Oak Creek.

The sewage spill was the result of a Kinney Construction Services project tasked with replacing a sewer line along State Route 179. The spill happened within the City of Sedona south from the Tlaquepaque Arts and Shopping Village. KCS workers left the construction site at 5 p.m., and sewage was reported flowing at 7:30 p.m. A KCS worker fixed the pump at around 8:30 p.m., Thomas said.

The spill sent the untreated liquid effluent through the city’s storm drain system into the creek 750 feet downstream. The city said the spill came out at approximately 150 gallons per minute, compared to Oak Creek’s flow rate of 13,000 gallons per minute.

The city has put up warning signs and set up yellow caution tape in an attempt to keep people out of the areas near the spill. Kinney Construction Services accepts responsibility for the spill and has handed out information to residents and businesses with direct creek access.

Point-in-time tests were conducted by the city at several locations Wednesday and Thursday.

The highest test result of the five testing sites on Wednesday was from the Poco Diablo or Oak Creek Cliffs Drive site that is downstream from the spill.

The test at the location showed E. coli levels that met state and federal safe-swimming standards on Wednesday. That said, the Poco Diablo test was about six times higher than the site upstream from the spill at Bear Wallow.

In response to the tests, Brown wouldn’t say whether people should return to swimming; rather, she relied on people to make their own judgement based on the data.

“Is it safe to swim? It’s hard for me to decide that,” Browne said. “We’ve provided the numbers and they’re beneath the threshold. It’s up to the person to decide.”

Several residents that work directly next to the site still weren’t aware of the spill on Thursday afternoon after the incident had been announced by the city.

Lisa Winters, board chair for the Oak Creek Watershed Council, said she and many others in the city were surprised and worried about how long the city took to inform residents of the spill. The spill occurred on Tuesday and information was released late Wednesday evening. She still has lingering concerns about other types of bacteria and potential viruses, and the type of cleaner used to clean up the site.

The creek normally has notable levels of E. coli due to trash and human waste leftover from tourists that flock to the creek in the warmer months. Like other parts of northern Arizona that have seen increased recreation due to people looking to get outside after sheltering in place from the coronavirus pandemic, spots in Oak Creek have also seen increasing tourism, Winters said.

“We’ve had such a busy season of summer tourism. The creek is really loved to death,” Winters said. “Now to also have other pollution and impacts into the creek that are preventable? It’s just something that doesn’t need to happen.”

Browne responded to resident concerns by saying this sewage emergency is a new challenge for the city, and that they are still trying to find out when the spill began and exactly how much liquid came out.

“I realize that [process] took time, we’ve also never had a sewage spill like this,” Browne said. “We were thinking on our feet. We tried to get information out as quick as possible.”

While Winters said she’s glad the city is testing for the safety of swimmers, she is still worried about the impact other bacteria could have on the wildlife that rely on Oak Creek. From the mayflies that swim in the water to the threatened narrow-headed garter snakes that live on the banks, in her mind it’s all connected and at risk through the food chain. She hopes the city also looks into testing other bacteria and the soils to ensure that wildlife isn’t adversely affected.

“The wildlife that was using the water is still using the water. They don’t read the signs,” Winters said. “We have to be looking out for those critters as well.”

A sewer replacement project along State Route 179 in Sedona sent thousands of gallons of sewage into Oak Creek on Tuesday night.

The emergency siren system in Oak Creek Canyon will sound at approximately 10 a.m. on Wednesday, Oct. 28 in a test conducted by Coconino Count… 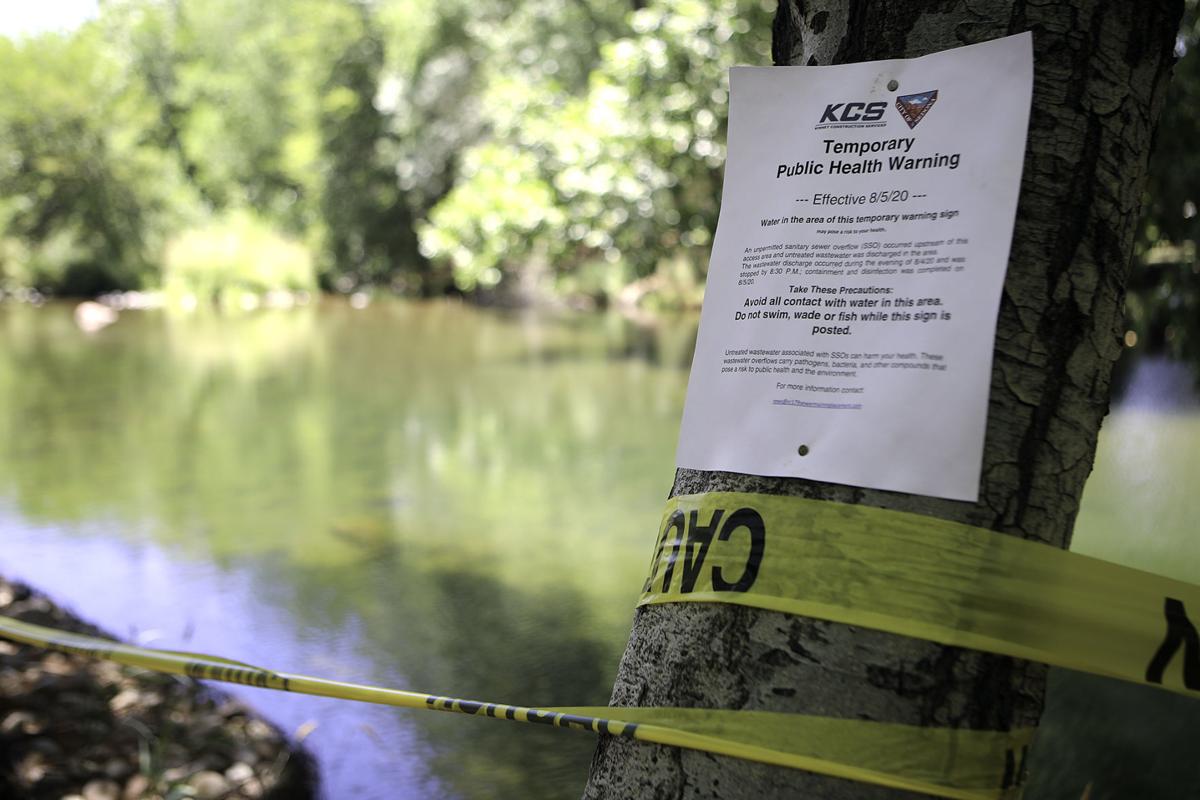 Caution tape and warning signs line the shore of Oak Creek at the Inn Above Oak Creek after an unpermitted sanitary sewer overflow occurred Tuesday evening along SR179 in association with the Sewer Main Replacement Project, dumping up to 20,000 gallons of untreated liquid effluent into the creek. Kinney Construction Services, the contractor for the project, is responsible for the spill and has temporarily suspended work on the project. 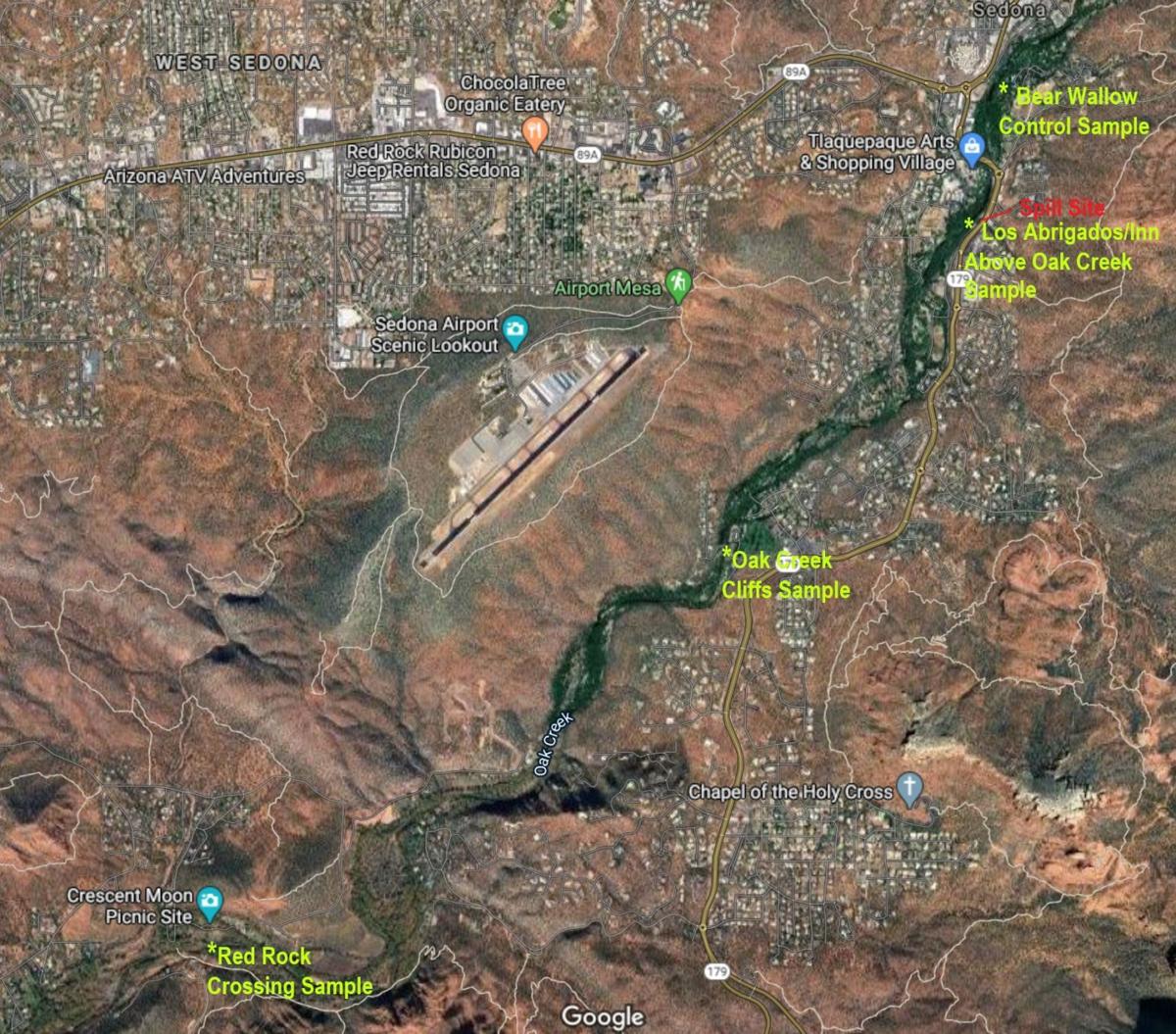 The City of Sedona mapped out where testing has occurred on Wednesday after a sewage spill sent 15,000 to 20,000 gallons of sewage into Oak Creek.