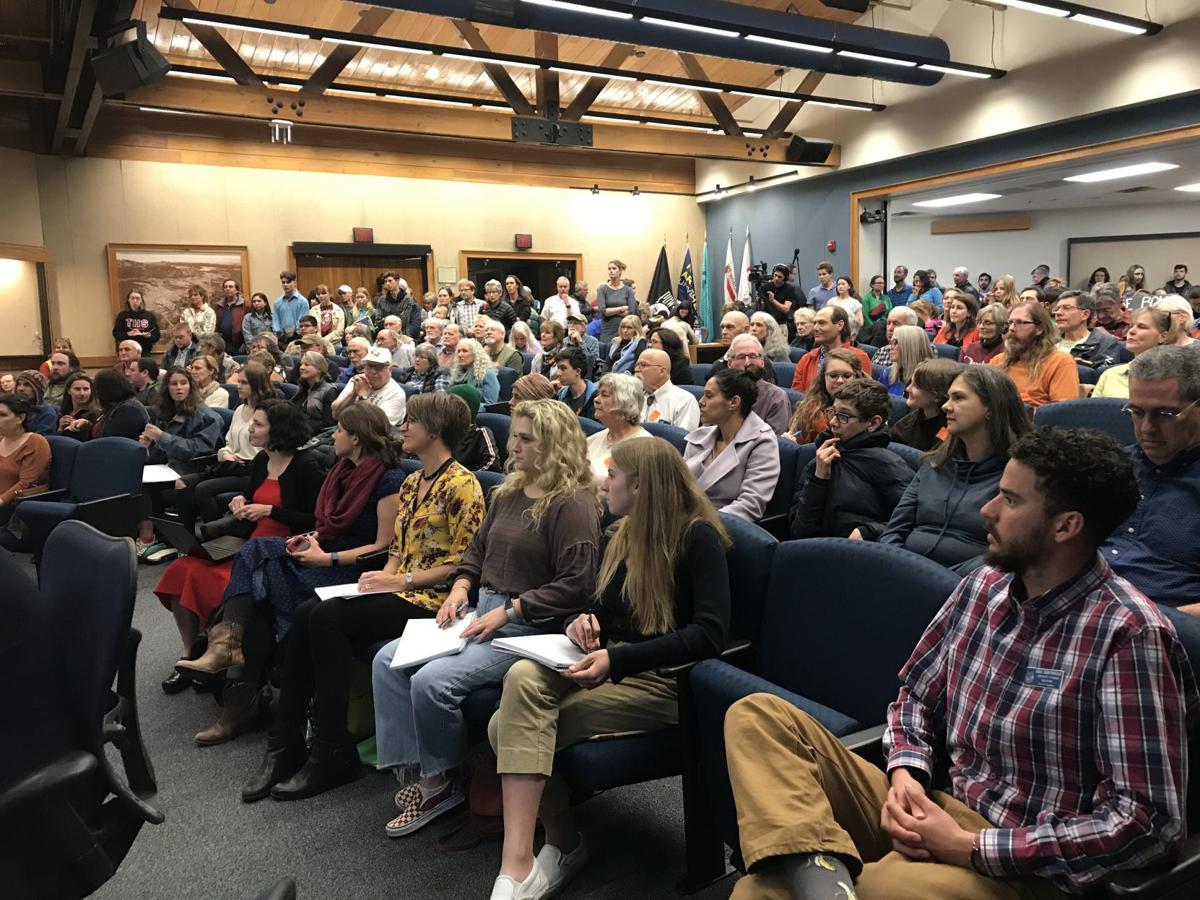 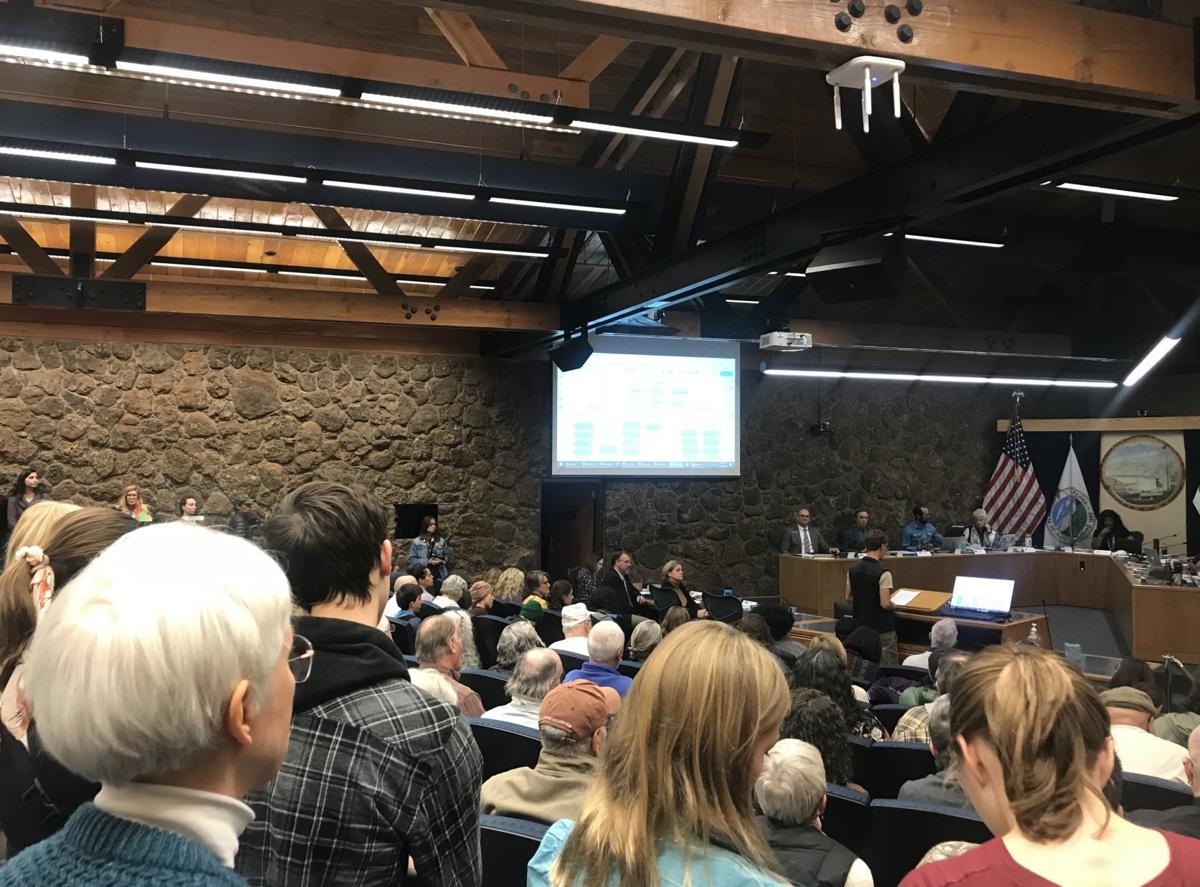 Members of the public and the Flagstaff City Council listen to Flagstaff resident Caleb Eckert as he asks the council to pass a climate emergency resolution earlier this year.

There is a climate emergency. That was the conclusion of Flagstaff City Council after a nearly four-hour discussion with over 250 members of the public present during Tuesday night's meeting.

The council unanimously moved toward declaring a climate emergency with a non-binding resolution that calls on the city to make a city-wide transition to address climate change locally and achieve carbon neutrality by 2030.

The resolution now moves to the city attorney’s office to be vetted before it is officially adopted by Council.

In a report released last year, the United Nations warned significant action would need to occur before 2030 to avoid irreversible damage caused by climate change.

“We have seen and felt the sense of emergency. It’s time to declare such an emergency,” Councilmember Regina Salas said after numerous members of the public had spoken.

Sara Kubisty, one of the organizers behind the petition asking the council to declare a climate emergency, said she was pleased with how the meeting had turned out. Kubisty added that although the future resolution may be non-binding, it’s another example of how the community can show the council that the issue of climate change is important and needs to be addressed locally.

Declaring a climate emergency sets a standard that residents and voters can hold the councilmembers to during future policy discussions, Kubisty said.

Kubisty said the petition’s creation coincided with last year’s climate march, at which they collected close to 250 signatures.

“I think it went exceedingly well, and that’s due to the community,” Kubisty said of the meeting.

According to a fire marshal, the crowd peaked at 268 people. A crowd that size is a fairly rare sight at council meetings, drawn by issues like the minimum wage or The Hub development.

At its height, the crowd overflowed the council chambers, with about 38 community members sitting on folding chairs in the lobby of city hall, watching the proceedings on the live stream of the meeting. Many members of the public wore small orange pieces of felt that Kubisty said symbolized their support of climate action.

Nikki Cooley, a co-manager of the climate change program at the Institute for Tribal Environmental Professionals, was among the crowd and told Council they needed to begin taking action to address climate change and preserve the environment. Being a Navajo woman, Cooley said she has been experiencing the destruction of the environment since she was a child.

“You, city council, can be that long term catalyst that benefits our future, our environment. I urge you to act now, not when we are in the middle of a devastating disaster, a devastating natural disaster that can be prevented right now,” Cooley said.

“Just this winter, my husband was asked to go to Australia to fight some of the worst fires we have ever seen. He has witnessed fires becoming more intense and unpredictable and lost coworkers in the devastation,” Ortega said.

Councilmember Austin Aslan agreed, adding that the declaration followed the steps laid out in the city’s climate action and adaptation plan, which Aslan said is yet to be fully implemented.

The climate plan, unanimously passed in 2018, states numerous policy changes and goals the city should make to help address and prepare for the effects of a changing world.

Evans pointed to a number of times Council has failed to act on climate issues because it was politically unpopular to do so. While direct climate change action garners support from many parts of the population, issues that impact the climate less directly like infill development, building density and parking see much more public controversy.

And that public opposition can prove challenging for councilmembers when making changes suggested by the climate action plan like building a more walkable urban environment.

“If we’re going to move forward in a manner that’s bold, that means this council is going to have to grow a backbone. There is no other way I can put that,” Evans said.

The conversation mirrored statements made when the city’s climate plan was created, when many acknowledged that unpopular decisions might have to be made on tough topics.

“Now we talk about making places more walkable, yet every single time we have a high density project we have drama,” Evans said. “So I’m going to tell Council let's be bold, and the next time we have the ability to do the right thing, we need to do it.”

The petition had also requested the city council raise the city’s sustainability section to the level of a division, putting it on the same stature as the public works department or the police department and giving it more influence within the city.

But doing so would have caused the city a significant financial impact.

The suggestion was seen as a good stopgap by both activists and councilmembers alike.

Additional field space, a forested area and urban farm or a Native American cultural center. Each idea could be the future for a section of ci…

Northern Arizona University is growing 1,000 trees that Arizona State University plans to use as a forest on their Phoenix campus to offset ca…

Members of the public and the Flagstaff City Council listen to Flagstaff resident Caleb Eckert as he asks the council to pass a climate emergency resolution earlier this year.