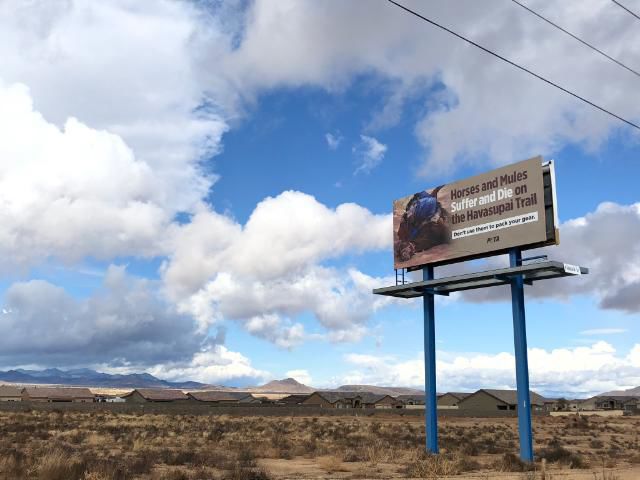 This PETA billboard in Kingman features the message: “Horses and mules suffer and die on the Havasupai Trail. Don’t use them to pack your gear.” 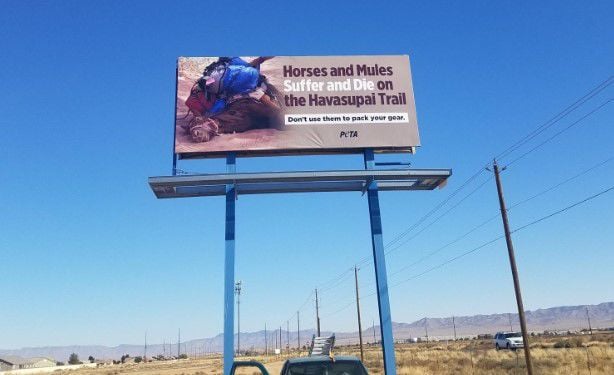 This PETA billboard in Kingman features the message: “Horses and mules suffer and die on the Havasupai Trail. Don’t use them to pack your gear.”

People for the Ethical Treatment of Animals (PETA) has purchased a billboard advertisement to warn people traveling to the Havasupai reservation about the charted abuse of pack animals on the trail down to the village of Supai.

The billboard is meant to target possibly unaware visitors traveling to Supai after flying into Las Vegas or driving from California. The billboard is placed in Kingman and features the message: “Horses and mules suffer and die on the Havasupai Trail. Don’t use them to pack your gear.”

The Havasupai Tribe has taken steps to provide better healthcare and investigation into the treatment of pack animals on the trail, but PETA and their partner SAVE Havasupai Horses say they are still hearing reports of abuse from unaware customers. The reports include allegations of horses with sores, overgrown hooves and being underweight. Since January 2019, the Bureau of Indian Affairs (BIA) has investigated seven incidents involving suspected animal abuse of horses located in around the village of Supai, Arizona within the Havasupai Indian Reservation.

For years, tourists have reported instances of animal abuse during their several mile trek to the blue-green waterfalls near the village of Supai in Grand Canyon. The reports have led to investigations and penalties for some cases, and many people take to social media and TripAdvisor to list their complaints.

Melanie Johnson, assistant manager at PETA, said the billboard was the first in a series of three billboards that would target tourists and try to convince them to not use pack animals on the route. The next two are planned for Flagstaff and Interstate 17 next summer, but PETA has not confirmed any purchases. The first billboard on Highway 66 near the Kingman Airport.

“When they see this billboard and are headed to the Havasupai Trail we hope they will rethink their decision,” Johnson said.

The Havasupai Tribal Council called the more recent reports isolated incidents, and said the council continues to work with agencies like the Humane Society of the United States to address the health of their pack animals. The council said PETA is using their time and effort to attack the tribe instead of helping to solve the issue.

"If PETA truly wants to help the Supai people and our animals, their money would be better spent in contributing to the Tribe’s active efforts to bring much-needed veterinary services to our community, rather than spending it on divisive billboards that recklessly create animosity towards our Tribe and our Tribal Members," the council said through their spokeswoman Abbie Fink.

Susan Ash, founder of SAVE Havasupai Horses, said despite years of reports, many people aren’t aware of the history of the issue until they see something happen on the trail. Ash hopes to target visitors to ensure they keep their eyes open on the trail and keep in mind to report any abuse to SAVE, PETA or the BIA.

The footage sent to PETA and SAVE shows horses and mules being neglected, underweight, with open wounds. The two organizations also cite recent TripAdvisor reviews as examples of the continued abuse and neglect.

BIA investigations found that four of the seven incidents reported to their agency were unfounded, Fink said. Two cases were investigated and sent to the Havasupai Tribal Court.

Pinkleton said due to the tribe’s remoteness, building a more permanent veterinarian or veterinarian technician location to handle some of the animal health issues will be a long and expensive process.

The humane society has helped a horse or mule 339 times, Pinkleton said, acknowledging that the same horse or meal could have been treated twice within that statistic. She also said they had rescued five horses and one mule by taking it off the reservation.

“I’d love one day we don’t need to take a team down there,” Pinkleton said, but added there is still more work to be done.

The council said it is continuing to work within their tribe to address the health of pack horses and mules, while also taking the help of federal agencies and volunteer organizations.

The tribe has plenty of money to hire their own vets but they rather squander it on booze. Glad to see PETA taking action.

This billboard is a good idea. It's not just horses who suffer--donkeys, camels, and elephants do, too. Hopefully, people will think twice.

Please, oh, please, don't force animals to provide "entertainment" for your vacation! They will still suffer long after you're home. That includes these poor horses used for rides, tiger cubs exploited in photo ops, dolphins languishing in tanks for swim-with excursions and any kind of ride - elephant, camel, pony, etc.

This will be an eye-opener for many tourists. Animals do not deserve to suffer for our sightseeing.

Great and important message. I hiked the trail and it was so much more enjoyable getting to soak in the sights without an enslaved, suffering animal being forced to carry me.

Well done Peta. The idea from the tribe that you should pay for their veterinary care is laughable. Spend your own money to treat your animals ethically.