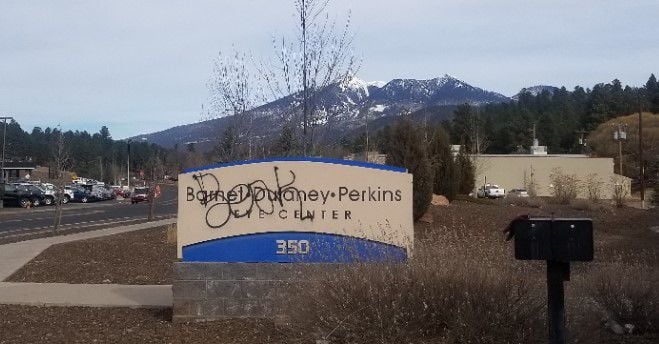 The sign for the shopping center along East Route 66 had graffiti painted on an empty store listing photographed on Thursday.

The Toasted Owl, located at 12 S. Mikes Pike St., had graffiti tagged onto its front fence photographed on Thursday.

Several city businesses found their storefronts were tagged with graffiti over the past week.

This Sunday, the unidentified tagger hit many buildings south of the tracks in the southside neighborhood and storefronts on Switzer Canyon Drive. Business owners couldn't come to a unanimous conclusion about what they think the tag says — "Beak," "Book," maybe "Beck" — but they are united in their annoyance. Charles Hernandez, spokesman for the Flagstaff police, said officers believe the cases are connected and committed by the same person, who was caught on video wearing a mask.

Ryan Hermansky, co-owner of the Greenhouse dispensary on Switzer Canyon Drive, said he hopes Flagstaff police catch whoever is tagging the buildings.

“It’s very disappointing when somebody, just in a manner of seconds, can devalue our property and affect what you’re working so hard to do,” Hermansky said.

Tina Jones, administrator at the Switzer Flagstaff Bone and Joint, said she and many other business owners on Switzer Canyon Drive have worked hard to raise the business status of the district. She felt that the tagging was a setback for the region.

“All these places along here are in service to the community,” Jones said. “Parents, watch your kids. Although, God only knows, it could be college kids.”

Hernandez said officers are currently trying to find whoever did it, but was concerned that the community of Flagstaff might see more mass tagging in the near future. A person who is caught committing graffiti can be fined up to $1,000, but it is "up to the prosecutor" to determine whether to charge the multiple cases of graffiti as one charge which could be a felony and cost $5,000, Hernandez said.

"Not only does it damage property that in some cases loses value or depreciates in value as a result of the damage, but it also causes financial impacts on the victim as they’re forced to either repair or replace the damaged items," Hernandez said.

Across the city the tags can be spotted on the outside walls places like the Canyon Inn and Highland Country Inn on Milton; the Toasted Owl, Beaver Street Brewery, Burly Fish Tattoo Parlor in the Southside neighborhoods; and the Barnet, Dulaney, Perkins Eye Center and the under-construction Surgery Center for Flagstaff Bone and Joint Medical. Some individual citizens had cars that were tagged, Hernandez said.

The tagger also sprayed over some parking meters downtown, covering up the customer interface screens. Also, some people’s cars were also vandalized.

Now many people have to decide whether they will pay the money to clean the graffiti themselves or wait for the City of Flagstaff’s Code Enforcement graffiti cleaning services to remove the graffiti for them. Cecily Amaniaci, owner of Toasted Owl, said they were unable to find the right color to match the wall, so they paid the money to paint over the graffiti in a bright yellow.

“We just wanted to get it covered up,” said Chase Rine, manager of the Toasted Owl.

The sign for the shopping center along East Route 66 had graffiti painted on an empty store listing photographed on Thursday.

The Toasted Owl, located at 12 S. Mikes Pike St., had graffiti tagged onto its front fence photographed on Thursday.