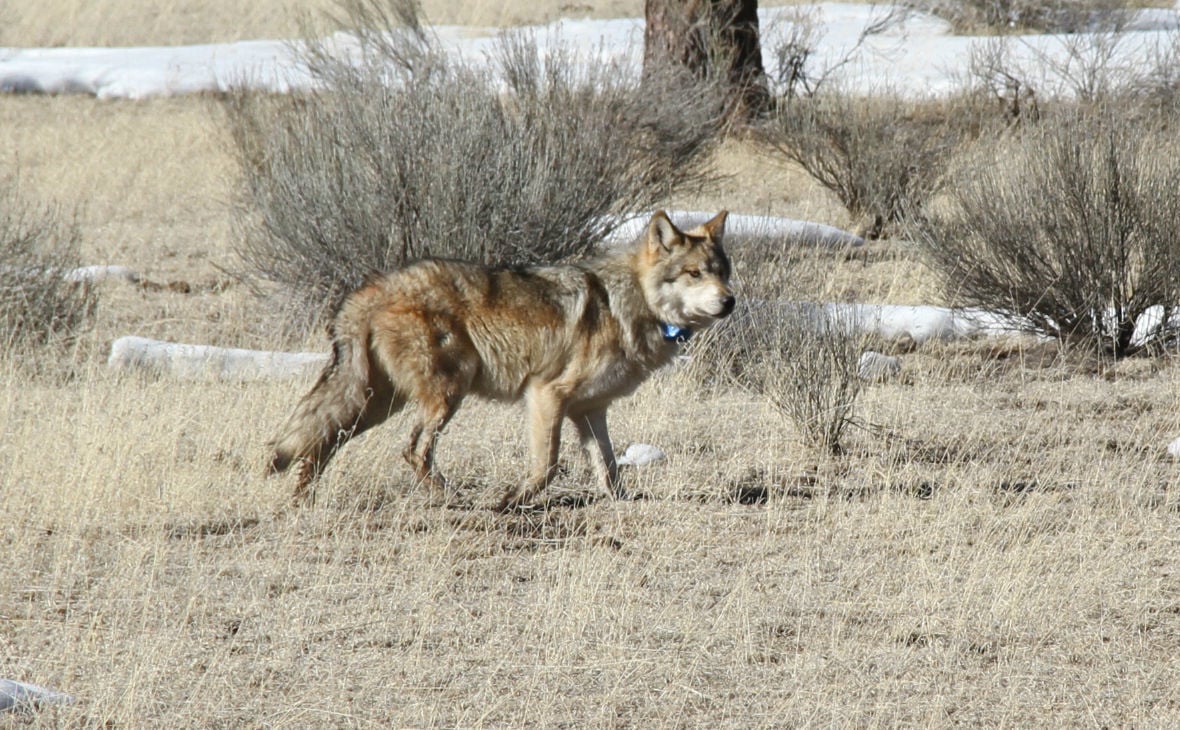 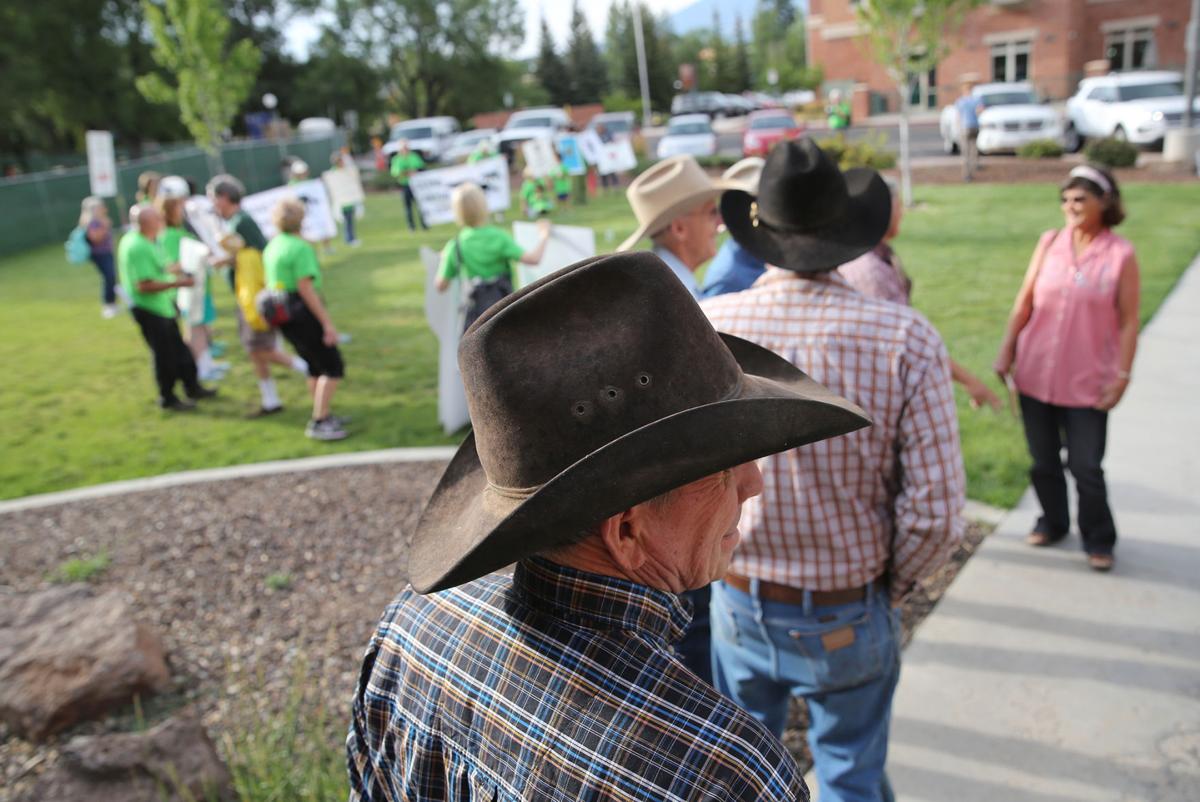 Ranchers, cowboys and protesters wait outside Prochnow Auditorium at Northern Arizona University Tuesday evening for the start of a hearing by the U.S Fish and Wildlife Service to gather public input on a draft recovery plan for the Mexican gray wolf put.

There used to be wolves on the North Rim and the North Kaibab forest, but not anymore.

And there are no plans to reintroduce them anytime soon.

On paper, that seems like a missed opportunity. If there is one place in Arizona where wolves and humans might stand a chance of coexisting, it would be the nearly roadless forests and plateaulands north of the Grand Canyon.

The reason wolves, both the northern gray and Mexican gray subspecies, disappeared from southern and central Arizona was human hunting. When the ranges were opened to cattle and sheep, the wolves became threats to livelihoods and were eliminated. Ranchers in the White Mountains still have that attitude, and even 100 reintroduced wolves are too many.

But the North Rim and North Kaibab, along with three national monuments in the region, don’t have those kinds of conflicts. The national park has no cattle, and there are very few grazing allotments left on the North Kaibab. The reason wolves and other predators were killed off a century ago was because they preyed on deer and elk that trophy hunters prized for their antlers.

But the U.S. Fish and Wildlife Service is already committed to reintroducing up to 320 Mexican gray wolves in the White Mountains of Arizona and New Mexico, and another 170 in Mexico. It says that’s the maximum that can be sustained without major impacts on cattle, deer and elk.

As for wolves north of I-40, one panel of wolf experts, citing the successful reintroduction of wolves in Yellowstone, thought several packs could be sustained as far north as the southern Rockies. But USF&WS says it is not ready to go there – and neither are the states.

That last point is important because the latest draft plan by the feds puts implementation and enforcement in the hands of state game managers -- the same people, say critics, who are the reason the federal Endangered Species Act is needed.

We would think that the compromise by the feds – no expansion of the wolf range and giving states more control over the timing and location of wolf releases – would cool some of the anti-wolf rhetoric coming from Game and Fish.

But as we have reported, Arizona wildlife managers continue to oppose any new wolf releases, much less any growth in the packs. And cattle ranchers complained at a meeting last week in Flagstaff that their input into the latest plan – which they also oppose -- was minimal and ignored.

And on the other side, wolf advocates and conservationists are dismayed by more state involvement in the plan and its disregard for northern reintroduction.

We suppose that if everyone is mad at Fish and Wildlife, then they must be doing something right. But in the case of wolves, there appears to be no middle ground. To some, they are the scourge of the settled West and the bane of sportsmen. To others, they are the pinnacle predator that will return balance to a disrupted food chain.

As we have noted in the past, a reintroduction plan without steeply ramped-up public education and outreach, along with a phase-in plan for expansion, will leave the feds very little leverage in further negotiations.

For the sake of ranchers and others in the White Mountains, we’d urge Fish and Wildlife to take a go-slow approach to reintroduction that balances sustainable pack numbers with minimal levels of cattle predation. Short of killing wolves that prey on cattle, project managers should do everything possible to protect livestock, including relocation, stun guns and other aversion tactics. Ranchers who lose cattle to wolves should be reimbursed with as little red tape as possible.

For those who support expansion northward, locals deserve to have the following concerns addressed:

— How many wolves are likely to migrate south of the Grand Canyon from North Rim release sites?

—What is likely to be their main source of food and where will they get it? Will it be enough to keep them in largely roadless, unsettled areas?

—How will wolves affect game animals, such as elk and deer, and where?

—How likely are humans to encounter them on roadways? Forest trails? Ranches? Subdivisions? Which locations are most likely and what should people do if this occurs?

—What is the threat to pets from wolves? To children?

The questions above on both sides are only a start. Fish and Wildlife should know by now it can’t satisfy everyone on wolves. But the broader the base of knowledge in the general population, the more trust it will generate in any plan that is implemented – and the more informed engagement the feds will get when changes are needed.

There might not be a middle ground between ranchers and wolf defenders, but an informed general public could make a difference

The Daily Sun will be holding one more photo scanning session Wednesday for its local history book: "Flagstaff Memories: The Early Years."  The session will be held from 10 a.m. to noon at the Museum of Northern Arizona in the Sara Lee Branigar Reception Room: More info: www.PictorialBook.Flagstaff.com

Ranchers, cowboys and protesters wait outside Prochnow Auditorium at Northern Arizona University Tuesday evening for the start of a hearing by the U.S Fish and Wildlife Service to gather public input on a draft recovery plan for the Mexican gray wolf put.