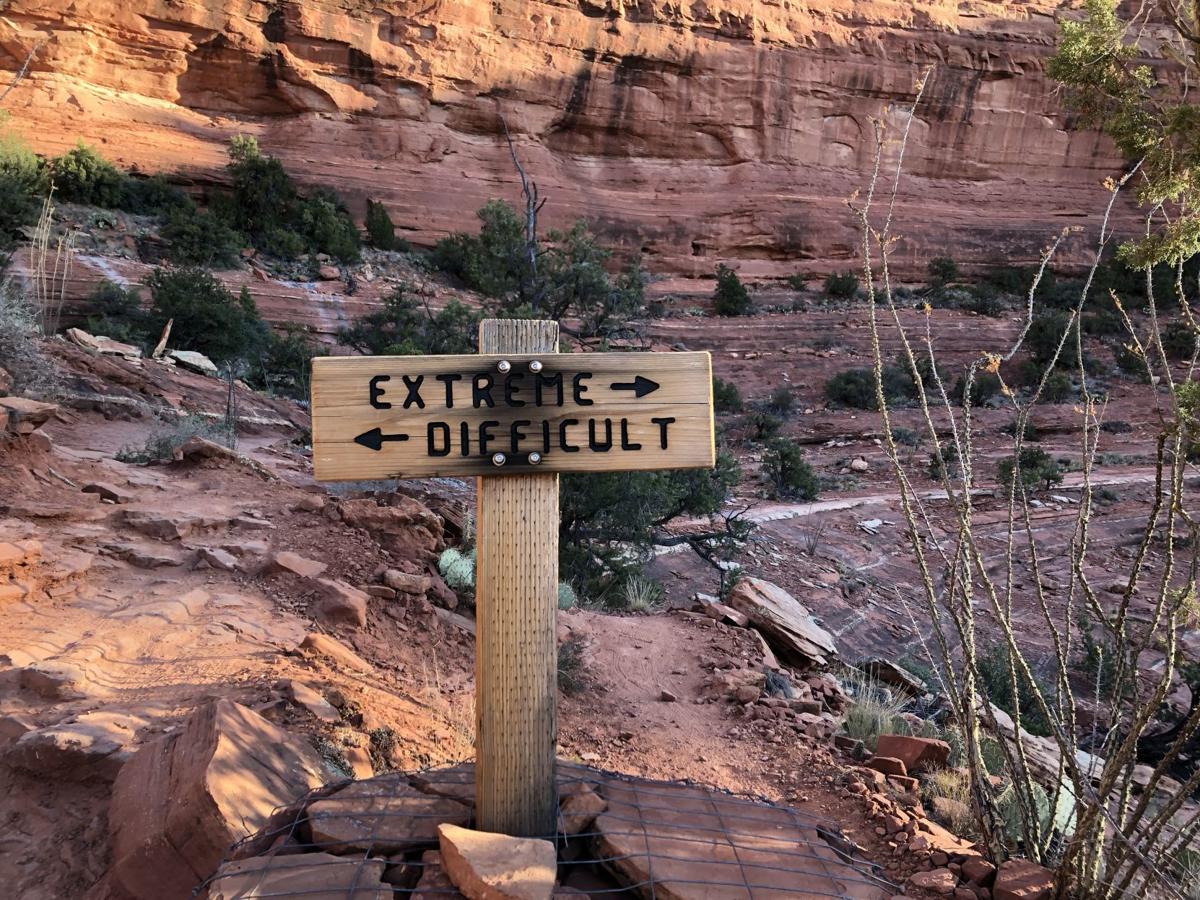 A sign on the Mescal Trail near the slickrock bowl gives trail users two options. Neither is really dangerous. 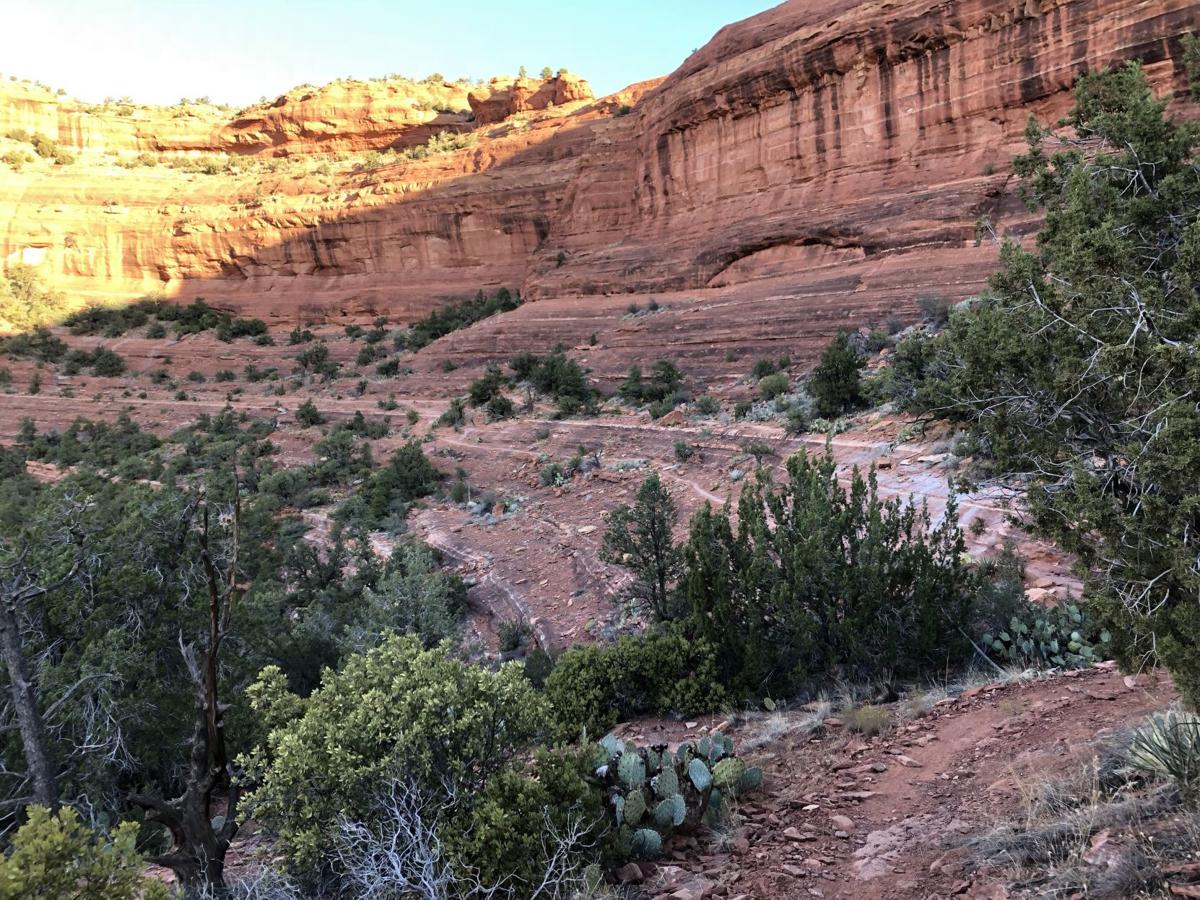 Mescal Mountain's trails around the slickrock "bowl" are narrow but doable. 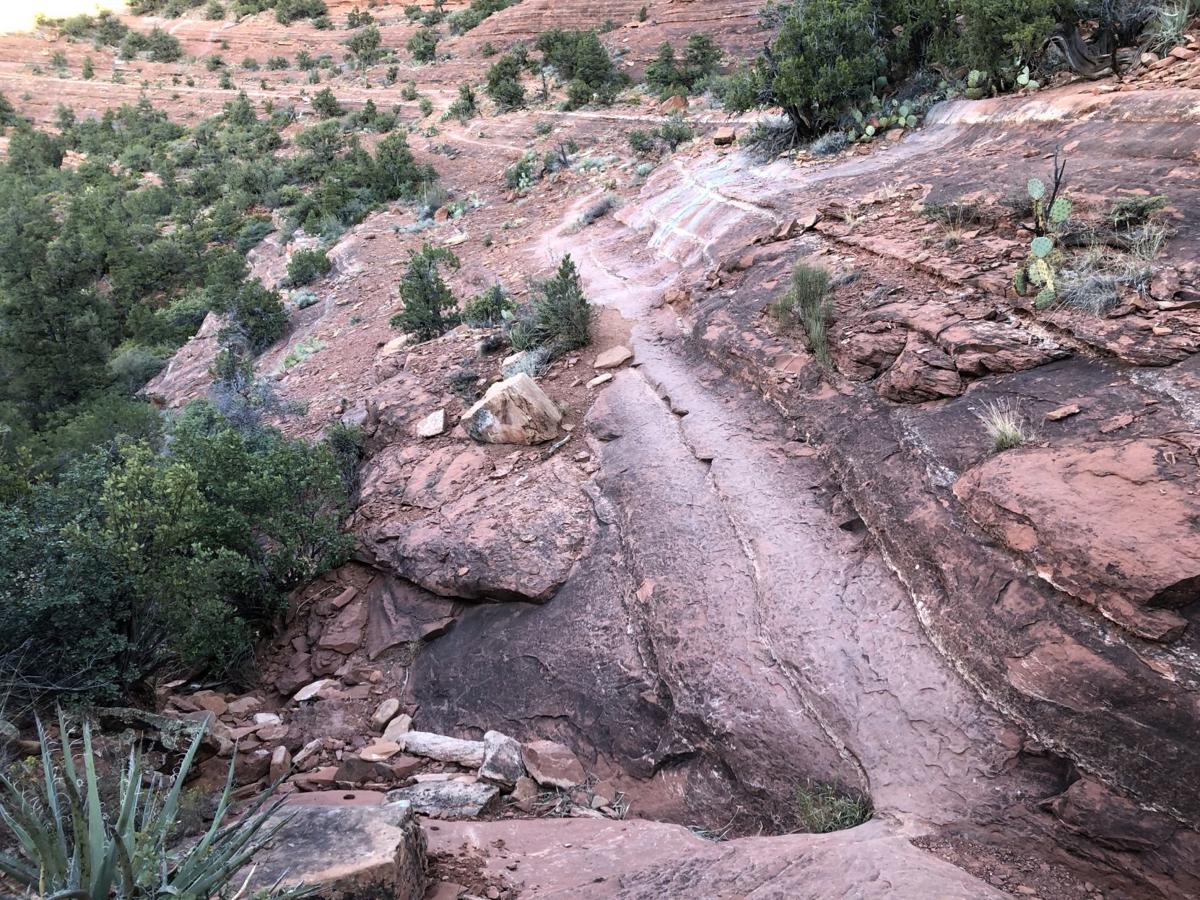 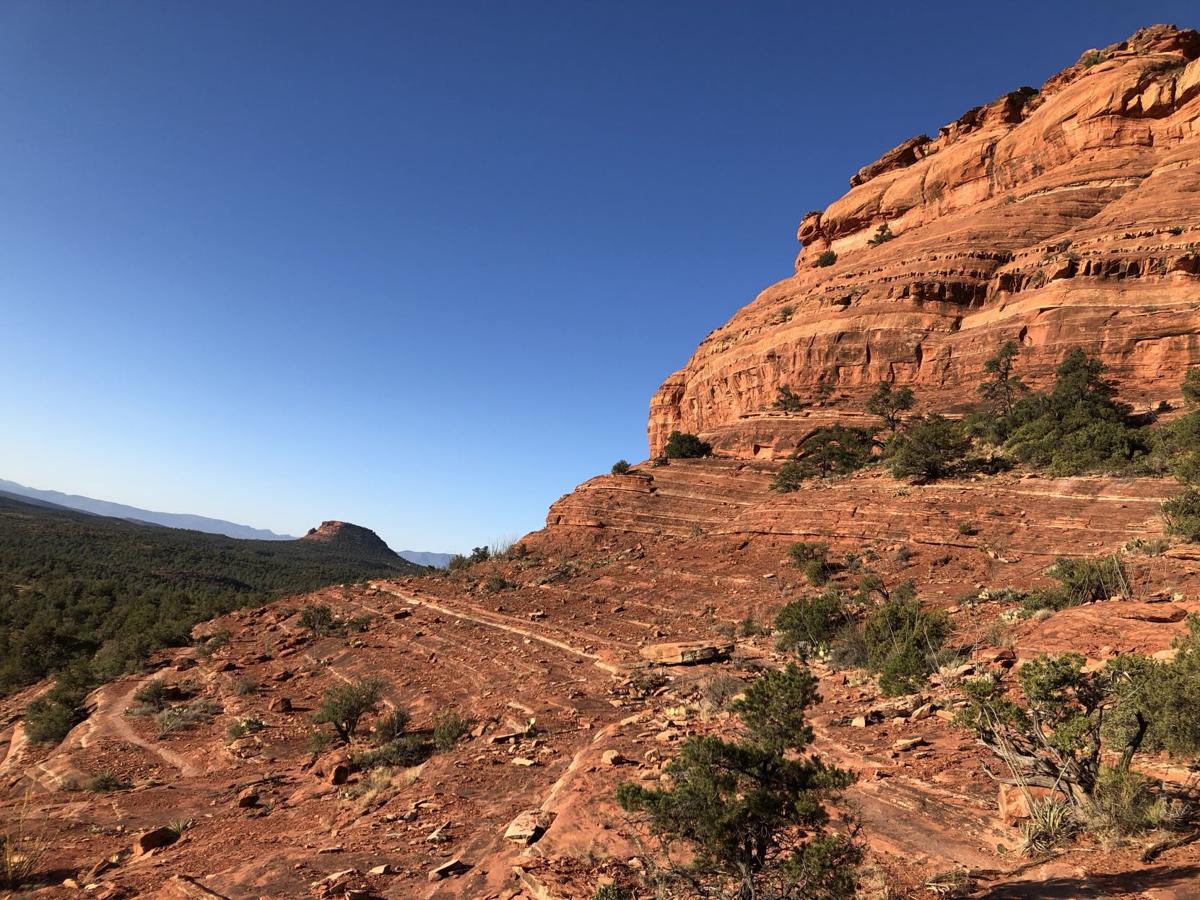 The views from Mescal Mountain can take in much of the Sedona valley. 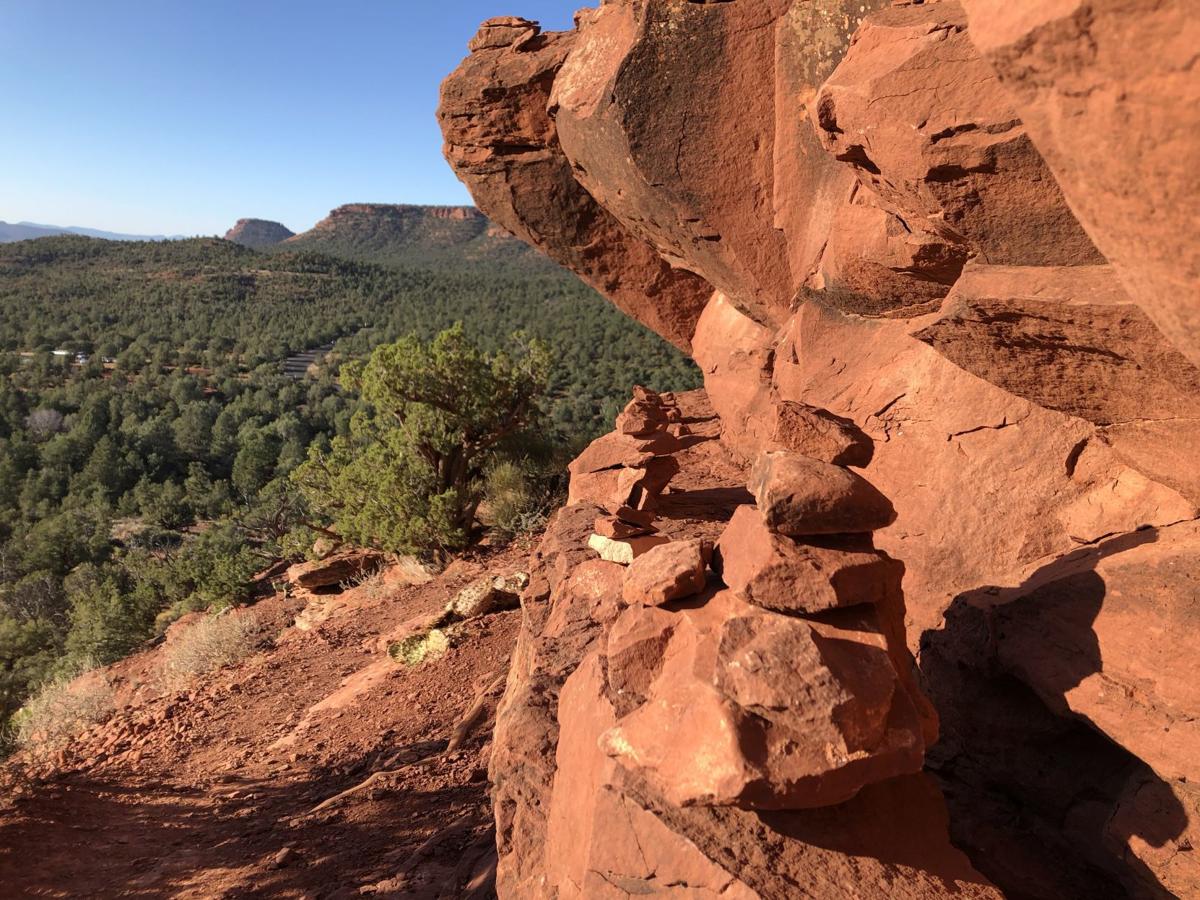 Up at the Boynton Canyon "vortex," visitors stack rocks to make cairns to commune with the "energy." 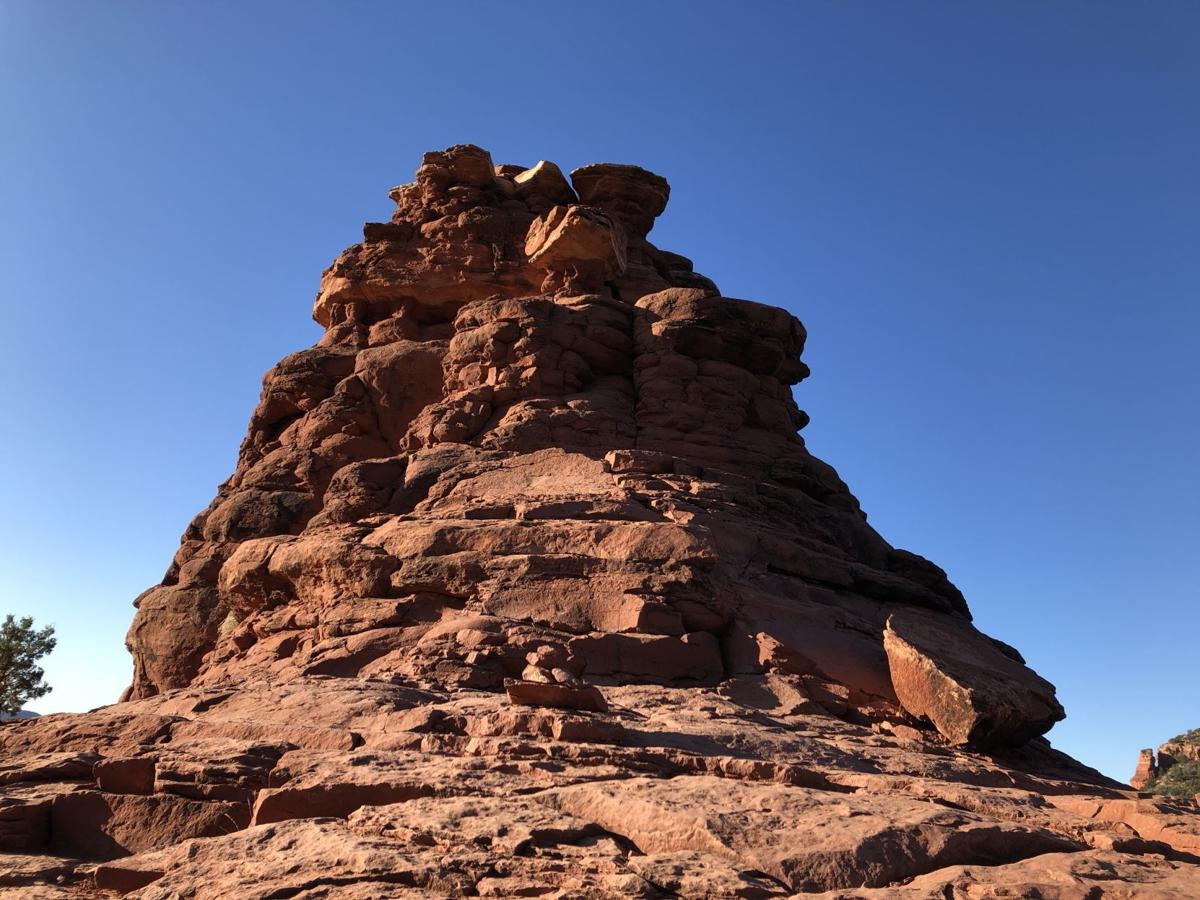 A view of the energy vortex up at the Boynton Canyon vista, near the end of the route.

Three miles or so into what Sedona locals call the Mescal Mountain Loop, I rounded a corner of the gradual climb through the slickrock and found myself face-to-face with existential angst.

How I hate when that happens on an otherwise pleasant, peaceful and uneventful lope. Which is what the loop’s first two segments, the Deadman Pass and Long Canyon trails, granted me — a reprieve from modern civilization’s stresses and anxiety amid the backdrop of red-rock formations seemingly not of this earth.

(OK, full disclosure: The wind speed on the morning of my trek topped off at close to 30 mph, and the blowing dust that sandblasted my face kind of “harshed my stoke,” as the hipsters say. Then again, I’m never happy unless there’s something about which to complain — including people who write awkward sentences just to avoid ending them in a preposition.)

Anyway, so I rounded the corner heading toward the slickrock bowl on the south-east side of the mountain, and I was confronted with a wooden post with directional arrows and warnings that just so, so typifies my existence:

There was, of course, no “Easy” option — and ain't that just like life?

Now, I like to consider myself a reasonably cautious type; at least that’s what I told my life-insurance agent. But when I’m out on the trail, communing with nature and so forth, something primitive takes hold and I become not at all averse to taking risks. Not base jumping or wing-suit type of risk, but I’m neither afraid of heights nor unwilling to shed a little blood, if necessary.

Precedent exists for the dilemma I faced. As I stood before the sign, I remembered the first time I ran the fabled Dipsea Race in Northern California, which goes from Mill Valley to Stinson Beach over Mount Tamalpais. At a crucial junction mid-race, runners are faced with two options on an extreme downhill. The signs read: “Suicide” and “Safer.” “Suicide” is quicker and a short-cut. I took it and survived.

This time, I scoped out my options. Both paths descended around the rim of the bowl, “Extreme” on the left a little more on the knife’s edge than the merely “Difficult” on the right. Maybe I was deluding myself, but neither looked overly extreme or dangerous, as long as you kept your wits about you.

I briefly looked off into the distance, in the general direction of where the rock spires of the Boynton Canyon Vortex beckoned — the half-mile payoff at the run’s end. I wasn’t seeking any cosmic energy to guide my decision-making. Well, maybe a little.

And I’m here to report that this section of the Mescal Trail wasn’t extreme in the slightest for anyone on foot. Sure, it was a long tumble down into the canyon if you slipped, but the footing was fine, the trail more than wide enough. Oh, and the views? Quite lovely. Rutilant buttes and mesas framing the forest carpet down below.

It was over too soon. When I reached the other end of the bowl, where a similar “Extreme” and “Difficult” admonition was hammered into the rock, I shrugged.

It wasn’t until later, back in civilization (aka, cell phone range), that I learned via the web that the signs were meant strictly for mountain bikers. It made sense then. It definitely would be fraught for inexperienced bikers to bomb down the “Extreme” path at breakneck speed.

Like many of Sedona’s popular trails, the 2.4-mile Mescal Trail portion of the loop originally was built by and for mountain bikers and was eventually adopted and “made official” by the Forest Service. All trail users can thank cyclists for sharing these trails with the rest of us, letting us feel like we are “extreme” people even when, on foot, we are not.

Except for some uphill and the slickrock around the bowl, this 5.5-mile loop (6 if you add the detour up to the Boynton vortex) should be rated easy-to-moderate. Despite its ominous name, Deadman Pass is mostly flat, a little dusty but affords gorgeous views of the cliffs and outcroppings along the way.

A little more than a mile north on Deadman, you make a right on the Long Canyon Trail. If is the final, southern stages of Long Canyon. If you were to turn left, you can ramble up the canyon for some close-up views of the cliffs. The Long Canyon stretch, about 1 ½ miles of gentle downhill, skirts the edges of the Seven Canyons Country Club and a major road, but, at least early in the morning, you can traverse it without seeing the golf course or hearing cars rush by.

Long Canyon ends just before you hit the road, but in recent years, a 0.3 of a mile connector trail has been built to hook up with the Mescal Trail. This is where the climbing begins – steady but nothing “extreme.”

After circling the mountain, you return on Deadman Pass almost to the trailhead. About 50 yards before that, though, make a right and go the short distance up Boynton Canyon Trail to a sign on the right leading to the vista, where the vortex awaits.

I spent several minutes hanging out at the vista but, alas, I felt no surge of vortex-driven energy. It was windy up there, and I was cold.

Too “extreme” for me. I descended quickly.

The Route: From the trailhead, go north on Deadman Pass Trail for 1.4 miles. Turn right onto Long Canyon Trail and take it all the way to its end at Long Canyon Road. Just before the pavement, make a right on a small connector trail, uphill. Turn left onto the Mescal Trail and go about 2.5 miles around the south slope of the mountain. Turn left back onto Deadman Pass Trail and return to the trailhead. Boynton Vortex option: Just before heading back to the trailhead, turn right onto the Boynton Canyon Trail and go about 0.3 miles to Boynton Vista Trail. It's a short climb to the "vortex."

Coconino County is continuing to break its records for COVID-19 cases as transmission of the coronavirus increases.

Fat Olives Italian Kitchen was a buzz of activity throughout Monday. But instead of customers, medical professionals dressed in white plastic gowns and wearing N95 respirators and face shields sat at the tables. Employees entered a few at a time to get tested for COVID-19, free of charge.

Gov. Doug Ducey is holding another weekly press conference at 3 p.m. on Monday to give updates on the state of Arizona's response to the coron…

There’s Still $130 Billion Left for Small Businesses. Here’s How to Get Your Piece

A sign on the Mescal Trail near the slickrock bowl gives trail users two options. Neither is really dangerous.

Mescal Mountain's trails around the slickrock "bowl" are narrow but doable.

The views from Mescal Mountain can take in much of the Sedona valley.

Up at the Boynton Canyon "vortex," visitors stack rocks to make cairns to commune with the "energy."

A view of the energy vortex up at the Boynton Canyon vista, near the end of the route.