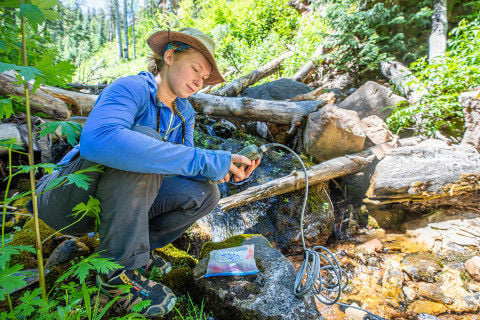 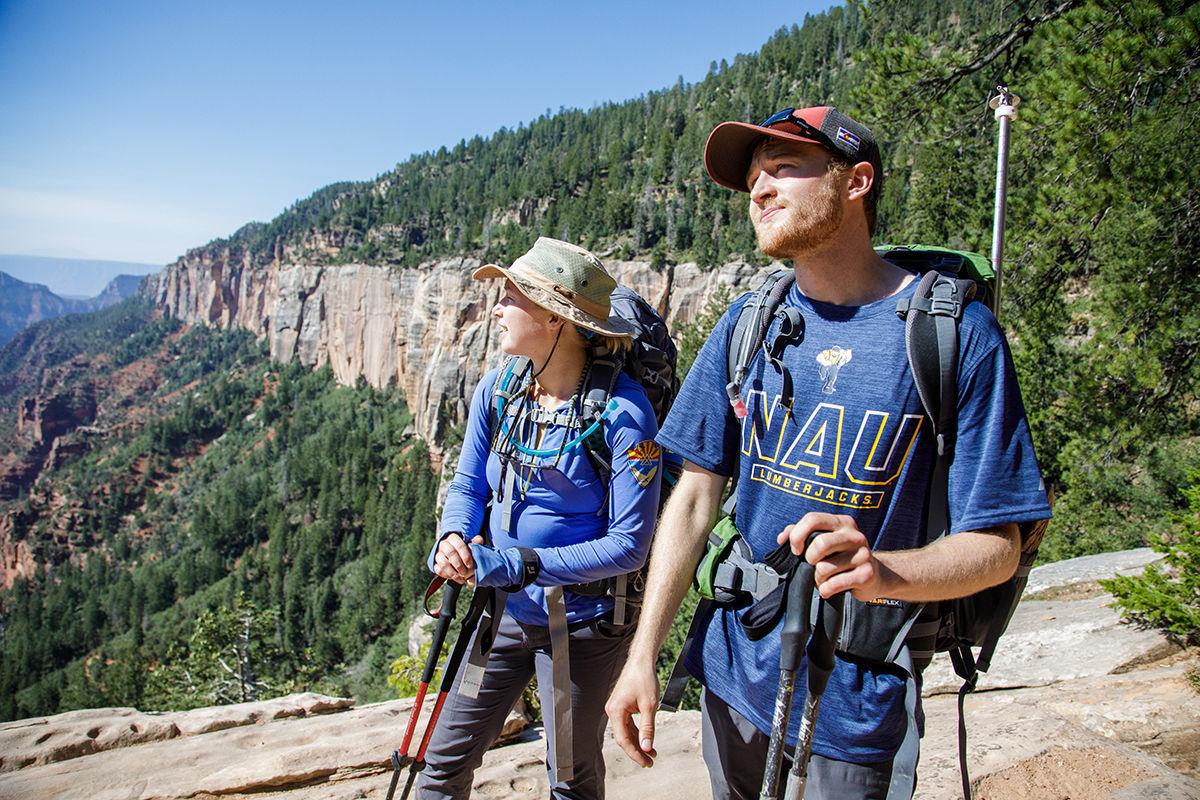 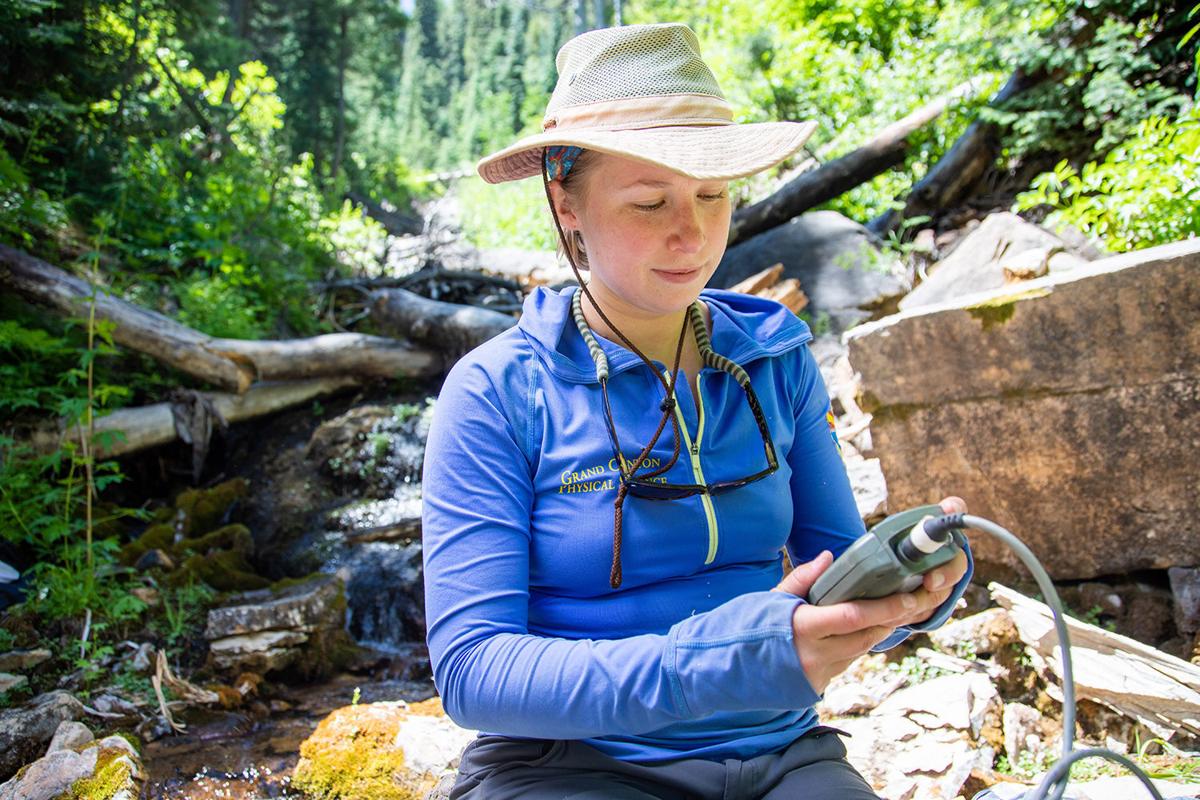 The Grand Canyon National Park has only one source of drinking water, and despite how important that water is for the 6 million people who visited the park last year, no one is quite sure where exactly the water comes from.

Natalie Jones, a research technician at partially funded by NAU and the National Park Service, worked with her colleagues to take a step toward understanding the Kaibab Plateau’s previously unmapped sinkholes that provide water for the Grand Canyon’s many springs.

The study found that instead of having around 100 sinkholes like scientists and land managers previously thought, there are actually almost 7,000 sinkholes on the Kaibab Plateau near the North Rim. The study also put forth a new method for mapping how likely a toxin could contaminate the aquifers or springs through those sinkholes.

"So usually when people identify sinkholes, they're looking at a topographic map and going: 'There's one. There's one. There's one,'" Jones said. "Or they're going into the field and surveying. Before we had this high-resolution remote sensing data, that was the only way you could do it."

Jones said this data has two uses: it can help them better understand the underground water channels, and can help land managers make better decisions about what water sources are reliable for human use and for usage of wild plants and animals.

"Areas that have more developed conduit systems are more likely to sink a contaminant faster," Jones said. "And by doing this vulnerability study, you’re also helping to identify what region or what sinkholes are likely to lead to Roaring Springs."

Currently the national park pulls all drinking water for last year’s 6 million visitors from one source: Roaring Springs. Scientists learned how little they knew about the spring after they traced a non-toxic dye from one of the sinkholes they believed went to Roaring Springs between 2015 and 2017.

"Almost none of them ended up in Roaring Springs, they ended up all over the canyon," Jones said.

Water at Grand Canyon National Park is often shut off to repair leaking and broken pipes that were originally built to last for 20 years but have been working for 30. While this study does not address those concerns, Jones said it helps land managers better understand the careful balance of the Grand Canyon water system.

The study was conducted using maps created by radar sensing technology, combined with a map showing precipitation totals in the region and a map showing different layers of geology on the Kaibab Plateau. The combination helped them determine how likely a sinkhole would be to contaminate groundwater.

"This vulnerability map gives you a nice little heat map showing you which zones are more likely to be sensitive to water input and more likely to come out in springs," Jones said.

Sinkholes in general are a key part of the Kaibab Plateau's character.

Jones explained that some of the meadows on the Kaibab Plateau get swampy during rains because of these sinkholes, but are able to resist tree growth because the water is absorbed and channeled underground before trees can make use of it.

But not all sinkholes are equal. Jones said some of the sinkholes have clay beneath them that blocks water or contaminants from being absorbed into groundwater. The water there is left on the surface until it evaporates.

So in order to better map the discrepancy between these two types of sinkholes, the study created a new model to account for a type of dissolvable rock that is found underground in the Kaibab Plateau called karst.

Karsts can exist in types of rock like limestone or sometimes sandstone.

However, as these karsts dissolve, the land above them can sink and soil can fill the space. This creates a sinkhole where toxins could seep through the soil and infect underground water more easily.

Jones explained that a cracked gas tank from a nearby gas station on the Kaibab Plateau or waste from a new development could lead to contamination.

But there are also human factors like the surrounding mines and animal factors like feces near watering holes that could also lead to a spoiled water supply.

Karst aquifers directly supply up to 25 percent of the world’s population with water for drinking, agriculture and other needs.

In the United States, karst aquifers are common around the Midwest and eastern states. However, karst aquifers in those areas are normally closer to the surface and straight shots from sinkhole to spring.

But those karsts aren't in the geologic wonder of the Grand Canyon.

Jones explained that "stacked" means that in the Grand Canyon, there are large aquifers like the Coconino Aquifer and Redwall-Muav Aquifer that are stacked on top of each other with layers of fractures in between. These many fractures act as pathways the water can take, which makes understanding exactly where the water travels in the Grand Canyon extremely complicated.

But this new model withstood her colleagues' attempts to survey the Kaibab Plateau on foot and see if the model was correct.

“They found that our sinkhole identification model was pretty darn accurate," Jones said. "So we do think that we're identifying as many sinkholes as we did.”

NAU professor Abraham Springer is named on the study and said the new model will be invaluable in helping land managers and scientists better protect a water system so complex that people may never fully understand it.

“Because the Kaibab Plateau is so large and has so many sinkholes, we’ll never be able to use dye tracers on all the sinkholes -- that might take a few millennia,” Springer said.

It takes two days of backpacking, roping over an overhanging cliff and then wading knee deep into water deep inside a cave to get close to the…