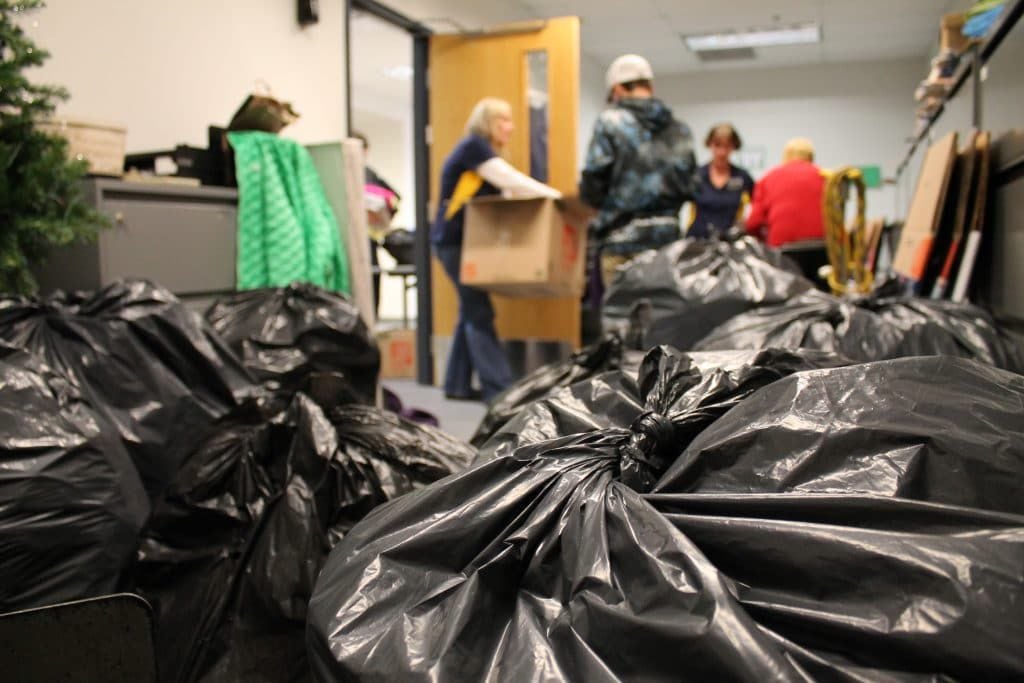 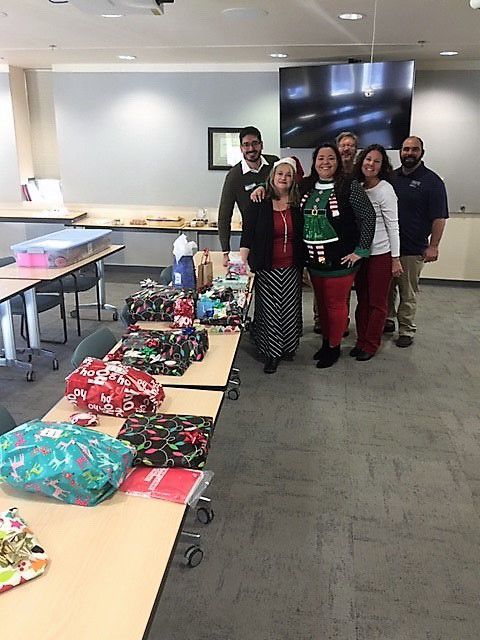 Service Professionals Advisory Council members pose with the wrapped donations that were collected for two local families earlier this month. 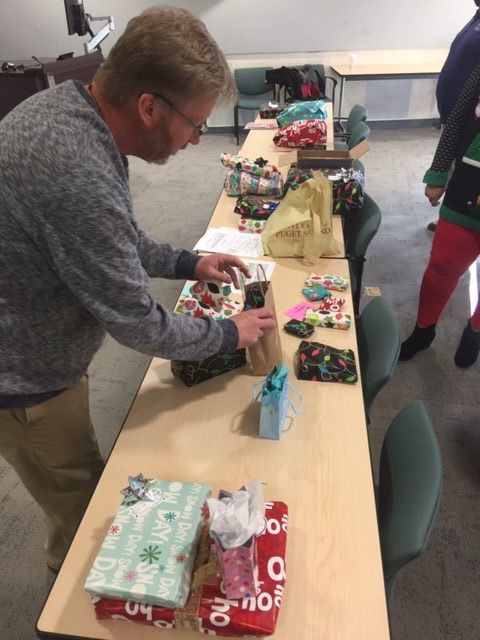 Dan Stoffel places a donation in a gift bag during the Dec. 13 SPAC meeting/wrapping party. The employee organization sponsors local families every year. 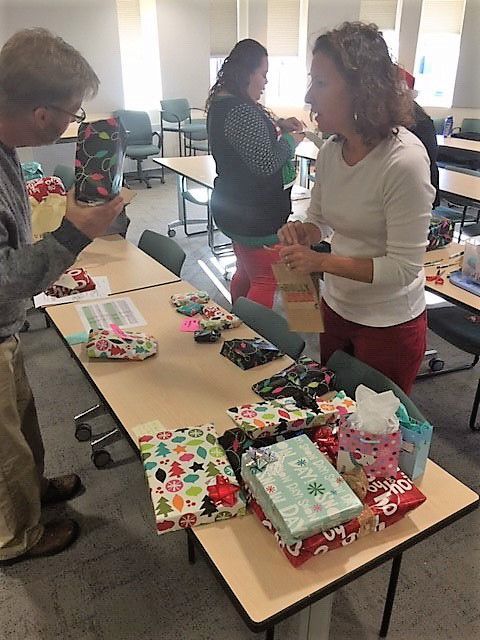 Northern Arizona University’s employee organizations gave back to the community this holiday season through service events to collect and donate needed items for the holidays. The Classified Staff Advisory Council (CSAC) held its annual winter clothing drive, while the Service Professionals Advisory Council (SPAC) “adopted” two local families for the holidays, collecting presents for them in time for Christmas.

CSAC and SPAC were formed to represent two of NAU’s major work groups: classified staff and service professionals. In the absence of a union, these organizations act as the voice of their members for events and meetings concerning university employees. The Faculty Senate, representing the third work group, performs similar functions.

Judy Manor, CSAC president and assistant director of Campus Shuttle Services at NAU, said the event is always fun for participating employees and students, and is greatly appreciated by the receiving nonprofits, who collected the donations the first week of November in preparation for impending winter temperatures.

“They were so excited,” Manor said of the nonprofits. “I actually got several texts and phone calls afterwards as they were sorting through the stuff, thanking us for the generous donations.”

SPAC also stepped outside its duties as an employee advocacy group to help the Flagstaff community again this year by sponsoring two families in need of holiday presents who were selected by the Society of St. Vincent de Paul.

Prior to collecting donations, SPAC and the Society of St. Vincent de Paul worked together to determine various characteristics of the two families – including ages, clothing and shoe sizes, as well as any specific gift requests.

The group also reached out to CSAC this year, in case they also wanted to contribute, said Kirk Fitch, SPAC chair and director of Clery Compliance for the NAU Police Department.

A total of seven children from ages 2 to 14 years old received bicycles, clothing, toys, school supplies, headphones and sports equipment from more than 20 participants. The families also received gift cards to Walmart, Safeway and Harkins. During its regular December meeting, SPAC members held a “wrapping party” to prepare and deliver the gifts.

In addition to this annual event, SPAC’s community outreach also includes its adopt-a-trail cleanups, which occur once each semester. The SPAC trail is located at the corner of East Jen Drive and East Pine Knoll Drive, a half mile east of the Walkup Skydome.

On campus, Fitch says SPAC helps out other members of the university wherever it can; this year, for example, members helped serve food at the freshman orientation sessions.

Although CSAC and SPAC were designed to advocate for different employee groups, they often work together for the benefit of people outside the NAU community, like the recipients of this year’s donations.

“I’m pleased that both the Service Professionals Advisory Council and the Classified Staff Advisory Council work so closely together for these two projects,” Fitch said. “It’s not all about employee benefits; we’re benefiting both the campus and the community. It’s good to see those projects going on.”

Flagstaff organizations based on giving thrive during the holidays

The Christmas season reflects the spirit of giving, with a spotlight on two of the biggest organizations in northern Arizona: Arizona Communit…

Affordable housing is an issue that has held center stage in local political dialogue for several years, and with Christmas comes a renewed fo…

The Arizona Community Foundation of Flagstaff presented $1.7 million in grants on Monday at High Country Conference Center to local nonprofit …

Like a missing puzzle piece restored, Northern Arizona University’s new School of Music facility fits snugly between the Performing and Fine A…

It can be difficult for many to see past what is on their own plate. For Northern Arizona University students and staff involved with Louie’s …

Service Professionals Advisory Council members pose with the wrapped donations that were collected for two local families earlier this month.

Dan Stoffel places a donation in a gift bag during the Dec. 13 SPAC meeting/wrapping party. The employee organization sponsors local families every year.