There is a new world record for the tallest Mohican mohawk, and it will give you all kinds of hair envy.

Joseph Grisamore, of Park Rapids, Minnesota, checks in with a mohawk fan over 42.5 inches tall, the Guinness Book of World Records said on their website.

"My favorite thing about the mohawk is just the rarity of it," Grisamore told Guinness.

"I'll admit that peoples' reactions are pretty priceless too. I'm 6-foot-1 tall, and my mohawk is pushing 4 feet now."

Grisamore said that he doesn't even use that much product. Usually he gets his hair stylist to tease the base so it can basically stand on its own.

"Doors aren't over 7-foot tall, ceilings 9-foot, and cars are impossible to get into — so I'm limited to where and how I move around when I'm all done up, but the crowd usually comes to me," he said.

Grisamore wanted to break this record back in 2007 but was too afraid to shave the sides of his hair in order to qualify for the record.

He decided to try again and grew his hair to four feet in seven years, allowing him to break the record, according to the news release.

However, Grisamore doesn't always wear his hair high. He works as an essential worker at a health care facility and usually keeps it braided and in two knots as to avoid sitting on it.

"I'm honored to be added to a list of one-of-a-kind record holders," Grisamore said.

"My wife wants me to stay humble, but instead I'm considering becoming the 'Mohawk King', and attempting the tallest mohawk spike title, which is how I'd begun my journey with record-breaking in 2007."

His accomplishment will be featured in the 2021 Guinness Book of World Records.

Most mayonnaise eaten in 3 minutes

This record, shockingly, belongs to a 112-pound woman. Michelle "Cardboard Shell" Lesco downed three-and-a-half jars of the divisive condiment in just three minutes. That's over FIVE POUNDS of mayonnaise consumed in the length of the average pop song.

Is she being forced to do this? Couldn't she have slurped five pounds of soup instead? It's harrowing to watch this woman gobble an obscene amount of mayonnaise. Sure, it earned her a world record, but AT WHAT COST?

Demolishing food is Lesco's livelihood. The competitive eater is ranked 10th in the world in Major League Eating. She also holds the more appetizing world record for fastest time to eat a bowl of pasta at 26.69 seconds.

Sweet, sweet Humphrey the miniature zebu stands just over two feet tall. Joe and Shelly Gardner bought the petite bull at an auction in Iowa in 2017, and he was so wee they didn't realize he was already 2 years old.

The diminutive bull spent his days eating and hanging out with much bigger cattle. If there were an award for world's cutest zebu, he'd win it in a heartbeat.

Shelly told CNN Humphrey passed away earlier this year, so he's holding the record now in the Great Beyond.

Most candles extinguished by nunchucks in one minute

Xie Desheng snuffed out 52 open flames with nothing but ninja-like precision. He just whacks the tip of the candles with his nunchucks. His grace under fire (ha) deserves praise.

New record: Most candles extinguished by a nunchaku in one minute - 52. China's Xie Desheng snuffed out this impressive record title with pinpoint accuracy 🕯️ pic.twitter.com/pGWkbw3n0G

Snoop Dogg fittingly presented a monstrous gin and juice at a Napa food festival in 2018, but no drink has managed to dethrone it yet. (There is the broader "largest cocktail" record, which went to a 10,500-gallon margarita in 2012.)

Guinness said the tropical drink contained 180 bottles of gin, 154 bottles of apricot brandy and 28 jugs of orange juice. It was garnished with a watermelon on a sword and a giant parasol, and it could've doubled as an alcoholic jacuzzi.

Greatest (gratest?) variety of cheese on a pizza

One might argue there is no amount of cheese on a pizza that could ever be considered "too much." Cheese, except to those who are lactose intolerant or vegan, is the music that makes plain pizza crust sing.

But let's be real — is 154 varieties of cheese on one pizza too much?

A pizzeria in Melbourne, Australia, holds the record for the amalgam of dairy. Just reading about it is enough to inspire a tummy ache for some.

A few questions: What could this possibly taste like? Are there only two shreds of each type of cheese on the pie to make them all fit? How does one crust carry the weight of it all?

Its creator Johnny Di Francesco told Guinness he was inspired by Donatello (as in the Teenage Mutant Ninja Turtle, not the renowned Renaissance sculptor) who once said that a pizza with 99 cheeses would be a "culinary impossibility." Should it have stayed that way?

Longest hair on a teenager

A good haircut can change your mood. A bad haircut might earn you a record-breaking feat.

Nilanshi Patel, a 16-year-old from Gujarat, India, vowed to never again cut her hair after a disastrous 'do at 6 traumatized her. Now her locks are 5 feet, 7 inches — longer than she is.

She told Guinness it takes her about an hour and a half to dry and comb all the way through. And she likes it that way.

Long hair don’t care 💁 Meet teen Nilanshi Patel who has set the record for the longest hair on a teenager, with locks 170.5 cm long > https://t.co/iRX6R1kI0I

Full-handed pull ups are already impressive. So why would anyone try doing them with their weakest digit?

Tazio Gavioli of Cavezzo, Italy, did. 36 times, per the 2020 record book. That's just 32 fewer pull ups than the man who holds the record for most pull ups in one minute. But cut Gavioli some slack; he's working with eight less fingers.

Guinness said he took up the thankless task to show solidarity for his cat that lost its paw in an accident. Carrying the kitty on his shoulders while completing the pull-ups would've made victory that much sweeter.

Lukas Bates didn't crack this record, attempted during April's London Marathon. His Big Ben costume, while patriotic, was ultimately too tall to make it under the finish line banner in time. But it sure was funny to watch him bumbling down the street without arm holes. No word on which landmark beat him.

However, there WERE winners who broke records for fastest marathon run in oddly specific costumes, including a woman dressed as a nut, a male nun and a man dressed as an astronomical body. Because if you try something odd, it might just be a world record. 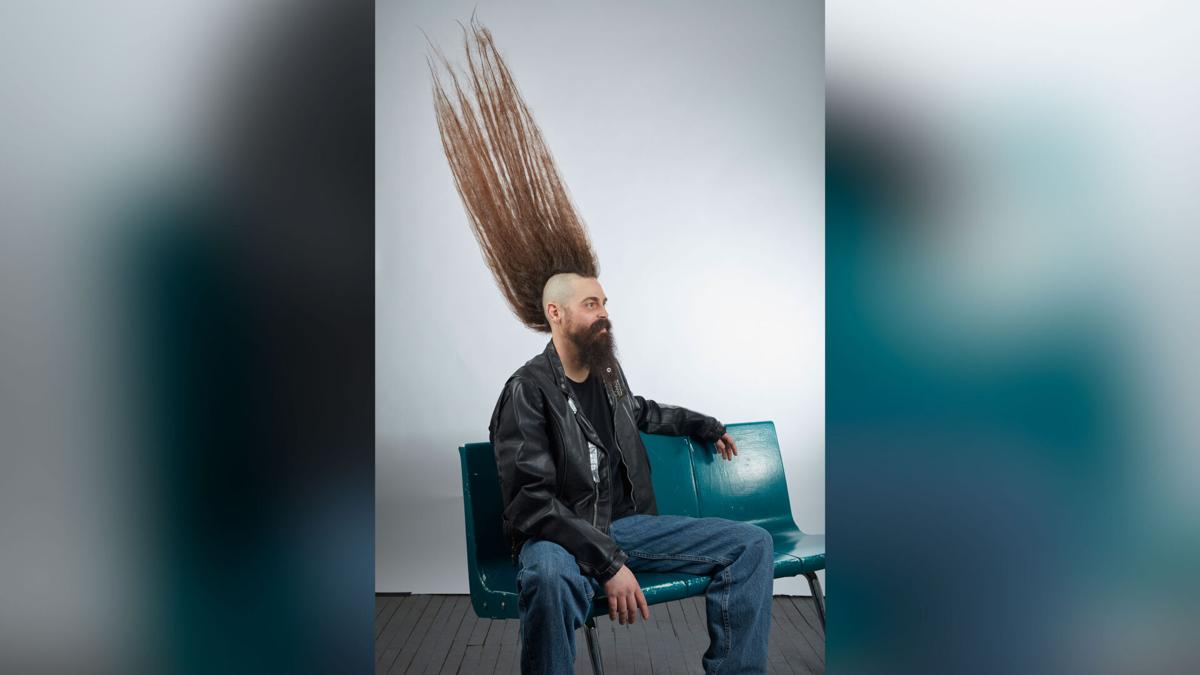 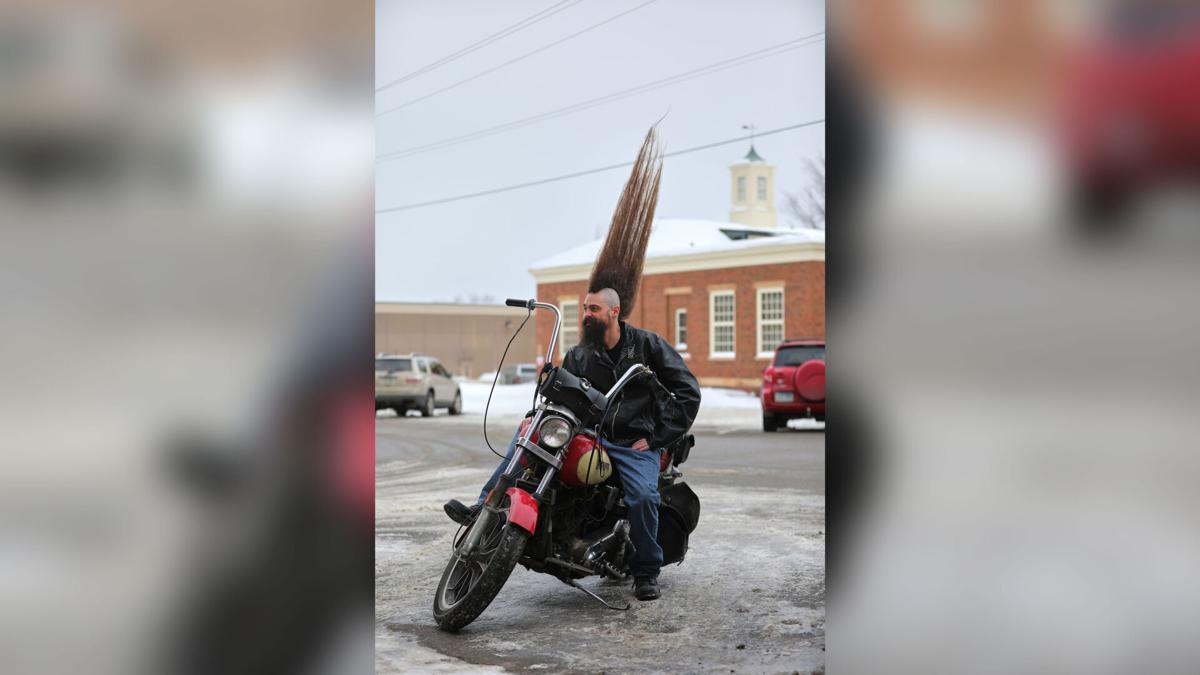 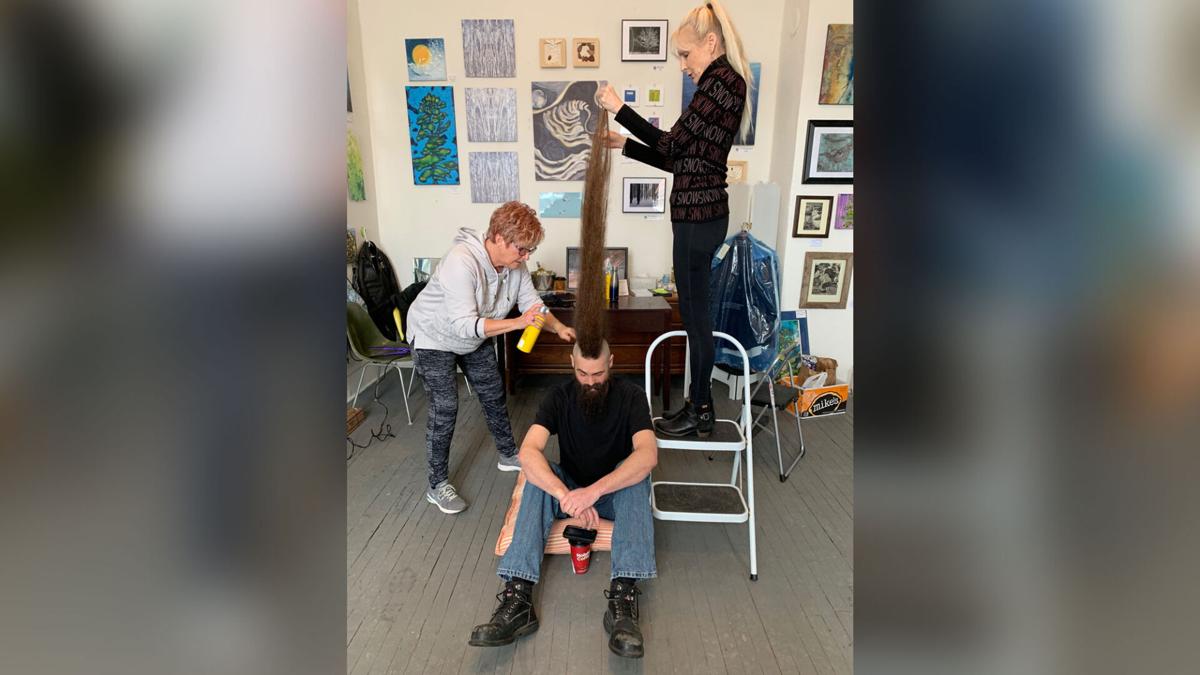 Grisamore says that he uses mininmal product on his record setting hair.