It's a dramatic change from last Saturday, when the number peaked as migrants driven by confusion over the Biden administration's policies and misinformation on social media converged at the border crossing connecting Del Rio, Texas, and Ciudad Acuña, Mexico.

Many face expulsion because they are not covered by protections recently extended by the Biden administration to the more than 100,000 Haitian migrants already in the U.S., citing security concerns and social unrest in the Western Hemisphere's poorest country. The devastating 2020 earthquake forced many of them from their homeland.

The United States and Mexico appeared eager to end the increasingly politicized humanitarian situation that prompted the resignation of the U.S. special envoy to Haiti and widespread outrage after images emerged of border agents maneuvering their horses to forcibly block and move migrants.

On Friday, President Joe Biden said the way the agents used their horses was "horrible" and that "people will pay" as a result. The agents have been assigned to administrative duties while the administration investigates.

Meanwhile, Homeland Security officials said about 2,000 Haitians have been rapidly expelled on 17 flights since Sunday and more could be expelled in coming days under pandemic powers that deny people the chance to seek asylum.

Department of Homeland Security Secretary Alejandro Mayorkas said Friday that the U.S. has allowed about 12,400 to enter the country, at least temporarily, while they make claims before an immigration judge to stay in the country under the asylum laws or for some other legal reason. They could ultimately be denied and would be subject to removal.

Mayorkas saidabout 8,000 migrants "have decided to return to Mexico voluntarily," and about 5,000 are in DHS custody and being processed to determine whether they will be expelled or allowed to press their claim for legal residency.

A U.S. official with direct knowledge of the situation said seven flights were scheduled to Haiti on Friday, six on Saturday and seven on Sunday. The official was not authorized to speak publicly.

In Mexico, just over 100 migrants, most of them single men, remained Friday morning in the riverside camp in Ciudad Acuña.

Dozens of families who had been there crossed back to Del Rio overnight after Mexican authorities left the area. With the river running higher, some Border Patrol agents helped families who were struggling to cross with children.

Some migrants also moved to small hotels or private homes in Ciudad Acuña. Authorities detained six migrants at one on Thursday afternoon.

Luxon, a 31-year-old Haitian migrant who withheld his last name out of fear, said he was leaving with his wife and son for Mexicali, about 900 miles west along Mexico's border with California.

"The option was to go to a place where there aren't a lot of people and there request documents to be legal in Mexico," he said.

Asked about the situation in Ciudad Acuña on Friday, Mexico President Andrés Manuel López Obrador said, "we don't want Mexico to be a migrant camp, we want the problem to be addressed fully."

At the Val Verde Border Humanitarian Coalition in Del Rio, migrants stepped off a white Border Patrol van on Friday, many smiling and looking relieved to have been released into the U.S. Some carried sleeping babies. A toddler walked behind her mother wrapped in a silver heat blanket.

A man who'd driven almost 1,500 miles from Toledo, Ohio, hoping to pick up a friend and her family wore a neon yellow vest and quietly scanned the line of Haitian migrants. Dave, who didn't want to share his last name, didn't see them in this group.

"I feel like my friend is worth my time to come down and help," he said, explaining that he wore the vest so his friend — a nurse whom he'd met on a humanitarian trip to Haiti over a decade ago — would be able to spot him in the crowd when she arrived with her husband and 3-year-old daughter.

"I just see it as an opportunity to serve somebody," said Dave, who considers himself a Trump supporter but hates how politicized the immigration issue has become. "We have so much."

Lozano, the Del Rio mayor, said the international bridge won't reopen until Sunday night at the earliest, while officials ensure nobody is hiding in the brush along the Rio Grande and to finish cleanup. Officials also want to be sure no other large groups of migrants are making their way to the Del Rio area who might decide to set up a similar camp, he said.

Lozano said there were no deaths during the time the camp was occupied and that 10 babies were born to migrant mothers, either at the camp or in Del Rio's hospital.

"It took an urban village at this scale to help prevent any loss of life and actually welcome the births of children here," Lozano said.

The government has no plans to stop expelling some migrants on public health grounds despite pressure from Democratic lawmakers, who say Haitian migrants are being sent back to a troubled country that some left more than a decade ago.

The Trump administration enacted the policy, called Title 42, in March 2020 to justify restrictive immigration policies in an effort to prevent the spread of the coronavirus. The Biden administration has used it to justify the deportation of Haitian migrants.

A federal judge late last week ruled that the rule was improper and gave the government two weeks to halt it, but the Biden administration appealed.

Officials said the U.S. State Department is in talks with Brazil and Chile to allow some Haitians who previously resided there to return, but it's complicated because some of them no longer have legal status there.

Foote, who was appointed in July, wrote to Secretary of State Antony Blinken, saying he was stepping down immediately "with deep disappointment and apologies to those seeking crucial changes," and said some of his policy recommendations had been ignored.

The humanitarian group UNICEF also condemned the expulsions, saying Thursday that initial estimates show more than two out of three migrants expelled to Haiti are women and children, including newborns.

"Haiti is reeling from the triple tragedy of natural disasters, gang violence and the COVID-19 pandemic," said Henrietta Fore, UNICEF's executive director, who said those sent back without adequate protection "find themselves even more vulnerable to violence, poverty and displacement — factors that drove them to migrate in the first place."

And Civil Rights leader Rev. Al Sharpton, who toured the camp on Thursday, vowed to "stand with our people and make sure asylum is treated in one way and one manner."

U.S. health advisers said Thursday that some Americans who received Moderna's COVID-19 vaccine should get a half-dose booster to bolster protection against the virus.

Colin Powell, military leader and first Black US secretary of state, dies at 84

Colin Powell, the first Black US secretary of state who helped shape American foreign policy for decades, has died of complications from Covid-19, his family said.

Former President Trump sought to block the release of documents related to the Jan. 6 riot to the congressional committee investigating the attack.

Police: Woman raped on Pennsylvania train as bystanders did nothing

A woman was raped by a stranger on a Philadelphia area train in the presence of other riders who a police official said "should have done something."

""They set out to do it, and they did it," the superintendent said. "It has no place in high school athletics."

The gunman who killed 14 students and three staff members at a Parkland, Florida, high school will plead guilty to their murders, his attorneys said Friday.

New York real estate heir Robert Durst was sentenced Thursday to life in prison without chance of parole for the murder of his best friend more that two decades ago.

The coronavirus has become the leading cause of death for officers despite law enforcement being among the first groups eligible to get the vaccine. 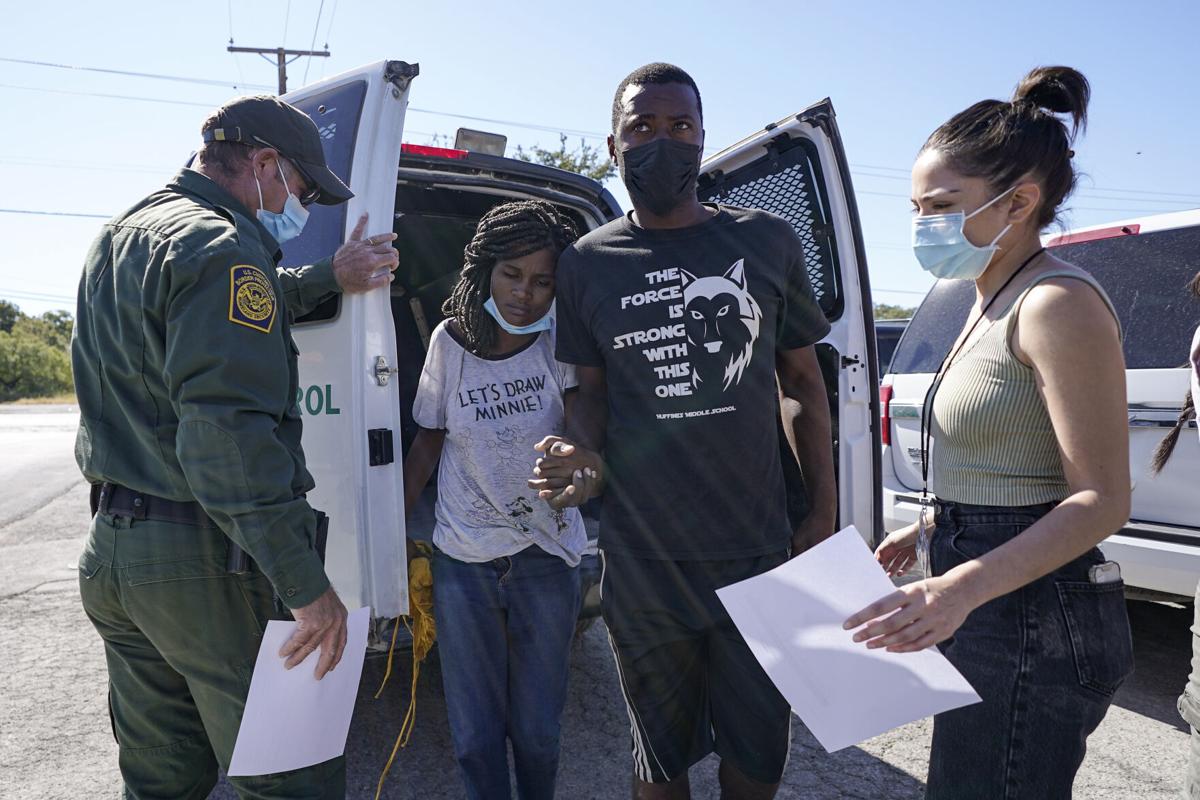 A U.S. Customs and Border Protection agent, left, drops off a migrant couple a member of of a humanitarian group, right, receives them after their release from custody, Friday, Sept. 24, 2021, in Del Rio, Texas. (AP Photo/Julio Cortez) 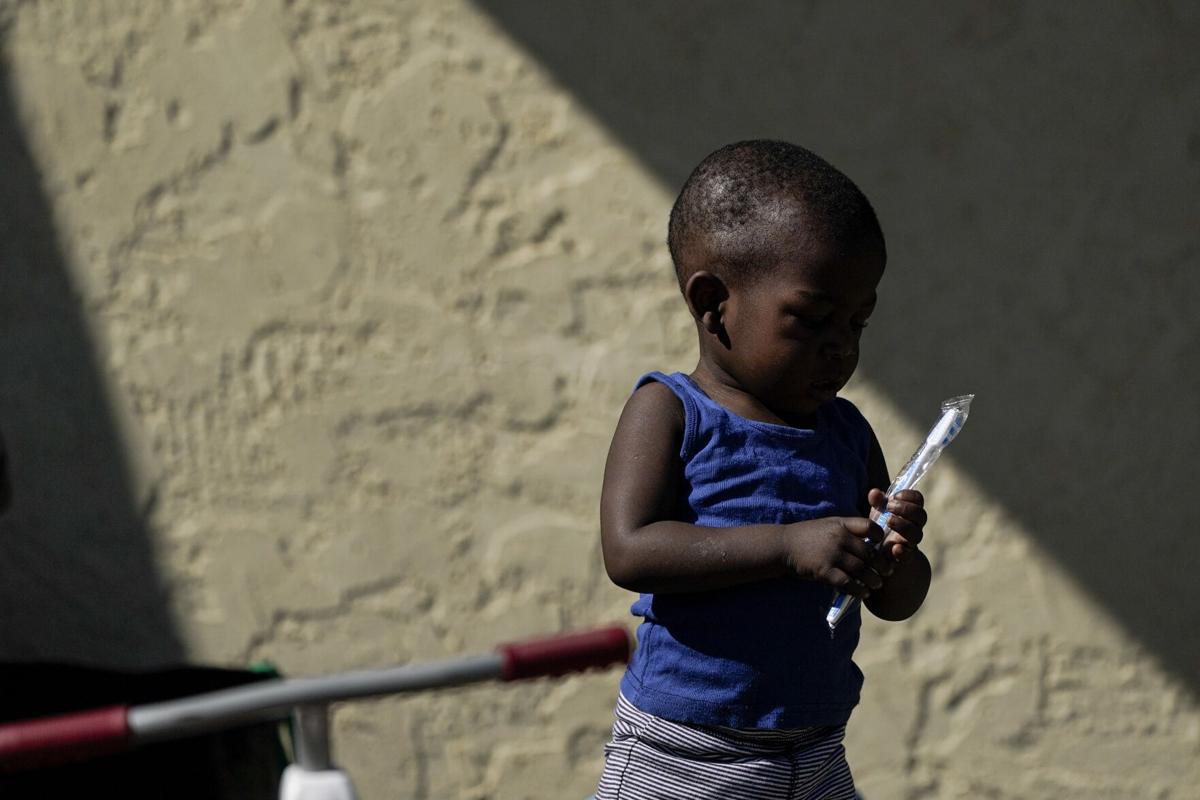 A Haitian migrant boy holds a toothbrush as he waits with his father to board a bus to Houston provided by a humanitarian group after they were released from U.S. Customs and Border Protection custody, Friday, Sept. 24, 2021, in Del Rio, Texas. (AP Photo/Julio Cortez) 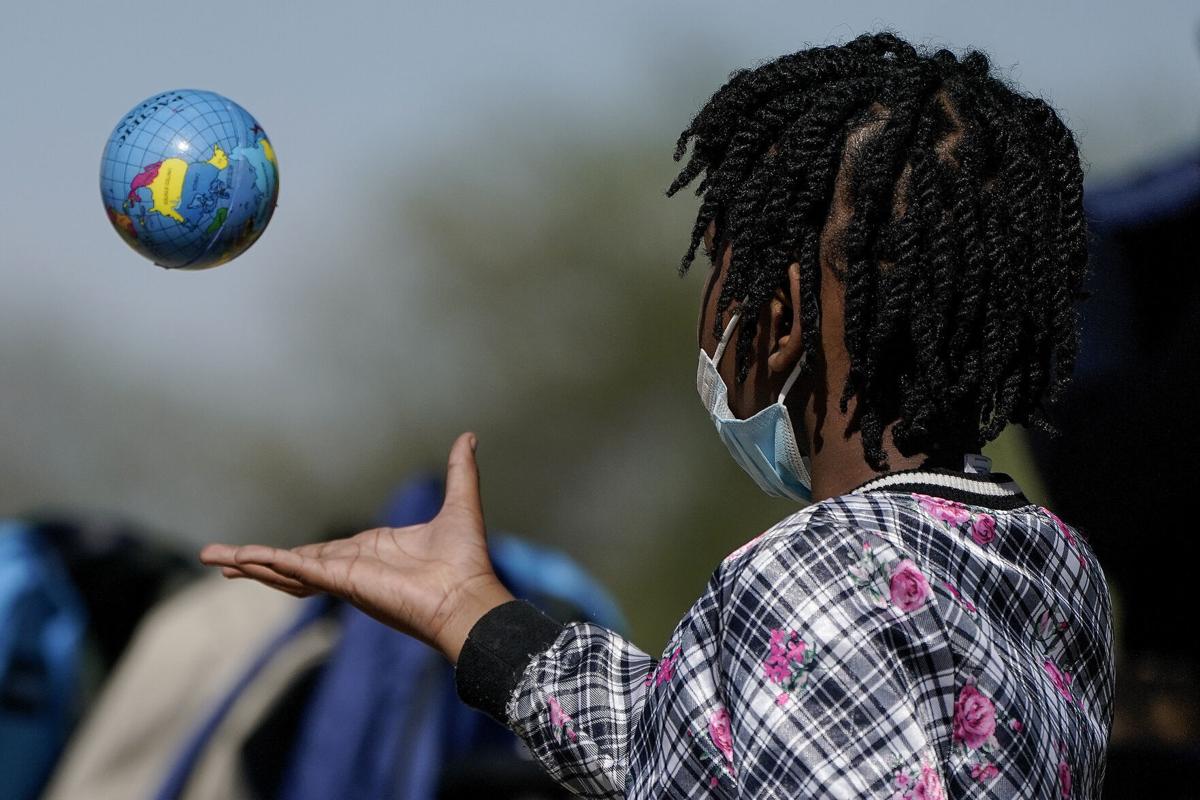 A Haitian migrant girl plays with a ball in the shape of a globe while waiting to board a bus to Houston provided by a humanitarian group after she and her family were released from U.S. Customs and Border Protection custody, Friday, Sept. 24, 2021, in Del Rio, Texas. (AP Photo/Julio Cortez) 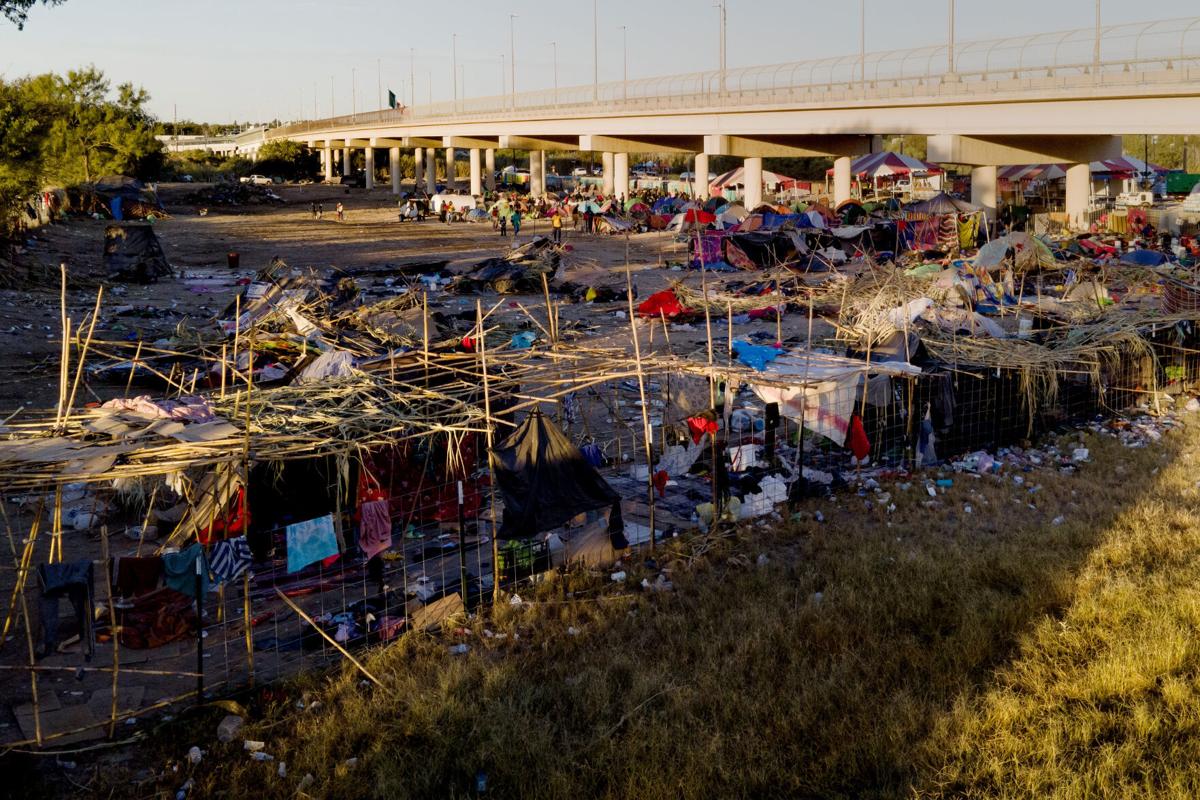 Migrants, many from Haiti, are seen in an encampment near the Del Rio International Bridge, Friday, Sept. 24, 2021, in Del Rio, Texas. (AP Photo/Julio Cortez) 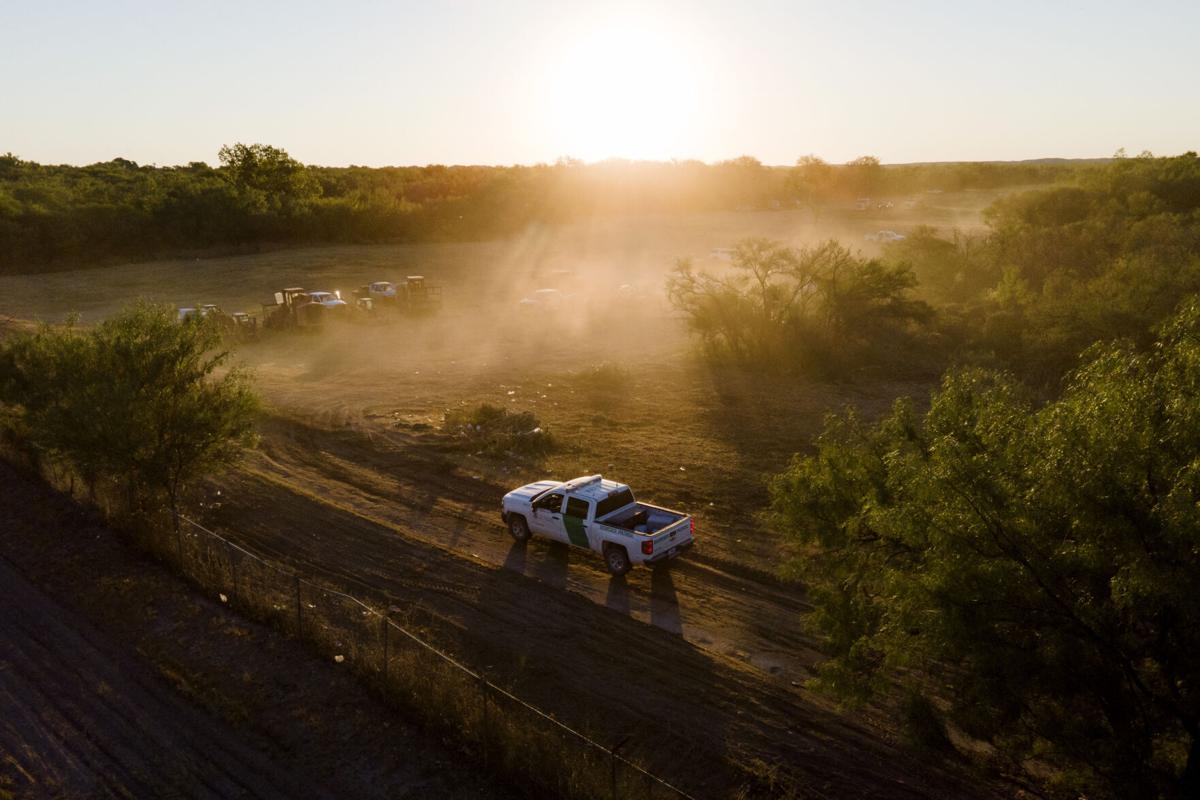 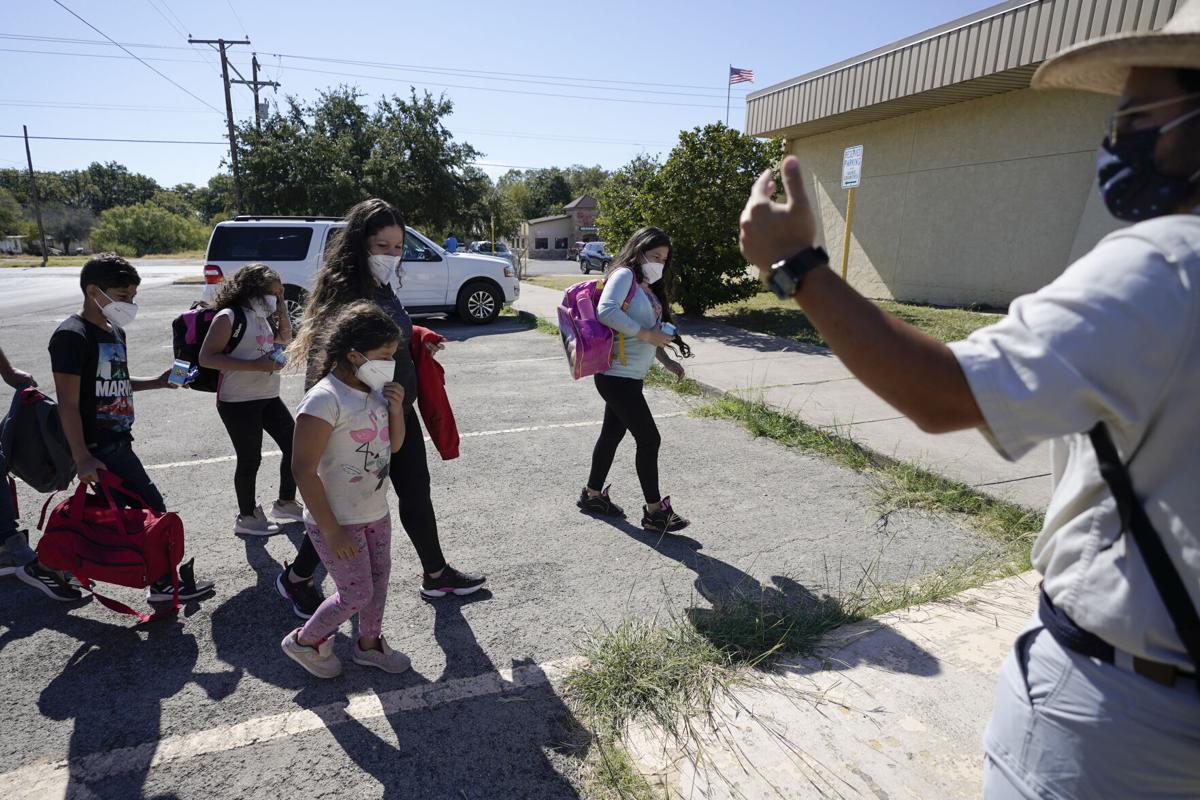 A member of a humanitarian group, right, greets migrants after they were released from U.S. Customs and Border Protection custody, Friday, Sept. 24, 2021, in Del Rio, Texas. (AP Photo/Julio Cortez) 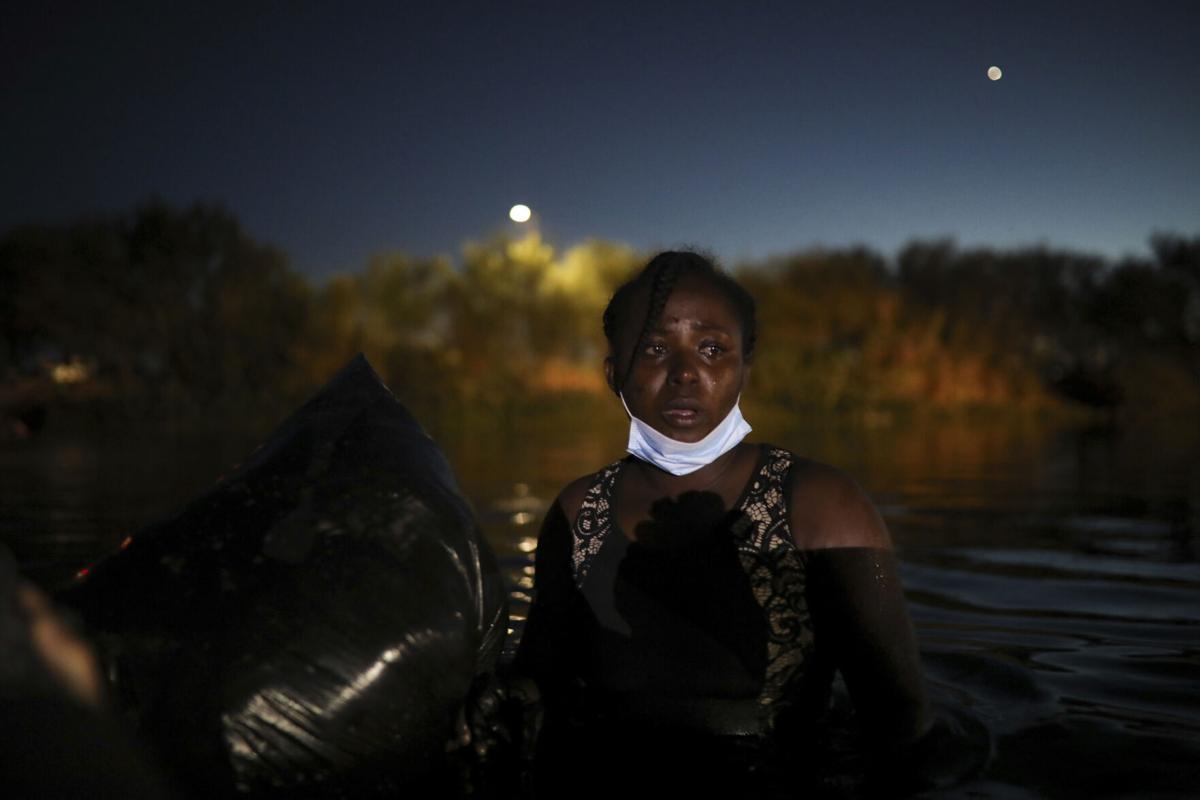 The migrant mother of a child that was rescued by United States agents from the waters of the Rio Grande after she lost her footing and the child began to be swept away by the current, cries after she too was helped ashore on the American side of the border between Ciudad Acuña, Mexico, and Del Rio, Texas Thursday, Sept. 23, 2021. (AP Photo/Felix Marquez) 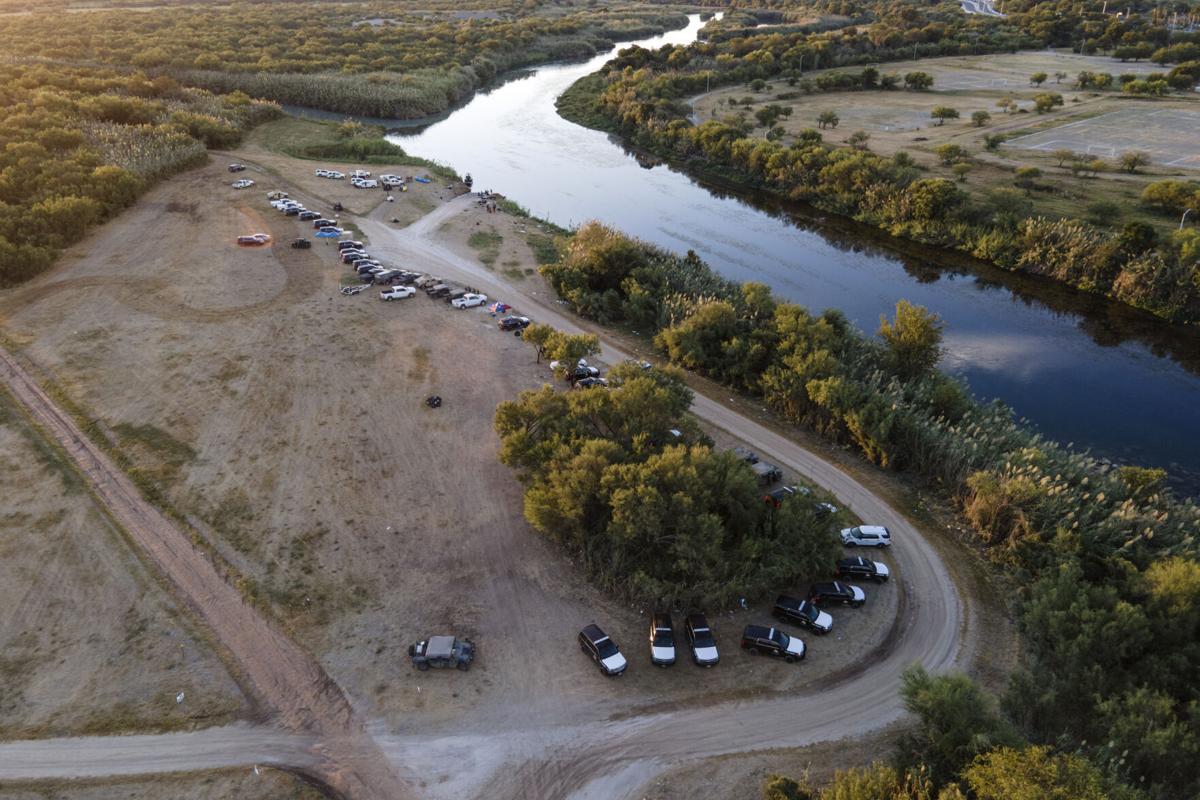