Here are today's top stories, celebrity birthdays and a look back at this date in history:

WASHINGTON (AP) — Democrats brushed aside monthslong divisions and approached House passage of their expansive social and environment bill Friday, as President Joe Biden and his party neared a defining win in their drive to use their control of government to funnel its resources toward their domestic priorities.

Final passage, which had been expected Thursday, was delayed as Minority Leader Kevin McCarthy, R-Calif., held it up with an hourslong broadside criticizing Biden, Democrats and the bill. Most Democrats abandoned the chamber after midnight with McCarthy still talking, and House Majority Leader Steny Hoyer, D-Md., told reporters that leaders planned for passage later Friday.

House approval was still expected on a near party-line vote. That would send the measure to a Senate where cost-cutting demands by moderate Sen. Joe Manchin, D-W.Va., and that chamber’s strict rules seem certain to force significant changes. That will prompt fresh disputes between party centrists and moderates that will likely take weeks to resolve.

Keep scrolling for links to full versions of these top stories and more.

A surge in cases in the Upper Midwest has some Michigan schools keeping students at home ahead of Thanksgiving and the military sending medical teams to Minnesota to relieve hospital staffs overwhelmed by COVID-19 patients.

The worsening outlook in the Midwest comes as booster shots are being made available to everyone in a growing number of locations. Massachusetts and Utah became the latest to say anyone 18 or older can roll up a sleeve for a booster shots, and an advisory committee for the Centers for Disease Control and Prevention is meeting Friday to discuss expanding boosters.

Cold weather states are dominating the fresh wave of cases over the last seven days, including New Hampshire, North Dakota and Wisconsin, according to federal data. But the Southwest had trouble spots, too, with more than 90% of inpatient hospital beds occupied in Arizona.

TAMPA, Fla. (AP) — A detective in Florida investigating the disappearance of Carole Baskin's second husband said Thursday that the “Tiger King” star had three times refused requests for interviews, and that the probe was ongoing.

Cpl. Moises Garcia of the Hillsborough County Sheriff's Office in Tampa held a news conference to provide an update on the investigation into Don Lewis' disappearance. The case was reopened following the March 2020 release of “Tiger King: Murder, Mayhem and Madness,” a Netflix documentary series which became a huge hit during the pandemic.

Lewis was a Tampa millionaire who vanished in 1997, leaving Baskin with dozens of big cats at their animal sanctuary. The series launched rumors about how Lewis disappeared, including conjecture that he was buried in a septic tank on the sanctuary's property or living in Costa Rica.

Click on the links below for full version of today's top stories. Keep scrolling for a look back at this day in history and today's celebrity birthdays:

WASHINGTON (AP) — A fractious House handed President Joe Biden a marquee victory Friday by approving a roughly $2 trillion social and environment bill, as Democrats cast aside disputes that for months had stalled the measure and hampered efforts to sell their priorities to voters.

A surge in cases in the Upper Midwest has some Michigan schools keeping students at home ahead of Thanksgiving and the military sending medical teams to Minnesota to relieve hospital staffs overwhelmed by COVID-19 patients.

BRUNSWICK, Ga. (AP) — Defense attorneys rested their case in the Ahmaud Arbery trial Thursday after calling just seven witnesses, including the shooter, who testified that Arbery did not threaten him in any way before he pointed his shotgun at the 25-year-old Black man.

KENOSHA, Wis. (AP) — Kyle Rittenhouse was acquitted of all charges Friday after testifying he acted in self-defense in the deadly Kenosha shootings that became a flashpoint in the debate over guns, vigilantism and racial injustice in the U.S.

WASHINGTON (AP) — Reviving three-way North American summitry after a five-year break, President Joe Biden on Thursday joined with the leaders of Canada and Mexico to declare their nations can work together and prove “democracies can deliver” even as they sort out differences on key issues.

OKLAHOMA CITY (AP) — Oklahoma's governor spared the life of Julius Jones on Thursday, just hours before his scheduled execution that had drawn widespread outcry and protests over doubts about his guilt in the slaying of a businessman more than 20 years ago.

NEW YORK (AP) — More than half a century after the assassination of Malcolm X, two of his convicted killers were exonerated Thursday after decades of doubt about who was responsible for the civil rights icon’s death.

NEW YORK (AP) — Former President Donald Trump is endorsing Rep. Paul Gosar, one day after the Arizona Republican was censured by the House of Representatives for posting a violent cartoon video that depicted a character with his face killing one with New York Rep. Alexandria Ocasio-Cortez's.

TAMPA, Fla. (AP) — A detective in Florida investigating the disappearance of Carole Baskin's second husband said Thursday that the “Tiger King” star had three times refused requests for interviews, and that the probe was ongoing.

BEIJING (AP) — China’s Foreign Ministry stuck to its line Friday that it wasn’t aware of the controversy surrounding Peng Shuai, the tennis professional who disappeared after accusing a former top official of sexually assaulting her.

NEW YORK (AP) — Shohei Ohtani’s two-way season was so incredible, MVP voters filled out the top of their ballots only one way.

ATLANTA (AP) — Led by a defense that is downright nasty, the New England Patriots are suddenly playing with the swagger of their Tom Brady years.

IMAGE OF THE DAY

In 1969, Apollo 12 astronauts Charles Conrad and Alan Bean made the second manned landing on the moon, and more events that happened on this d…

More than 50 now dead in coal mine blast; plus other top news today

Finding other survivors is highly unlikely, officials said. In the U.S., weather may make post-Thanksgiving travel tricky, and hundreds of FedEx shipments have been found dumped in a ravine.

New COVID-19 variant spreads in Africa: What you need to know

It's unclear where the new variant actually arose, but a slew of nations moved to restrict travel from Africa. Here's what you need to know, plus more updates and the latest data on infections and vaccination.

Authorities say eight people were wounded in an attack at a Michigan high school in which three students were killed.

The latest on the new omicron variant: Two new cases confirmed in Britain as new restrictions are being placed on travel with each passing hour.

Two countries half a world apart become the latest to detect the new omicron variant in travelers arriving from southern Africa. Get the latest here.

Why WHO skipped 'nu,' 'xi' for new COVID variant

Social media users correctly noted that WHO skipped two letters, leading to questions about the move. Here are the facts.

What we know and don't know about the omicron variant

WHO says it could still take some time to get a full picture of the threat posed by omicron. Here's what we know — and what we don't.

Here's what you should know about this week's Supreme Court case over abortion, where Roe v. Wade is facing its most serious challenge in 30 years.

Vivid sunsets across the country bring a stunning close to November

Vivid sunsets across the country bring a stunning close to November 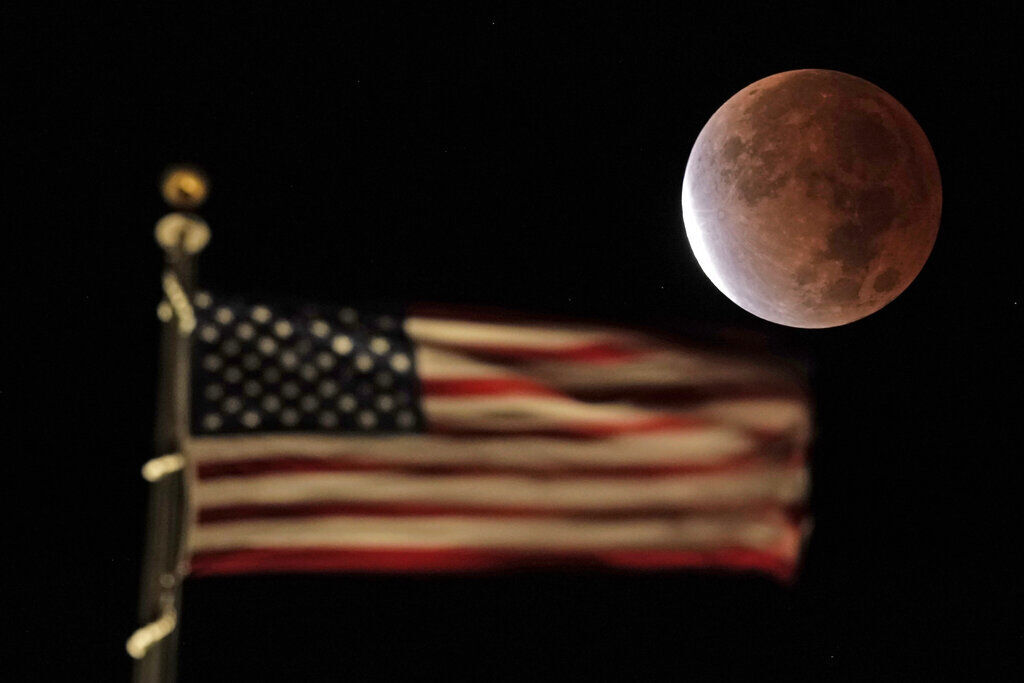 The earth's shadow covers the full moon during a partial lunar eclipse as it sets beyond the U.S. flag on top of a building, Friday, Nov. 19, 2021, in downtown Kansas City, Mo. 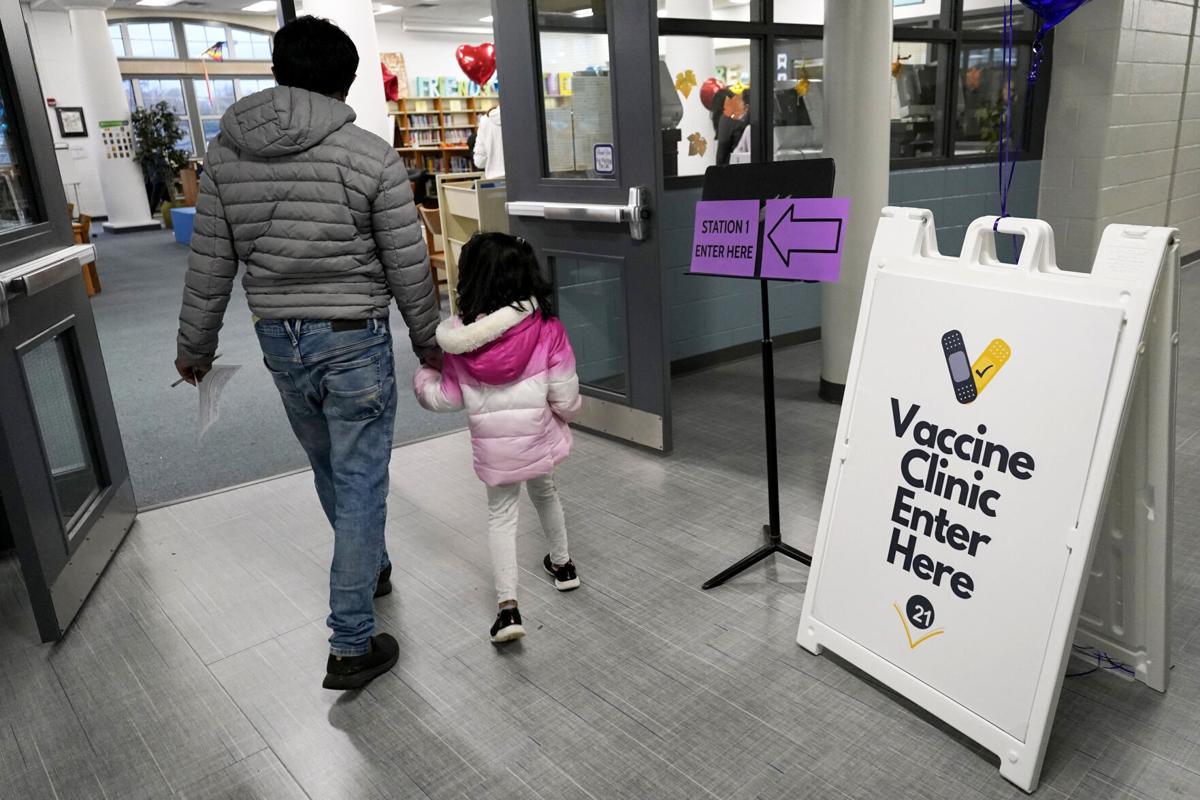 An information sign is displayed as a child arrives with her parent to receive the Pfizer COVID-19 vaccine for children 5 to 11-years-old at London Middle School in Wheeling, Ill., Wednesday, Nov. 17, 2021. 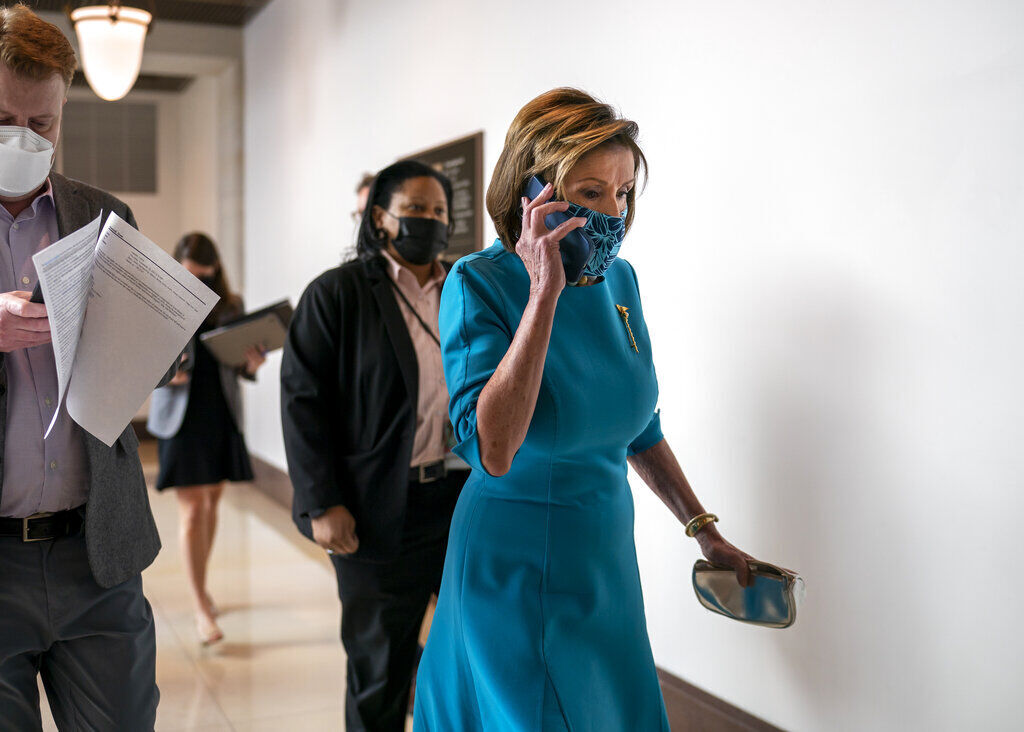 Speaker of the House Nancy Pelosi, D-Calif., walks to meet with reporters about plans to pass President Joe Biden's domestic agenda as the House meets to debate the "Build Back Better" Act, at the Capitol in Washington, Thursday, Nov. 18, 2021.