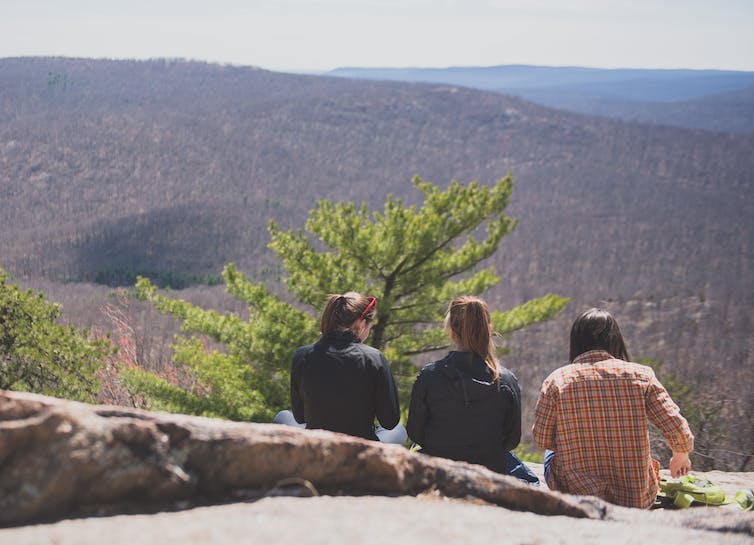 Each year, more than 6 million children in the United States are referred to Child Protective Services for abuse or neglect. Previous research on the consequences of early life stress and child maltreatment shows that these children will be more likely to develop a multitude of social and mental health problems. Teens and adults who experienced early adversity such as abuse, neglect or extreme deprivation are more likely to be socially isolated, spend time in jail, and develop psychological disorders including anxiety and depression.

Researchers have long puzzled over why early life stress is linked to such a wide variety of problems years later. Why do many of these problems emerge only in adolescence or even adulthood? These “sleeper effects” suggest early life stress might disrupt aspects of brain development that support key emotional and cognitive processes which normally promote positive social relationships and mental health.

Psychologists know that early life stress affects people’s ability to control or regulate their emotions and the brain regions that support these skills. For example, children who have experienced a lot of stress seem to have more difficulty containing negative emotions like anger or anxiety.

But emotion regulation might not be the whole story. Because early life stress is associated with such a wide array of later problems, it seems likely that these adverse experiences also affect some other very basic cognitive processes. My colleagues and I carried out a study to investigate. Our findings suggest that, beyond emotion, two general learning mechanisms are also affected by early life stress – and these have the potential to explain long-term effects of childhood adversity.

My colleagues and I decided to focus on two cognitive skills that are fundamental to how people function socially in the world.

The first is the ability to learn and update associations between one’s own actions and the outcomes that result from them — what psychologists call “instrumental learning.” A very simple example would be learning that when I ring the doorbell, someone comes to the door.

But ringing a doorbell doesn’t always result in someone coming to the door – maybe no one is home. So links between actions and outcomes depend on the context. In this study, we were also interested in how stress affects the ability to update one’s knowledge when circumstances change — what psychologists call “cognitive flexibility.” 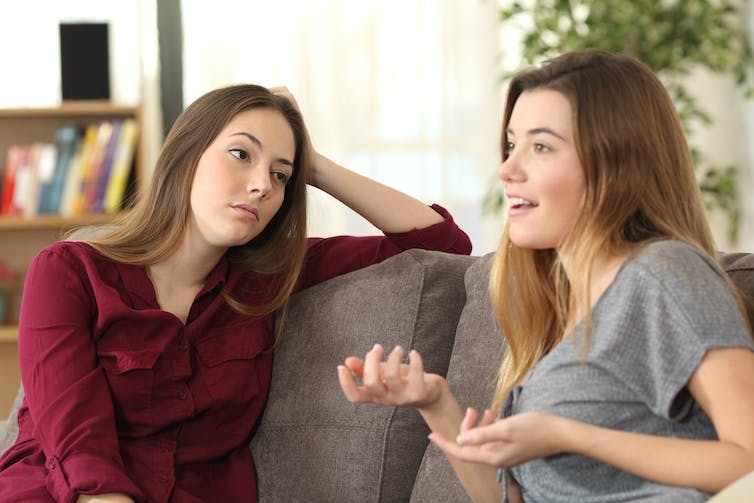 Part of having a successful social interaction is updating what you’re doing based on the feedback you’re receiving. Antonio Guillem/Shutterstock.com

Say I’m telling my friend about the last ultramarathon I ran, giving her a mile-by-mile recap. My friend might be really engaged at first, so I’d form a positive association between my chosen conversation topic and her enthusiasm. But eventually she might start to get bored – I can be pretty long-winded when I talk about running.

Hopefully I’ll notice this shift – my association between me talking and her reaction will change – and I’ll wrap up my recap. But if I repeatedly fail to pick up on signals that my conversation partner is losing interest in what I’m talking about, she might start taking more rain checks on our coffee dates.

The circumstances around you, including other people’s reactions to your behavior, are continually changing, and it’s good for you to be able to recognize these changes and adjust your behavior accordingly. If not, you’ll have trouble developing healthy social relationships. It’s these skills our study focused on.

Looking for effects of stress in the lab

My colleagues and I brought teenage participants – half of whom had been physically abused by their caregivers in early childhood – into our lab to investigate how they did on particular cognitive tasks.

We first tested whether adolescents who had been abused in early childhood were as good as their peers at linking their actions in context to rewards and punishments.

The teens viewed pictures of everyday objects, like a shoe or a broom. These are neutral objects that aren’t inherently good or bad, so in this task participants had to learn through experience whether each picture was linked to a reward or a punishment. Each time they saw a picture, they had the option to either press a button or do nothing. If they pressed the button, they would either win points or lose points. Some pictures led to a reward and others to a loss. If they didn’t press the button, nothing happened.

Halfway through the task, we switched things up. Because other studies found that children who experienced early life stress can have an especially hard time changing their responses, we were interested in our participants’ cognitive flexibility. Some of the pictures that had initially led to a reward now led to a loss and vice versa. This situation was akin to my friend getting bored with all my running stories. Participants needed to change their responses if they wanted to continue earning points. 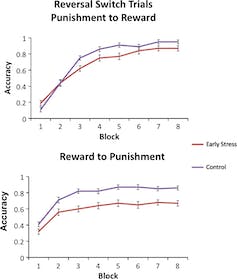 Children exposed to early life stress had difficulty learning what to do when images switched their associations. Harms et al. Developmental Science. 2017;e12596.

It turns out that teens who had been physically abused had more trouble with both parts of the task than their peers who had not been abused. Their difficulties were especially obvious when they had to change their responses. Once they had learned the links between context, action and outcome, they had a hard time updating and adjusting their behavior when the situation changed – like when an event that had been linked to reward became linked to punishment, or vice versa.

While teens worked on this task, my colleagues and I used functional magnetic resonance imaging to measure which areas of their brains were active. When abused teens saw pictures that led to reward, the putamen and anterior cingulate cortex – two regions of the brain that help people learn associations between their actions and outcomes – were less active. Interestingly, researchers have found similar patterns of reduced brain activity when reward is at stake in people who have psychological disorders such as depression.

Lingering effects – and how to counteract them

Put together, these research findings suggest that early adversity could affect how people learn to obtain rewards in their lives. It’s possible that stress disrupts the development of key brain regions that help people associate specific events or actions with positive or negative outcomes. Children exposed to early stress might therefore have trouble learning how to achieve positive outcomes in their lives, like doing well in school or making friends — and these problems likely cause additional stress.

As a result, these individuals might encounter fewer positive and more negative experiences even after the initial adversity has ended, and end up with higher risks for mental health problems like depression. Because these learning difficulties don’t go away once the stress ends, this pathway also helps explain the sleeper effects of early life stress that only show up a bit later in life.

If early life stress disrupts something as fundamental as basic learning, is there any hope for these kids? Yes. In fact, these studies suggest new ways researchers could think about creating interventions to help kids who’ve experienced early adversity. For example, carefully designed computer games could teach children to pay attention to rewards in their environment and to gather information about how to obtain these rewards.

Other interventions could target children’s abilities to deal with changing circumstances. In fact, programs like Big Brothers and Big Sisters, which seem to improve outcomes in at-risk kids might already work this way by exposing children to new environments and new people. Boosting children’s learning abilities in these ways might be an effective way to improve social and mental health outcomes.

Although society should strive to prevent children from being exposed to high levels of stress in the first place, new research on how exposure to stress affects learning can lead to more ways to help kids who have already experienced early adversity.

The boyfriend of slain cross-country traveler Gabby Petito admitted killing her in a notebook discovered near his body in a Florida swamp, the FBI said.

Two Texas brothers were arrested for allegedly beating their stepfather to death because they believed he was sexually abusing an underage family member, Pharr police said.

After years of caring for surgery patients at a Canadian hospital, a veteran nurse has left the profession to start a new, high-demand career as a long-haul truck driver.

Three studies released Friday offered more evidence that COVID-19 vaccines are standing up to the omicron variant, at least among people who received booster shots.

A 31-year-old man in need of a heart transplant in Boston cannot get one because he is not vaccinated against COVID-19. Health experts explain why.

Meat Loaf, 'Bat Out of Hell' rock superstar, dies at 74

Meat Loaf, whose "Bat Out of Hell" album is one of the all time bestsellers, has died at age 74.

As the free N95 masks begin to become available in parts of the U.S., here's what you need to know about getting one.