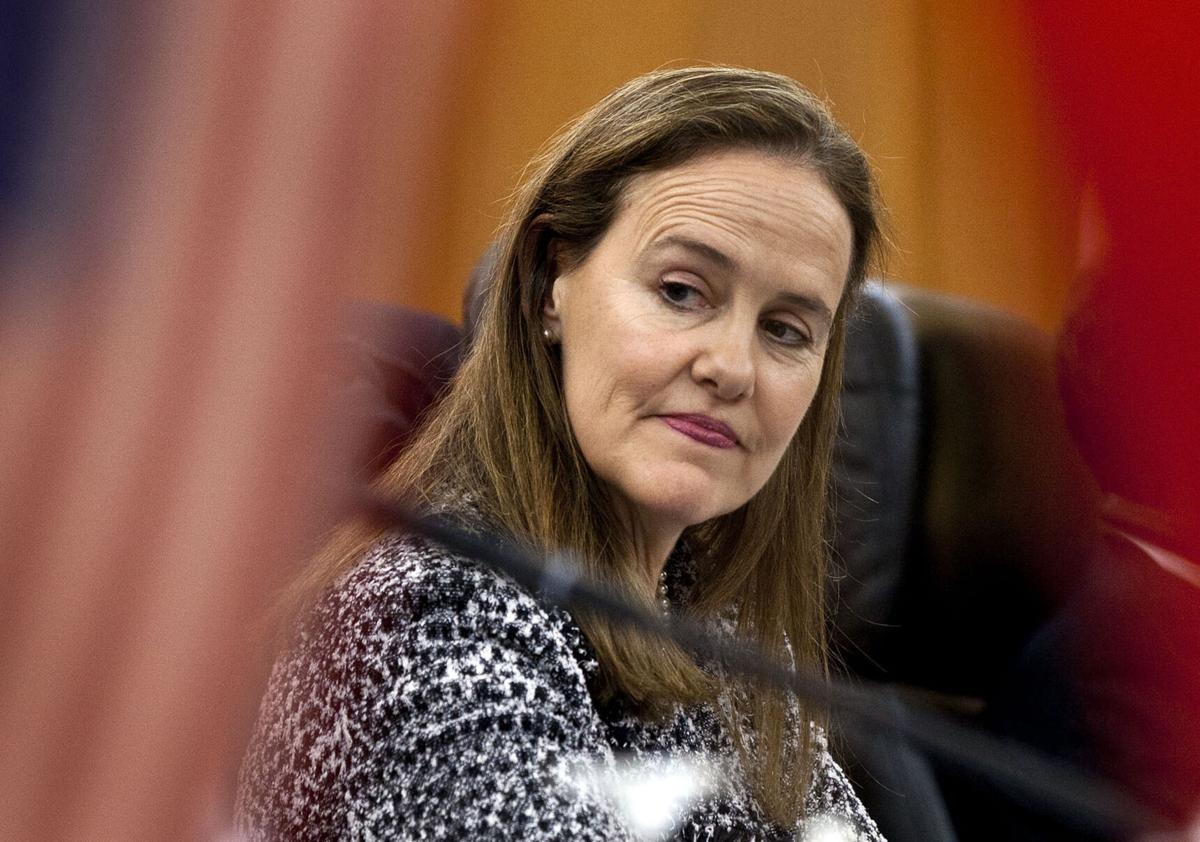 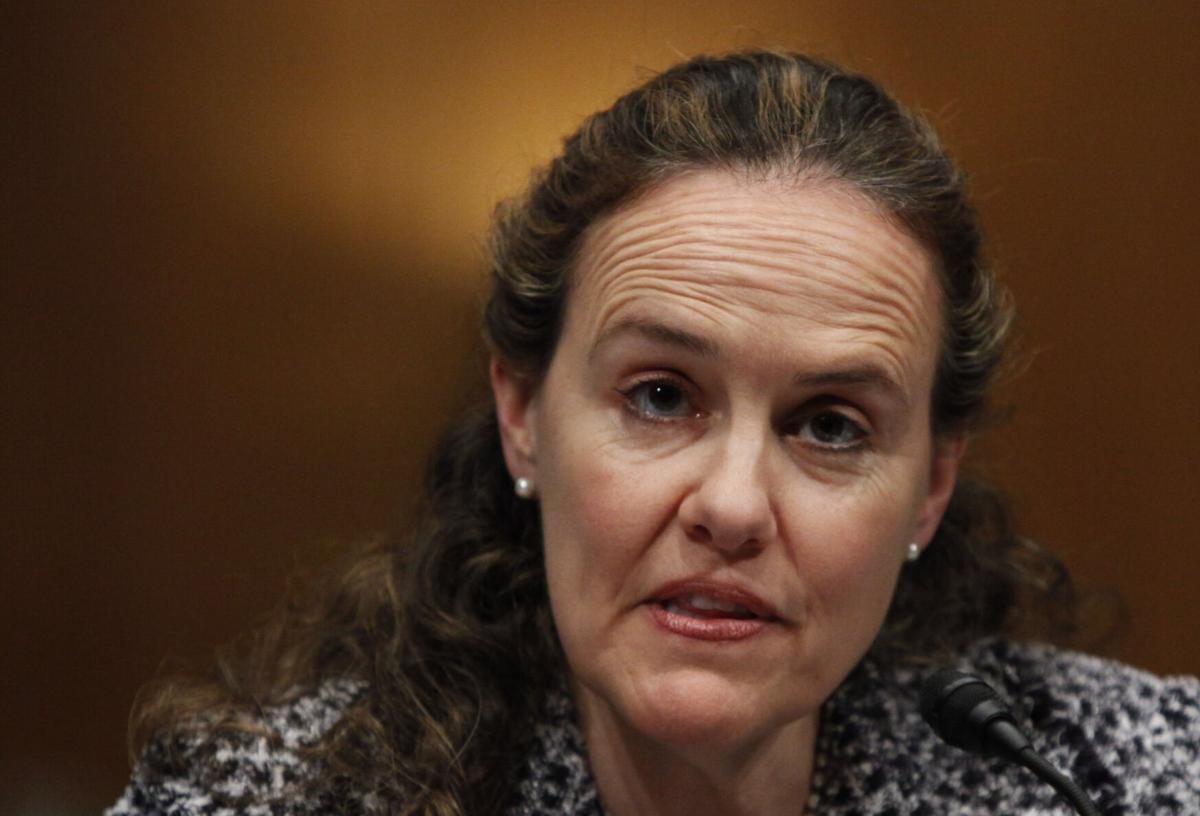 FILE - In this Feb. 22, 2010, file photo then-Defense Undersecretary for Policy Michele Flournoy testifies on Capitol Hill in Washington before the Senate Armed Services Committee hearing on Afghanistan. Flournoy, a politically moderate Pentagon veteran, is regarded by U.S. officials and political insiders as a top choice for President-elect Joe Bide to choose to head the Pentagon. (AP Photo/Manuel Balce Ceneta, File) 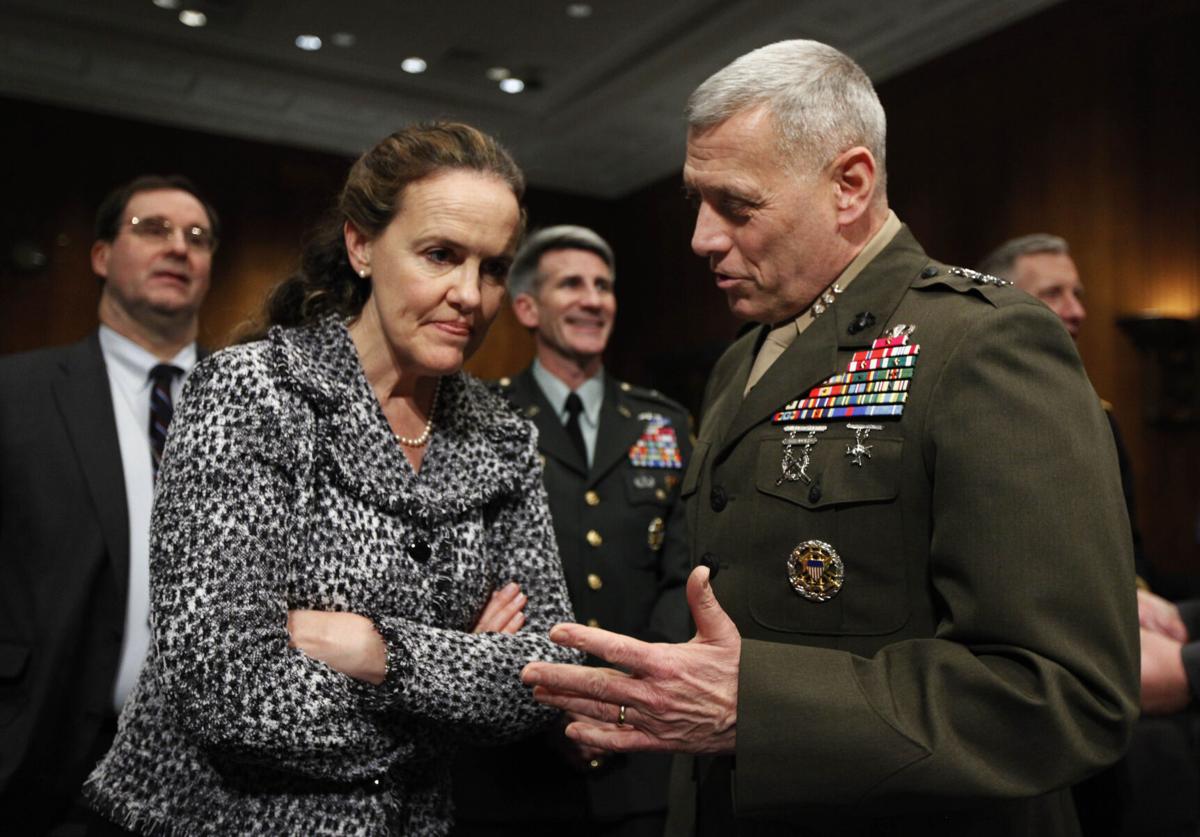 WASHINGTON (AP) — President-elect Joe Biden is expected to take a historic step and select a woman to head the Pentagon for the first time, shattering one of the few remaining barriers to women in the department and the presidential Cabinet.

Michele Flournoy, a politically moderate Pentagon veteran, is regarded by U.S. officials and political insiders as a top choice for the position.

Her selection would come on the heels of a tumultuous Pentagon period that has seen five men hold the top job under President Donald Trump. The most recent defense secretary to go was Mark Esper, who was fired by Trump on Monday after pushing back on issues including troop withdrawals and the use of the military to quell civilian unrest.

If confirmed, Flournoy would face a future that is expected to involve shrinking Pentagon budgets and potential military involvement in the distribution of a coronavirus vaccine.

Democrats have long sought to name a woman to the top post in a department that didn't open all combat jobs to female service members until about five years ago. Flournoy had been the expected choice of Hillary Clinton if she had won the 2016 election. Her name surfaced early as a front-runner for Biden's Cabinet, said officials who spoke on condition of anonymity to discuss personnel matters.

Seen as a steady hand who favors strong military cooperation abroad, Flournoy, 59, has served multiple times in the Pentagon, starting in the 1990s and most recently as the undersecretary of defense for policy from 2009 to 2012. She serves on the board of Booz Allen Hamilton, a defense contractor, which could raise concerns from some lawmakers. But her moderate views would likely ensure wide bipartisan support in a position that requires Senate confirmation.

Few other names have been mentioned, though former Department of Homeland Security chief Jeh Johnson was listed as a possible choice at one point. Choosing a woman would be consistent with Biden's pledge to have a diverse Cabinet.

She has been outspoken on American foreign and defense policy, particularly over the past year. She favors closer international cooperation after four years of a Trump White House that touted an "America First" policy and was more distrustful and critical of allies.

"Whoever the next president is," she said in March, "whether it's a second Trump term or Vice President Biden or whoever it is, one of the top agenda items is going to try to, I think, repair some of that perception" that America may no longer be a reliable partner. "But I don't think it's going to be easy or happen overnight. I think it's going to take a lot of work over a number of years to recover that trust and that standing."

She has also cautioned against drastic, immediate changes.

"One of the most dangerous tendencies is for — after a change of administration, particularly when there's a change of party — for the new team to come in and use the term 'repudiation.' But to come in and assume that everything their predecessors did was wrong, you know, they throw the baby out with the bathwater, basically, and they overcorrect in another direction," she said in a Hudson Institute forum.

The Defense Department is one of three Cabinet agencies — the others being Treasury and Veterans Affairs — that have never been led by a woman. Some of the 28 men who have held the top defense job since it was created in 1947, including three who served in Trump's administration — Jim Mattis, Esper and current acting Secretary Christopher Miller — have been military veterans. Flournoy did not serve in the military.

Like Mattis and Esper, Flournoy views China as the most significant long-term challenge to American predominance on the world stage. In July, she said the United States is losing its military technological advantage over key competitors like China and that reversing this trend must be the Pentagon's top priority.

She has, however, also warned against abandoning the Middle East and instead advocates "more modest levels of continuous presence" there. As an example, she has backed a limited role in Afghanistan that focuses more on countering the terror threat and less on rebuilding the country.

"We want to reduce our commitment, but we want to do it in a way that's smart and that safeguards our interests in the process," she said in March about Afghanistan, adding that she hopes "we don't just cut and run." Trump has pushed for a full troop withdrawal from Afghanistan by the end of the year, but so far the Pentagon has no orders to do that.

On North Korea, she said in an October online forum that while nuclear disarmament should remain the ultimate goal, she finds it "hard to see" Kim Jong Un agreeing to give up all his nuclear weapons, which she said he sees as his regime's "survival card."

On Iran, Flournoy has argued for a revised approach of deterring the Islamic Republic by breaking the familiar pattern of sending more American forces to the Gulf in response to Iranian provocations, as the Trump administration did in May 2019 after what it called credible threats to U.S. interests in the region.

Flournoy is a co-founder of Westexec Advisors, a consulting firm that provides advice and geopolitical risk analysis to corporate clients. She works with a mixture of former senior government officials — including Antony Blinken, a former deputy secretary of state and currently Biden's top foreign policy adviser — and military experts such as retired Army Gen. Vincent Brooks, who led U.S. forces in Korea until 2019.

In 2007, Flournoy helped create a think tank, the Center for a New American Security.

Photos: Here's who could serve in top roles in the Biden administration

Secretary of the Treasury

Administrator of the Environmental Protection Agency

Secretary of the Interior

What started as routine wildlife assistance took an extraterrestrial turn for Utah's Department of Public Safety after officers stumbled upon a mysterious monolith. Watch here.

Biden briefing: Why his win hides a dire warning for Democrats. Get updated on politics today

Democrat Joe Biden may have produced a winning national formula, but there's another side to the story in election data. Here's a rundown of what you'll want to know about politics this coming week.

Wanda Dench and Jamal Hinton celebrated their fifth Thanksgiving on Friday in Mesa, Arizona, but there was an empty seat at the dinner table.

Chart COVID-19's daily death count. Plus, maps that show local and US impact

See for yourself how and where COVID-19 coronavirus is spreading, and how fast, in our state and nation. The U.S. averages 172,000 new cases per day and 1,529 deaths. Plus, view our easy interactive guide to protect yourself.

Fauci: US may see 'surge upon surge' of virus in weeks ahead

The top virus expert also doesn't expect current recommendations around social distancing to be relaxed before Christmas. See 9 maps and charts that show the spread, plus guides to protect yourself.

Is the election over yet? As court battles dwindle, here's a timeline for transition

President Donald Trump’s lawyers suffered another defeat in court Friday but they vowed to appeal to the Supreme Court. How much longer do they have? View a timeline and catch up on where matters stand.

Keep the mask: A vaccine won't end the virus crisis right away. Here's the latest.

Despite the expected arrival of COVID-19 vaccines in just a few weeks, it could take several months — probably well into 2021 — before things get back to something close to normal in the U.S.

How might Americans expect to live in the next six to nine months? How should we behave? And what should the next administration do? Here are some answers from Dr. Fauci.

How can I stay safe while shopping? 25 common virus questions answered

Plus: How can you tell the difference between COVID-19 symptoms and the regular flu? Get facts and answers here that help you safely enjoy the holiday season.

Virus basics: These 5 interactive guides can keep you safe and well

From recognizing symptoms to making your own face mask, these guides will help protect you throughout the pandemic. Plus, who will get the vaccine first and how it will roll out.

Demand for real Christmas trees up during pandemic

Demand for real Christmas trees up during pandemic

FILE - In this Feb. 22, 2010, file photo then-Defense Undersecretary for Policy Michele Flournoy testifies on Capitol Hill in Washington before the Senate Armed Services Committee hearing on Afghanistan. Flournoy, a politically moderate Pentagon veteran, is regarded by U.S. officials and political insiders as a top choice for President-elect Joe Bide to choose to head the Pentagon. (AP Photo/Manuel Balce Ceneta, File)